Book of Mormon Central / KnoWhys
Why New Testament Words and Phrases Are in the Book of Mormon Part 7: How Often Did These Commonalities Come through the Hand of Mormon or Moroni? 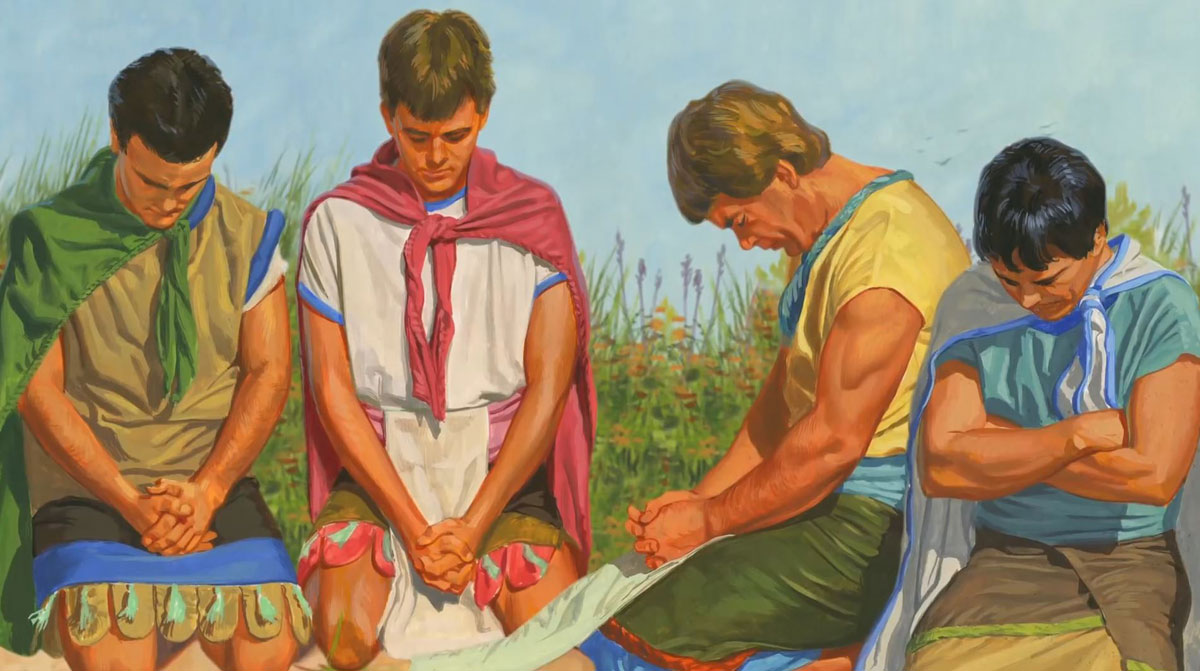 “Sons of Mosiah Praying” via Gospel Media Library
And now I, Mormon, being about to deliver up the record which I have been making into the hands of my son Moroni … And it is many hundred years after the coming of Christ that I deliver these records into the hands of my son … may God grant … that he may write … somewhat concerning Christ, that perhaps some day it may profit them

To this point in the series, several possible sources for the appearance of New Testament language in the Book of Mormon have been discussed. These include the words of the resurrected Savior Himself, ancient texts such as the Old Testament, and direct revelation from the Lord and other Divine Beings to the Nephite prophets. This Part 7 of the series will further explore the possibility that Mormon and Moroni, as they wrote and abridged much of the material that would become the Book of Mormon, added or used New Testament-type language that was available to them.

As discussed in Part 1 of this series, it is conceivable that Mormon (who lived in the 4th century after Christ), as he abridged the historical Nephite records, could have inserted into his record words or phrases that Jesus had introduced into Nephite usage during His post-resurrection ministry. Since the Nephite language or dialect seems to have changed over the centuries, perhaps even to the extent that readers in Mormon’s day could not understand some of the earlier language,1 one may assume that, on occasion, Mormon may have avoided literal copying and used instead expressions more familiar to his contemporaries (and more similar to New Testament language) so that his (and future) readers could better understand.

To cite an example of this, when Mormon relates the story of Alma and his companions embarking on their missions, he states that they separated, “taking no thought for themselves what they should eat, or what they should drink, or what they should put on” (Alma 31:37). Those words match what Jesus taught in Matthew 6:25, but Mormon had access to the same teaching from Jesus in the New World, as recorded in 3 Nephi 13:25. There are many examples of this nature that could be cited.

Additionally, it is hypothetically possible that when Mormon desired to include the Small Plates of Nephi in his record, he did not simply append them to the end of his Plates (it is not likely that the two set of plates had the same dimensions), but instead copied the words of Nephi, Jacob, and others from the Small Plates onto new plates that he created. We do not know if this was the case, but if it was, Mormon could have used later (New Testament-type) phrases from his own day as he did this.

Note, for example, the phrase “thy faith hath made thee whole,” found in Enos 1:8 (cf. Matthew 9:22). Or when Nephi states that the Messiah would be crucified, laid in a sepulcher, and then after “the space of three days he shall rise from the dead” (2 Nephi 25:13), using terms similar to, but in a reversed word order from, what is found in Mark 9:31 (where Jesus taught that after he would be killed, “he shall rise the third day”). These words would have been known to Mormon most precisely from the words of the angel to King Benjamin, prophesying that “he shall rise the third day from the dead” (Mosiah 3:10), the only other place in the Book of Mormon where these words appear. The common phrase “third day,” on the other hand, appears 36 times in the Old Testament. The idea of Jonah being in the depths of death for “three days and three nights” (Jonah 1:17) was an ancient trope, appearing also in 1 Samuel 30:12, and otherwise used in the Book of Mormon only by Alma in speaking to his sons Helaman and Shiblon about his conversion (Alma 36:10; 38:8).

Similarly, relevant to 1 Nephi 22:25, there are Jesus’s later declarations (in John 10:16 and in 3 Nephi 16:3) that “there shall be one fold and one shepherd.” It is plausible that Mormon may have been responsible for adding such New Testament verbiage into his copied/edited version of the Small Plates record.

Finally, it should be noted that some sections of the book of Ether were written by Moroni in the late 4th-century AD as his own editorial insertions, so it should not be unexpected to find “Christian” language in these sections. It is also possible that Moroni inserted Christian language into other portions of Jaredite history as he summarized, contextualized, and interpreted its narratives.

This can be seen in passages such as Ether 12:35, where Moroni comments on how the Lord will take away the Gentiles’ one “talent, yea even that which they have received” and “give unto them who shall have more abundantly,” if they do not have charity. Moroni appears to be drawing on Jesus’s teaching found in Matthew 25:28 as he adds his own editorial comments to the Book of Ether. The word “talent” would have been understood to the Nephites, as this term for a large ingot of precious metal appears 49 times, in Old Testament books from Exodus to Zechariah, and Jesus spoke to the Nephites multiple times about the Gentiles, in 3 Nephi 15–26 and probably on other occasions as well.

In Ether 8:15, Moroni’s narration of the story of Akish revealing secret oaths that were handed down from Cain, Cain is referred to as “a murderer from the beginning” (Ether 8:15). Later, in his own comments on Akish’s story, Moroni uses that same phrase again, in reference to the devil teaching men to murder (Ether 8:25). Jesus also called the devil “a murderer from the beginning” (John 8:44), and Moroni  possibly became aware of Jesus’s terminology from such things that Jesus said, or Moroni may be thinking of the words in Helaman 6:29, describing how the devil put into the heart of Cain and Gadianton the desire to carry on the work of darkness and secret “murder” from “the beginning.”

The father and son pair of Mormon and Moroni is largely responsible for the words written upon the gold plates that were delivered to and translated by Joseph Smith, Jr. If there was “Christian” or New Testament-type language in that Nephite record (as opposed to it only coming in at the level of the English translation), then readers should likely consider Mormon and Moroni, who were both highly familiar with all the teachings and revelations of Jesus available (including many beyond those recorded in 3 Nephi), to be the sources for much of that language.

Especially when New Testament words and phrases are found in books outside of 3 Nephi and in text that is not clearly a direct revelation from God, but simply narrative or dialogue, it is very possible that such language is coming from these two final authors and abridgers of the Book of Mormon, who were deeply steeped in the words and teachings of Christ. Moroni, when he wrote what would be the “title page” of the Book of Mormon, expressly stated that one of the key purposes of the book they had prepared was for “the convincing of the Jew and Gentile that Jesus is the Christ, the Eternal God, manifesting himself unto all nations.” What better way to fulfill that mission than by filling the pages of their record with the words, teachings, and revelations of Jesus Christ!2

Book of Mormon Central, “Why New Testament Words and Phrases Are in the Book of Mormon Part 7: How Often Did These Commonalities Come through the Hand of Mormon or Moroni? (Words of Mormon 1:1–2),” KnoWhy 537 (October 24, 2019).