Did a “Magic World View” Influence the Coming Forth of the Book of Mormon? 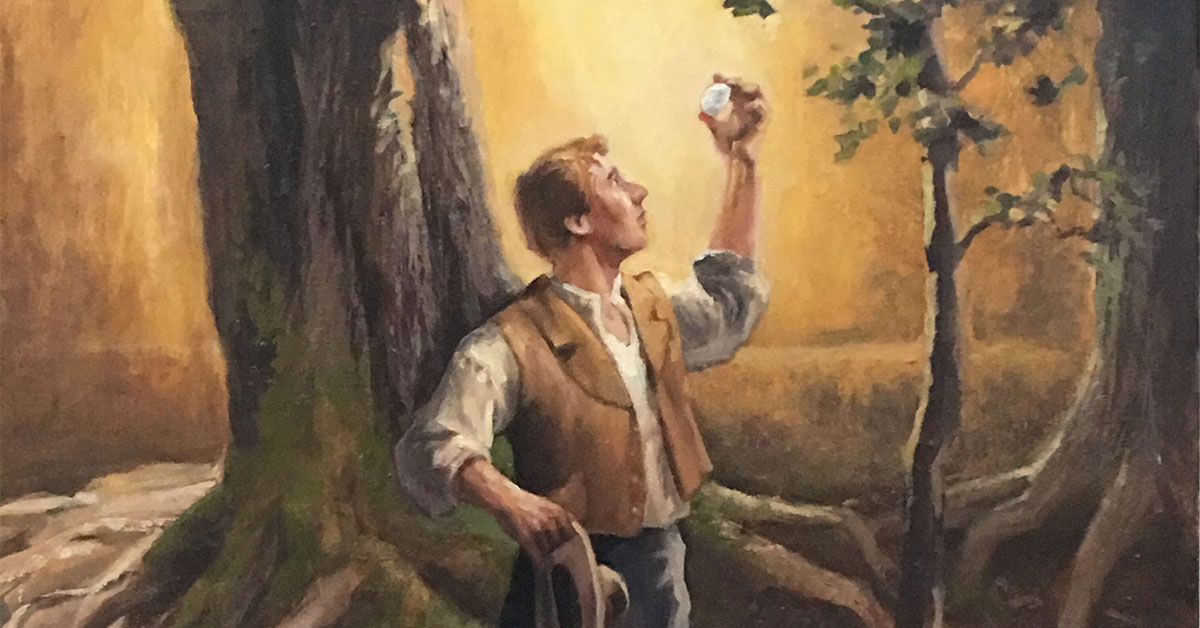 In an editorial published in July 1838, Joseph Smith responded to some common questions circulating about him and the beliefs of members of the restored Church of Jesus Christ. One of the questions asked, “Was not Jo Smith a money digger,” meaning somebody who was hired to locate buried treasure. To this, the Prophet answered ironically, “Yes, but it was never a very profitable job to him, as he only got fourteen dollars a month for it.”1

This quip highlights one of the common questions many people have asked about Joseph Smith: how much did a “magic world view” influence the Prophet and his account of the coming forth of the Book of Mormon? Even in his own lifetime, Joseph faced accusations of being embroiled in superstition and “folk magic” from skeptical neighbors and adversaries.2 Today historians debate the extent to which Joseph and his family participated in early nineteenth-century folk magic culture and what this participation may have meant for Joseph personally and as the leader of a new religious movement.3 Some have argued that the young Joseph was deeply influenced by this “magical” culture that saw legitimacy in the use of “magical” devices such as divining rods and seer stones. According to these scholars, the coming forth of the Book of Mormon can be seen, in part, as the direct result of Joseph participating in this “magic world view.”4

Others, however, have argued for a nuanced view that, for example, calls into question the common terminology (“magic,” “magical”) historians today use to describe the folk practices in which Joseph and the Smith family sometimes participated.5 The main problem with this language is that it is too easy to manipulate. As one scholar has written, “The plasticity of magic, its pliable and permeable nature, has made the concept readily adaptable as a polemical and ideological tool, especially when coupled with the long-standing stigma attached to the notion.”6 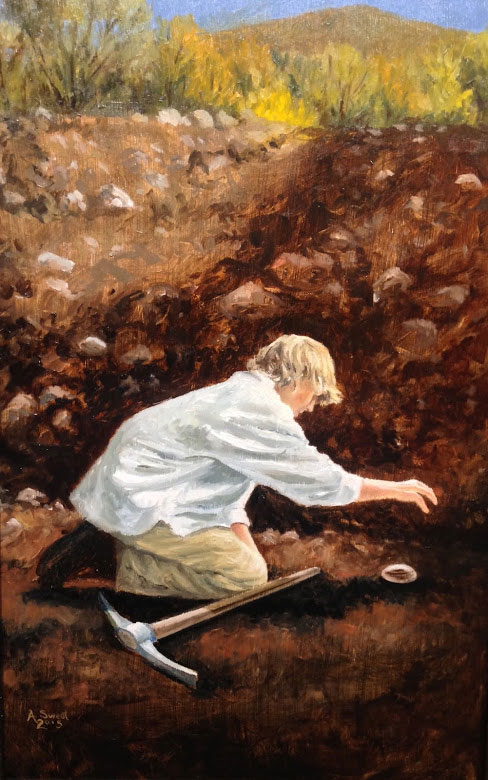 Still, others dispute that “folk magic,” as it is commonly defined, played any prominent a role in the foundational claims of Joseph Smith.7 Whatever the case, some practices, such as the use of crystals or other stones to channel miraculous visionary experiences, which some scholars call “magical,” were not necessarily seen by early nineteenth-century American Christians as incompatible with biblical faith or ordinary life.

“Seeing” and “seers” were part of the American and family culture in which Joseph Smith grew up. Steeped in the language of the Bible and a mixture of Anglo-European cultures brought over by immigrants to North America, some people in the early 19th century believed it was possible for gifted individuals to “see,” or receive spiritual manifestations, through material objects such as seer stones.

The young Joseph Smith accepted such familiar folk ways of his day, including the idea of using seer stones to view lost or hidden objects. Since the biblical narrative showed God using physical objects to focus people’s faith or communicate spiritually in ancient times, Joseph and others assumed the same for their day. Joseph’s parents, Joseph Smith Sr. and Lucy Mack Smith, affirmed the family’s immersion in this culture and their use of physical objects in this way, and the villagers of Palmyra and Manchester, New York, where the Smiths lived, sought out Joseph to find lost objects before he moved to Pennsylvania in late 1827.8

According to this way of thinking, classifying certain practices as “magical” as opposed to “religious” runs the risk of imposing modern views on people of the pre-scientific past, when they may well not have conceptualized their behavior or activity in such a binary way.9 As Richard Bushman, one of Joseph Smith’s leading biographers, has recently observed, looking closely at historical folk practices, it is clear that for nineteenth-century Yankees, like the Smith family,

magic and Christianity did not seem at odds with one another. The combination was altogether too common in the nineteenth century for it to invalidate Joseph Smith’s more conventional religious claims. [For early Latter-day Saints] and for many Christians, folk traditions and religion blend. To call the two incongruous seems more like a matter of religious [or ideological] taste than a necessary conclusion.10 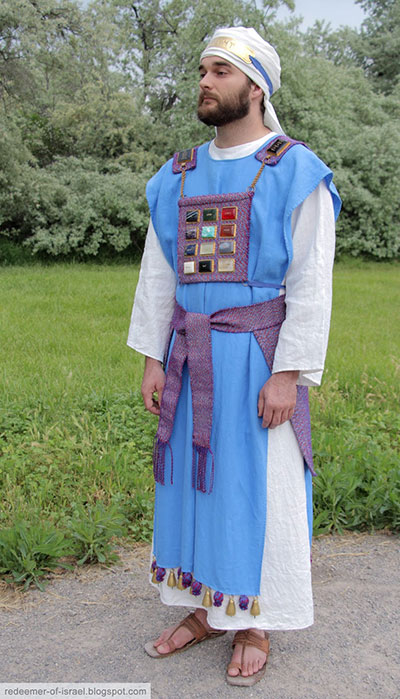 Recreation of Israelite High Priest endowed with the priestly vestments containing the Urim and Thummim. Image by Daniel Smith.

Or, as historian Wouter J. Hanegraaff has put it, there is no real meaningful distinction between “religion” and “magic” when writing about history. Any attempt to make this distinction “belongs to the domain of theological polemics . . . and cannot claim any scholarly foundation.”11

Historians have also recently pointed out that the extent of Joseph Smith’s involvement in folk magic during his youth, or at least the influence such had on the young seer, may have been exaggerated over the years due to authors uncritically repeating outdated or questionable arguments. As Bushman in 2016 has written,

At present, a question remains about how involved Joseph Smith was in folk magic. Was he enthusiastically pursuing treasure seeking as a business in the 1820s, or was he a somewhat reluctant participant, egged on by his father? Was his worldview fundamentally shaped by folk traditions? I think there is substantial evidence of his reluctance, and, in my opinion, the evidence for extensive involvement is tenuous. But this is a matter of degree. No one denies that magic was there, especially in the mid-1820s. Smith never repudiated folk traditions; he continued to use the seer stone until late in life and used it in the translation process. It certainly had an influence on his outlook, but it was peripheral—not central. Biblical Christianity was the overwhelming influence in the Book of Mormon and the Doctrine and Covenants. Folk magic was in the mix but was not the basic ingredient.12

However, in addition to the clear biblical (Judeo-Christian) precedent for the use of stones and other instruments as a means to channel divine power,15 the use of stones or crystals as instruments of revelation is a widely-documented practice. For example, such aids were used among the ancient and modern Maya of Mesoamerica in divination practices.16 Some Bible scholars believe that the biblical Urim and Thummim, which was worn by the high priest of ancient Israel, was a precious stone, and perhaps was used like the crystal balls and seer stones found in later European tradition.17 The argument that mentions of such stones or tools in the Book of Mormon must be a reflection of the supposed “magic world view” of Joseph Smith’s early nineteenth-century American environment can therefore be reasonably questioned. 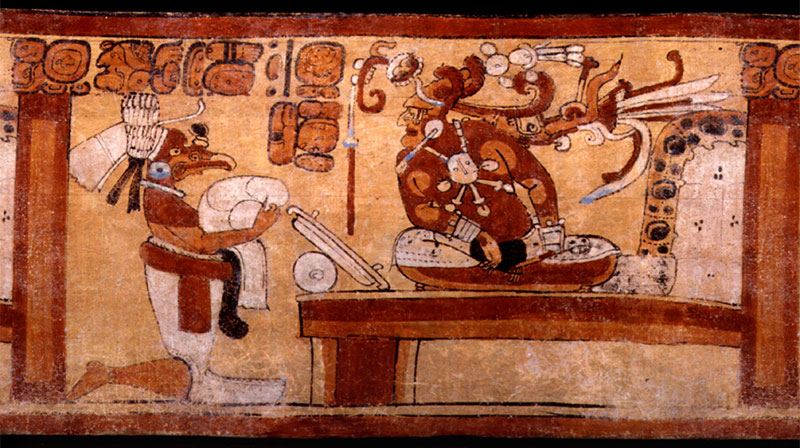 Roll-out of Classic Maya polychrome vase K5764 detailing possible use of a scrying mirror. Image via the Maya Vase Database.

Repeatedly and insistently, Joseph Smith testified throughout his prophetic ministry that the Book of Mormon came forth and was translated by the gift and power of God. In his now-famous 1842 editorial titled “Church History,” for instance, the Prophet testified, “Through the medium of the Urim and Thummim I translated the [Book of Mormon] by the gift, and power of God.”18 Similar language appears in the preface to the 1830 edition of the Book of Mormon and in the appended “Testimony of Three Witnesses.”19 Whatever folk practices Joseph and his family may have participated in, especially in his younger years, the documentary record is crystal clear that the Prophet fundamentally saw his work in bringing forth the Book of Mormon and restoring the Church of Jesus Christ as a divine, sacred calling, not “magical” legerdemain,20 even if it may have taken Joseph time and angelic tutelage to help him fully realize the significance of his prophetic calling.21

Of course, Book of Mormon prophets and authors themselves understood the coming forth of their words “from the dust” as a sign of God’s miraculous power in the latter days (Moroni 10:27). Nephi, for instance, likened the words of Isaiah about the Lord doing “a marvelous work among this people, yea, a marvelous work and a wonder” to describe the coming forth and translation of the Book of Mormon in modern times (2 Nephi 27:26; cf. Isaiah 29:14). This phrase from Isaiah (“marvelous work and a wonder”; from the Hebrew root plʾ; “extraordinary,” “wonderful,” “miraculous”) that Nephi drew upon acts as a parallelism that emphasizes how God would accomplish a work so remarkable and explanation-defying that it would confound the wisemen of Israel (“for the wisdom of their wise men shall perish, and the understanding of their prudent men shall be hid”). What better way to describe the inspired translation of the Book of Mormon by “an unlearned youth,”22 a feat which still today defies secular or naturalistic explanation.23

Additional insight and more information on this topic may yet be forthcoming; for now, we indeed “know [only] in part” and still “see through a glass, darkly” (1 Corinthians 13:9, 12). As Bushman astutely observed, when encountering challenging information about the past, including the early life of Joseph Smith and the coming forth of the Book of Mormon, “we need to keep in mind that the wheels of history grind slowly, but they grind exceeding fine. What seems central at one moment in time will lose force as the years go by.” Using specifically the example of Joseph Smith’s folk practices, Bushman recognized that with careful and more thorough scholarship “magic [has] moved to the sidelines over the years,” and thus wonders “will other issues be next? We should be careful about putting too much weight on the criticisms of the moment when it is uncertain how enduring they will be.”24

This KnoWhy was made possible by the generous contributions of Arlo & Jackie Luke.