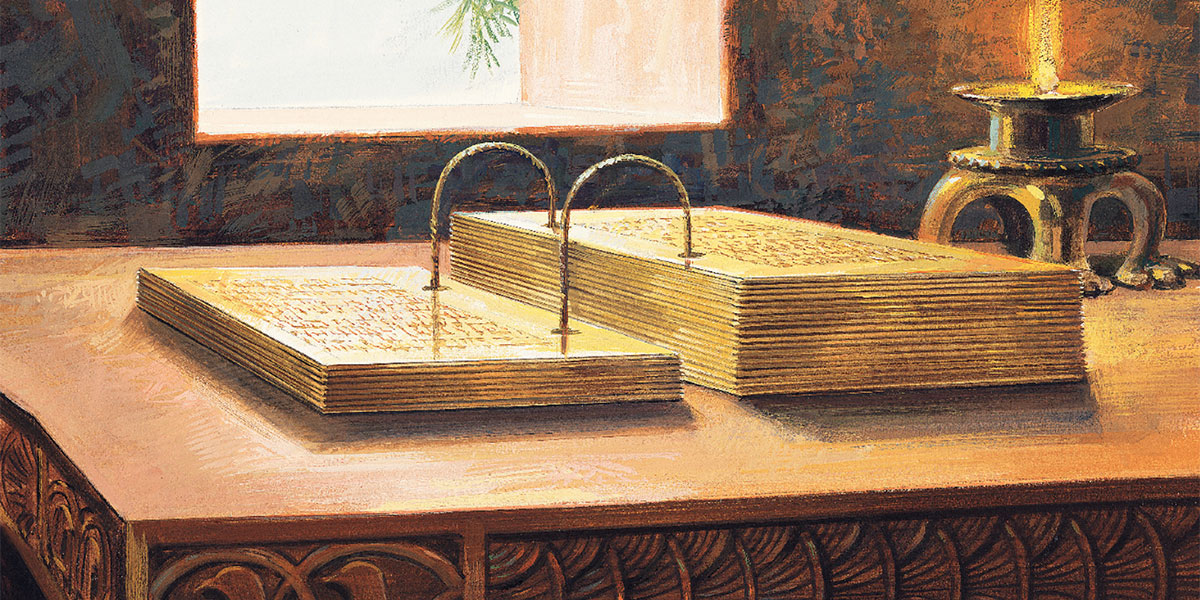 A painting depicting gold plates by Jerry Thompson. Image via Gospel Media Library.
“Wherefore, it is an abridgment of the record of the people of Nephi, and also of the Lamanites … An abridgment taken from the Book of Ether also.”

The total amount of history that the Book of Mormon’s primary editors were working with must have been quite vast. Mormon and other prophets said they couldn’t include even a “hundredth part” of what had transpired among their people.1 Mormon also clues readers into the diverse nature of the underlying records that he was working with. At one point he explained that “there are many books and many records of every kind, and they have been kept chiefly by the Nephites” (Helaman 3:15). Some of these underlying records were summarized; others were quoted, in whole or in part, quite distinctively.

What were these different records? Anthropologist John L. Sorenson has conducted a careful analysis of the Book of Mormon’s source texts, comparing them to known record-keeping practices in ancient Mesoamerica. Based on his analysis, he proposed that the Book of Mormon’s underlying documents likely include the following categories:2

With admirable skill, Mormon and Moroni drew from these various historical records to create the final text—the abridged version of Nephite and Jaredite history as we know it.3 While the Book of Mormon may sometimes feel like a continuous story, the evidence of its being compiled from various sources is pervasive. Readers frequently encounter editorial commentary, discussions of source texts, adjustments in time or location, changes in genre, calculated variations in the amount of provided details, shifts between first and third person voices, telltale seams at points where one record was spliced into another, and other signs that the editors were weaving in and out of source materials.4 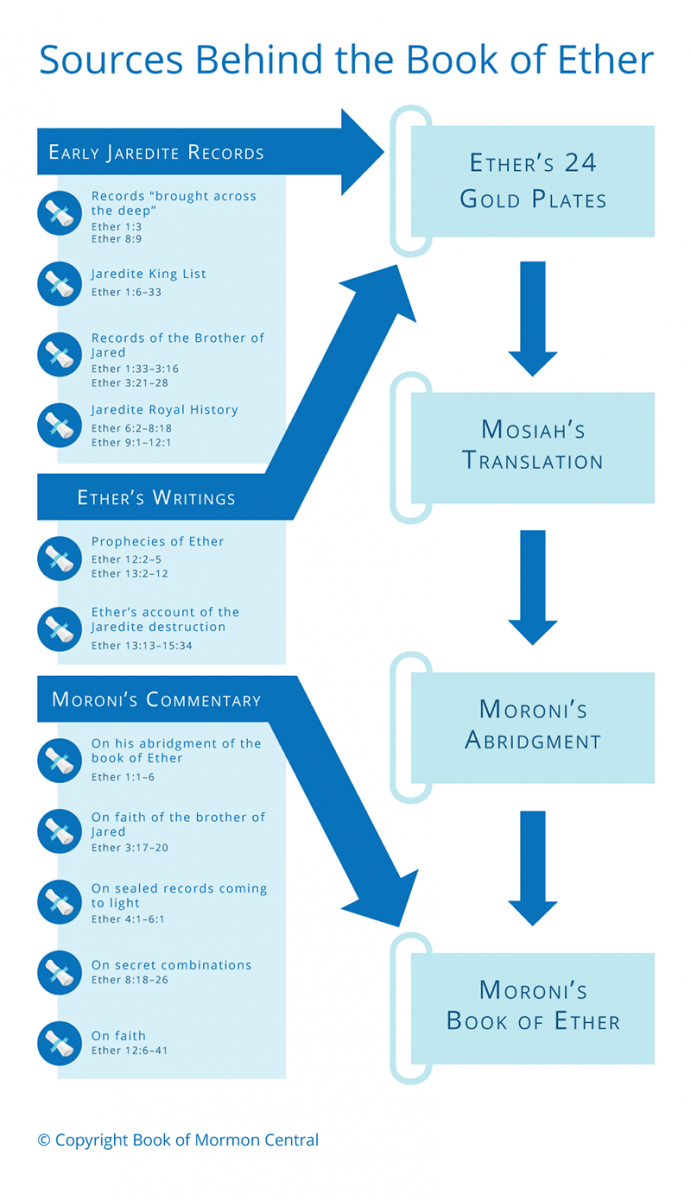 Sometimes the sources are directly mentioned. For instance, in Helaman 2:13–14  Mormon said that the “book of Helaman” which he was currently drawing from was part of a larger history known as the “book of Nephi.” Moroni similarly explained, “I take mine account from the twenty and four plates which were found by the people of Limhi, which is called the Book of Ether” (Ether 1:2).5

On other occasions, identifying the underlying sources can be more complicated. For instance, readers may wonder how the specific details of Abinadi’s lengthy trial before King Noah and his priests (Mosiah 11–17) ever made it into Nephite history. As legal scholar John W. Welch has commented, “It is not entirely certain who spoke, reported, wrote, compiled, edited, or abridged the materials in Mosiah 11–17 as we now have them, or why these original reports or records were created. Yet it makes a difference who wrote this account and why.”6

After thorough analysis, Welch suggested that the record was likely derived from a combination of sources: Alma the Elder’s recollection of the trial, perhaps some of Alma’s followers who attended the trial after Alma was cast out, Limhi’s royal record of the trial, perhaps Ammon’s recollections from his time among Limhi’s people, and finally from Alma the Younger, who was “in a prime position to preserve, structure, and promote the story of Abinadi as it has come down to us today.”7

If Alma the Younger was truly the record’s primary architect before Mormon included it in his abridgment, that can influence how readers might interpret the record’s various themes. As Welch explained, the account of Abinadi’s trial meaningfully functions “as a prologue and rationalization for the ascendancy of Alma the Younger as the premier leader in the united land of Zarahemla.”8 Alma the Younger’s position as a chief judge might also explain why the details of the trial were discussed in such great depth—depth that Mormon, as a military commander, may not have included on his own.9 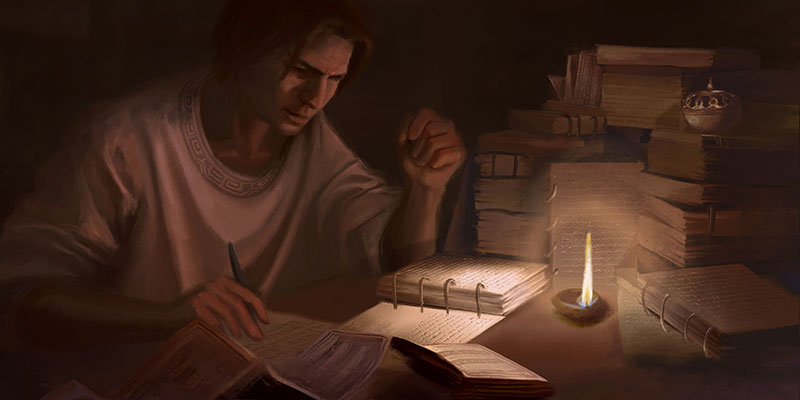 Words of Mormon by Normandy Poulter and the BYU Virtual Scriptures Group. Used with permission.

As these types of insights demonstrate, readers can benefit from frequently asking themselves why Mormon and Moroni included specific sources in the Book of Mormon’s final abridgment. Every narrative, sermon, prophecy, historical summary, letter, legal trial, military account, dialogue, or other type of source document was surely chosen for specific reasons.

Literary scholar Grant Hardy has noted that it is also “instructive to track how [Mormon] integrates documents into his narrative—where he places them, how he sets the scene for firsthand accounts or follows up on them later, whether they move forward or disrupt particular story lines, and whether they reinforce or call into question themes in the main narrative.”10 This type of attention to editorial choices and activities can lead to profound insights about the Book of Mormon’s source texts and the prophetic editors who drew upon them.

At the same time, such analysis can help strengthen a reader’s faith in the Book of Mormon’s historical authenticity.11 Hardy described the “Book of Mormon, with its multiple records, plates, writers, and editors, [as] anything but a naïve, straightforward narrative.”12

Its embedded documents are diverse, complex, and intricately fitted together for intelligent purposes. Simply trying to keep track of the mentioned source texts can be a chore for readers, yet the editors’ dutiful explanations of these records are consistent.13 In addition, subtle clues about undisclosed source documents, when pieced together through careful analysis, reveal realistic layers of textual strata that would be difficult for any author—especially one as uneducated and inexperienced as Joseph Smith—to fabricate.14

Readers can be confident, in light of such evidence, that the Book of Mormon is exactly what it claims to be—an abridgment of various ancient records. It condenses nearly 1,000 years of Nephite history and approximately 2,500 years of Jaredite history15 into a unified record that boldly and relentlessly testifies of Jesus Christ.16 Exploring how each of the Book of Mormon’s source texts individually contributes to the book’s primary message about Christ can be intellectually enlightening, spiritually satisfying, and ultimately faith promoting.