Did Jesus Bleed from Every Pore? 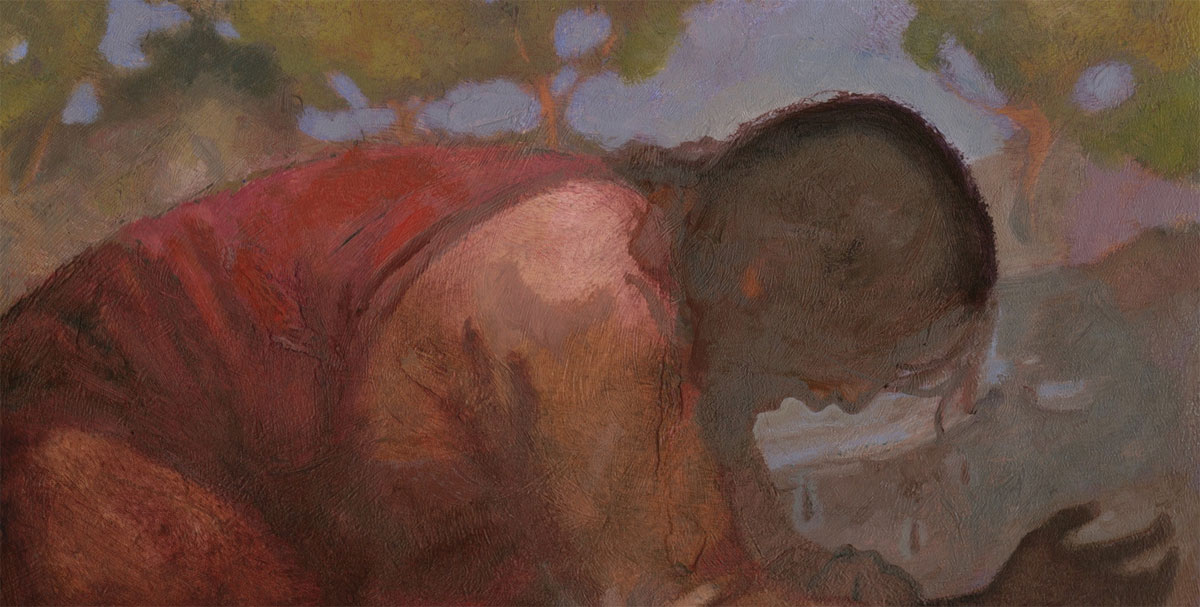 Gethsemane by J. Kirk Richards.
“For behold, blood cometh from every pore, so great shall be his anguish for the wickedness and the abominations of his people.”

In his memorable speech, King Benjamin quoted words delivered to him by an angel concerning the coming of Jesus Christ and the infinite Atonement he would perform: “And lo, he shall suffer temptations, and pain of body, hunger, thirst, and fatigue, even more than man can suffer, except it be unto death, for behold, blood cometh from every pore, so great shall be his anguish for the wickedness and the abominations of his people” (Mosiah 3:7).

The angel’s prophecy of what Jesus would suffer appears to anticipate a similar detail recorded in the gospel of Luke: “And there appeared an angel unto him from heaven, strengthening him. And being in an agony he prayed more earnestly: and his sweat was as it were great drops of blood falling down to the ground” (Luke 22:43–44). In evaluating the Lucan passage, there are two key points of disagreement among New Testament scholars.

The medical condition of Bleeding "from every pore" 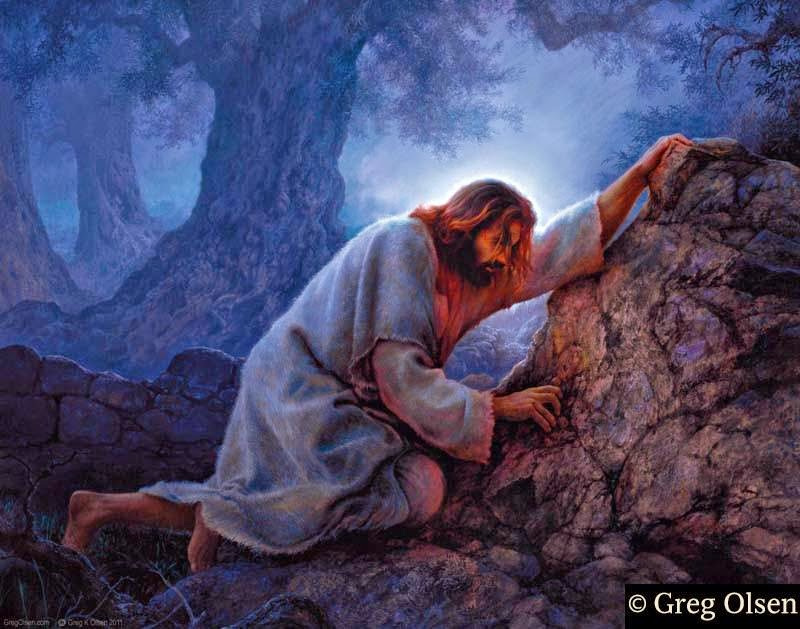 No Greater Love by Greg Olsen

First, it is not clear what these words might mean. Many scholars have read this passage in Luke as describing the rare but documented medical phenomenon known as hematohidrosis (or haimatidrosis). This “very rare condition” causes “an individual to sweat blood,” and may be caused by, among other things, “extreme levels of stress” and “excessive exertion.”1 Is this what Luke meant by “drops of blood” (thromboi haimatos)? Hematohidrosis has been observed among soldiers preparing to enter battle and prisoners facing execution.2 The common factor among these unusual cases is an unbearable amount of mental stress that comes from the anticipation of imminent pain and death, something the Gospels report Jesus experienced in Gethsemane (Matthew 26:37–38; Mark 14:33–34).3 This strengthens the likelihood that Luke was describing hematohidrosis.

There are, however, other ambiguities in the Greek text of this passage. For example, the Greek particle hōsei (as if, as though, as it were, as, like, etc.) used in v. 44 can denote several kinds of approximation or equivalence. It’s not entirely clear from the Greek text alone if Jesus was sweating normal sweat as if he were profusely bleeding or if the sweat was actual blood, and so scholars are divided on how to interpret this language.4 Most New Testament scholars read hōsei in v. 44 as introducing a simile (Jesus was sweating so profusely it was as if he were bleeding), although a minority of scholars have argued for the passage describing actual haimatidrosis, or blood being secreted (Jesus literally sweat blood).5 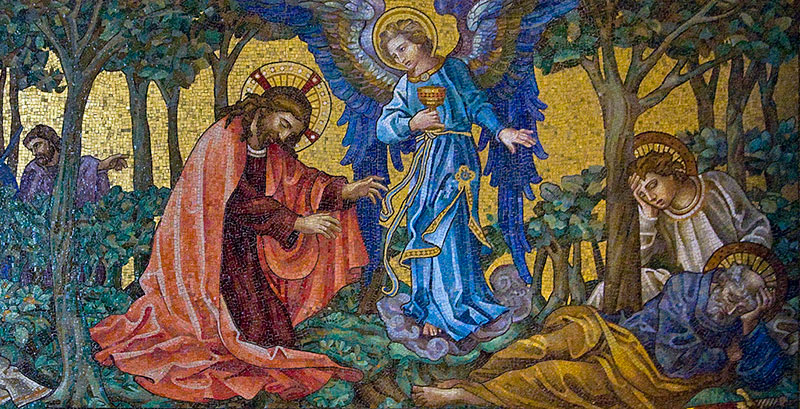 Mosaic detail from the Grenadier Guards chapel in London. Photo by Lawrence OP via Flickr.

The second issue within this passage are problems with its textual history.6 While the imagery in Luke 22:43–44 certainly is striking, biblical scholars have come to question its authenticity or originality to Luke’s gospel based on evidence from ancient manuscripts.7 Why might these verses be absent from some of the earliest manuscripts of Luke? As two notable New Testament scholars have suggested:

These verses [Luke 22:43–44] are absent from some of the oldest and best [New Testament manuscripts]. . . . It is striking to note that the earliest witnesses attesting the verses are three Church fathers – Justin, Irenaeus, and Hippolytus – each of whom uses the verses in order to counter Christological views that maintained that Jesus was not a full human who experienced the full range of human sufferings. It may well be that the verses were added to the text for just this reason, in opposition to those who held to a [heretical] Christology [that Jesus was not fully human as well as fully God].8

Another scholar has hypothesized that even if these verses were not original to Luke, they may still have been historically accurate, having “been drawn from some floating tradition which had not found its way into” the original text.9

More recent work by Latter-day Saint scholars has reinforced the plausible authenticity of these verses in Luke’s gospel both on manuscript grounds as well as for linguistic reasons,10 as scholar Thomas A. Wayment has summarized:

These two verses are greatly disputed, and a number of important ancient manuscripts omit them. Other early and important manuscripts include these verses. Given the current evidence, it is unlikely that the question of their omission or inclusion can be resolved. However, the evidence is strong enough to suggest that they may be original to Luke’s Gospel but were perhaps omitted over doctrinal concerns.11

In other words, based solely on the manuscript evidence and the understandings of ancient Christian writers, while the matter of whether these verses are original to Luke’s gospel cannot be fully resolved at the present time, there are, however, enough reasons for one to cautiously accept their factual authenticity while still being aware of their questionable textual status. 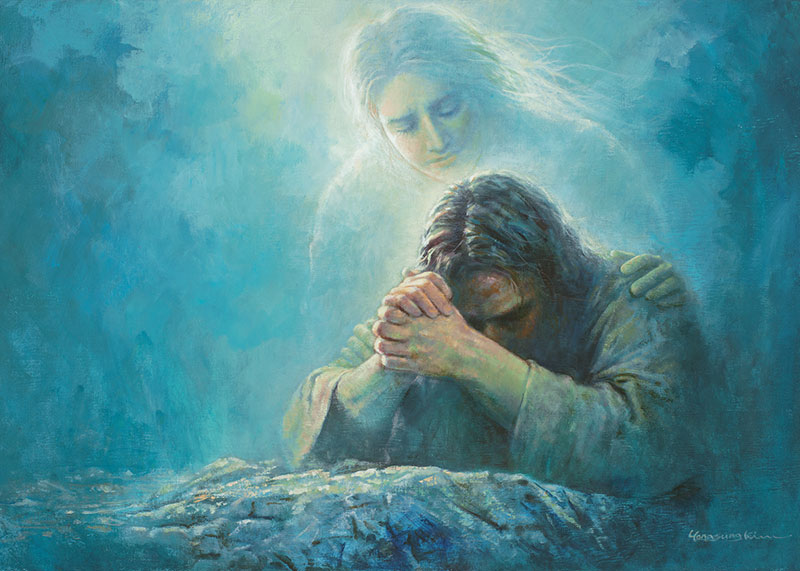 The issues surrounding the authenticity of Luke 22:43–44 and whether Jesus sweat actual blood or merely sweat as though he were bleeding will likely remain open to debate among biblical scholars for many years to come. Latter-day Saints, however, have additional scriptures that tip the scales in favor of these verses being authentic and also describing a real physiological phenomenon. The Book of Mormon clearly describes Jesus sweating blood “from every pore” (Mosiah 3:7). So too does the Doctrine and Covenants, in which Jesus himself speaks of having suffered so intensely that it “caused [himself], even God, the greatest of all, to tremble because of pain, and to bleed at every pore” (Doctrine and Covenants 19:18). Restoration scriptures therefore help clarify some of the ambiguities in Luke’s gospel described above.12

On the other hand, neither the Book of Mormon nor the Doctrine and Covenants explicitly say Jesus would sweat blood in Gethsemane as appears to be portrayed in Luke. Rather, both texts merely say Jesus bled from every pore during his performance of the Atonement, a process that commenced in Gethsemane but culminated with Jesus’ death and resurrection. While his most intense shedding of atoning blood is associated most often with Jesus’s struggle or battle (the agōnia) mentioned in connection with Gethsemane in Luke 22:43–44,13 the bleeding from every pore in Mosiah 3 and Doctrine and Covenants 19 might in some way also be including the exquisitely cruel physical torment inflicted on Jesus during his heavy scourging and violent crucifixion (Matthew 27:26; Mark 15:15; John 19:1). All of this gruesome suffering occurred in only a few hours. While there is no mention of Jesus’ clothing being stained with blood during his arrest and trial, which is odd if he had indeed bled freely from every pore in Gethsemane,14 it seems most likely that the three main scriptural passages reviewed above speak of Jesus bleeding profusely in Gethsemane.

What stands unambiguously clear is that Restoration scripture and latter-day prophets have testified, alongside the New Testament gospels, that Jesus endured unimaginable pain as He performed the infinite atoning sacrifice (Alma 7:11–13; D&C 19:18; 122:5–8). As Elder Jeffrey R. Holland testifies, despite His suffering and feelings of being “totally, abjectly, hopelessly alone,” the Savior triumphed:

Jesus held on. He pressed on. The goodness in Him allowed faith to triumph even in a state of complete anguish. The trust He lived by told Him in spite of His feelings that divine compassion is never absent, that God is always faithful, that He never flees nor fails us. When the uttermost farthing had then been paid, when Christ’s determination to be faithful was as obvious as it was utterly invincible, finally and mercifully, it was “finished.” Against all odds and with none to help or uphold Him, Jesus of Nazareth, the living Son of the living God, restored physical life where death had held sway and brought joyful, spiritual redemption out of sin, hellish darkness, and despair.15

Mark Elbert Eastmond, “Gethsemane and Golgotha: The Book of Mormon's Illumination on the Hours of Atonement,” The Fulness of the Gospel: Foundational Teachings from the Book of Mormon (Provo, UT: Religious Studies Center, 2003), 91–110.