How Did Christ Use the Nephite Prophetic Worldview? 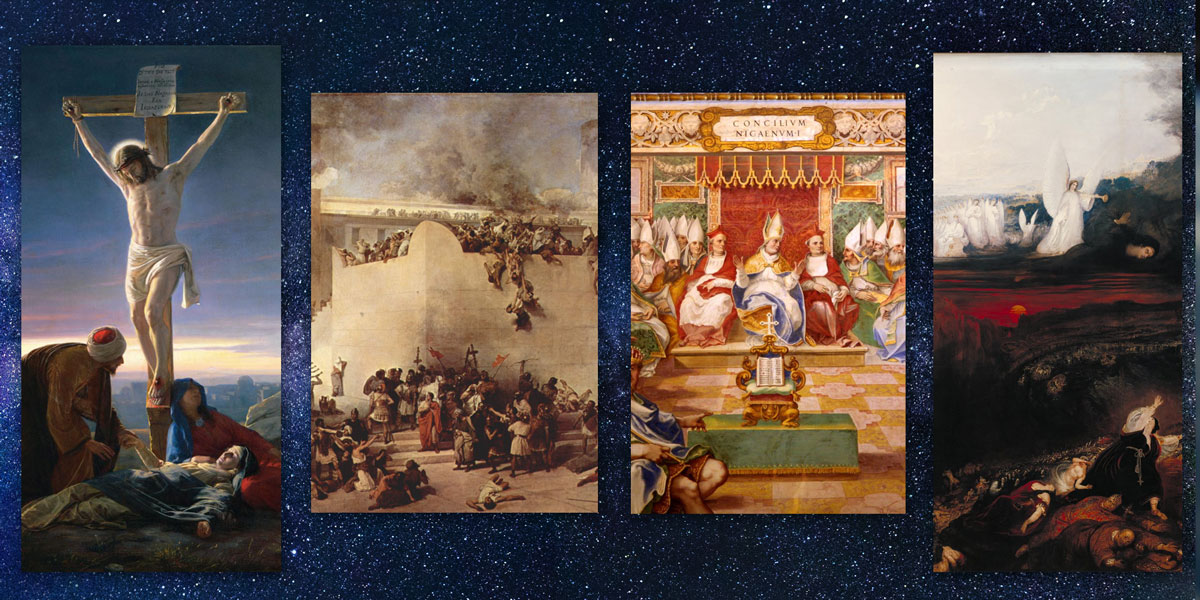 The Four Stages of the Nephite Prophetic Worldview: Christ's Coming, Scattering of the Jews, Day of the Gentiles, and Final Victory. Image by Book of Mormon Central.
“Then shall their watchmen lift up their voice, and with the voice together shall they sing; for they shall see eye to eye.”

As Nephi and his younger brother Jacob laid the foundation of the Nephite prophetic tradition, they appear to have developed and regularly used a four-fold framework (based on Nephi’s sweeping vision in 1 Nephi 11–14) for understanding and interpreting their place in God’s future plan, and interpreting scripture. John W. Welch has referred to this as the “Nephite Prophetic View,” and he has identified the four-stages of this prophetic worldview as:

According to Welch, this four-stage pattern strongly influenced and shaped Nephi’s and Jacob’s selection and interpretation of the materials they quote from Isaiah.2

In light of this established foundation, it is not surprising that when Jesus came and spoke to the Nephites, He likewise used the Nephite prophetic worldview together with quotations from Isaiah to add “details, confirmations, and fulfillments to this same overall prophetic expectation,” since it would have been known among the people at Bountiful.3 In 3 Nephi 15–16 and 3 Nephi 20–25, the Savior built on relevant themes found in the Nephite prophetic view, as He quoted from Isaiah on both His first and second days in Bountiful.

In 3 Nephi 15, Jesus began by explaining that with His coming and through His sacrifice, the law of Moses was fulfilled and “old things had passed away, and that all things had become new” (3 Nephi 15:1–10). He thus briefly touched on stage 1 by emphasizing the fulfillments and implications His coming had for Nephite religious practice going forward.

Jesus then explained that knowledge about the Nephites and the rest of scattered Israel had been kept from those at Jerusalem, due to their unbelief (3 Nephi 15:11–16:3). Jesus also declared that the Nephites were part of the “other sheep,” only passingly spoken of in the New Testament (John 10:16).

That allusion to the topic of scattering in stage 2 set the stage for the Savior’s detailed discussion of the future “day of the gentiles.” In that day, Jesus assured His Nephite audience that their record, the Book of Mormon, would go forth to the Gentiles, many of whom would be blessed for their belief in Christ (3 Nephi 16:4–6). However, eventually, wickedness would prevail among the unbelieving Gentiles, who “sin against my gospel.” They shall become like salt that lost its savor and be trodden under foot (3 Nephi 16:7–15). The Savior then quoted Isaiah 52:8–10 (3 Nephi 16:18–20).4

On the second day of Christ’s ministry among the Nephites, He returned to the Nephite prophetic worldview and focused extensively on the pivotal final events of stage 4. As Welch effectively summarized:

Twice he quoted Isaiah 52:7–8, about the “watchmen” who shall lift up their voices in a day of fullness and how Jesus will be the primary messenger who will announce deliverance to the Israelites, and they will know how beautiful his feet are. He also quoted all of Isaiah 54 about the end of times when the barren or childless woman (symbolizing the church during the Great Apostasy) will be comforted, will become fruitful, and will enlarge and richly adorn her tent (or tabernacle) with seed (children) who will eternally inherit. Other themes of glory and the building of Zion are introduced that pertain especially to the converted Nephites. And he concluded by quoting Malachi 3–4 about the earth not being wasted at his final coming.5

Just as recognizing this pattern elucidates the quotation and interpretation of Isaiah by Nephi and Jacob in the early years of the Nephite experience, it likewise offers insight and improved understanding of the Savior’s teachings at Bountiful. It shows that when teaching the Nephites, the Savior “taught them within the traditional framework of the four stages of the Nephite prophetic worldview.”6 This was a pattern first established by the Lord Himself, as He unveiled the future to Nephi in four discrete phases (1 Nephi 11–14). Since it had become an archetypal pattern used by the Nephite prophets, it made sense for the Lord to draw on that pattern again here, to contextualize His teachings in a familiar way for His Nephite audience, thus maximizing their capacity to comprehend and interpret His teachings correctly.

Yet He did not conform to this pattern in a rigid way. He adapted it to fit His audience’s present circumstances and the information that was most pressing to communicate to them. As Welch noted, “By the time of 3 Nephi, the first two of these four stages had already been fulfilled.”7 As such, He only briefly touched on stages 1 and 2, and did so in order to set the stage for His teachings about stage 3.

He also waited until the second day, when He was “speaking to a more spiritually prepared people” to emphasize stage 4.8 According to Welch, “It is clear here that Jesus taught those who needed to know only after they were spiritually prepared to understand these sublime materials.”9 In that setting, the Savior could justifiably hope that His audience could understand what He was talking about, even though He appreciated that they were “weak” and could not immediately understand all the words that He was “commanded of the Father to speak” (3 Nephi 17:2).

Thus, having just quoted Isaiah 52, Jesus gave them a homework assignment to “go ye unto your homes, and ponder upon the things which I have said” (3 Nephi 17:3). While pondering, they likely remembered other times in their history where prophets like Nephi (see 1 Nephi 13:37; 22:10–11) and Abinadi (Mosiah 12:21–24; 15:29–31) had quoted and explained that Isaiah text. And then Jesus assured them that, by asking the Father in the name of Christ, they could “understand and prepare” themselves for all that Jesus would say the next day about that seminal passage of prophecy (see 3 Nephi 20:34–35, 41–45; 21:29) and beyond.

Thus, recognizing how the Savior both used and adapted a familiar Nephite framework for scriptural interpretation helps readers to understand better what Jesus taught the people that day and why. It also sheds light on how the Savior taught, illuminating methods of instruction that people can apply today on many occasions to better enhance Gospel learning grounded in the revealed words of God.