Why Must There Be Unity within the Presiding Quorums of the Church? 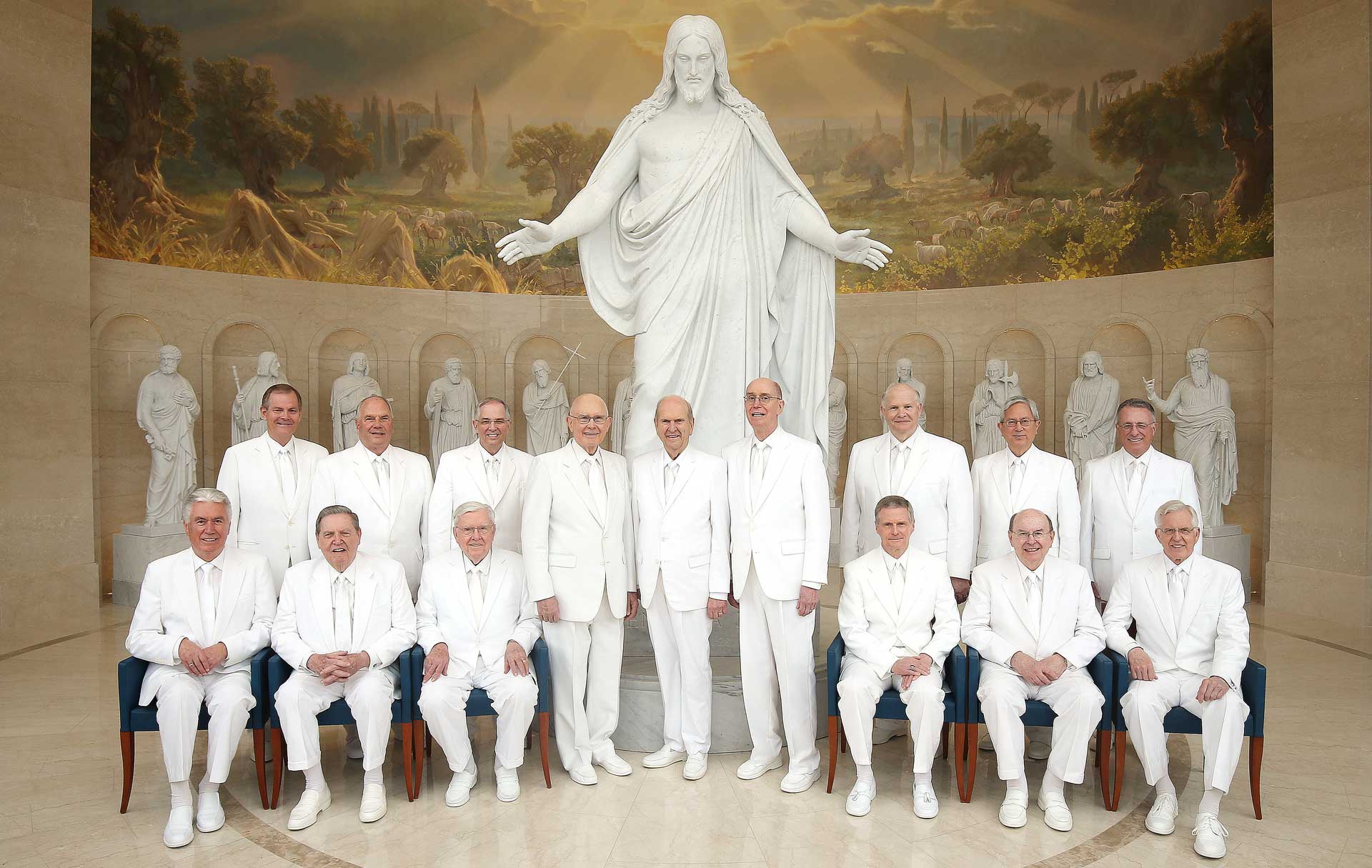 The Twelve Apostles and First Presidency of the Church of Jesus Christ of Latter-day Saints at the Rome, Italy Temple Visitor Center. Image via Church of Jesus Christ.
“And every decision made by either of these quorums must be by the unanimous voice of the same; that is, every member in each quorum must be agreed to its decisions, in order to make their decisions of the same power or validity one with the other.”

In the early years of the Church, the structure and organization of the priesthood and leadership was constantly being adapted by revelation in order to meet the needs of the rapidly growing body of Saints. Some of the most significant developments came in the early months of 1835, when both the Quorum of the Twelve and the Quorum of the Seventy were first organized.1

Soon afterward, in the spring of 1835, Joseph Smith received revelation regarding the priesthood, with special emphasis on how the new presiding quorums were to operate and work with the First Presidency (which had been previously organized in 1832) to administer to the needs of the Church. This revelation was combined with previous revelations on priesthood offices and administration to provide an up-to-date guide for the early leaders to follow. Doctrine and Covenants 107 constitutes that combined revelatory text.

After describing the organization, role, and authority of the First Presidency, Quorum of the Twelve, and Quorum of the Seventy, the revelation states that “every decision made by either of these quorums must be by the unanimous voice of the same; that is, every member in each quorum must be agreed to its decisions, in order to make their decisions of the same power or validity one with the other” (D&C 107:27).

While exceptions to this rule of unanimity can be made “when circumstances render it impossible” for all members of the quorum to gather (D&C 107:28), to this day the presiding quorums of the Church act only with a unanimous voice on all major decisions. President Gordon B. Hinckley explained that “any major questions of policy, procedures, programs, or doctrine are considered deliberately and prayerfully by the First Presidency and the Twelve together.” President Hinckley went on to say that when these quorums meet, each individual member has “total freedom to express himself, [to] consider every major question.” When it is time to make decisions, however, President Hinckley was clear:

No decision emanates from the deliberations of the First Presidency and the Twelve without total unanimity among all concerned. At the outset in considering matters, there may be differences of opinion. These are to be expected. These men come from different backgrounds. They are men who think for themselves. But before a final decision is reached, there comes a unanimity of mind and voice.2

President Henry B. Eyring witnessed this process unfold during his first time participating in a meeting with members of the Frist Presidency, Quorum of the Twelve, and other general authorities. Approaching the meeting with a Harvard Business School background, he said people were disagreeing with “an openness that I had never seen in business … [the discussion] was more open than anything I had ever seen in the groups I had ever studied in business.” President Eyring said that as the discussion ensued, he witnessed a miracle.

Then after a while the conversation cycled around, and they began to agree. And I saw the most incredible thing. Here are these very strong, very bright people, all with different opinions; suddenly the opinions began to line-up. And I thought “I’ve seen a miracle. I’ve seen unity come out of this wonderful, open kind of exchange that I’d never seen in all my studies of government or business or anywhere else.”

President Eyring found this whole exchange to be quite faith promoting. “This is what it claims to be,” he said. “This is the true Church of Jesus Christ. Revelation is real.”3

According to the revelation given to Joseph Smith, the unanimous voice of the presiding quorums of the Church is required “in order to make their decisions of the same power or validity one with the other” (D&C 107:27). Thus, statements given by individual Church leaders may not “necessarily constitute doctrine.” Instead:

With divine inspiration, the First Presidency (the prophet and his two counselors) and the Quorum of the Twelve Apostles (the second-highest governing body of the Church) counsel together to establish doctrine that is consistently proclaimed in official Church publications. This doctrine resides in the four “standard works” of scripture (the Holy Bible, the Book of Mormon, the Doctrine and Covenants, and the Pearl of Great Price), official declarations and proclamations, and the Articles of Faith.4

As Elder D. Todd Christofferson has noted, “the objective is not simply consensus among council members but revelation from God. It is a process involving both reason and faith for obtaining the mind and will of the Lord.”5 Striving for unanimity is what forces each individual member of the presiding quorums to set aside their personal feelings and desires and seek out the Lord’s will. They seek unity not only among themselves but with God. That was the miracle President Eyring had witnessed—several bright and strong-willed individuals submitting their will to God, thus allowing the Spirit of the Lord to guide and inspire them toward unanimity.

In leading the Church in this way, the Apostles operate in accordance with the mind and will of the Lord and Savior. At the end of the Last Supper with His Apostles in Jerusalem, Jesus prayed that “they all may be one; as thou, Father, art in me, and I in thee, that they also may be one in us” (John 17:21). After His resurrection, the first thing that Jesus commanded His newly appointed twelve disciples was that “there shall be no disputations among you” (3 Nephi 11:28). On the following day, Jesus prayed that those twelve “may be purified in me, that I may be in them as thou, Father, art in me, that we may be one, that I may be glorified in them” (3 Nephi 19:29). Thus, unanimity is a force for goodness, righteousness, and purity and leads to harmony with both the Father and the Son.

This administrative process, which is followed scrupulously in the Lord’s Church, ensures that established doctrines and policies do not simply reflect the opinions or agendas of specific individuals. Rather, as President M. Russell Ballard testified, “when the First Presidency and the Quorum of the Twelve speak with a united voice, it is the voice of the Lord for that time.”6

Gordon B. Hinckley, “God Is at the Helm,” Ensign, May 1994, online at churchofjesuschrist.org.