Who Wrote the Peace Maker Pamphlet? 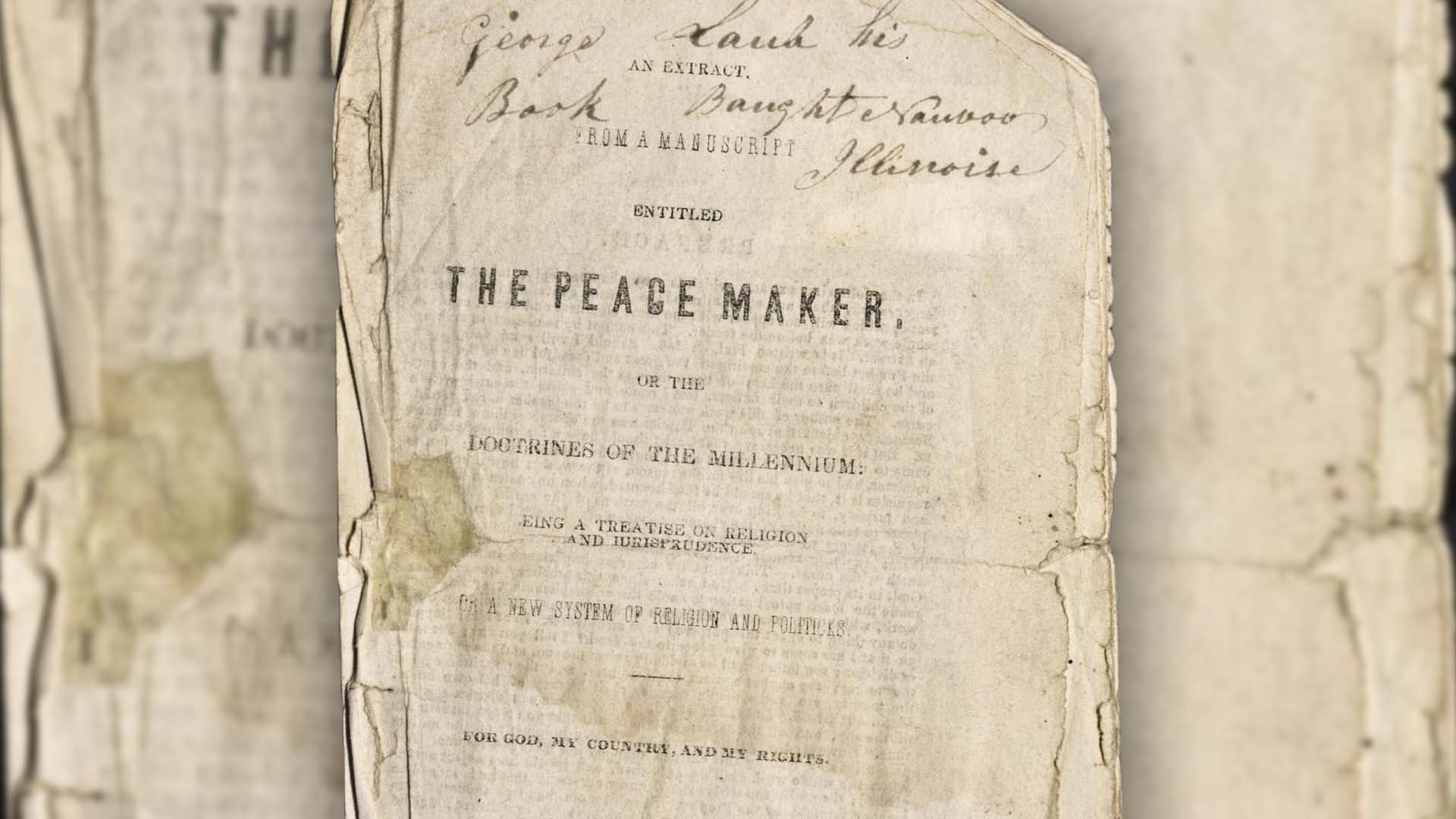 Cover of the Peace Maker pamphlet via Archive.org.
“Thou shalt love thy wife with all thy heart, and shalt cleave unto her and none else.”

In the 1960s a pamphlet claiming to be “A Little Known Discourse by the Prophet Joseph Smith” began circulating among certain Utah circles. The pamphlet purported to present the so-called “biblical view” of marriage, presenting arguments that wives should be regarded as their husband’s property and as such could not divorce their husbands; rather, only a husband could initiate divorce in marriage. The pamphlet also advanced arguments for the practice of polygamy as found in the Bible.

The provenance of this pamphlet—who published it and why they attributed it to Joseph Smith—is murky, but a line-by-line comparison quickly revealed that it was actually a slightly edited and reworked reprint of an 1842 pamphlet entitled An Extract, From a Manuscript Entitled The Peace Maker Or The Doctrine of The Millennium (simply called the Peace Maker for short), by a man named Udney Hays Jacob (sometimes referred to as Jacobs).1 In the Peace Maker, Jacob argued that restoring his highly extreme patriarchal view of “biblical marriage” would somehow bring peace and order to the United States.2 Some extremists, most famously the brothers and murderers Dan and Ron Lafferty, have used this pamphlet to justify their radical beliefs about marriage and polygamy.3

Jacob was not a Latter-day Saint when the pamphlet was printed. The pamphlet was, however, printed in Nauvoo, on a press owned by Joseph Smith and operated by John Taylor. As was a typical practice in that era, the title page listed the owner of the press, Joseph Smith, as the printer. Some have inferred from this that Joseph Smith somehow collaborated with Jacob in writing the pamphlet or at least approved of the doctrine of marriage it presented, intending the pamphlet to be some kind of “feeler” to test public reactions to polygamy.4 There were some in Nauvoo, such as John D. Lee and Oliver Olney, who believed Joseph was ultimately the one responsible for the pamphlet.5

However, the historical evidence—namely, letters written by Jacob himself—strongly indicates that Joseph Smith was uninvolved. About two years before the Peace Maker was published in Nauvoo, Udney Jacob wrote a letter to President Martin Van Buren indicating that he had a manuscript that, if it were published, would secure reelection for the president.6 A decade later, in 1851, Jacob explained to Brigham Young that that manuscript was the Peace Maker, which he said “was not written for this people [Latter-day Saints] but for the citizens of the United States who professed to believe the Bible.”7

In his 1840 letter to President Van Buren, Jacob said that the Latter-day Saints “know but very little of me” and expressed his view that the Saints were “a deluded and dangerous set of fanatics.”8 So at the time Jacob wrote the Peace Maker, not only was he not a Latter-day Saint but Latter-day Saints were not his target audience, and he in fact had a very negative opinion about them. He had also never met Joseph Smith prior to that time. In a letter to Joseph Smith in January 1844, Jacob acknowledged, “I have not to be sure the pleasure of a personal acquaintance with you.”9 It would have been difficult, to say the least, for Joseph to collaborate with an author he had never met and who believed him to be the leader of a “deluded and dangerous set of fanatics.”

In addition to this evidence from Jacob himself, Joseph Smith publicly denounced the Peace Maker after it was published as “an unmeaning rigamarole of nonsense, folly, and trash” and said it was published “without my knowledge,” adding “I do not wish to have my name associated with the author’s.”10 It is not hard to see why Joseph would so strongly denounce the pamphlet. For one thing, its teachings on marriage were significantly at odds with Joseph’s own revelations. For example, Joseph taught that marriages in the holy order of matrimony were eternal, but in the Peace Maker, Jacob indicated that all marriage ended at death.11 Jacob also portrayed himself as the second coming of the prophet Elijah, prophesied of in Malachi 4:5–6—an idea clearly contrary to Joseph’s own encounter with Elijah in Kirtland in 1836.12

Joseph’s strong denunciation also makes sense in light of events at the time involving John C. Bennett, who had defected from the faith and made a “series of wild allegations about lurid polygamous debaucheries in the Church.”13 It seems unlikely Joseph would have authorized a publication about polygamy at this time. More likely, as Latter-day Saint missionary Eli B. Kelsey explained, it was the foreman Joseph had placed over the printing press who contracted with Jacob to print the Peace Maker.14 John Taylor, who worked in the Nauvoo printing office at the time, “also denounced claims of Joseph Smith’s collaboration in Jacob’s pamphlet, which he called a ‘corrupt book.’”15

Although some have mistakenly believed either that the Peace Maker was written by Joseph Smith or that he collaborated with the author or supported its publication, the historical evidence is decidedly against that view. As historian Ronald O. Barney wrote, “[the] conclusion that Jacob and Joseph Smith were collaborative in the production of the pamphlet is unlikely.”16 Likewise, Kenneth Godfrey concluded: “From the above evidence it seems safe to conclude that Jacobs, not Joseph Smith, wrote the Peace Maker and the Little Known Discourse by Joseph Smith. Consequently, neither of these documents should be viewed as binding upon members of The Church of Jesus Christ of Latter-day Saints. They were, in fact, written by a nonmember of the Church.”17

Indeed, rather than feeling bound to follow the pamphlet’s stern and extreme patriarchal teachings on marriage, Latter-day Saints can join Joseph Smith in denouncing them as “nonsense, folly, and trash.” Instead, the Saints would be best served by turning directly to Joseph Smith’s documented revelations for guidance on the nature of marriage and the duties of husbands and wives. These teach that “marriage is ordained of God” (Doctrine and Covenants 49:15) and that husbands should “love [their] wife with all [their] heart” (D&C 42:22). Husbands have a duty to support their wives (see D&C 25:9; 83:2) and provide for their families (D&C 75:28; 88:4). “Marriage, in its truest sense, is a partnership of equals, with neither person exercising dominion over the other, but with each encouraging, comforting, and helping the other.”18