Why Did Joseph Smith File a Legal Complaint against Doctor Philastus Hurlbut? 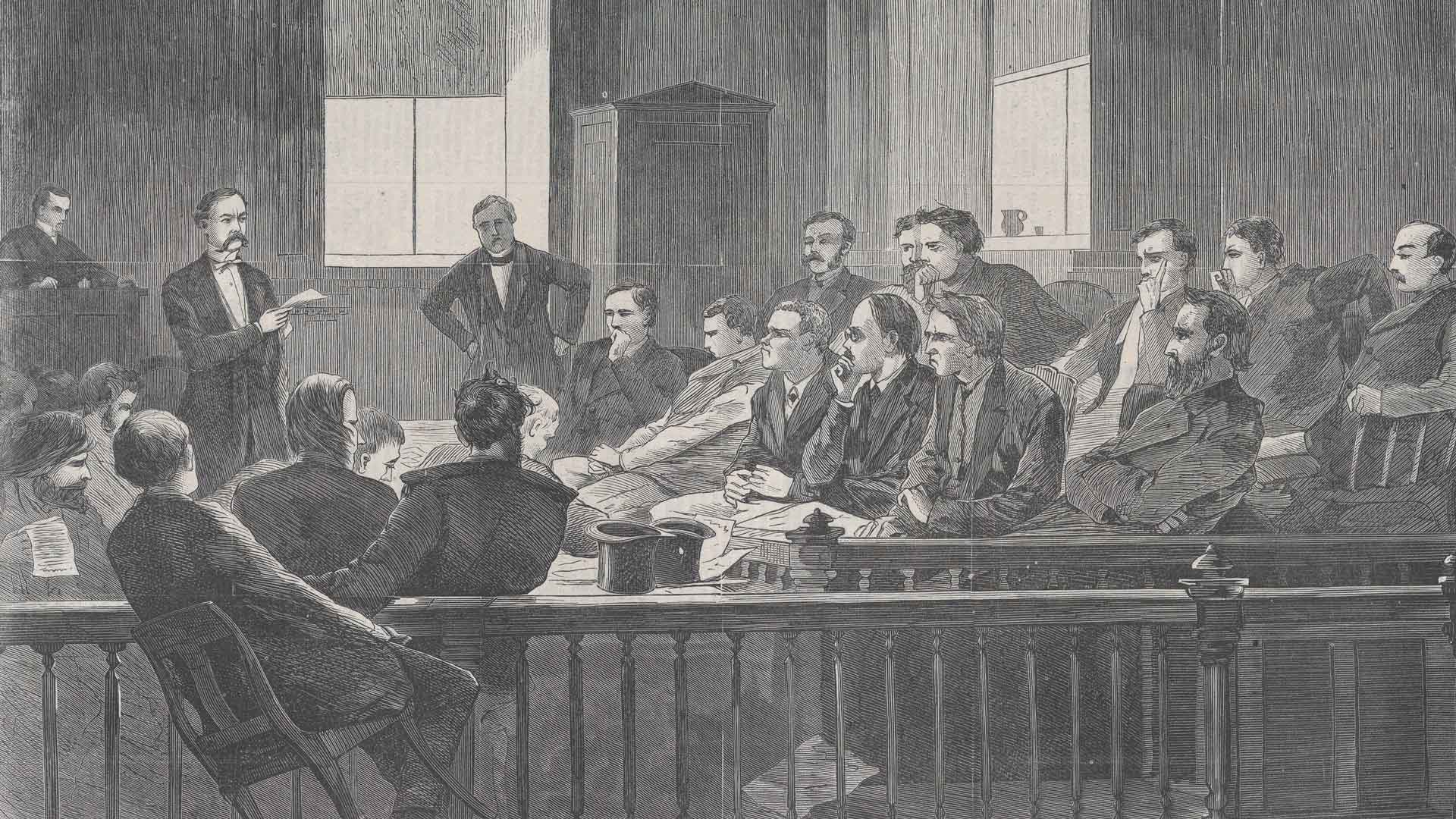 Jurors Listening to Counsel, Supreme Court, New York City Hall, New York. Drawn by Winslow Homer, 1869. Image via Met Museum.
“He called me by name, and said unto me that he was a messenger sent from the presence of God to me, and that his name was Moroni; that God had a work for me to do; and that my name should be had for good and evil among all nations, kindreds, and tongues, or that it should be both good and evil spoken of among all people.”

In 1833, Latter-day Saints in Missouri experienced bitter persecutions, resulting in their expulsion from Jackson County. As news of these events reached Kirtland, enemies of The Church of Jesus Christ of Latter-day Saints in Ohio were emboldened, heightening the tensions between the Ohio Saints and their neighbors. In the midst of that atmosphere, Doctor Philastus Hurlbut (an excommunicated member of the Church who had turned enemy), was giving anti-Mormon lectures promoting the now-defunct Spalding theory of Book of Mormon origins.1

During these lectures, Hurlbut began to threaten violence against Joseph Smith—according to George A. Smith, Hurlbut “said he would wash his hands in Joseph Smith’s blood.”2 Given recent events in Missouri and growing strains between the Saints and their neighbors in Ohio, Joseph Smith took these threats very seriously. Historian David W. Grua explained that these events prompted “a rare occasion on which [Joseph Smith] took the initiative in a judicial action.”3

On December 21, 1833, Joseph filed a criminal complaint against Hurlbut with the office of John C. Dowen, justice of the peace in Kirtland. About a week later, Justice Dowen issued a warrant for Hurlbut to be arrested and arraigned before Justice William Holbrook of nearby Painesville.4 Hurlbut was brought before Justice Holbrook on January 4, 1834, but the hearing was postponed until January 13. The hearing then lasted three days, during which the testimony of sixteen witnesses testified, most of them providing evidence that Hurlbut’s threats constituted an assault under Ohio law.5

After listening to the testimonies, Justice Holbrook ruled that “the Complainant [Joseph Smith] had reason to fear that Doctor P. Hurlbut would beat, wound, or kill him or injure his property as set forth in his complaint.”6 The ruling also set a “bond Hurlbut was required to post” (called a “recognizance”) and mandated that he appear at the county court for a full trial “on the first day of the term.”7

That day was March 31, 1834, but there were so many cases scheduled that it wasn’t until April 2 that the case was heard by Presiding Judge Matthew Birchard, and it then went on for several days. The official record of the trial has not survived, but a contemporary newspaper report and the later reminiscence of one of the witnesses at the trial provides several of the details. Based on the testimony of one Hurlbut’s witnesses, it seems his defense was that when he said “he would ‘kill’ Jo [Smith],” what he meant was “he would kill Mormonism.”8 As Grua explained:

It is true that Hurlbut posed a serious threat to the Church as an entity, but most other witnesses gave evidence in support of the claim that Hurlbut indeed intended to physically enact violence upon Smith.9

Furthermore, at issue under the Ohio definition of assault was not “the actual nature of the threat” but “whether or not [Joseph] Smith had reason to fear bodily injury.”10 Witness testimony “reconstruct[ed] the violent atmosphere in Kirtland in order to provide context to the threat and to determine if Smith really had reason to fear for his life.”11

The case against Hurlbut was persuasive. On April 9, 1834, Judge Birchard ruled that “the said complainant [Joseph Smith] had ground to fear that the said Doctor P. Hurlbut would wound, beat or kill him, or destroy his property as set forth in said complaint.”12 A new “recognizance” was entered, this time for $200, and Hurlbut was also ordered to pay for the costs of the trial.13

Joseph Smith was introduced to the legal system at an early age—as a 13-year-old witness in a legal dispute with another Hurlbut in 1819.14 The judge ruled in favor of the Smith family on that occasion too, and that formative experience likely helped give Joseph the confidence to turn to the legal system for protection in Ohio fifteen years later. The result of his case against Doctor Philastus Hurlbut in 1834 was seen as an answer to prayers that had been offered in January. This vindication also strengthened Joseph’s confidence in the law of the land. As Grua concluded, “Smith learned how the law of the land could prevent his enemies from acting out their threats and how he could lessen his own fears. Smith also came away from the case with a distinct belief that he could receive impartial treatment from the American court system.”15

This outcome was no doubt on his mind when only a few weeks later he marched to Missouri at the head of Zion’s Camp and encouraged the Saints living there to pursue every legal recourse to reclaim their land and property.16 His enemies’ abuse of the legal system in the wake of the run on the Kirtland Safety Society and the injustices following the surrender of Far West, among other experiences, would later temper Joseph’s opinions of the local justice system in his day.17 Still, thanks in part to his positive formative experiences with the law, Joseph’s general confidence in the principles of the law of the land were never shaken throughout his life.18