Why did Samuel Rely So Heavily on the Words of Past Prophets? 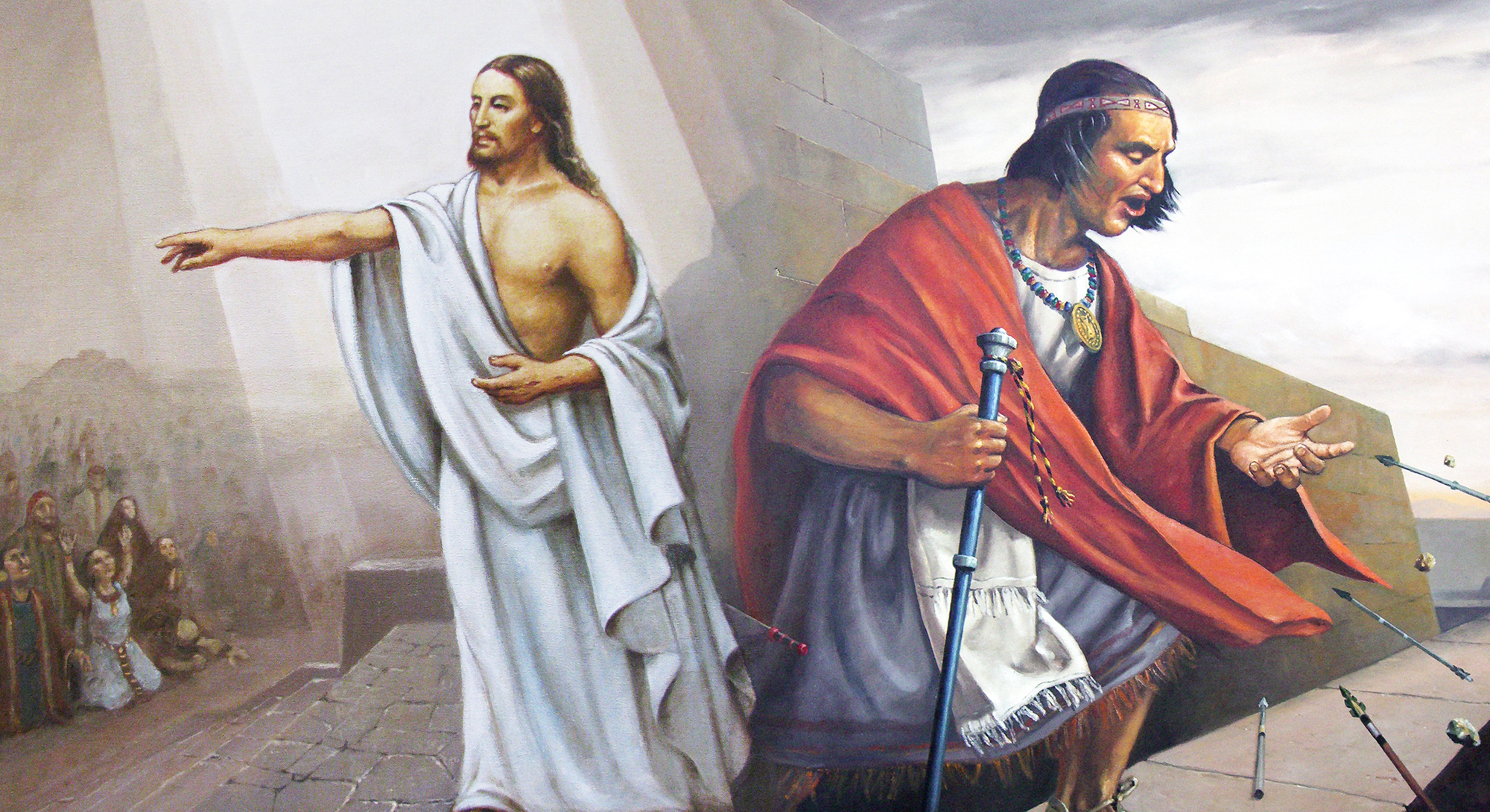 Composite He aqui soy Jesucristo and Samuel en la muralla by Jorge Cocco
"And also that ye might know of the coming of Jesus Christ, the Son of God, the Father of heaven and of earth, the Creator of all things from the beginning."

After delivering the important prophecy concerning the signs which would herald Christ’s birth,1 Samuel the Lamanite explained that he was preaching among the Nephites that they might “know of the coming of Jesus Christ, the Son of God, the Father of heaven and of earth, the Creator of all things from the beginning; and that ye might know of the signs of his coming, to the intent that ye might believe on his name” (Helaman 14:12, emphasis added).

The lengthy name-title of Christ contained in this verse is a verbatim quote from King Benjamin‘s prophecy concerning Christ’s birth.  John W. Welch has noted, “The twenty-one words in italics appear to be standard Nephite religious terminology derived from the words given to Benjamin by an angel from God: ‘He shall be called Jesus Christ, the Son of God, the Father of heaven and of earth, the Creator of all things from the beginning’” (Mosiah 3:8).2

Moreover, this quotation is not the only reference to an earlier prophet found in Samuel’s prophecies. Contributions from several scholars demonstrate that Samuel’s prophecies—when looked at in their entirety—significantly relied on a variety of prior prophetic teachings, biblical phrases, and prophetic speech patterns. 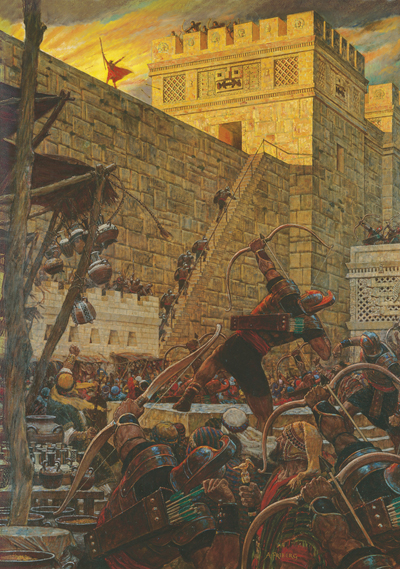 S. Kent Brown, for example, found that Samuel’s prophecies contain poetic laments which noticeably “mirror traits found in Hebrew poetry.”3 Donald W. Parry has noted, “Six prophetic speech forms” are “present in Samuel’s speech.”4 Quinten Barney has argued that Samuel’s prophecy drew “heavily upon the words of Zenos as he prophesied concerning the death of Christ.”5 And according to Shon Hopkin and John Hilton III,

Samuel’s use of selected biblical phrases—“saith the Lord,” “Lord of Hosts,” “signs and wonders,” and “anger of the Lord” being “kindled”—in his discourse is consistently found at a higher frequency than for any other speaker in the Book of Mormon (besides biblical authors quoted in the Book of Mormon).6

Although previous Lamanite missionaries had success preaching in Zarahemla a few years earlier (see Helaman 6:4–5), the Nephites were not as humble and teachable when Samuel, as an excluded visitor, spoke to them from the walls of that very city. Recognizing that they viewed him as an outsider, Samuel declared, “And now, because I am a Lamanite, and have spoken unto you the words which the Lord hath commanded me … ye are angry with me and do seek to destroy me” (Helaman 14:10).

Thus, in explaining Samuel’s significant use of biblical language, Hopkin and Hilton suggested, “It may be that as an ‘outsider’ Samuel sought to bolster his authority by using language similar to that found on the brass plates.”7 Along a similar line of thought, Samuel’s use of various traditional prophetic speech forms is evidence of his conscious desire to speak in a voice that, according to Parry, was “indicative of prophetic authority and prerogative.”8 These modes of expression gave his words a ring of power and truth.

It is also likely that Samuel’s reliance on scriptural language and concepts was intended to evoke certain themes or ideas which were immediately relevant to his own prophecies. For example, Samuel’s quotation of the lengthy name-title of Christ in Mosiah 3:8 could have helped his Nephite listeners recall that Christ’s coming had been prophesied by King Benjamin over a century earlier (see Mosiah 3:5–10). 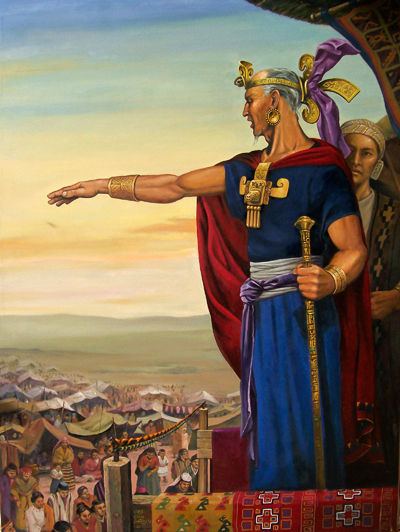 They would also have remembered that this particular formulaic name had been given to their predecessors as part of an enduring covenant, in order to distinguish them from all other people (see Mosiah 1:11; 5:7–10). Samuel’s utterance of that holy covenantal name may well have surprised and even enraged his hostile listeners.

After having identified seven distinct literary sections in King Benjamin’s famous speech, John W. Welch noted, “The all-important sacred name is given at the very center of section 3 (see Mosiah 3:8), and the crucial terms on which the efficacy of the atonement depend are stated at the precise center of section 4 (Mosiah 3:18–19).”9 Thus the central importance of this sacred name-title likely held deep religious significance to the Nephites in Zarahemla, whose ancestors unitedly centered their lives on Jesus Christ and covenanted to become His sons and daughters through His atoning sacrifice. Echoing Benjamin’s rhetorical placement of this name at the center of his coronation speech, Samuel placed Christ’s special name-title near the midpoint of his own prophetic judgment speech.

Like Samuel, modern readers of the Book of Mormon can greatly benefit from studying, memorizing, and using the sacred language contained in the canon of LDS scripture.10 Quoting prophetic language readily lends authority and power to applicable teachings of central importance. Elder Richard G. Scott has taught,

The scriptures provide the strength of authority to our declarations when they are cited correctly. They can become stalwart friends that are not limited by geography or calendar. They are always available when needed. Their use provides a foundation of truth that can be awakened by the Holy Ghost. Learning, pondering, searching, and memorizing scriptures is like filling a filing cabinet with friends, values, and truths that can be called upon anytime, anywhere in the world.11

S. Kent Brown, “The Prophetic Laments of Samuel the Lamanite,” in From Jerusalem to Zarahemla: Literary and Historical Studies of the Book of Mormon (Provo, UT: Religious Studies Center, 1998), 163–180.