Book of Mormon Central / KnoWhys
Why Are There So Many Similarities between the Dreams of Lehi and Joseph Smith, Sr.? 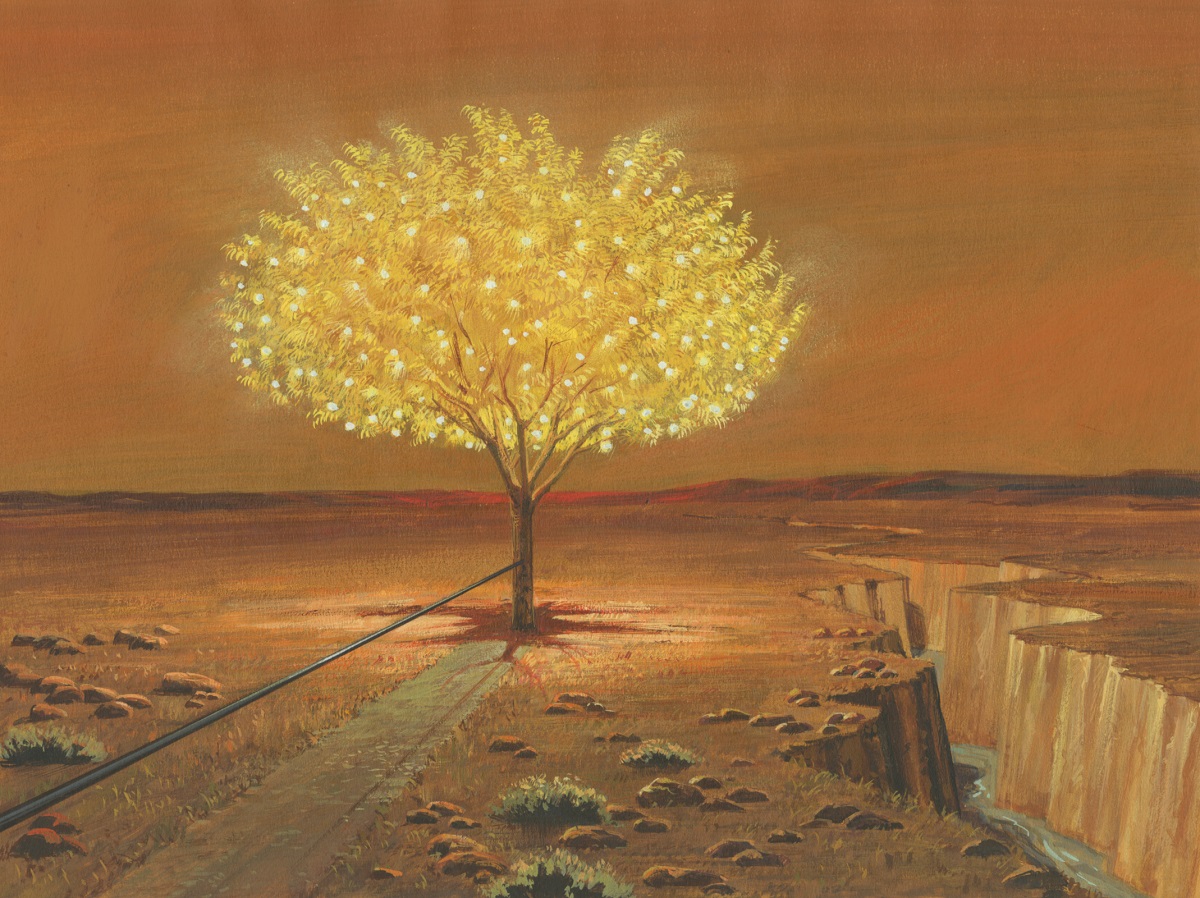 "Tree of Life and Rod of Iron" by Jerry Thompson via LDS Media Library
“For behold, methought I saw in my dream, a dark and dreary wilderness.”

The opening chapters of the Book of Mormon preserve an account of a dream or vision of the tree of life granted to the prophet Lehi (1 Nephi 8). This vision contains many elements which have become familiar–––almost household–––among Latter-day Saint readers: a dark and dreary wilderness (v. 4), an angelic guide (v. 5), a large and spacious field (v. 9), the tree of life with white fruit (v. 10), a river of water (v. 13), a rod of iron (v. 19), a strait and narrow path (v. 20), mists of darkness (v. 23), and a great and spacious building (v. 26). Lehi’s Tree of Life vision has become iconic for its powerful symbolism and profound doctrine.

Remarkably, many of these elements are reported to have been witnessed by Joseph Smith, Sr. in a dream or vision he had many years before the coming forth of the Book of Mormon. As reported by Joseph Sr.’s wife, Lucy Mack Smith, the Smith family patriarch began experiencing peculiar dreams starting in the year 1811. During this time, according to Lucy, Father Smith, like his son Joseph some years later, “became much excited upon the subject of religion; yet, he would not subscribe to any particular system of faith.”1 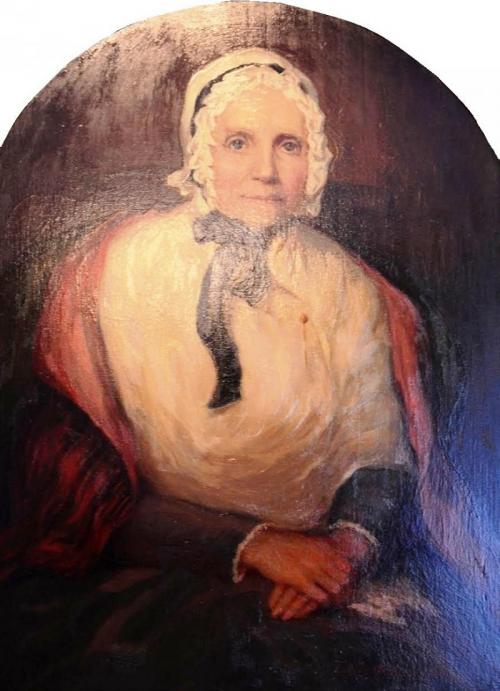 Uncommitted to any particular religious denomination, Joseph Sr. sought after the true gospel of Jesus Christ on his own. Lucy recalled her husband deeply “contemplating the confusion and discord that reigned in the religious world” during that time.2 As preserved in Lucy’s memoir, Father Smith received the following vision during his period of religious questioning and seeking:

“I thought . . . I was travelling in an open desolate field, which appeared to be very barren; and while thus travelling, the thought suddenly came into my mind, that I had better stop and reflect upon what I was doing before I went any farther. So I asked myself, what motive can I have in travelling here, and what place can this be? My guide who stood by me, said; ‘this is the desolate world; but travel on.’ The road was so broad and barren, that I wondered why I shall should travel in it; for, said I to myself, broad is the road, and wide is the gate that leads to death, and many there be that walk therein; but narrow is the way, and straight is the gate that leads to everlasting Life, and few there be that go in thereat.” I travelled a short distance farther, and came to a narrow path; I entered it, and traveling a short proceeding some distance farther, beheld a beautiful stream of water, which ran from the east to the west. Of this stream, I could see neither the source nor the outlet < its mouth >; but as far as my eyes could extend, I could see a rope running along the bank, about as high as a man could reach; and beyond me was a low but very pleasant valley, in which stood a tree, such as I had never seen before: it was exceedingly handsome, insomuch that I looked upon it with wonder and admiration: its beautiful branches spread themselves, somewhat, in the form of an umbrella; and it bore a kind of fruit, in shape, much like a chesnut burr, and as white, or whiter than snow:

“I gazed upon the fruit with considerable interest— presently the burrs or shells began to open, and shed their particles, or the fruit which they contained, which was of dazzling whiteness. I drew near and began to eat of it, and I found it delicious beyond description; and, as I was eating, I said in my heart, I cannot eat this alone, I must bring my wife and children, that they may partake with me. Accordingly, I went and brought the family; which consisted of a wife and seven children; and we all commenced eating and praising God for this blessing— we were exceedingly happy, insomuch that our joy could not easily be expressed. While we were engaged in this manner, I beheld a spacious building, standing opposite the valley that we were in, which building appeared to reach to the very heavens. It was full of doors and windows, and they were all filled with people that were very finely dressed: when these people observed us in the low valley, under the tree, they pointed the finger of scorn at us; and treated us with all manner of disrespect and contempt. But their contumely we utterly disregarded. I soon turned to my guide, and inquired of him, the meaning of the fruit. He told me it was the pure love of God shed abroad in the hearts of all those who love him and keep his commandments. He then commanded me to go and bring the rest of my children— I told him we were all there. ‘No; he replied, ‘look yonder, you have two more, and you must bring them also.’ So I raised my eyes, and I saw two small children, standing some distance off. I immediately went to them and brought them to the to the tree; and they commenced eating with the rest; and we all rejoiced together. The more we eat the more we seemed to desire, until we even got down upon our knees, and scooped it up, eating it by double-hand-fulls.

“After feasting in this manner a short time, I asked my guide what was the meaning of the spacious building that I saw. He replied, ‘it is Babylon, it is Babylon; and it must fall: the people in the doors and windows, are the inhabitants thereof; who scorn and despise the saints of God because of their humility.’ I soon awoke, clapping my hands together for joy.”

These parallels demonstrate a clear relationship between the Book of Mormon and Lucy’s recounting of her husband’s dream. Because Lucy remembered Joseph Sr. having this dream in 1811, years before the publication of the Book of Mormon, the skeptical view has usually been that Joseph Smith merely used details of his father’s dream and reworked them into his own text.4 For many reasons, however, the skeptical view is debatable.

Because “there is no evidence that Lucy Mack Smith committed her material to writing before 1845, and because the Book of Mormon was written in 1829,” questions about the direction of textual dependence between these two sources can justifiably be raised.5 It could just as easily be argued, and indeed seems more likely, that Lucy’s account, or the sources she relied on (more on this below), is dependent on the text of the Book of Mormon.

For instance, Lucy’s retelling of her husband’s dream includes this passage: “I soon turned to my guide, and inquired of him, the meaning of the fruit. He told me it was the pure love of God shed abroad in the hearts of all those who love him and keep his commandments.”6 This language is drawn directly from Nephi’s own explanation for the meaning of the tree of life: “It is the love of God, which sheddeth itself abroad in the hearts of the children of men” (1 Nephi 11:22, emphasis added).7

Recent analysis by Sharalyn D. Howcroft indicates a complex compositional history behind Lucy’s memoir which further complicates matters.8 Based on her research, Howcroft concluded that Lucy’s history was “an even more layered production” than previously realized, which should encourage “historians to begin using Lucy’s history with caution.”9 The layers uncovered by Howcroft include apparently significant scribal input and editing by Martha and Howard Coray, who acted as Lucy’s scribes in the production of her history.

Rather than being “a work of singular authorship,”10 as it has been routinely understood by average readers, Lucy’s history should more appropriately be viewed as “an example of scribal publication that heavily draws upon pre-existing texts to flesh out the lives of the extended Smith family.”11 Besides the sources identified by Howcroft,12 including potentially a source from Joseph Sr.,13 it seems likely from the example above that Lucy’s history also drew from the language of the Book of Mormon and other scriptures.14 In light of this, since there is no extant firsthand source for the vision from Joseph Sr.,15 much less one which predates the published Book of Mormon, “the complex nature of possible influences in narrating [Joseph Sr.’s] dream experience over so lengthy a period of time is beyond any certain reconstruction.”16

None of this is to say that Lucy or the Corays were intentionally lying or deceitful in how they told the account of Joseph Sr.’s vision. Authorial and editorial practices in the nineteenth century were not always as rigid as they are today, and scribes often reformatted or repurposed source material as they felt appropriate to craft a compelling story.17 It would therefore be unfair to judge Lucy or the Corays based on modern editorial standards. Rather, this point is brought up merely to raise awareness of the high probability that Lucy’s retelling of the dream Joseph Sr. had over thirty years before the time of its recording was heavily influenced by the language of the Book of Mormon.18

The prophet Joel foretold a time when God would “pour out [his] spirit upon all flesh; and your sons and your daughters shall prophesy, your old men shall dream dreams, your young men shall see visions” (Joel 2:28). Before accepting the restored gospel in 1830,19 Joseph Sr. was a religious “seeker,” or one “who took the Bible and personal prayer seriously but felt that mainstream Christianity had departed from the Bible” and so sought after the pure teachings of Christ on his own.20 He was a man of great faith, but also skeptical of the religious denominations of his day.21 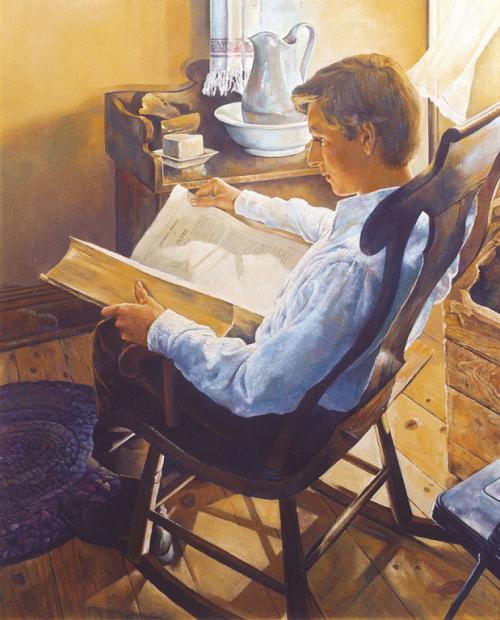 "Joseph Smith Seeks Wisdom from the Bible" by Dale Kilbourn. Image via lds.org

In accordance with Joel’s prophecy, Joseph Sr.’s faith was strong enough that, like his son, he was blessed with remarkable dreams and visions.22 There can be little doubt that Joseph Sr.’s visions played an important role in prompting him to believe the testimony of his son Joseph concerning the coming forth of the Book of Mormon and to finally join himself to a religious denomination by becoming a member of the restored church of Jesus Christ.

Skeptics might dismiss the similarities between Joseph Sr.’s and Lehi’s dreams as evidence of fraud (an idea never entertained by any members of the Smith family). But that need not be the default conclusion. Whatever role the Book of Mormon likely had in shaping Lucy Smith’s memory of her husband’s dream (or in shaping Joseph Sr.’s own memory of the dream as preserved by Lucy), there is nothing preventing God from granting comparable visions to spiritually inquisitive men and women from any time or place.23

Speaking of spiritual gifts, including gifts of revelation and prophecy, the prophet Moroni exhorted his readers to “remember that [God] is the same yesterday, today, and forever, and that all these gifts of which I have spoken, which are spiritual, never will be done away, even as long as the world shall stand” (Moroni 10:19).

Book of Mormon Central, “How Did the Book of Mormon Help the Early Saints Understand Spiritual Gifts?” KnoWhy 299 (April 12, 2017).