When Did Lehi Leave Jerusalem? 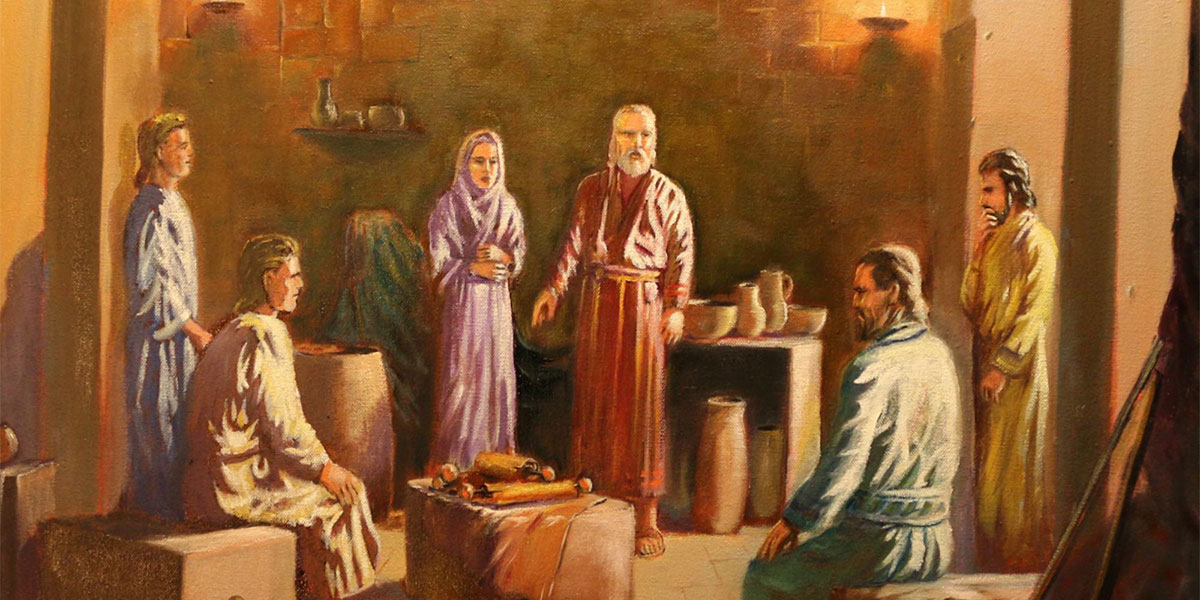 Lehi Announces Departure by Owen Richardson
“Yea, even six hundred years from the time that my father left Jerusalem, a prophet would the Lord God raise up among the Jews—even a Messiah, or, in other words, a Savior of the world.”

The modern chapter heading of 1 Nephi 1 indicates that the opening events began “about 600 BC.” For hundreds of years, the Nephites measured time by how long it had been since Lehi left Jerusalem.1 Knowing exactly when Lehi left would go a long way in figuring out the timing of many other Book of Mormon events.

Is it possible to be more specific about the when Lehi left Jerusalem? Scholars have used the information in the Book of Mormon to suggest a few different possibilities.

Lehi began his ministry “in the commencement of the first year of the reign of Zedekiah” (1 Nephi 1:4).2 The Bible reports that King Nebuchadnezzar appointed Zedekiah as king of Judah, after Nebuchadnezzar took the city of Jerusalem and deposed Jehoiachin (2 Kings 24:9–17; 2 Chronicles 36:9–10; Jeremiah 37:1). Records reporting the activities of Babylonian kings provide the very day Nebuchadnezzar took Jerusalem: March 10, 597 BC.3 This leads many Book of Mormon scholars to conclude that Lehi left around 597–596 BC, within the first year of Zedekiah’s reign (cf. 3 Nephi, headnote).4 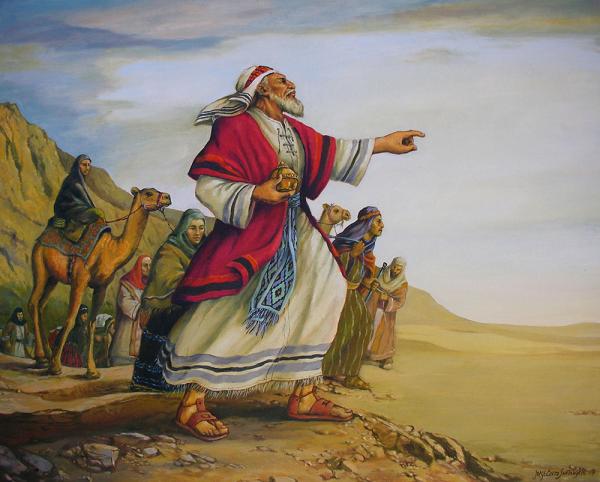 After returning for Ishmael’s family, Nephi mentioned the prophet Jeremiah being “cast into prison” (1 Nephi 7:14). It wasn’t until toward the end of Zedekiah’s reign that Jeremiah was imprisoned, about 588–587 BC (Jeremiah 32–33; 37–38).5 Because of this, some Book of Mormon scholars think Lehi stayed in Jerusalem through most of Zedekiah’s reign and departed closer to 588–587 BC.6 Others, however, point out that there were other times Jeremiah was imprisoned.7

Shortly after Nephi and his brothers returned, Lehi prophesied that in “six hundred years from the time [he] left Jerusalem, a prophet would the Lord God raise up among the Jews—even a Messiah, or, in other words, a Savior of the world” (1 Nephi 10:4; 19:8; 2 Nephi 25:19). Since Christ was born around 5 BC,8 there’s obviously less than 600 years between either 597 or 588 BC.

This problem led Jeffrey R. Chadwick to argue that Lehi departed in late 605 BC. He proposed that in 609 BC, when the Egyptians killed Jehoahaz and appointed Eliakim as king, the “people of the land” did not recognize the Egyptian vassal as the legitimate king, but instead considered young Zedekiah as the rightful heir. If this is true, the first year of Zedekiah’s reign mentioned by Nephi could be 608 BC, and Lehi could have left at 605 BC, a full 600 years before the birth of Christ.9

Others have suggested that the Nephites counted their years differently from the traditional solar (365-day) year. For example, the Maya had two different “years”: the 365-day haab, and the 360-day tun.10 John L. Sorenson pointed out, “If we mark off 600 tun years from Zedekiah’s first year, 597–596 BC … [it] brings us into the year overlapping 5–4 BC, an acceptable date for Christ’s birth.”11

Ancient Israelites, on the other hand, used a lunar calendar of approximately 354 days, with an extra month added once every 2–3 years to keep it in sync with the solar year.12 Randall Spackman noted, if the Nephites did not add the extra month—like the “Muslim year” still used today in much of the Middle-East—then “600 strict lunar years” would pass between 588 BC and 5 BC.13 Thus, whether Lehi left in 597 or 588 BC, there are ways, based on ancient precedent, to count off 600 years until Christ was born (3 Nephi 1:1).

It is not our purpose here to adjudicate between these various proposals, ranging between 605–588 BC, for when Lehi left Jerusalem. It is enough to know that it was “about 600 BC,” as stated in the chapter heading in latest edition of 1 Nephi 1. When dealing with ancient history, it is not surprising to have ambiguity in the chronology or timing of particular events. Chronological problems and contradictions are not unknown in many authentic ancient historical documents.14 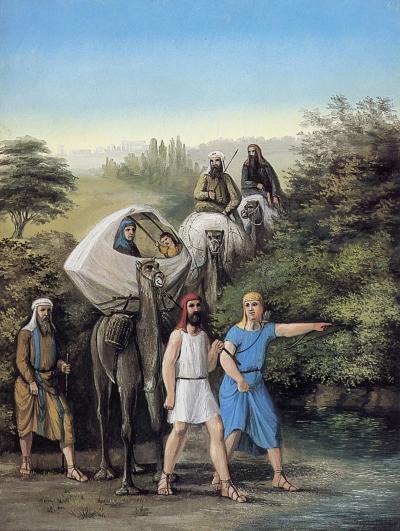 "Departure of Lehi and His Family from Jerusalem" by C.C.A. Christensen

Even Mormon seems a little uncertain about how many years had passed between when Lehi left Jerusalem and the chronologically crucial time when King Mosiah took the throne, which Mormon estimated was “in the whole, about four hundred and seventy-six years” (Mosiah 6:4). Like historians today, Mormon apparently had some uncertainty about the timing of things that happened so many centuries before.

Why then would anyone want to delve into this on-going chronological inquiry? For several reasons. It can be worthwhile to explore these different possibilities. Some proposals are stronger than others and one approach will solve certain problems better than another, but all offer possible implications about the context of the early chapters of the Book of Mormon. All of the different proposals fall within a very eventful 20-year window. Each proposed departure date creates a different social and political context for the opening chapters of the Book of Mormon, yielding a variety of insights into why the Book of Mormon begins the way it does.

For many, Lehi’s 600-year prophecy is central to the Book of Mormon. For this reason, it is useful to know whether Lehi left in 588, 597, or 605 BC. Either way, the Nephites may well have meticulously and accurately counted off 600 years between that time and Christ’s birth, depending on which ancient method of counting years they used and adopted.

But the events of 3 Nephi 1 suggest that even the Nephites experienced some confusion in knowing beforehand the exact timing of Christ’s coming, despite the fairly specific prophecies of Lehi and Samuel the Lamanite.15 When Nephi said that a Messiah would come “even six hundred years from the time that my father left Jerusalem” (1 Nephi 10:4; 19:8; 2 Nephi 25:19), was he thinking 600 years to the day? Or the month? Or just within six centuries?16

This uncertainty on the exact timing of Lehi’s departure and its relationship to the birth of Christ actually helps us to take stock of our own present situation. Thinking about the years of wondering and waiting experienced by the Nephites helps us to realize that we, likewise, live in a time in which we anticipate the prophesied coming of Christ—his second coming.

The Savior declared “that the day and hour” of his coming “knoweth no man” (Matthew 24:36; cf. Mark 13:32), a fact which has been reiterated in modern revelation (see Doctrine and Covenants 49:7; 133:11). Thus, like the faithful Nephites, we too must “watch steadfastly” for the signs of his coming (3 Nephi 1:8; cf. Matthew 25:13), and be prepared to greet him whenever that glorious time arrives.