Book of Mormon Central / KnoWhys
What Can We Learn from the Savior’s First Words at Bountiful? 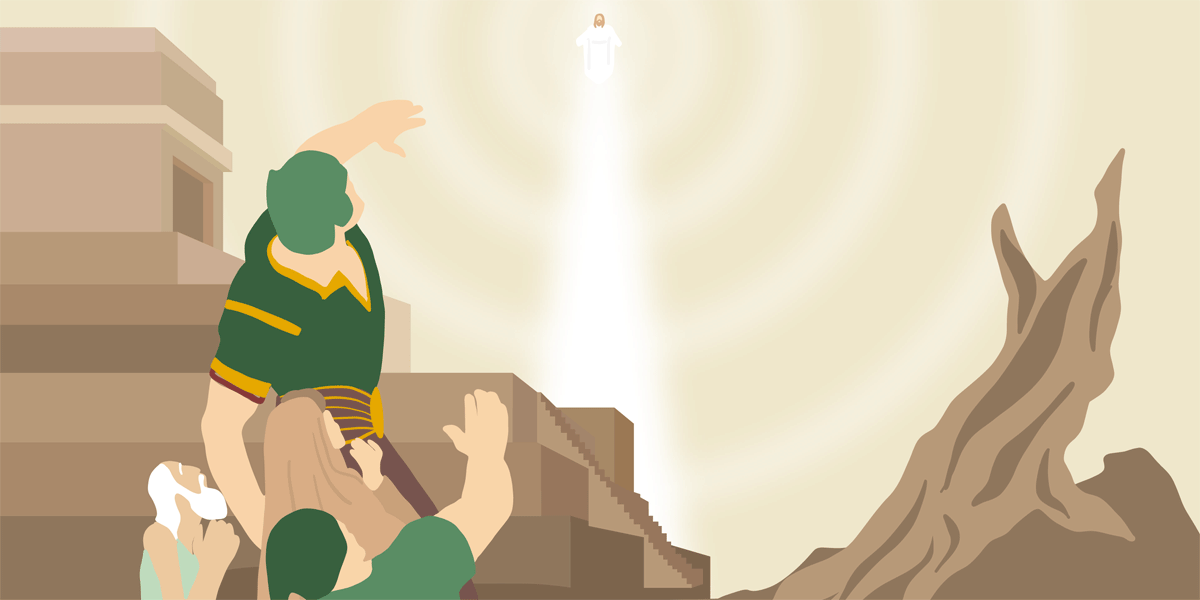 Image by Book of Mormon Central
“Behold, I am Jesus Christ, whom the prophets testified shall come into the world. And behold, I am the light and the life of the world; and I have drunk out of that bitter cup which the Father hath given me, and have glorified the Father in taking upon me the sins of the world, in the which I have suffered the will of the Father in all things from the beginning.”

Upon the death of the Savior, the Nephites and Lamanites witnessed terrible darkness and destruction (3 Nephi 8–10).1 In the aftermath of these events, the people gathered “round about the temple” in Bountiful (3 Nephi 11:1). There they witnessed the miraculous appearance of the resurrected Lord. The first words He spoke upon His appearance are some of the most profound statements in all of scripture. He introduced who He is, described what He had just recently accomplished, and established His relationship to the Father (3 Nephi 11:10–11).

Before speaking a word, the Savior “stretched forth his hand” (3 Nephi 11:9) a gesture that often comes before a person speaks important words in the Book of Mormon.2 The people were confused before this gesture (3 Nephi 11:8), but after making this gesture and introducing Himself, the people “fell to the earth” and “remembered” (3 Nephi 11:12). Among some early Christians, the raising of the hand(s) was known as Christ’s “sign.”3

First, the Savior introduced Himself as “Jesus Christ, whom the prophets testified shall come into the world.” For many years, the descendants of Lehi and his people had looked forward to the coming of the Messiah, the Son of God, whose name would be Jesus Christ (see 2 Nephi 25:19; Mosiah 3:8). He thus established Himself as the long-awaited Messiah, anticipated by many of the Book of Mormon prophets before.4

He also declared, “I am the light and the life of the world.” Although in the Gospel of John, Christ called Himself the “light of the world” and of Him it is said that “In him was life; and the life was the light of men,”5 only in the Book of Mormon does Jesus use the specific title Light and Life of the World.6 For a people who had recently endured so much darkness and death, the announcement that the Light and Life now stood before them must have been especially meaningful. As observed Elder Jeffrey R. Holland, “His glory was a splendid and sharp contrast to the three days of death and darkness experienced earlier by these people.”7

In the New Testament gospels, the Savior dreaded drinking the “cup,” and prayed that it may pass from Him.8 It is here, speaking to the Nephites and Lamanites, however, that He first calls it the “bitter cup.”9 Alma had previously spoken of “a bitter cup” that the wicked have to drink as part of the consequence for sin (Alma 40:26). Drinking “the bitter cup” is thus an apt metaphor for “taking upon [Himself] … the sins of the world.” The Savior suffered the consequences of sin (drank the “bitter cup”) on behalf of all, so that those who repent may not have to drink of the bitter cup themselves.10

Throughout His stay among the Book of Mormon peoples, the Savior repeatedly explained aspects of his relationship with the Father, and consequently 3 Nephi is perhaps the best place in all of scripture to learn about the Godhead.11 The Savior began this teaching immediately, as He introduced Himself, explaining that He “glorified” the Father and “suffered the will of the Father in all things.” The Savior thus began by testifying to His deference toward the Father.

Of this first declaration from the Savior to the Book of Mormon people, Elder Jeffrey R. Holland wrote:

Of all the messages that could come from the scroll of eternity, what was the declaration? … Fifty-six words. The essence of his earthly mission. Obedience and loyalty to the will of the Father, however bitter the cup or painful the price. That is a lesson he would teach the Nephites again and again during the three days he would be with them. By obedience and sacrifice, by humility and purity, by unflagging determination to glorify the Father, Christ was himself glorified. In complete devotion to the Father’s will, Christ had become the light and the life of the world.12

In humbly submitting to the will of the Father in all things, the Savior set an example for all to follow. Ultimately, we overcome sins through His atoning sacrifice, the same way He accomplished His atoning sacrifice in the first place: we willingly submit like a child submits to his father (Mosiah 3:19).13

Although submission to the Father’s will often seems difficult, no one will ever face a greater and more challenging task than that of the Savior’s “bitter cup.” The fact that He arose to the challenge and drank the bitter cup, after desiring to “shrink” from the task (Doctrine and Covenants 19:18) can give us confidence to face even our greatest challenges. This is especially true since, through His Atonement, the Savior comforts, aids, and strengthens us in our times of trial.

This is what makes Him both the Light and the Life of the World. Just as He did for the faithful people gathered at the temple in Bountiful, He can bring us light during darkened times, and through His light He casts away the darkness. He conquers death by bringing everlasting life.

The Savior’s visit to those Nephites and Lamanites is “the focal point, the supreme moment, in the entire history of the Book of Mormon.”14 The tone was set by the miraculous way in which He came down among them, and His very first words taught them foundational truths about His relationship with the Father, the nature of His atoning sacrifice, and about who He is. The fact that these teachings were given at the temple reminds us of the importance of the temple as a place where we can learn of Him, come unto Him, and echo His selfless sacrifice by entering into eternal covenants with the Father through Him of our own free will and choice.

Ezra Taft Benson, “The Savior’s Visit to America,” Ensign, May 1987, online at lds.org.