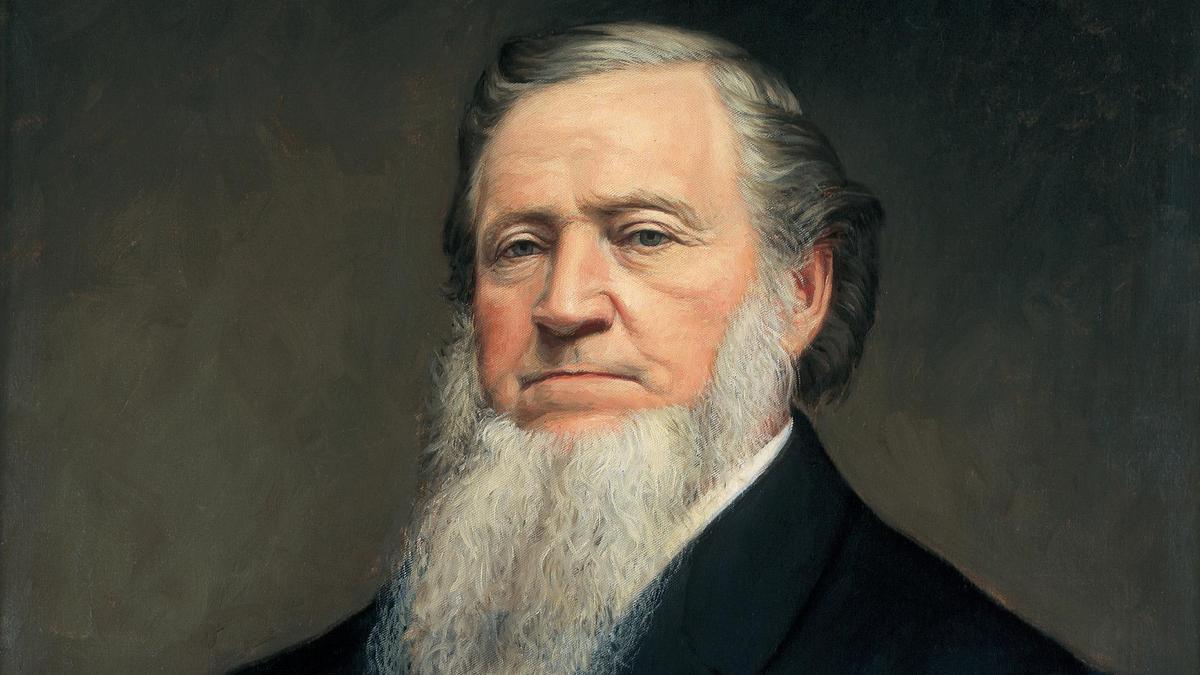 Brigham Young via lds.org
“That these plates of brass should go forth unto all nations, kindreds, tongues, and people who were of his seed.”

On September 21, 1827, in Port Byron, New York, a young craftsman looked out into the night’s sky and witnessed a “heavenly vision” unfold before his eyes, “a great army marching in perfect unison from the east to the west until it filled the surrounding horizon.”1 That same night, roughly 30 miles to the west, Joseph Smith pulled the plates of gold from the earth.2 Joseph would go on to translate and publish the Book of Mormon, but it would be Brigham Young, the craftsman from Port Byron, who would begin to take the Book of Mormon to “all nations, kindreds, tongues, and people” (1 Nephi 5:18).

Brigham recalled that the Book of Mormon first “came to my hands in two or three weeks” after publication. Joseph’s brother Samuel Smith had left a copy in Mendon, New York with Brigham’s brother Phineas. The book quickly passed through the hands of several members of the Young family, and while some were already singing its praises, Brigham remained skeptical. “Hold on,” he remembered thinking, “Wait a little while.”  He recalled, “I examined the matter studiously for two years before I made up my mind to receive that book.”3

Finally, in April 1832, Brigham heard Eleazer Miller, “a man without eloquence, or talents for public speaking,” bear “simple, unadorned testimony” of the Book of Mormon. After 2 years of deliberation, Brigham said, “My own judgment, natural endowments, and education bowed to this simple, but mighty testimony.”4 He was baptized that next Sunday, on April 15, 1832.5

Twelve years later, Brigham Young was the President of the Quorum of the Twelve when Joseph and his brother Hyrum were tragically killed in Carthage Jail.6 In the midst of that tragedy, competing voices arose seeking to fill the leadership void left behind by the Prophet. As Brother Brigham humbly sought to do the Lord’s will and what was best for the Saints, many witnessed the mantle of Joseph miraculously pass to Brigham Young.7

The Book of Mormon influenced the Saints as they settled in their new territory, which Brigham dubbed “Deseret,” a Book of Mormon name for the honeybee.10 Like others who settled out west, the Saints ran into many conflicts with the Native Americans, but because of the belief that they were “Lamanites,” Brigham attempted to establish more benevolent policies toward the Native Americans, though they were not always followed.11 Brother Brigham also felt inspired to establish temples in certain places, like St. George and Manti, because he believed Moroni or another ancient Nephite had dedicated that land.12

By the early 1850s, missionaries had been sent out again, and it was during Brigham Young’s time as president of the Church that the first foreign language editions of the Book of Mormon were published. It started with the Danish edition in 1851, followed in 1852 by Welsh, French, Italian and German, and then Hawaiian in 1855.13 Selections of the Book of Mormon in Spanish were published in 1875.14 Brigham “rejoiced when those translations appeared in print.”15

Several of Brigham Young’s doctrinal teachings were also derived from the Book of Mormon as well.19 For example, Brigham taught, “When God speaks to the people, he does it in a manner to suit their circumstances and capacities,” a doctrine first explained by Nephi (2 Nephi 31:3).20 He applied this to the Book of Mormon itself, teaching “if the Book of Mormon were now to be re-written, in many instances it would materially differ from the present translation.”21

Although Brigham Young approached the Book of Mormon with caution at first, he came to play an important role in spreading the book throughout the world. He was one of the first to carry it across the seas, and oversaw the publication of the first edition printed outside the United States. During his presidency, missionaries began to carry it to the far reaches of the earth, and several foreign language editions were published. With Brigham Young at the helm, the Book of Mormon began to “go forth unto all nations, kindreds, tongues, and people” (1 Nephi 5:18).

“The Scriptures,” in Teachings of the Presidents of the Church: Brigham Young (Salt Lake City, UT: The Church of Jesus Christ of Latter-day Saints, 1997), 118–124.