Why Did Moroni Quote from the Book of Joel? 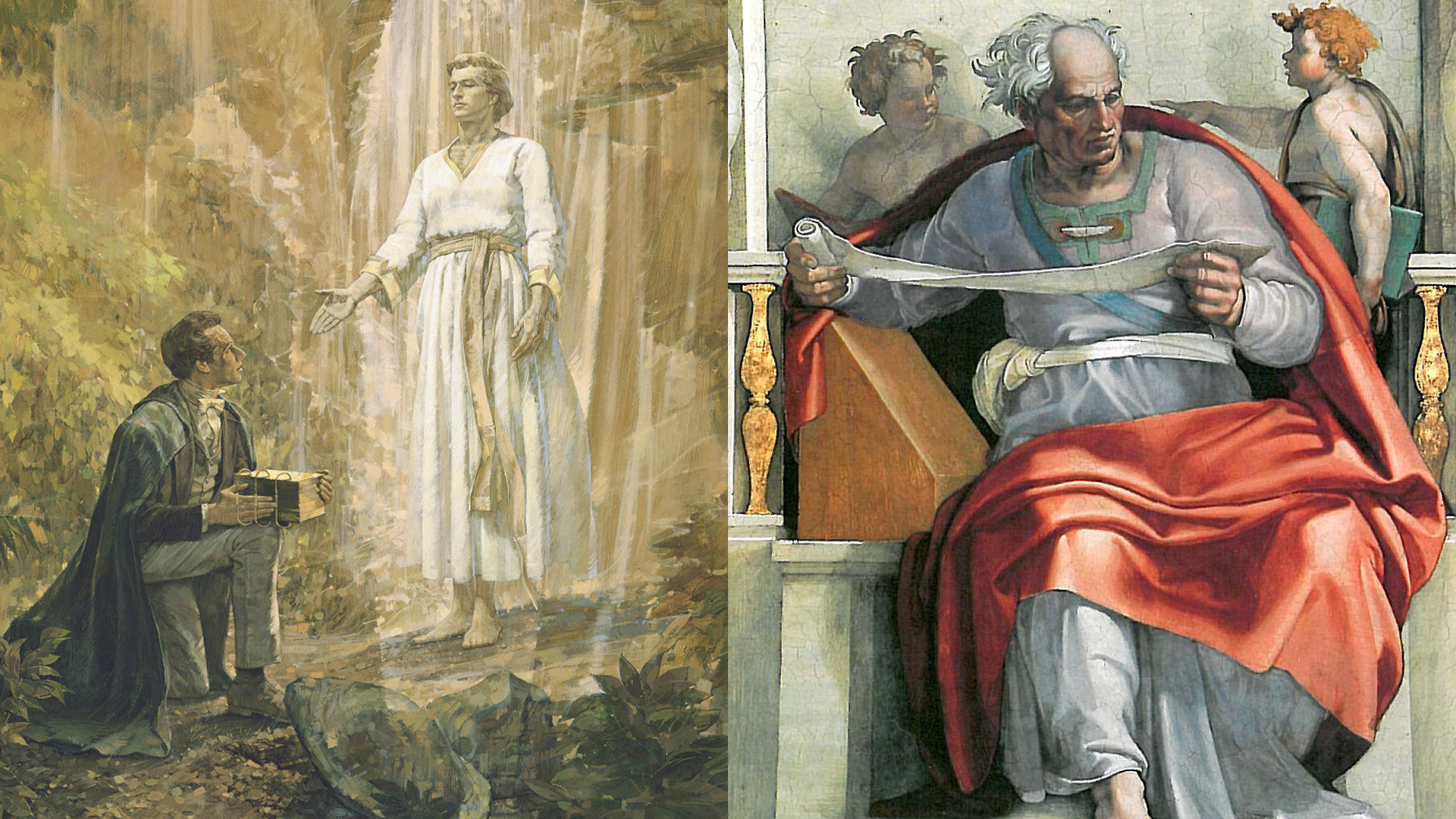 Moroni Appears to Joseph Smith by Tom Lovell and the Prophet Joel by Michelangelo.
“And it shall come to pass afterward, that I will pour out my spirit upon all flesh; and your sons and your daughters shall prophesy, your old men shall dream dreams, your young men shall see visions.”

On the night of September 21, 1823, the angel Moroni appeared to Joseph Smith and told him about an ancient record that had been deposited not far from his home. As a part of his instructions to the young Joseph, Moroni quoted numerous scriptures from the Old and New Testaments, including selections from Malachi, Isaiah, and Acts. Joseph recorded that Moroni “also quoted the second chapter of Joel, from the twenty-eighth verse to the last [verse 32]. He also said that this was not yet fulfilled, but was soon to be” (Joseph Smith—History 1:41).

Clearly, these five verses must have been significant to Joseph Smith’s ministry to merit citation by Moroni on this occasion. Joel foresaw an era when the Spirit of God would be poured out on all people, young and old, male and female, leaders and servants, with miracles seen on earth and in the sky, darkening the sun and the moon and delivering those who call on the name of the Lord, “for in mount Zion and in Jerusalem shall be deliverance” (Joel 2:28–32).

Many biblical scholars have found the book of Joel difficult to date, both in terms of when it was written and of which day or days it looked forward to, especially as Joel includes no specific temporal clues. Biblical scholar Kent P. Jackson has noted, “This absence of contemporary references certainly seems to be deliberate; it is as though Joel wanted us to leave behind all thoughts of the here and now and join him in his visions of the future.”1 This led Jackson to conclude that “every word in the book refers to the latter days—from the time of the Prophet Joseph Smith into the Millennium.”2 This view helps explain why Joel’s message was especially relevant to the young Prophet.

The day of the restoration of the gospel would be a time when “all of the spiritual gifts known among men would be restored again to earth.”3 The first two verses of the Joel passage describe the outpouring of these gifts in the last days: “And it shall come to pass afterward, that I will pour out my spirit upon all flesh; and your sons and your daughters shall prophesy, your old men shall dream dreams, your young men shall see visions: and also upon the servants and upon the handmaids in those days will I pour out my spirit” (Joel 2:28–29).

While Jackson notes that the complete and ultimate fulfilment of this prophecy will be during the Millennium, “many of the gifts that will be had in such abundance in that blessed setting are indeed had among the faithful today.”4 Fulfilments of this prophecy were recorded by the early Saints, culminating in a dramatic fashion shortly after the dedication of the Kirtland Temple.5 This outpouring of miraculous visions and manifestations has often been described as a “Pentecostal season” because of its similarity to the spiritual outpouring fifty days after the Resurrection of Jesus on the Day of Pentecost, recorded in Acts 2:1–12.6 The apostle Peter applied that same verse from Joel to that day to describe the miraculous outpouring of the Spirit on that occasion, just as it would be applied by Moroni to the Restoration in the latter days (see Acts 2:14–21).

Further steps toward the complete fulfillment of this prophecy can be seen in the coming forth of the Book of Mormon and other scriptures revealed through Joseph Smith and his successors. As Jackson noted, “With the Restoration would come a steady flow of revelation to the Lord’s Saints, contained now in latter-day scriptures and also in the inspired teachings and practices of the church.”7 Similarly, “Part of the outpouring foretold by Joel (2:28–29) would be the restoration of the power of the priesthood.”8 John the Baptist restored the Aaronic Priesthood, and then Peter, James, and John restored the Melchizedek Priesthood. Later, during the Kirtland Pentecostal season, other priesthood keys were restored through Joseph Smith under the hands of Moses, Elias, and Elijah (see Doctrine and Covenants 110).9

Finally, the last three verses of Joel 2 that were quoted by Moroni deal with signs that will precede the Second Coming of Jesus Christ. While some of these signs offer a bleak picture for the future, the Lord also informs people everywhere that “whosoever shall call on the name of the Lord shall be delivered: for in mount Zion and in Jerusalem shall be deliverance” (Joel 2:32). As the Prophet of the dispensation of the Restoration, Joseph Smith would be uniquely responsible for helping prepare the Saints to worthily call upon the Lord for strength and deliverance.

After reviewing the description of the blessings promised to be poured out in the last days, Jackson notes that many “envision miraculous outpourings of the Spirit, such as visions, healings, and speaking in tongues. Though these are tremendous manifestations, the blessings of which Joel spoke are not restricted to these.”10 Rather, all God’s children have the ability to feel the Holy Ghost and know the will of the Lord in their lives as they seek to follow the true and living God. Baptized members of The Church of Jesus Christ of Latter-day Saints likewise receive the sacrament and the gift of the Holy Ghost, allowing them to maintain and have the presence of the Spirit with them always.

Thus, “The most powerful manifestation of the Spirit today is the personal revelation that we call a testimony, which is granted freely by the Lord to the sons, daughters, old men, young men, servants, and handmaids of the Church.”11 The ability to receive personal revelation is critical to all members of the Church, regardless of age and station. President Russell M. Nelson reiterated this fact, stating that “in coming days, it will not be possible to survive spiritually without the guiding, directing, comforting, and constant influence of the Holy Ghost.”12 Elder Dale G. Renlund also taught about the importance of personal revelation in the October 2022 general conference.13

Disciples of Christ everywhere can further receive strength from the words in Joel 2 that refer to the signs of the Second Coming. Joel provides a guide to receive—at church, in the temple, and in our homes—the direction and protection that will be needed to withstand many latter-day trials. As we continue to call on the name of the Lord Jesus Christ and remain faithful to our covenants, we can find the deliverance in and through Him that Joel and Moroni prophesied would come.