Why Did Moroni Quote Malachi about Elijah’s Coming? 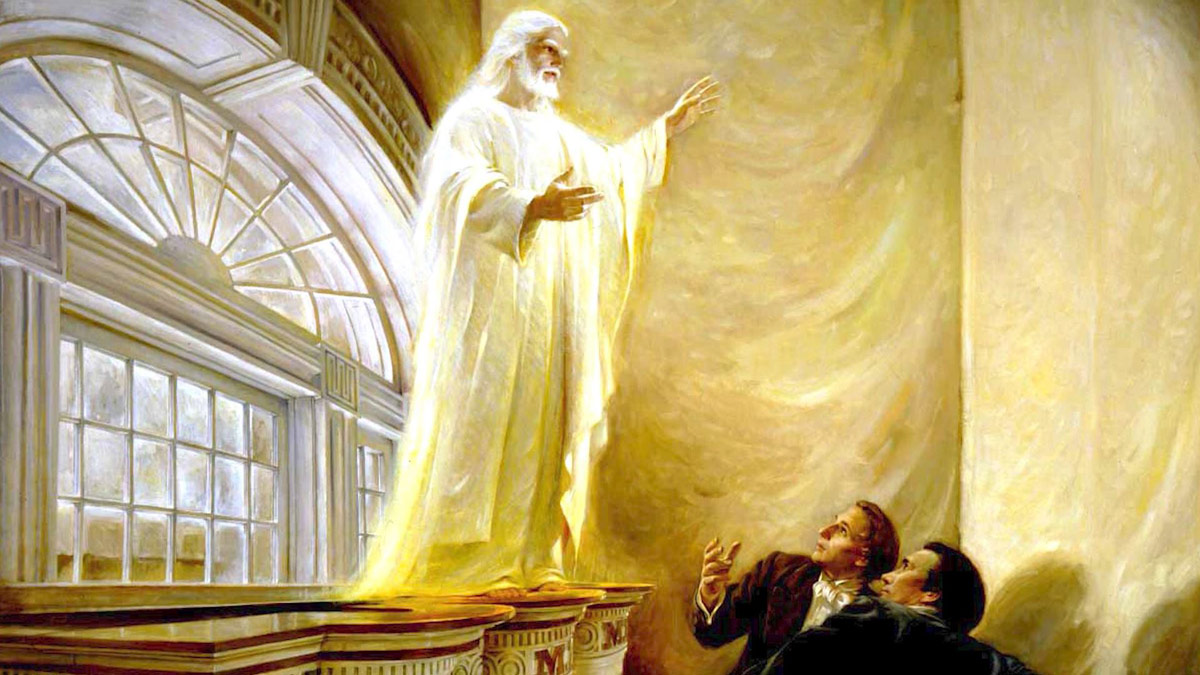 “Christ Appears in the Kirtland Temple” by Walter Rane
"Behold, I will send you Elijah the prophet before the coming of the great and dreadful day of the Lord; And he shall turn the heart of the fathers to the children, and the heart of the children to their fathers, lest I come and smite the earth with a curse."

When Moroni visited Joseph Smith on the night of September 21, 1823, he did more than just tell him about “a book deposited, written upon gold plates,” though that was the primary purpose of his visit (Joseph Smith—History 1:34). He also quoted various biblical prophecies, indicating that they were soon to be fulfilled (JS—H 1:36–40). Among those prophecies was Malachi 3–4, but Joseph remembered that when quoting Malachi 4, there was “a little variation from the way it reads in our Bibles” (JS—H 1:36).

Moroni may have first learned of Malachi’s prophecy while helping his father, Mormon, as he abridged the Nephite records. The Savior had quoted Malachi 3–4 to the Nephites during His ministry at Bountiful (3 Nephi 24–25), but His quotation didn’t include the variant expressions in the text given by Moroni to Joseph Smith. Instead, the text in 3 Nephi closely follows the KJV. However, after quoting the words of Malachi, Jesus “expounded” or interpreted them in ways that are not included in Mormon’s report of the Savior’s explanations (3 Nephi 24:1; 26:1).

Mormon and Moroni likely knew from additional records available to them what the Savior taught on this occasion. The context in 3 Nephi suggests that the resurrected Jesus spoke to His Twelve about covenants, priesthood, and sealing.1 Thus, when speaking to Joseph Smith, Moroni’s variation of Malachi’s words may well have been based directly on the clarifications and teachings of the Lord that aren’t found in the Book of Mormon.

Indeed, no one captures the essence of Elijah’s promised return better than does Moroni’s inspired unfolding of Malachi’s words. And along this line, Casey Paul Griffiths, a professor at BYU, noted, “Moroni’s recitation of Malachi’s prophecy concerning the return of Elijah was the first step toward connecting the entire human family through temple ordinances in the last days.”2

The next step came with the promised restoration of priesthood authority. This came about during the time when Joseph Smith and Oliver Cowdery were translating the Book of Mormon. During this process, their hearts and minds were turned toward the ancient order of God that was had among previous generations. In turn, on three occasions, ancient priesthood holders ministered to these young men, allowing the blessings of the priesthood to be among the future generations of God’s children. The first to come was John the Baptist—himself a type of Elijah during his mortal ministry (Matthew 11:12–14; 17:10–12; Mark 9:11–13; Luke 1:17). After this came Peter, James, and John, who saw Elijah on the Mount of Transfiguration, and who received keys and powers from him (Matthew 17:3; Mark 9:4; Luke 9:30).3

Then, on April 3, 1836, after the Kirtland temple was built and dedicated, several other prophetic forebearers turned their attention toward future generations, administering and transferring priesthood keys to Joseph and Oliver. Among those who appeared on this occasion was Elijah himself, who quoted Malachi’s prophecy and then said, “Therefore, the keys of this dispensation are committed into your hands; and by this ye may know that the great and dreadful day of the Lord is near, even at the doors” (D&C 110:14–16).

Both Jesus and Moroni quoted the last words of Malachi because those verses symbolically stood at the end of the Hebrew collection of the prophetic texts at the conclusion of the Old Testament. Malachi and those Hebrew prophets left off knowing that more was yet to come, moving beyond the covenant mediated by Moses. They knew that it would be superseded by a “new covenant,” as Jeremiah in particular had forecasted (see Jeremiah 31:31). Malachi’s ending signaled a new beginning for both Jesus and Moroni, with the best being yet to come.

But the records left by those Hebrew prophets had not gone into any detail about the conditions and powers of that new covenant. Malachi gave little detail in that regard, but he had powerfully summarized the eternally crucial effects that the new covenant would have. It would bind generations together through the obedience that comes from righteously remembering God’s commandments (Malachi 4:4) and through the love that thrives in multigenerational hearts that are knit permanently together by being welded into one heart by priesthood powers (Malachi 4:6). Both Moroni and Jesus invoked the prophetic authority of Malachi as they set in motion new dispensations of the fullness of the Gospel of Jesus Christ, grounded in covenantal promises that can only be extended through ordinances performed through authorized holders of priesthood power.

While the promised roles of Elijah in Malachi’s and Moroni’s prophecies were fulfilled in several stages in the life of Joseph Smith, it would not be correct to say the prophecy was completely fulfilled in the prophetic ministry of Joseph Smith alone. Elijah committed the sealing keys back into the hands of living prophets and faithful followers, placing the obligation on them and future generations to take the necessary steps in exercising those keys and in living worthy of the promised blessings. Commenting on Moroni’s variations on Malachi’s prophecy, Griffiths explained:

Moroni’s reading emphasizes that the children of Israel who live in the latter days are primarily responsible for taking action. As the hearts of the children turn to their fathers, this action accelerates the work to bring the gospel to all those who died without the opportunity to receive it, which creates familial bonds through the sealing powers restored by Elijah.4

In some important respects, the bestowing of priesthood authority and keys by ancient prophets represented the fathers turning their hearts toward the children. The responsibility now falls upon the children—present generations—to turn their hearts to the fathers by remembering them, valuing the promises made of old, and using those priesthood powers to form “a welding link” back through all generations of time, by means of the sealing power and vicarious temple ordinances (D&C 128:18). As Joseph Smith explained:

For it is necessary in the ushering in of the dispensation of the fulness of times, which dispensation is now beginning to usher in, that a whole and complete and perfect union, and welding together of dispensations, and keys, and powers, and glories should take place, and be revealed from the days of Adam even to the present time. (D&C 128:18).