How Did Jeremiah’s and Lehi’s Ministries Reflect One Another? 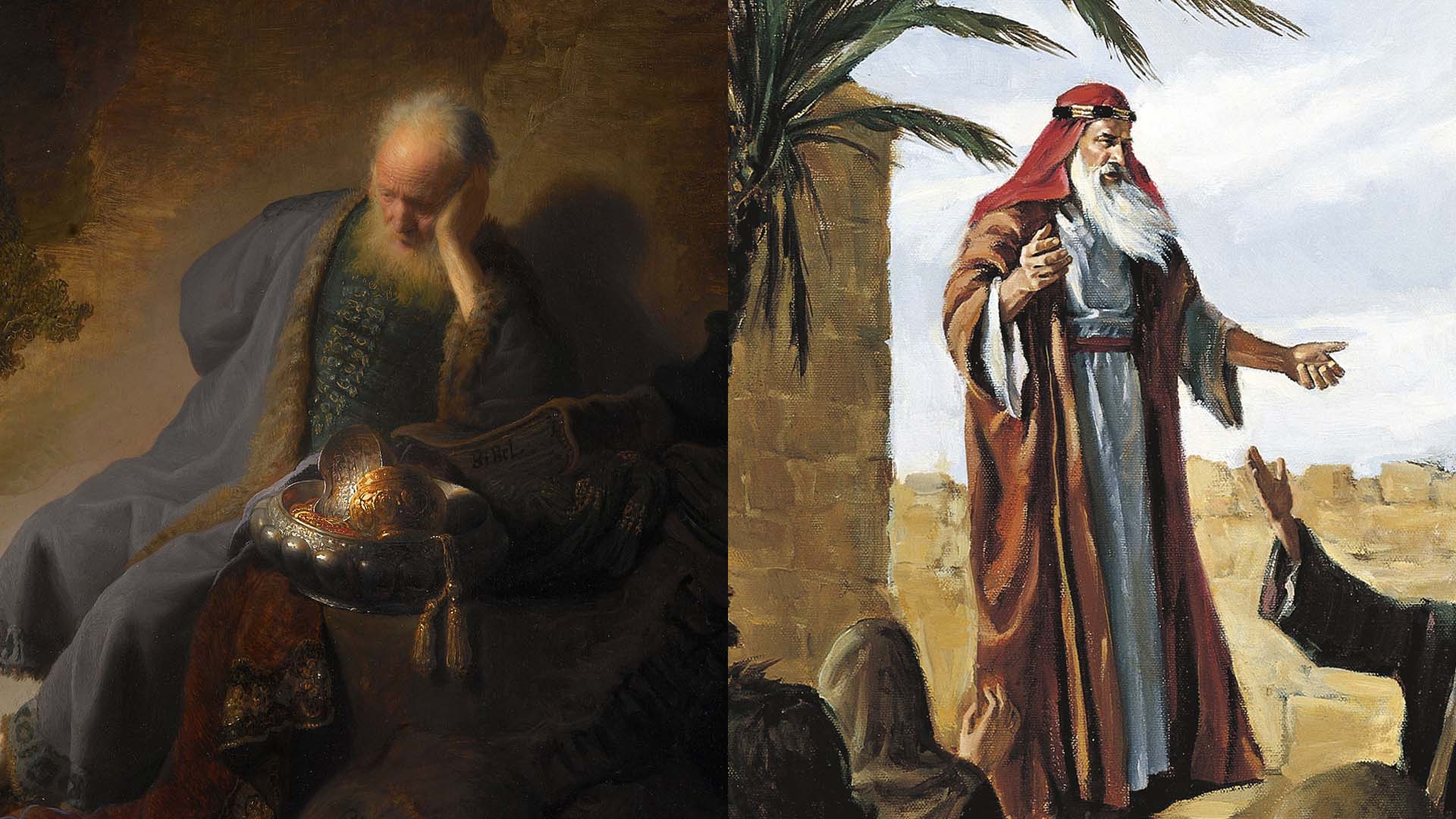 Left: Jeremiah Lamenting the Destruction of Jerusalem by Rembrandt. Right: Lehi Prophesying in Jerusalem by Arnold Friberg.
“For it came to pass in the commencement of the first year of the reign of Zedekiah, king of Judah, (my father, Lehi, having dwelt at Jerusalem in all his days); and in that same year there came many prophets, prophesying unto the people that they must repent, or the great city Jerusalem must be destroyed.”

According to Nephi, “in the commencement of the first year of the reign of Zedekiah, king of Judah … there came many prophets, prophesying unto the people that they must repent, or the great city Jerusalem must be destroyed” (1 Nephi 1:4). Significantly, this is the very picture that the Bible paints of this time period, as Jeremiah, Zephaniah, Habakkuk, Urijah, the prophetess Huldah, and others prophesying and preaching were all contemporaries of Lehi.1

Of these prophets who preached in the final years leading up until the exile, Jeremiah left the most extensive and detailed writings about what Jerusalem was like at that time. Nephi emphasized that he couldn’t “make a full account of the things which my father hath written,” (1 Nephi 1:16),2 but the book of Jeremiah helps fill in many of the gaps left in Nephi’s account. Studying writings and ministries of Lehi and Jeremiah together can therefore “foster a greater appreciation for these prophets and help illuminate the message they proclaimed.”3

According to Joseph Smith, both Lehi and Jeremiah would have held the Melchizedek Priesthood, allowing each to minister the ordinances of that priesthood despite their different genealogies.4 Furthermore, both prophets are explicitly connected with the act of record keeping. In Jeremiah 36, the Lord instructed Jeremiah to “write … all the words that I have spoken unto thee” for the purpose that the Israelites might repent (Jeremiah 36:2–3). Lehi likewise kept a record of “many things which he saw in visions and in dreams; and he also hath written many things which he prophesied and spake unto his children” (1 Nephi 1:16).5 Later Nephite prophets followed this pattern with the express hope that the Nephites and Lamanites might repent (cf. Moroni 1:4; Enos 1:13).

Because of the wickedness of the people, both prophets were rejected and suffered intense persecution. Yet, despite their trials both also witnessed the “tender mercies of the Lord.” As Lehi prophesied to the people, they “sought his life, that they might take it away” (1 Nephi 1:20). Such a danger was real—the prophet Urijah had earlier been executed by King Jehoiakim for the same teachings (see Jeremiah 26:20–23). Lehi was spared, however, and led to a new land of promise. Jeremiah was blessed by the Lord in a different manner: although he was imprisoned at least once, he was spared from Babylonian captivity.6

The ministries (and accounts) of both Lehi and Jeremiah also began with a divine call and commission from the Lord. Such a call and commission of the prophet culminated in the prophet’s admission to the Lord’s presence and His Divine Council. In 1 Nephi 1 and Jeremiah 1, Lehi and Jeremiah both saw the Lord, spoke with Him face-to-face, and received their prophetic call as a fulfillment of this prophetic requirement. Jeremiah reflected on this experience later in his ministry, especially when comparing himself to the false prophets who had neither “stood in the counsel of the Lord” nor “perceived and heard his word” (Jeremiah 23:18).7

As true prophets who had each been admitted into this Divine Council, both Lehi and Jeremiah prophesied of similar events. David and Jo Ann Seely have identified four themes common to Lehi’s and Jeremiah’s prophecies—namely, “[1] repentance and the impending destruction and exile by the Babylonians; [2] the coming of the Messiah; [3] the future scattering and gathering of Israel; and [4] the eventual restoration of the gospel in the latter days.”8

Unfortunately, the people did not repent and Jerusalem was destroyed, fulfilling Lehi’s and Jeremiah’s prophetic warnings.9 Such a tragic event was not without hope, though. Both prophets foresaw the Messiah’s ministry. The Book of Mormon specifically relates that “the Son of God [would] come, according to [Jeremiah’s] prophecy” (Helaman 8:20).10 Ultimately, the gathering of scattered Israel would be commenced for the final time as the Lord restored the gospel in the latter days. Both Lehi and Jeremiah left writings looking forward to this day: “Lehi, a descendant of Joseph, founded the people that would author the Book of Mormon.”11 Similarly, a series of passages from Jeremiah was applied by Moroni to the work Joseph Smith would perform, according to Oliver Cowdery.12

Both the Bible and the Book of Mormon testify that multiple prophets ministered to the people of Jerusalem in the years preceding the Babylonian exile. In so doing, both books of scripture provide additional and compelling witnesses of the ancient prophecies regarding the Messiah and events yet to be fulfilled.

Lehi and Jeremiah lived drastically different lives. As has been noted by David and Jo Ann Seely, much of these prophets’ ministries and lives mirror one another in ways to speak to a wider audience in Jerusalem.13 This included the manner in which Jeremiah and Lehi would experience the tender mercies of the Lord—while Jeremiah was commanded to stay in Jerusalem where he would survive the Babylonian assault, Lehi was commanded to leave Jerusalem to spare his life from the inhabitants of the city itself. Despite the differences in their lives and ministries, both Lehi and Jeremiah served as two witnesses to establish every word of the Lord (see 2 Corinthians 13:1).

As Latter-day Saints continue to study the lives and ministries of these two profoundly important prophets, they can better understand and appreciate what each prophet went through to share their messages of hope for Israel in a future day. Study of these prophets can also further deepen our understanding and love for Jesus Christ, who had called them to testify of Him and His redeeming, sanctifying, and cleansing role as the Savior of the world and His continued efforts to gather Israel today.