Book of Mormon Central / KnoWhys
Why Did Moroni Provide the Exact Wording of Priesthood Ordinances? 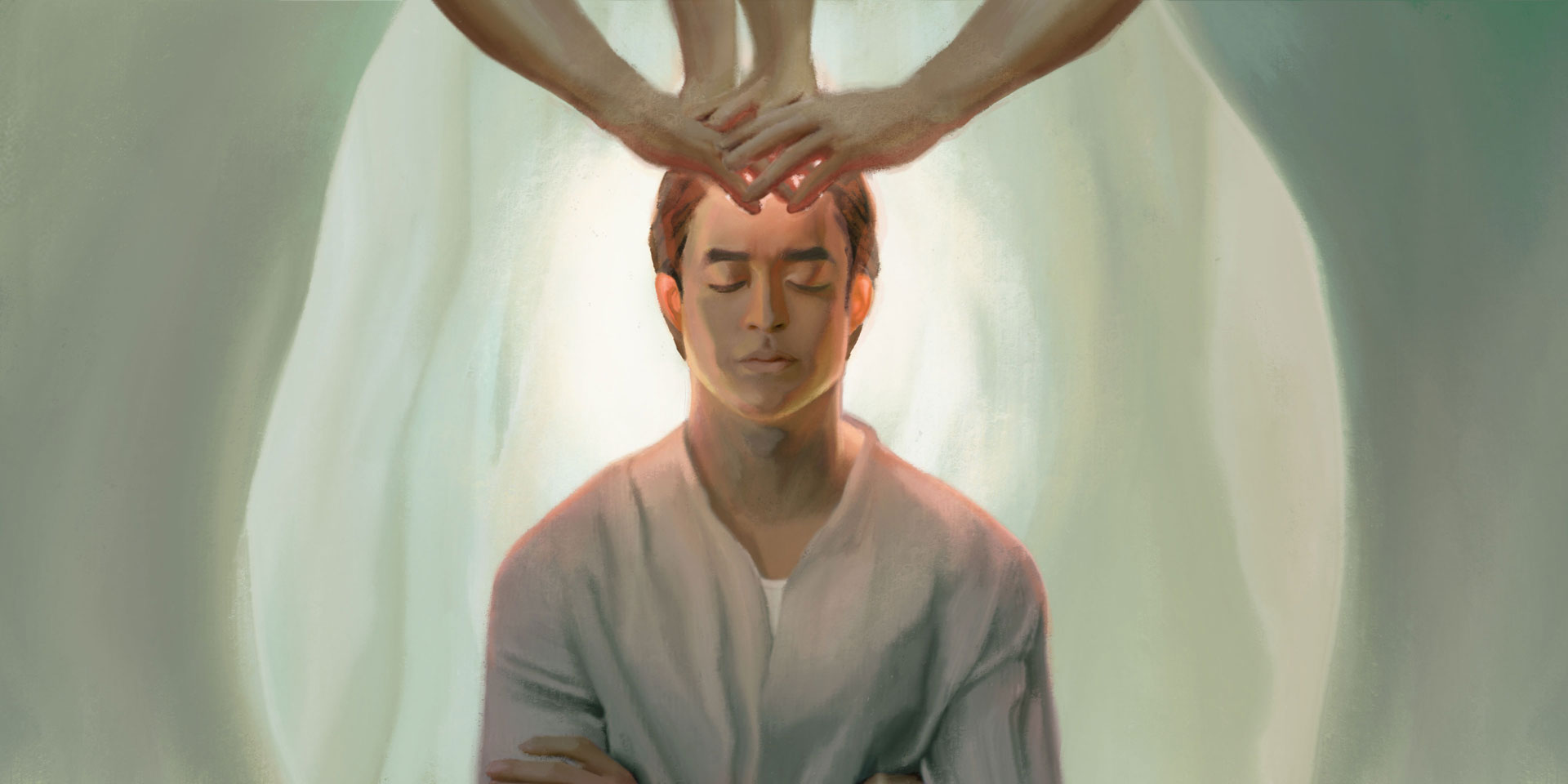 Image by Normandy Poulter and the Virtual Scriptures Group.
“The manner which the disciples, who were called the elders of the church, ordained priests and teachers … they laid their hands upon them, and said: In the name of Jesus Christ I ordain you to be a priest (or if he be a teacher, I ordain you to be a teacher) to preach repentance and remission of sins through Jesus Christ, by the endurance of faith on his name to the end. Amen.”

As Moroni wandered in the final years of his life (Moroni 1:3), he took advantage of the extra time he had to “write a few more things” (Moroni 1:4). Of all the things he could have chosen to add to his father’s work at this point, the first few items he included was the exact wording of certain priesthood ordinances.

In Moroni 2, he recorded “The words of Christ, which he spake unto his disciples, the twelve whom he had chosen, as he laid his hands upon them” (Moroni 2:1). This refers back to the account Mormon abridged of Christ’s visit, when Jesus “touched with his hand the disciples whom he had chosen, one by one, even until he had touched them all, and spake unto them as he touched them” and “the disciples bare record that he gave them power to give the Holy Ghost” (3 Nephi 18:36–37).1 Moroni may have been inspired to include this in order to fulfill his father’s promise to “show unto you hereafter that this record is true” (3 Nephi 18:37).2

Next, in Moroni 3, he recorded “The manner which the disciples, who were called the elders of the church, ordained priests and teachers,” describing how they “laid their hands upon them” and then recording the words of the ordination prayer (Moroni 3:1–3). The procedures followed here also appear to have their origins in Jesus’s ministry to the Nephites.3

Finally, in Moroni 4–5, he recorded the exact words used in the Nephite sacramental prayers.  These words derive directly from Christ’s teachings about the sacramental bread and wine (3 Nephi 18:5–12).4

These clear explanations of administrative practice and procedure proved invaluable to Joseph Smith and Oliver Cowdery as they finished translating and publishing the Book of Mormon and turned their attention to establishing the Lord’s Church again on the earth.5

For example, in June 1829, Oliver Cowdery drafted the first known attempt to lay out the administrative procedures for the Church of Christ in the latter days, called the “Articles of the Church of Christ.”6 This document relied heavily on the Book of Mormon, including most of the instructions given in Moroni 2–5. For instance, the instructions for ordaining priests and teachers are as follows (with verbatim quotations of Moroni 3 in bold):

And ye are also called to ordain Priests and Teachers [Moroni 3:1] according to the gifts and callings of God unto men [Moroni 3:4] and after this manner shall ye ordain them Ye shall pray unto the Father in my name and then shall ye lay your hands upon them and say In the name of Jesus Christ I ordain you to be a Priest or if he be a Teacher I ordain you to be a Teacher to preach repen­tance and remission of sins through Jesus Christ by the endurance of faith on his name to the end Amen [Moroni 3:2–3]7

The “Articles” also include verbatim use of Moroni 4 and 5, which was carried over into Doctrine and Covenants 20 (vv. 77–79), which became the official “Articles and Covenants of the Church” when it was founded on April 6, 1830.8 With only slight variation,9 these same prayers from the Book of Mormon continue to be used every week when the sacrament is administered to congregations throughout the world.

Several factors likely influenced Moroni’s decision to add these important instructions after he had previously thought that the book of Ether was going to be the last thing he was going to be able to record. What was it that he had left out? Why did he return and record more?

First, as John W. Welch has observed, Moroni began, first off, in chapters 2 and 3 by detailing the precise words and procedures to be used in conferring the power to perform sacred ordinances. In doing so, Moroni wanted to make it clear that “having the priesthood and the Holy Ghost is foundational. There is nothing more important than that. … Moroni really knew about the importance of covenant renewal: he placed the Holy Ghost at number one and priesthood at number two. We can see how he was starting with the most important points.”10 Setting forth the exact words and laying out the precise procedures to be followed, Moroni signaled to all future readers that these ordinations were not to be taken casually. They were to be administered seriously, properly, and with attention to detail.

Second, because these were sacred ordinances, Moroni may have been previously reluctant to record their exact words for fear that they might fall into the wrong hands—especially since these holy words trace back to the very words that Jesus Himself used in His ministry among the Nephites. Moroni knew that Lamanites were trying to track down and kill all who would “not deny the Christ” (Moroni 1:2), and surely they would have mocked and desecrated the sacramental prayers, and then would have destroyed his records as well, if they could get their hands on them (see Mormon 6:6).

So rather than running the risk of someone profaning these sacred ordinances, Moroni waited until he had wandered a safe distance before recording these sacred words (Moroni 1:3–4). Moroni knew that once he buried and sealed up this record, these words would safely be in God’s hands for protection, and that only whomever God authorized would be able to find and read them.

Lastly, Moroni may have known that he would have a hand in delivering this record to the future prophet and translator and instructing him on how to fulfill his mission and restore Christ’s church to the earth. He thus deliberately included these precisely worded materials that would “be of worth … in some future day” in establishing the Church once again (Moroni 1:4).11

For all of these and probably other reasons as well, Moroni’s inspired choice to include exact wordings and instructions for the performance of these priesthood ordinances proved invaluable to Joseph Smith and Oliver Cowdery in organizing the Church in New York in 1830. His wise choice continues to provide rich blessings as well to the entire Church of Jesus Christ of Latter-day Saints throughout the world today.