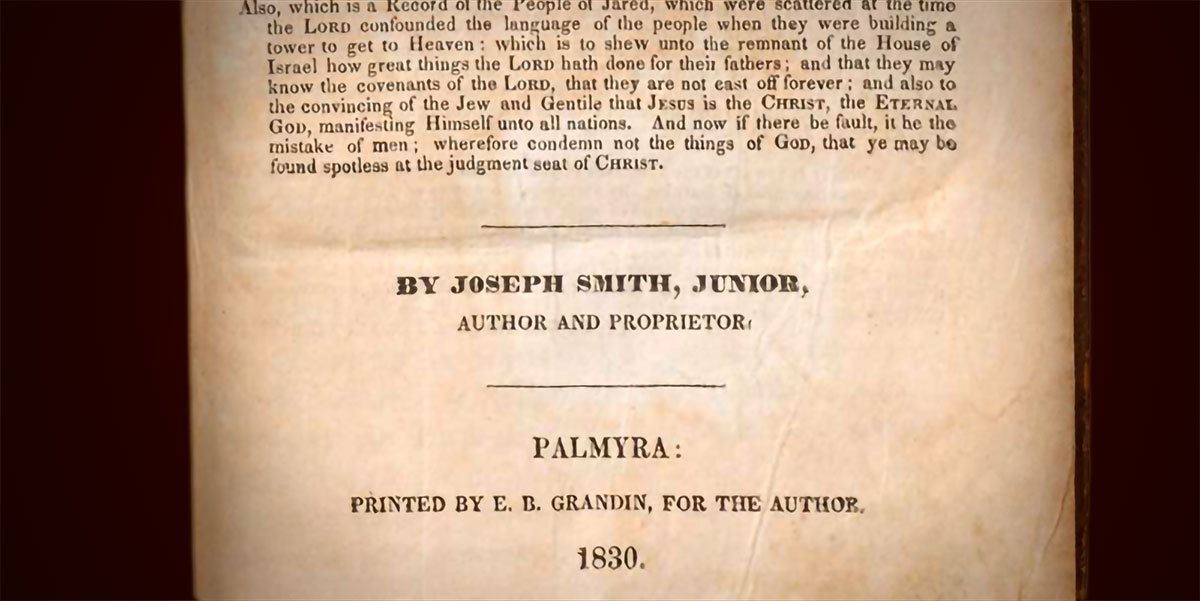 The Title Page of the 1830 Edition of the Book of Mormon. Image via history.lds.org.
“To come forth by the gift and power of God unto the interpretation thereof.”

As observed by Miriam A. Smith and John W. Welch, “Joseph fits comfortably . . . within the broad legal meaning of the word author” by nineteenth century legal standards. “Musical composers, cartographers, etchers, engravers, and designers were all authors within the meaning of that term in [a 1790 copyright] statute” in effect at the time. Additionally, “A translator also qualified, for copyright purposes, as the author of a book he had translated. Indeed, other translators [of the time] called themselves ‘authors.’”6

The testimony of the Three and Eight witnesses, which were included at the end of the 1830 edition of the Book of Mormon, plainly speaks of Joseph as translating the plates.7 Revelations received during and shortly after the time of the coming forth of the Book of Mormon likewise speak of Joseph Smith and Oliver Cowdery as translating the record,8 never of writing or authoring it.9 Even the very preface to the 1830 edition of the Book of Mormon, which appears right after the title page and copyright page, clearly presents Joseph’s own claims to have “translated” the record.10 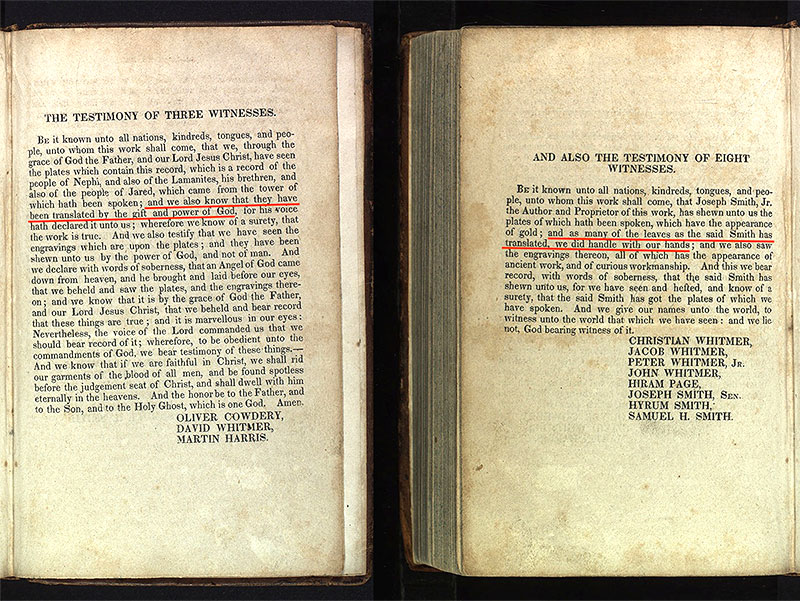 The Testimony of Three and Eight Witnesses as they appear in the 1830 edition of the Book of Mormon speaking of Joseph Smith as the translator of the plates. Images from josephsmithpapers.org.

In short, “there is no reference in Joseph Smith’s own words to his claiming authorship for the Book of Mormon,”11 and so, to “prevent confusion” he changed “author and proprietor” to “translated by” when the time came to reprint the book (the copyright being safely retained).12 Contrary to what some might assume, “whatever the legal conventions of the time, the claims of Joseph Smith . . . and contemporary supporters leave little doubt that the role being ascribed to Smith was that of translator, rather than author, in the traditional understanding of both terms.”13

Nevertheless, some contemporary nineteenth century readers of the Book of Mormon expressed either confusion or outright mockery at the title page naming Joseph the “author and proprietor.”14 In fact, questions about this language appeared even before the Book of Mormon was printed in March 1830.

The original copyright application for the Book of Mormon naming Joseph Smith the “author” and the “author and proprietor” was filed on June 11, 1829.15 A printed proof sheet of the title page was produced at the same time,16 and “in the June 16, 1829, issue of [E. B.] Grandin’s paper, the newspaperman published the title page of the forthcoming Book of Mormon, one of the requirements Joseph Smith needed to fulfill in order to secure a copyright for the book.”17 Additional copies of the title page were being printed in local newspapers in June and August 1829.18 In November 1829, Oliver Cowdery wrote a letter to a certain Cornelius C. Blatchly, who had inquired of Martin Harris about the coming forth of the Book of Mormon.19 One of the questions raised by Blatchly was why Joseph was named “the author” of the Book of Mormon as per the now-circulating title page. Oliver responded thus:

Your first inquiry was, whether it was proper to say, that Joseph Smith Jr., was the author? If I rightly understand the meaning of the word author, it is, the first beginner, or mover of any thing, or a writer. Now Joseph Smith Jr., certainly was the writer of the work, called the Book of Mormon, which was written in ancient Egyptian characters,—which was a dead record to us until translated. And he, by a gift from God, has translated it into our language. Certainly he was the writer of it, and could be no less than the author.20

Oliver appeared to clarify an ambiguity in the contemporary meaning of the word author in this letter. Noah Webster’s 1828 dictionary defined “author” as:

1. One who produces, creates, or brings into being; as, God is the author of the Universe.

2. The beginner, former, or first mover of any thing; hence, the efficient cause of a thing. It is appropriately applied to one who composes or writes a book, or original work, and in a more general sense, to one whose occupation is to compose and write books; opposed to compiler or translator.21

Under the first definition, Joseph easily qualified as the author of the English translation of the Book of Mormon—he being the one who “produce[d], create[d], or [brought] into being” the translation by divine aid. Oliver was very clear in his reply about the Book of Mormon being a translation by the gift and power of God, but did not bring up the legal reasoning behind Joseph being called the “author and proprietor” because the legal term itself already reflected the broader definition of the word at that time. He did, however, want to clarify that the words writer and author could apply to more than just someone who wrote an original composition and could, contrary to Webster’s definition, equally apply to a translator like Joseph Smith.

While Oliver’s response was personally unsatisfying to Blatchly,22 it nevertheless made clear that Oliver and Joseph Smith understood the Book of Mormon to be a translation of “an account of the first inhabitants of this continent” written in ancient Egyptian characters and “engraved on plates which have the appearance of gold.”23 While somewhat peculiar by today’s standards, Oliver’s reasoning for the appropriateness of Joseph being designated as both the “author and proprietor” and the translator of the Book of Mormon should not be overlooked. 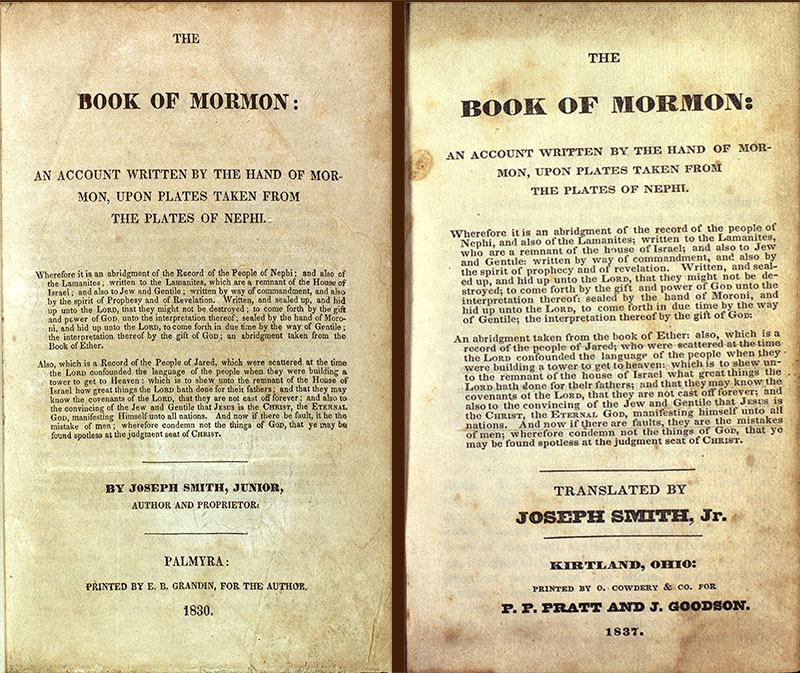 “The 1830 first edition and 1837 second edition of the Book of Mormon side by side showing the change from “Author and Proprietor” to “Translated By”. Images from josephsmithpapers.org.

Second, this combined with the fact that the definitions of words may change over time reminds us to be cautious to not judge people of the past based on modern expectations or understandings. When questions arise about the historical or doctrinal meaning of specific words, it is always important to know how those words were used in their proper historical context, especially in legal or technical settings. Failing to do so might easily lead modern readers to confusion and misunderstanding.24

Third, Oliver Cowdery’s response to this question, as raised by Cornelius C. Blatchly, teaches us an important lesson. In responding to sincere questions, it is always important to give the questioner the benefit of the doubt. Blatchly was obviously sincere and open-minded since he published Oliver’s response without embellishment and carefully weighed his reply before answering. Just like Blatchly asked a sincere question, Oliver tried to give a sincere answer. He did not jump to conclusions or assume bad faith on Blatchly’s part. The importance of responding to sincere questions (in others and in ourselves) in non-judgmental and helpful ways has been emphasized in recent years by Latter-day Saint leaders.25

Whatever ambiguity there may be in the technical or legal designation of Joseph Smith as the “author and proprietor” of the Book of Mormon, there is abundant historical documentation affirming that Joseph and the other witnesses of its coming forth gave a consistent, undeviating, and believable account of its miraculous origin.26