Why Did Christ Perform Miracles? 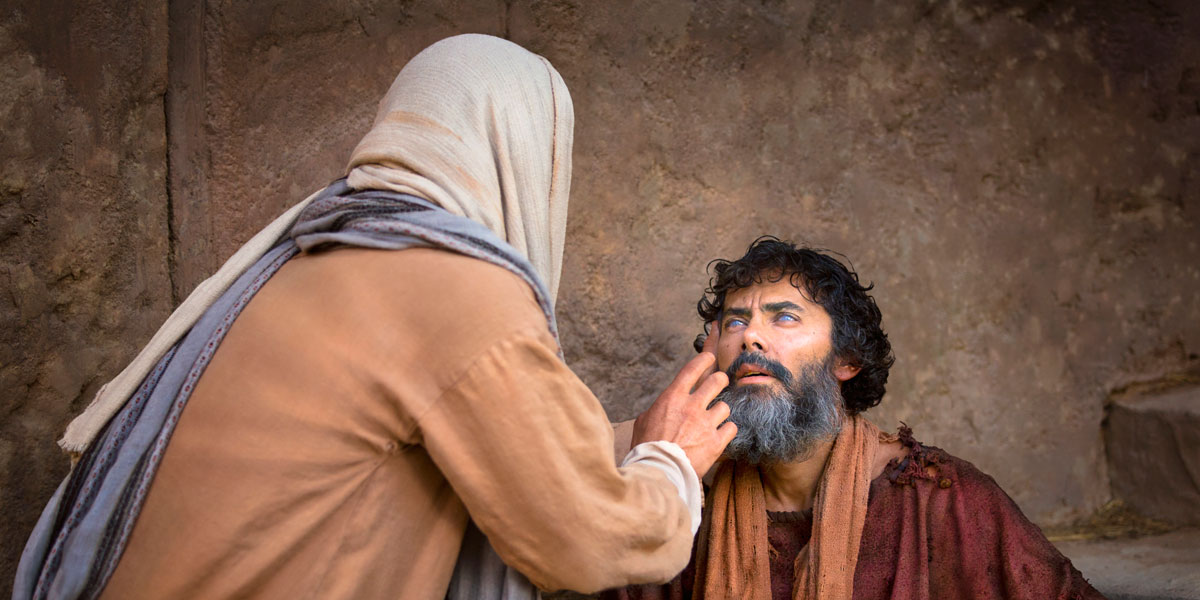 Jesus healing a blind man. Image via lds.org
And he “shall go forth amongst men, working mighty miracles . . . , and even after all this they shall consider him a man, and say that he hath a devil.”

In his ministries, both as found the New Testament and in the Book of Mormon, Jesus performed many miracles. He healed the sick, raised the dead, and cast out devils (see Mosiah 3:5–6). It is easy to see that these actions were important to Him because He delayed His departure from Bountiful, in part, so He could perform more miracles among the people (see 3 Nephi 17:4–7). In the Old World as well, He spent much of His time healing vast numbers of people (see, for example, Matthew 12:15).

Jesus Loved Those in Need

One reason Christ performed miracles was that He had deep compassion for those who were suffering. When He was with the Nephites in the New World, He said, “Behold, my bowels are filled with compassion towards you. Have ye any that are sick among you? … Bring them hither and I will heal them, for I have compassion upon you; my bowels are filled with mercy” (3 Nephi 17:6–7). The same is true of the miracles He performed in the Galilee. When a centurion asked Jesus to come to his house to heal someone, Jesus had compassion on him and was willing to go to the man’s house despite the stigma associated with helping the Romans (Matthew 8:7).

Another reason Christ performed miracles was to show that He was more powerful than death. 3 Nephi 26:15 records that when Christ was in the New World, he “raised a man from the dead.” Christ showed that He had this power when He was in the Old World as well. John 11:43–44 records that Christ raised His friend Lazarus from death, announcing that He is the resurrection and the life (see John 11:25).

Power Over Destructive Forces of Nature

Christ also performed miracles to show that He had power of the destructive forces of nature, including disease. 3 Nephi 17:9 specifically states that the multitude brought their sick and afflicted to Christ and that He “did heal them every one as they were brought forth unto him.” In the Old World, Christ also showed His power over disease and the forces of destruction in nature by stilling a storm on the Sea of Galilee (Mark 4:39) and by healing people with various diseases (Matthew 4:24).1 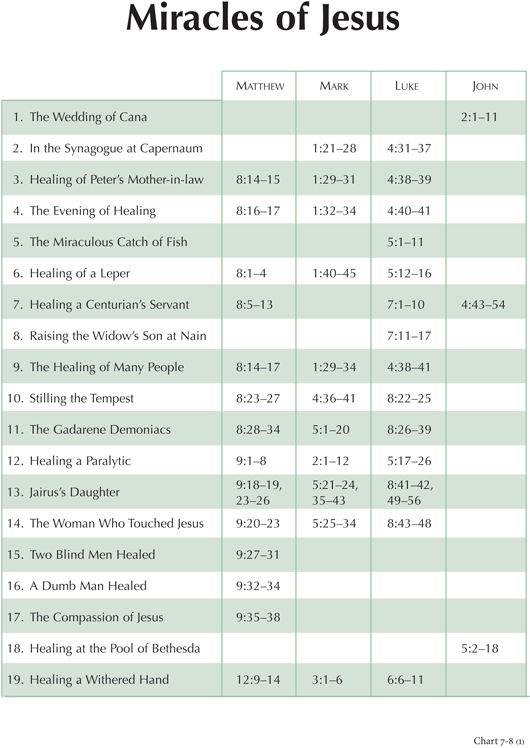 The Miracles of Jesus, Charting the New Testament, 7-8

So That Some Would Recognize the One Who Had Been Prophesied

Another major purpose of Christ’s miracles was to show that He fulfilled prophecy.2 In Mosiah 3:5, King Benjamin said that when Christ came, He would “go forth amongst men, working mighty miracles, such as healing the sick, raising the dead, causing the lame to walk, the blind to receive their sight, and the deaf to hear, and curing all manner of diseases.”3 This is exactly what Christ did when He visited the people in the Americas. 3 Nephi 16:15 states that Christ “healed all their sick, and their lame, and opened the eyes of their blind and unstopped the ears of the deaf, and even had done all manner of cures among them, and raised a man from the dead.” The Nephite recordkeepers evidently wanted readers to understand that Jesus Christ had done exactly what King Benjamin said He would do, because 3 Nephi 16 specifically states that Christ performed all six miracles listed in King Benjamin’s speech.

Christ’s miracles also fulfilled a prophecy found in the Dead Sea Scrolls. The scroll known as 4Q541, fragment 9, column 1 states, “They will utter many words against him, and an abundance of lies; they will fabricate fables against him, and utter every kind of disparagement against him. His generation will change the evil … established in deceit and violence.”4 Christ’s life fulfilled much of what was said here, and His miracles certainly helped to reverse much of the evil wrought through the deceit and violence of the world. Another Dead Sea Scroll, the Messianic Apocalypse (4Q521), similarly states that the Messiah would perform miracles. The prophecies mentioned in the verses in Isaiah 61 that Jesus quoted at the synagogue in Nazareth were also be fulfilled by His healings.

Another reason Christ performed miracles was to show that He was a prophet like Moses.5 In 3 Nephi 20:23, Jesus declared that He is indeed the prophet like Moses, prophesied of in Deuteronomy 18:15, “I am he of whom Moses spake, saying: A prophet shall the Lord your God raise up unto you of your brethren, like unto me” (emphasis added). Christ’s miracles may have reminded the people of that ancient prophecy.

Indeed, Jesus was like Moses in many ways. For one thing, both miraculously provided food and drink to the multitude. Christ gave bread to the gathered multitude, despite the fact that “there had been no bread, neither wine, brought by the disciples, neither by the multitude; but he truly gave unto them bread to eat, and also wine to drink” (3 Nephi 20:6–7).6 Likewise, Moses interceded with the Lord, and when the children of Israel were in the wilderness, the Lord sent Manna (a bread-like substance) from heaven (see Exodus 16:15) and miraculously brought forth water from a rock (17:6).

So That Jesus Would be Killed

King Benjamin said that Christ would, “go forth amongst men, working mighty miracles, such as healing the sick, raising the dead, causing the lame to walk, the blind to receive their sight, and the deaf to hear, and curing all manner of diseases. And he shall cast out devils.” But, “even after all this they shall consider him a man, and say that he hath a devil, and shall scourge him, and shall crucify him” (Mosiah 3:5–9). In some ways, Christ’s miracles caused this to come to pass. New Testament scholar John W. Welch has argued that when Christ raised Lazarus from the dead, He knew this act would likely lead to his execution.7

This was because of the law in Deuteronomy 13:1–5, which required the death penalty for those who gave “signs” and used them to lead people into what some might consider apostasy, or worshipping in other ways. Obviously, Caiaphas and others who thought that Jesus was a deceiver were misled, but they used the law in Deuteronomy as their legal justification for killing Christ.8 As the Gospel of John says several times, the leaders of the Jews in Jerusalem thought that Jesus “had a devil” that he “deceived the people,” and so should die.9 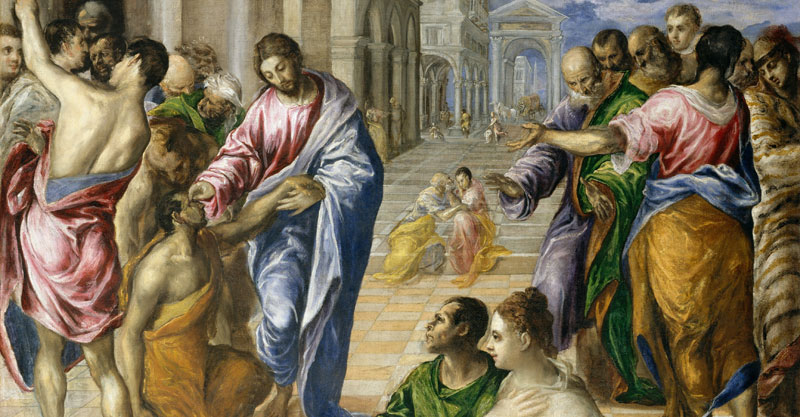 As we read about the miracles that Christ performed in 3 Nephi, it becomes clear that Jesus performed miracles in many ways that were unique to Him. Having the multitude bring their sick and afflicted to Him so He could heal them one at a time is not something that happen very often, if at all.10 Christ’s ministry to the people at Bountiful surely would have been a unique and poignant experience for them.11

Miracles are still performed today, such as healing the sick and lame, yet it should be understood that Christ is ultimately the source of all these miracles.12 That is why they must be performed in His holy name, and through His authority and power. In this way, it is clear to all who witness them that “all these gifts come by the Spirit of Christ” (Moroni 10:17). In this way, the modern miracles seen in the church are like the miracles in 3 Nephi—they all stem from Christ.

Perhaps one of the most important reasons of all that Christ performed miracles was to remind us that He is the creator of the world and the master of creation.13 He created all things, and can heal all things. Besides reminding us that He was the prophet like Moses and the one that had been prophesied, the miracles of Christ in 3 Nephi remind us that Christ is the God of the whole earth and that He is in control. He alone had the power to lay down his life and to take it up again. With all this assurance, we can have faith in His power to perform miracles in our lives today and to overcome mortality. “For as in Adam all die, even so in Christ shall all be made alive” (1 Corinthians 15:22).