Why Is the Timing of the Book of Mormon’s Translation So “Marvelous”? 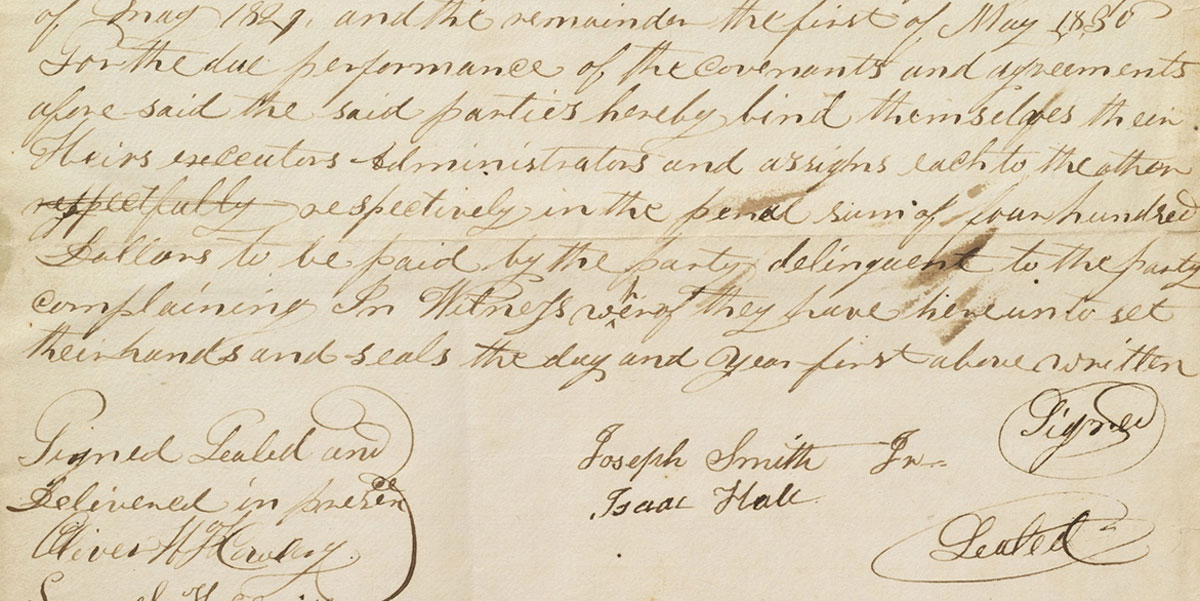 The Book of Mormon presents itself to the world as a miracle and as a sign that God has begun the process of gathering scattered Israel, as He anciently covenanted to do (see 3 Nephi 21:1–4; 29:1). For this and other reasons, many people have naturally been interested in the details of its coming forth, including the timing of its translation.

Various historical sources combine to prove that the English text of the Book of Mormon (as it was published in 1830) was essentially translated between April 7 and June 30, 1829. Fortunately, ongoing research has expanded and refined our understanding of many things that happened during and around these crucial three months. Drawing upon this research, the following summaries demonstrate why people can be confident that the vast majority of the Book of Mormon was translated within that narrow window of time.

Compelling data confirm the dates of five key events during the translation timeline. Regarding the first, Oliver Cowdery stated that he first arrived in Harmony, Pennsylvania, in the evening of April 5, 1829, that he helped Joseph with “some business of a temporal nature” on April 6, and that on the very next day, April 7, he “commenced to write the Book of Mormon,”1 as Joseph’s scribe.

Remarkably, a legal document discovered not long ago at a county courthouse near Harmony, Pennsylvania, bears Oliver’s handwriting and signature. It demonstrates that he served as a witness to an agreement dated April 6, 1829, between Joseph Smith and his father-in-law, Isaac Hale. On that day, Joseph purchased property from Hale on which stood the log cabin that Joseph and his wife Emma were living in.2 Oliver’s signature confirms that he was indeed with Joseph in Harmony on April 6, 1829, and now we know the nature of that notable “temporal” matter that he helped Joseph with on that precise day.

Such accuracy strongly invites and builds trust that Oliver was also correct about beginning his work as a scribe the very next day (April 7). He and Joseph worked in what we now know was Joseph’s newly purchased home—a place where they could hopefully work without disruptions. Four other dates, including the day by which the translation was surely completed (June 30), are each supported by other similarly credible documentation. Together, these five dates have been referred to as “anchor dates” because they help anchor reported details to specific days within the proposed translation timeline:3

Thirteen revelations, each included in the Doctrine and Covenants, as well as a document called the “Articles of the Church of Christ,” were written during the time when the Book of Mormon was being translated. Not only do some of the words in those revelations correspond to details in historical reports of certain events during April, May, and June 1829, but in several cases they reflect words or ideas found in the Book of Mormon translation itself. This suggests that as the content of the Book of Mormon was received, further revelations and inspiration may have built upon what had just been revealed in its pages.

Time Needed to Attend to Practical Tasks and Needs

In addition, several practical matters arose during the time of the translation that required time and attention, as has been independently confirmed by documentary evidence. For instance, Joseph once commented upon his poverty during the period of translation and that he petitioned the Lord for help.5 Joseph mentioned that shortly after his brother Samuel arrived (sometime in May),6 a Mr. Joseph Knight “several times brought us supplies (a distance of at least thirty miles) which enabled us to continue the work” of translation.7

Knight’s own account perfectly agrees with this situation. He repeatedly commented upon Joseph’s poverty, mentioned his multiple visits to supply Joseph and Oliver with necessary provisions, and even mentioned that Samuel Smith was present at the home.8 Historian Richard Lloyd Anderson described Knight’s recollection as “a talkative account that displays little awareness of what the Prophet had independently said.”9

In about twenty cases, details such as these help flesh out the proposed timeline.10 They also help confirm that the translators were accurate and truthful in their description of events and circumstances surrounding the translation.11

Estimating the Timing of the Translation

When combined together, the established anchor dates, revelations, and other supporting historical details give a nuanced and consistent view of the timing of the translation. On its face, the timeframe between April 7 and June 30 allows 85 possible days for the translation, but we know that on many of these days the translators were also engaged in other activities: doing farm chores, entertaining visitors, making trips to Colesville, receiving priesthood authority and additional revelations, baptizing Samuel and Hyrum Smith, moving from Harmony to Fayette, acquiring the Book of Mormon’s copyright, and so forth.12

Book of Mormon scholar John W. Welch has suggested that with these known disruptions and time constraints accounted for, “not many more than the equivalent of about 60 actual working days would have been available in April, May, and June 1829.”13 Terryl Givens described this rate of translation as “truly prodigious,”14 and Welch concluded that by “any standard” the pace was “blistering.”15

Some may wonder if translating the entire Book of Mormon in so short a time was even humanly possible. In order to answer this question, Welch calculated how quickly the translators would have needed to work in order to accomplish their task in the allotted time. Welch explained, “Several of the resulting hours-per-day and words-per-minute options yield elapsed time figures that fall within the realm of feasibility, but the latitude is not wide. The parameters here do not allow much variation beyond the values shown on this graph.”16 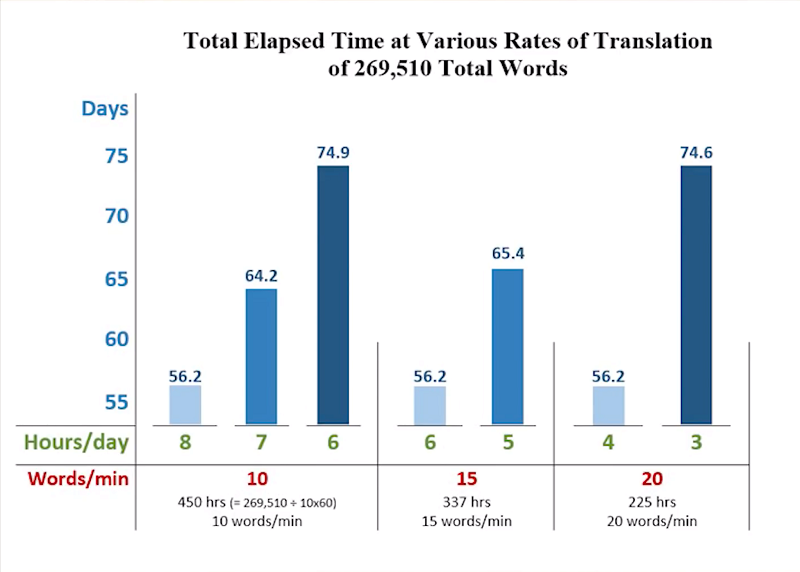 Estimated rates of translation needed for the proposed timeline.

In order to test these estimated possibilities, Welch and his wife Jeannie informally replicated the process of translation as described by the witnesses, with one of them dictating the text and the other acting as scribe. They then recorded how many words they were able to produce per minute on average. They found the experience to be so insightful that they then tested out the process in their stake scripture class.17

Their combined results, while not strictly scientific, suggest “that a translation rate of right around 20 words per minute was quite possible.”18 Yet those who participated also felt that they couldn’t have sustained that pace very long without time for breaks. They reported, “Our hands got tired, and the one playing Joseph needed to catch his or her breath and clear his or her voice.”19 Moreover, they were using ballpoint pens, whereas Oliver Cowdery would have often needed some time to dip his quill pen and refill it with ink.20 Thus, while it is difficult to determine exactly how quickly on average the translation was carried out, it reasonably fell within the needed estimated range (10–20 words per minute) in order for the entire project to have been completed between April 7 and June 30. 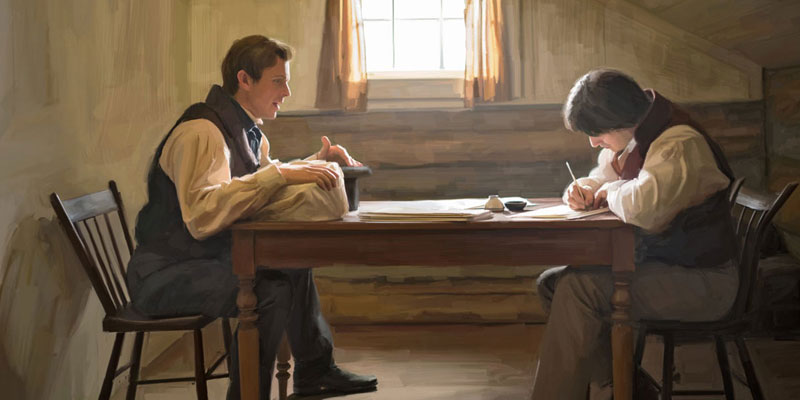 Joseph Smith translating the Book of Mormon via lds.org

This recent data and analysis demonstrate “that the historical documents relating to this somewhat obscure chapter in early Latter-day Saint history interlock more accurately than might otherwise have been expected.”21 As a result, readers can now trust, better than ever before, that the Book of Mormon was truly dictated in an astonishingly short amount of time.

Lengthy novels often take many months and sometimes even years to write. The process usually involves preliminary research, long periods of creating and revising multiple drafts, and collaborative editing. The Book of Mormon, however, was produced in a very different manner. Its 269,510 words,22 originally printed onto 588 pages,23 were revealed to Joseph Smith through divinely prepared translation instruments.24 Between April 7 and June 30, Joseph Smith dictated these words day after day, for hours on end, in the presence of multiple scribes and witnesses, without any outlines, preliminary drafts, working notes, reference materials, or substantive revisions.26

The rapid pace of the Book of Mormon’s translation under these unique circumstances can help readers understand, at least in part, why the Lord referred to it as “a marvelous work and a wonder” (2 Nephi 27:26). Such a feat would surely be impressive, even coming from a skilled and accomplished writer. Yet coming from Joseph Smith—a 23-year-old farmer with little formal education and no literary achievements to speak of—it is truly wondrous.26

As Welch concluded, “awareness of how the Book of Mormon came forth may inform, if not transform, a reader’s reception of it” in several ways.27 It “amplifies the significance of many kinds of details,” can “generate new questions,” helps “provide more developed answers,” and “may add to any reader’s literary and devotional appreciation of the Book of Mormon” and of its openly stated purposes.28 In sum, “the feat of bringing forth the Book of Mormon within its tight time frame increases appreciation for the achievement of the Prophet Joseph Smith, which can, in turn, increase awe and rev­erence for God and the word of God.”29

John W. Welch, “April 7th and the Commencement of the Translation of the Book of Mormon,” BMC Conference, April, 2018, online at bookofmormoncentral.org.