Why Did the Book of Mormon Come Forth as a Miracle? 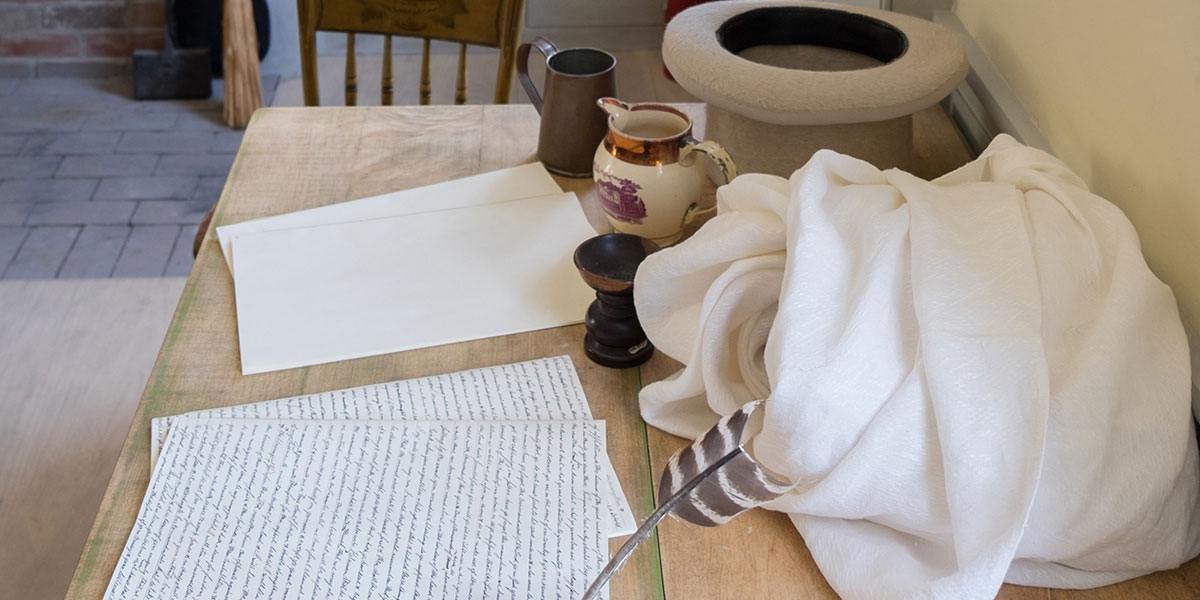 Translation setting in the restored home of Joseph and Emma Smith via Church History Website
"For behold, I am God; and I am a God of miracles; and I will show unto the world that I am the same yesterday, today, and forever."

Joseph Smith declared that he translated the Book of Mormon “by the gift and power of God.”1 His wife Emma once remarked, “though I was … present during the translation of the plates, and had cognizance of things as they transpired, it is marvelous to me, ‘a marvel and a wonder,’ as much as to anyone else.”2 Emma’s statement seems to reference Nephi’s commentary on Isaiah, wherein Nephi taught that the Lord God would bring forth, in His own due time, a book “of those who had slumbered” (2 Nephi 27:6), which would be “a marvelous work and a wonder” (v. 26, cf. Isaiah 29).

The Lord explained, “For behold, I am God; and I am a God of miracles; and I will show unto the world that I am the same yesterday, today, and forever” (2 Nephi 27:23). Those who familiarize themselves with the translation process of the Book of Mormon can come to understand, much as Emma Smith did, the many things that were extraordinarily miraculous about this “marvelous work and a wonder” (v. 26). 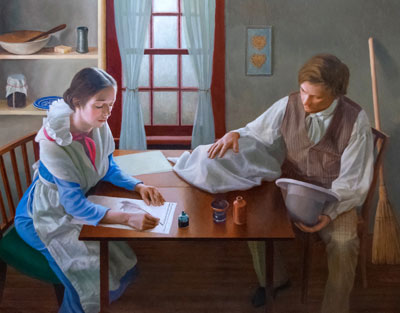 While Joseph Smith himself was often reluctant to even try to explain the specific details of the translation,3 those who assisted in or witnessed the process left several accounts of what they observed or understood to have transpired.4 Over two hundred historical records have survived from people who were close to this process or were in a position to report what they had learned from firsthand participants.5

For example, several people reported that, after placing the stones from the Urim and Thummim or a seer stone into his hat, Joseph would pull the brim of the hat around his face to shield the stone(s) from the ambient light.6 Then he would dictate “for long periods of time without reference to any books, papers, manuscripts, or even the plates themselves.”7 While the use of the hat may seem strange today, it served a needed and practical purpose. The fact that Joseph had his face in the hat also offers solid evidence that he was not reading from any drafts, outline, or the Bible, as he dictated.8 Has any other book been written that way?

As recorded by Edward Stevenson, Martin Harris claimed that in the seer stone, “sentences would appear and were read by the Prophet,” whereupon the scribe “would say, ‘Written.’”9 In addition, David Whitmer reportedly explained that the “scribe would then read the sentence written, and if any mistake had been made the characters would remain visible to Smith until corrected.”10 Some of the scribes recalled Joseph Smith even correcting their spelling, despite him not looking at their manuscript.11

Emma remembered, “When he stopped for any purpose at any time he would, when he commenced again, begin where he left off without any hesitation.”12 These breaks would sometimes occur when they stopped for lunch, or to sleep at night. Other times the translation would resume after a trip to Colesville or Fayette, yet without any obvious disruption to the flow or content of the text. 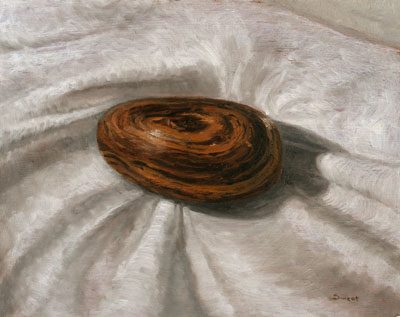 On some occasions, Joseph was surprised by the words that he was dictating. At one point, he was startled by the Book of Mormon’s assertion that Jerusalem was a walled city.13 As Martin Harris put it, “Joseph knew not the contents of the Book of Mormon until it was translated.”14

When collected together and analyzed, these types of direct observations from the various participants and witnesses tell a fairly consistent story about what transpired during the translation process.15 Through decades of research on the Book of Mormon Critical Text Project,16 Royal Skousen discovered that these reported details are substantially confirmed by the scribal evidence found on the original and printer’s manuscripts.17

For instance, based on the types of errors that the scribes made, it is clear that they were mishearing orally dictated words, rather than simply misreading a manuscript from which they were visually copying.18 Various types of scribal corrections similarly confirm the story of the text being dictated and then restated by a scribe.19 Based on the delayed inclusion of chapter numbers as well as unexpected book divisions, Joseph Smith and his scribes apparently “did not know in advance what the text was going to say.”20 And from inline (not above the line) corrections, it seems that the spelling of names and the proper transcription of unfamiliar words or expressions were, at least on some occasions, “imposed down to the very letter.”21 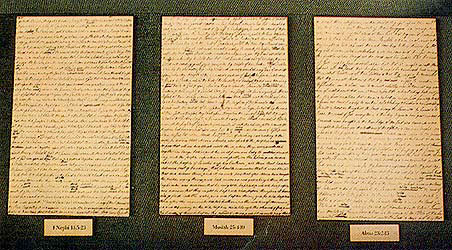 Three pages from the Printers manuscript via lds.org

Amazingly, except for a few pages, the translation of the entire Book of Mormon as we have it today—a text which ended up as more than 500 pages in length—took place between April 7 and June 30, 1829.22 Given other things that are known to have happened during those three months, this was all produced in, at the very most, 74 available days, if Sundays are included. But assuming that Joseph and Oliver did not work full days, seven days a week, week in and week out, it is reasonable to estimate that Joseph dictated the Book of Mormon in approximately “63 working days.”23

John W. Welch suggested that, with all other activities accounted for, this would result in an average translation rate of “eight present Book of Mormon pages per day,” a pace which he described as “blistering.”24 Has any other book in the history of the world ever been produced in this fashion, under such circumstances, by a first-time writer, who had never before published a word?

The Book of Mormon presents itself to the world as a miracle. In the words of Jesus, the coming forth of this book was intended to serve as “a sign” that people might “know that the work of the Father hath already commenced unto the fulfilling of the covenant which he hath made unto the people who are of the house of Israel” (3 Nephi 21:7). Like the miraculous signs given by Jesus and recorded in the Gospel of John, the Book of Mormon is a wondrous sign of the commencement of God’s new and everlasting work in the dispensation of the latter days.25 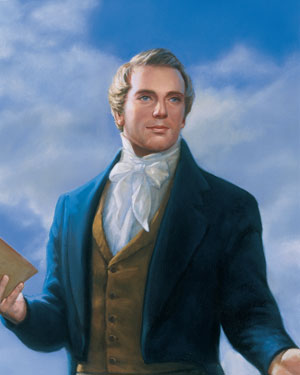 The mere presence of the Book of Mormon is a miracle. Joseph Smith himself probably could not have explained how it all happened, how the words appeared to his view, and how he was able to dictate and control what was written down, any more than Moses could explain mechanically how Aaron’s rod could become a snake that devoured the rods of Pharaoh (see Exodus 7:12) or than Peter could explain medically how he healed the lame man at the gate of the Temple (see Acts 3:6).

The book came forth as a miracle to fulfill the prophecy of Isaiah. Elder Neal A. Maxwell stated that because the Book of Mormon “so amply fulfilled Isaiah’s [and Nephi’s] prophecy of a ‘marvelous work and a wonder,’ we may find strengthened faith in considering how marvelous and wondrous the translation really was.”26 That strength was designed to undergird personal testimonies everywhere of the truthfulness of the Book of Mormon and the prophetic work of Joseph Smith.

Joseph Smith was no “detached scholar in some sheltered sanctuary where he could work at his uninterrupted leisure. Chores had to be done. His family had to be cared for.”27 He was a hardworking farmer with limited education and no notable literary attainments to speak of.28 Yet somehow, inside of three months, he was able to produce—in the presence of multiple scribes and witnesses—a lengthy, complex, consistent, and theologically rich historical record.29 If this book had come forth in normal academic ways, it would carry more intellectual weight, to be sure; but it would come with less authoritative endorsement from God, and would not stand as a sign that God has brought it forth at a particular time, by a certain prophetic messenger, and for divine purposes.

Despite frequent interruptions, Joseph accomplished this in one draft, day after day, picking up right where he left off, and without any working notes or reference materials. Not only do the testimonies from multiple scribes and observers strongly agree on the essential details of this process, but their story has been abundantly confirmed by various types of scribal evidences from the original manuscripts.30 This miracle gives the English translation of the Book of Mormon a level of authority and credibility not offered by any other known volume of sacred scripture. 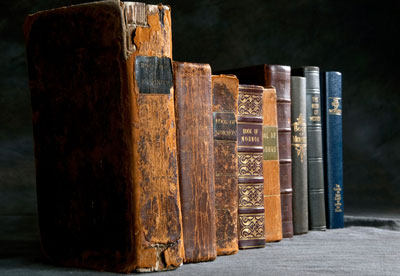 Editions of the Book of Mormon. Photographer unknown.

Such a miraculous and well documented historical feat offers remarkable evidence, to any person willing to look, that Joseph Smith was a true prophet and that the text he produced truly came forth, as Nephi foresaw, by the “gift and power of the lamb” (1 Nephi 13:35). When this evidence is combined with the other evidences—such as the “supernatural vision” of the three witnesses,31 the eight witnesses’ “tactile experience” with the plates,32 and the numerous informal witnesses of the plates33—it becomes increasingly apparent that the coming forth of the Book of Mormon was nothing short of marvelous. Is there better evidence anywhere that God is still “a God of miracles” (2 Nephi 27:23)34 and that “the day of miracles” has not ceased (Moroni 7:35–37)?

Such a convergence of data and testimonies may not provide absolutely compelling proof of the Book of Mormon’s divine authenticity. But it certainly provides ample reason to prayerfully seek out a testimony of its truthfulness, or to maintain faith in a spiritual witness that has already been obtained.35 As Neal Rappleye has concluded, “It is impossible to prove that something is miraculous or divine, but all of the above evidence is consistent with the story told by Joseph himself—that he dictated a text given to him by revelation, through the medium of an ‘interpreter,’ or a seer stone.”36 To this day, Joseph’s story seems to be the only consistent explanation ever offered.37

Daniel C. Peterson, “A Response: ‘What the Manuscripts and the Eyewitnesses Tell Us about the Translation of the Book of Mormon,’” in Uncovering the Original Text of the Book of Mormon: History and Findings of the Critical Text Project, ed. M. Gerald Bradford and Alison V. P. Coutts (Provo, UT: FARMS, 2002), 67–71.

Royal Skousen, “How Joseph Smith Translated the Book of Mormon: Evidence from the Original Manuscript,” Journal of Book of Mormon Studies 7, no. 1 (1998): 22–31.