Book of Mormon Central / KnoWhys
Who Are the "Few" Who Were Permitted to See the Plates? 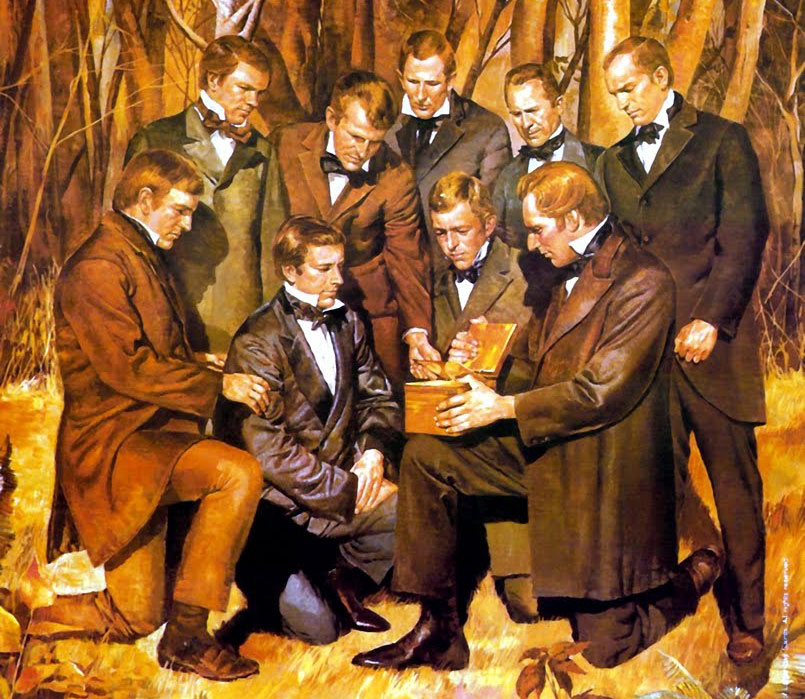 Eight Witnesses View the Book of Mormon Plates by Dale Kilbourn
“The book shall be hid from the eyes of the world, that the eyes of none shall behold it save it be that three witnesses shall behold it, by the power of God … And there is none other which shall view it, save it be a few according to the will of God”

As part of his prophecy about the Restoration and coming forth of the Book of Mormon, Nephi saw that “at that day when the book shall be delivered … [it] shall be hid from the eyes of the world.” Nephi did, however, specify that “three witnesses shall behold it, by the power of God … and they shall testify to the truth of the book and the things therein” (2 Nephi 27:12).

It is likely that the translation of this passage prompted Oliver Cowdery, David Whitmer, and Martin Harris to seek an opportunity to see the plates as the Three Witnesses Nephi mentioned.1 Oliver remembered, “It was a clear, open beautiful day” when they saw the angel and the plates,2 probably in late-June 1829.3 Though they each left the Church for a time, all three frequently, and unashamedly, bore witness to seeing the plates throughout their lives.4 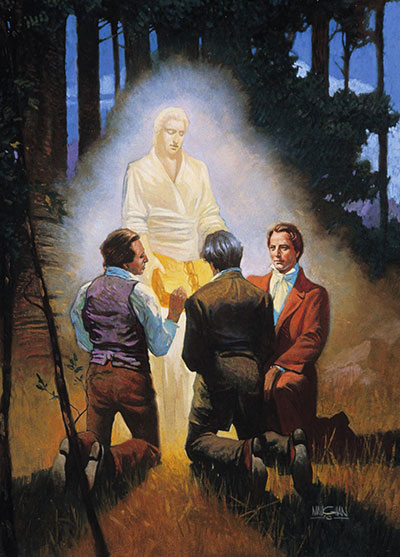 In addition to the three, Nephi also saw that there would “be a few [which shall view it] according the will of God, to bear testimony of his word unto the children of men” (2 Nephi 27:13). In 1 Peter 3:20, the author talks about “the days of Noah … wherein few, that is, eight souls were saved by water” (emphasis added). Since Nephi also used the word few, it is plausible that Joseph Smith understood that word to call for eight further witnesses.

It was probably later that same week in June 1829, that the eight further Book of Mormon Witnesses were shown the plates and, unlike the Three, they were allowed to handle them.5 These were Joseph Smith Sr., Hyrum Smith, Samuel H. Smith, Hiram Page, Christian Whitmer, Jacob Whitmer, Peter Whitmer Jr., and John Whitmer. Like the Three Witnesses, none of the Eight ever denied their testimony, despite some leaving the Church.6

These witnesses were expected to “testify to the truth of the book and the things therein” and “to bear testimony of [God’s] word unto the children of men” (2 Nephi 27:12–13). While this was fulfilled with their statements published in the Book of Mormon, each of these men took their call to testify seriously and made several statements throughout their lives describing their experience with the plates.7

In March 1876, when only he and his brother David remained of the eleven witnesses, John Whitmer reflected:

I have never heard that any one of the three or eight witnesses ever denied the testimony that they have borne to the Book as published in the first edition of the Book of Mormon. … Our names have gone forth to all nations, tongues and people as a divine revelation from God. And it will bring to pass the designs of God according to the declaration therein contained.8 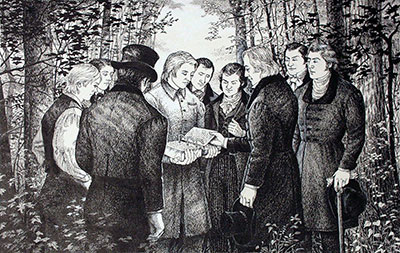 Nephi also stated that the Lord would show the plates to “as many witnesses as seemeth him good” (2 Nephi 27:14). Many Latter-day Saints are not aware that, consistent with this verse of scripture, there were other, “unofficial” witnesses to the plates. Most of these people had accidental or incidental experiences with the plates. Josiah Stowell, for instance, caught a glimpse of the plates when a corner of the covering slipped off as Joseph handed them to him.9

Significantly, Mary Whitmer, mother of four of the Eight Witnesses, had a divinely sanctioned encounter. She was shown the plates by the angel Moroni.10 Other women, such as the prophet’s mother Lucy, and his wife Emma, interacted with the plates, bore witness of their reality and testified to the truth of the Book of Mormon.11

Terryl Givens, for example, said that their testimonies provide “an evidentiary spectrum, satisfying a range of criteria for belief.”13 Richard Lloyd Anderson similarly noted, “The testimonies of the Three and Eight Witnesses balance the supernatural and the natural.”14

Steven C. Harper, of the Church Historical Department, wrote that the witnesses’ testimonies “are some of the most compelling evidence in favor of its miraculous revelation and translation” and went so far as to say that, “For believers,” such testimony “approaches proof of Joseph Smith’s miraculous claims.”15

Richard L. Bushman explained that, “The witnesses’ statements were an effective demonstration of authenticity for a skeptical age.” To that, he added, “Secular historians have never come to grips with the fact that none of the eleven who saw the plates (in addition to Joseph Smith) ever recanted.”16 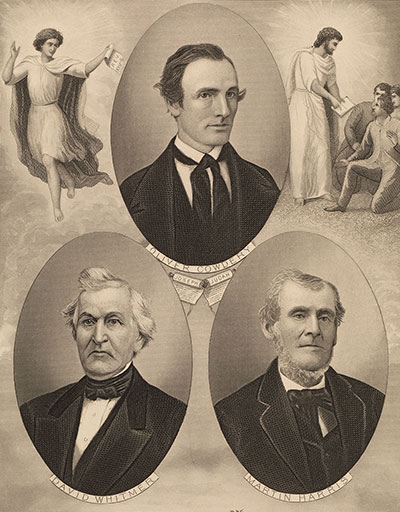 Yet there is more value to their witness than mere evidence. Each of the witnesses—in his or her own, unique way—offers an example of dedication, commitment, faith, and sacrifice. None were neutral observers. They were faithful and committed individuals, who were granted their witness because of their hard work, sacrifice, and dedication.

After seeing the plates, all of them bore witness to what they knew to the end of their lives, even as some “tended to compete rather than cooperate with [Joseph Smith’s] leadership.”17 When outside the Church, some faced immense peer-pressure to deny their testimonies, yet held firm to what they saw and heard.

For example, William E. McLellin was an early Mormon who personally knew all of these Book of Mormon Witnesses. In a recently found collection of his writings, McLellin tells of instances where one of the witnesses stood by his testimony even when subjected to “beating and pounding . . . with whips and clubs.” On another occasion, with their lives threatened by mobbing and lynching, David Whitmer and Oliver Cowdery adamantly testified to McLellin, “Brother William, God sent his holy angel to declare the truth of the translation of it to us, and therefore we know. And though the mob kill us, yet we must die declaring its truth.” Said McLellin, “Boys, I believe you. I can see no object for you to tell me falsehood now, when our lives are endangered.”18

People all over the world have much to learn today from—and owe a deep debt of gratitude to—the Book of Mormon Witnesses as well as many others involved in the early events of the Restoration.

Royal Skousen, “Another Account of Mary Whitmer’s Viewing of the Golden Plates,” Interpreter: A Journal of Mormon Scripture 10 (2014): 35–44.