Why Were the Plates Present During the Translation of the Book of Mormon? 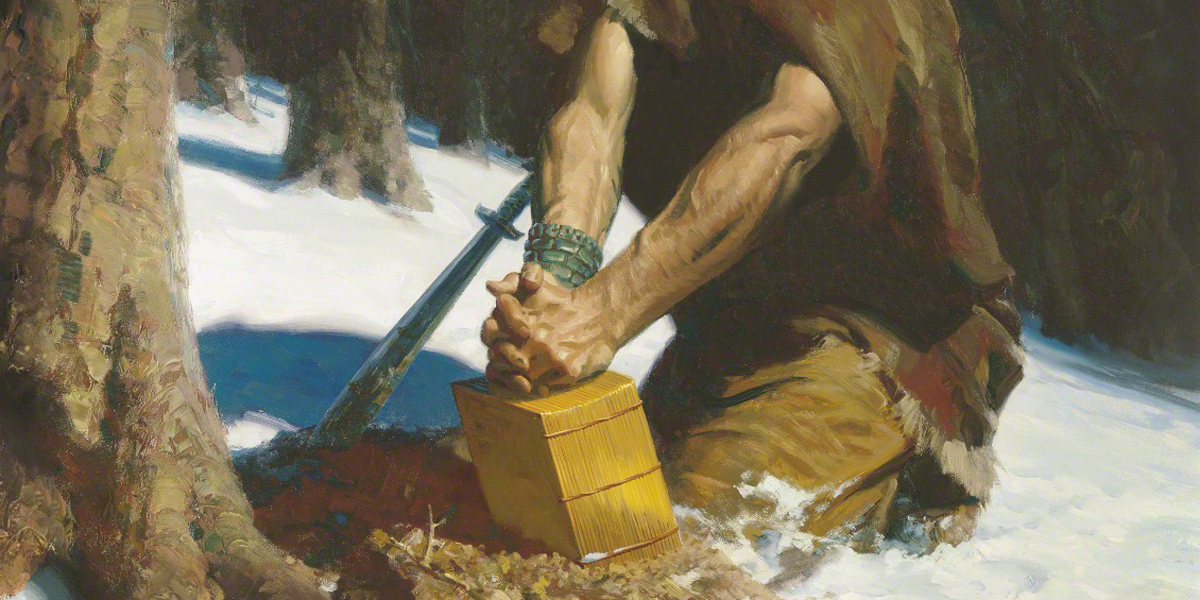 Moroni Hides the Plates in the Hill Cumorah (Moroni Burying the Plates), by Tom Lovell
“O my sons, I would that ye should remember that these sayings are true, and also that these records are true. … and we can know of their surety because we have them before our eyes.”

People are sometimes surprised to discover that the plates of the Book of Mormon were not regularly used during the process of its translation.1 While translating, Joseph Smith would typically place his face into a hat to block out ambient light.2 He would then, according to witnesses, read aloud the words which miraculously appeared in a seer stone or in the interpreters, and a scribe would record them.3

As for the plates themselves, Emma Smith reported that they “often lay on the table without any attempt at concealment, wrapped in a small linen table cloth.”4 Other witnesses recalled that on a few occasions they were kept “in a nearby box under the bed or even hidden in the Whitmer’s barn during translation.”5 This has caused some to wonder why the plates were necessary at all. If Joseph Smith wasn’t actively consulting them during the translation, then why were they covered with a cloth and placed in some nearby and usually visible location?

Initially, the plates did serve a practical purpose. Joseph Smith copied down some of their engraved characters, and Martin Harris took them to several distinguished scholars back east to verify their authenticity, as well as Joseph’s ability to translate them.6 Martin, who eventually mortgaged his farm to fund the publication of the Book of Mormon, came away from this trip more convinced than ever that the plates were both real and authentic.7

There is also some indication that Joseph was at least occasionally aware of the relationship between the plates and the words he was dictating. He once explained that “the Title Page of the Book of Mormon is a literal translation, taken from the very last leaf, on the left-hand side of the collection or book of plates.”8 David Whitmer once stated that while looking into the seer stone, Joseph Smith saw a “parchment, on which would appear the characters of the plates in a line at the top, and immediately below would appear the translation in English.”9 How well Joseph Smith regularly understood the correlation between the English text and the characters on the plates, however, is uncertain.

Another important consideration is that the presence of the plates helped confirm Joseph Smith’s revelatory claims.10 Anthony Sweat insightfully noted, “The Book of Mormon text didn’t just pass through Joseph’s trance-induced revelatory mind; its palpable relics passed through a clothing frock, hollowed log, cooper’s shop, linen napkin, wooden chest, fireplace hearth and barrel of beans.”11 According to Michael MacKay and Gerrit Dirkmaat, the plates were “in essence the body for the spiritual words that fell from Joseph Smith’s lips as he translated,” and they helped instill “confidence in the minds of Joseph and his family and friends” that his words were derived from an actual ancient record.12

While the participants and observers involved in protecting and translating the plates weren’t allowed to view them directly, they often encountered them through senses other than sight. Drawing upon multiple historical accounts, Neal Rappleye explained, “They felt, lifted, and moved this object around (while covered). They could feel the weight, contours, and shape of the object well enough to discern that it was not blocks of wood or stones. They could lift the individual pages (or plates), hear them make a metallic rustling sound as they moved, and feel that they were bound by three rings.”13

Even though they most often lay covered and unused on the table, they provided a constant visual reminder of the Book of Mormon’s tangible reality.14 As King Benjamin taught, “O my sons, I would that ye should remember that these sayings are true, and also that these records are true. … and we can know of their surety because we have them before our eyes” (Mosiah 1:6).15

In addition to these practical considerations, the plates meaningfully represented the presence of the Lord and His involvement in the translation process. This spiritual symbolism can be drawn out from several scriptural accounts, where the Lord openly revealed Himself to a chosen prophet but then obscured His identity by some type of veil when other followers were present.

When leading the Israelites through the wilderness, the Lord privately spoke with Moses “face to face” (Exodus 33:11). But when making His presence known to the entire camp, He covered Himself “by day in a pillar of a cloud … and by night in a pillar of fire” (Exodus 13:21). Similarly, when the Jaredites journeyed toward their promised land, the “Lord did go before them, and did talk with them as he stood in a cloud, and gave directions whither they should travel” (Ether 2:5). Only the brother of Jared, their prophetic leader, was able to see beyond the veil and enter into the presence of the Lord” (Ether 3:6–20).

Just as Moses and the brother of Jared were the only ones allowed to fully enter into the Lord’s presence, Joseph Smith was the only one initially allowed to fully view the plates. For everyone else, the plates, like the Lord Himself, were present and yet veiled—just out of sight, but never fully out of mind. In the Israelite and Jaredite exodus stories, the Lord’s veiled presence provided a visible reminder that it was truly God Himself, and not just the prophet, who was actively guiding them toward the Promised Land. Likewise, the covered plates were a constant reminder that the words which Joseph Smith was dictating were not his own; they were being given to him by Jesus Christ (2 Nephi 27:20).

Not only do such parallels reveal the symbolic relationship between Jesus Christ and the Book of Mormon, but they also can apply to us as individuals. We, like the witnesses involved in the translation, must initially rely on the testimonies of prophets like Moses and Joseph Smith.16 Although we cannot directly see the Lord for ourselves, sacred experiences, such as partaking of the sacrament,17 allow us to indirectly feel His presence in our lives.

Eventually, some of the participants and witnesses of the translation were given full access to the plates and were privileged to “behold and view these things as they are” and even to handle the plates themselves (Doctrine and Covenants 5:13).18

Similarly, the Lord wants each of us to prepare to fully enter into His presence. In 1831, the Lord declared to His Saints, “I am in your midst and ye cannot see me; But the day soon cometh that ye shall see me, and know that I am” (Doctrine and Covenants 38:7–8). In the Lord’s due time, we too may one day see the resurrected body, and feel the marks of the wounds in the hands, feet, and side of Him whom we first only saw with an eye of faith (Doctrine and Covenants 88:68; 93:1).19

These insights—both practical and spiritual—suggest that rather than being unnecessary, the physical plates may have been essential to the translation process. The engraved characters copied from their pages helped strengthen the faith of Martin Harris and others. Their tangible reality was an ever-present reminder that Joseph’s words were derived from an actual record of ancient prophets. And their veiled presence meaningfully symbolized Jesus Christ’s full participation in the translation.

As Elder Jeffery R. Holland testified, “the reality of those plates, the substance of them if you will, and the evidence that comes to us from them in the form of the Book of Mormon is at the heart, at the very center, of the hope and testimony and conviction of this work that is unshakably within me forever.”20