Egyptian Sword. Image via Wikimedia Commons
“I did arm them with bows, and with arrows, with swords, and with cimeters, and with clubs, and with slings.”

Ancient warfare was bloody, brutal and deadly. In his account of one battle, Mormon wrote of “the heavy blows of the Nephites with their swords and their cimeters which brought death at almost every stroke” (Alma 43:37). The word cimeter is an older spelling of the word scimitar, a curved sword that usually has a cutting edge on the convex or outer side. Some skeptical readers have claimed that the term cimeter in the text is out of place since it was widely believed that the weapon was not invented until after the rise of Islam (ca. 7th century AD)—much too late to be used by the Nephites.1 Once considered a stumbling block to readers, it is now known that this weapon, in various forms, was known in both the Old World and the New in both Biblical and Book of Mormon times.

The weapon is depicted in the ancient Near East as early as 2000 B.C.2 Rare archaeological specimens of this weapon have been found sometimes with the cutting edge on the outer or convex side while others are double-edged, such as the “curved sword sharpened on two sides” discovered at Shechem, a Canaanite city, which dates to 1800 BC.3 Representations in ancient Near Eastern military art “show mostly the employment of the inner blade; that of the outer one is however also perhaps to be found. Preserved oriental scimitars have the blade outside.”4 According to Boyd Seevers, curved swords may have been the more common sword in ancient Israel.5

Thanks to the Dead Sea Scrolls, scholars now know that the Hebrew term kidon refers to a scimitar.6 In 1 Samuel 17:45, when David faced Goliath, he declared, “You come against me with a sword [hereb] and spear [hanit] and scimitar [kidon], but I come against you with the name of Yahweh Sabaoth, god of the ranks of Israel” (1 Samuel 17:45).7 Some writers have thought it strange that the Lamanite chieftain Zerahemnah would carry both a sword and a cimeter, but as Paul Hoskisson has observed, the biblical text says the same about Goliath.8

Curved sword-like weapons which can accurately be called scimitars were also an important element in ancient pre-Columbian American warfare. Ross Hassig, an authority on ancient American warfare, identified a curved weapon portrayed in Postclassic Mesoamerican art which he calls a “short sword.”9 This was a curved weapon designed for slashing and consisted of a flat hard wooden base approximately 50 centimeters (20 inches) long into which were set obsidian blades along both edges. “It was an excellent slasher and yet the forward curve of the sword retained some aspects of a crusher when used curved end forward.”10

Pre-Columbian representations show that these sometimes had a sharpened tip of wood or obsidian as well. The lightness of the short sword enabled a soldier to carry it along with other weapons. “Soldiers could now provide their own covering fire with atlatls while advancing and still engage in hand-to-hand combat with short swords once they closed with the enemy.”11 A lighter weapon such as a curved short sword would have enabled a warrior like Zerahemnah to continue to engage an enemy up close even if he lost control of his sword in battle or the blades became too chipped to be effective.12 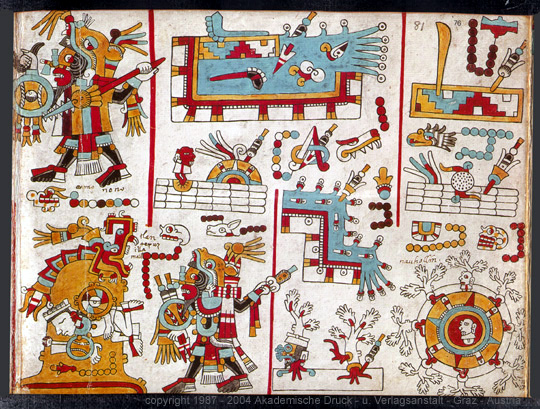 Page 81 of the Nuttal Codex

Once thought to be a Post-Classic invention (ca. AD 900–1500),13 evidence for this and other scimitar-like weapons goes back into Classic (AD 300–900), and pre-Classic times (1500 BC–AD 300).14 For example, a monument from Tonina, Mexico, which dates to AD 613 and shows a noble posing with a curved “scimitar-like flint blade.”15 Curved scimitar-like long daggers are portrayed in the hands of warriors at Teotihuacan, ca. AD 450.16

Ann Cyphers, the leading archaeologist at San Lorenzo (ca. 1500–900 BC), observed that one monument displays a weapon that “has a curved body with eleven triangular elements encrusted in the sides.”17 Another monument at the same site displays “an object in the form of a curved macana with 14 triangular points” including one on the tip.18 Thus, curved, scimitar-like weapons appear to go back to Book of Mormon times.

Once considered out of place in a record describing ancient warfare, it is now known that cimeters were a significant tool in the arsenal of ancient weaponry in both the Old World and the New. The evidence for their existence in ancient Mesoamerica during the time of the Book of Mormon is a striking confirmation of the accuracy of the Nephite account and suggests the need for patience and more careful study about other elements of the text which may at first seem strange to modern readers.

Cimeters were very effective, deadly weapons in what Mormon calls the grim “work of death” (Alma 43:37; Helaman 4:5). Mentioned first as a Lamanite weapon (Enos 1:20), this weapon was soon adopted by the Nephites (Mosiah 9:16), following a subsequent pattern of opponents quickly adopting and adapting to the clever military innovations of their adversaries. Swords, cimeters, special armor, decoy tactics, and more sophisticated fortifications, were effective elements of Nephite military strategies for a time, but eventually, they failed to protect those people when they forgot their God. Sooner or later an enemy will be smarter, stronger, or more numerous, showing the futility of trusting alone in one’s strength (Helaman 4:13) or the “arm of the flesh” (2 Nephi 4:34).

President Spencer W. Kimball once warned, “We are a warlike people, easily distracted from our assignment of preparing for the coming of the Lord. When enemies rise up, we commit vast resources to the fabrication of gods of stone and steel—ships, planes, missiles, fortifications—and depend on them for protection and deliverance. When threatened, we become anti-enemy instead of pro-kingdom of God.”19

There is wisdom in individuals being prepared for the future, natural disasters and potential physical dangers from those of ill will. Prophets ancient and modern have and will continue to counsel us how to more fully prepare and protect ourselves in a way that is consistent with the principles and covenants of the Gospel. But the Book of Mormon warns us how easily the tools of our defense can become the weapons of our rebellion (Alma 23:7). Like the righteous of old, we can ultimately only find peace and protection by following the counsel of living prophets and apostles and looking to our Savior and Heavenly Father for direction and deliverance in times of trouble.

Matthew Roper, “Mesoamerican ‘Cimeters’ in Book of Mormon Times,” Insights: The Newsletter of the Neal A. Maxwell Institute for Religious Scholarship 28, no. 1 (2008): 2.

Paul Y. Hoskisson, “Scimitars, Cimeters! We have scimilars! Do we need another cimeter?” in Warfare in the Book of Mormon, ed. Stephen D. Ricks and William B. Hamblin (Salt Lake City and Provo, UT: Deseret Book and FARMS, 1990), 352–359.