Why Do New Testament Words and Phrases Show Up in the Book of Mormon? 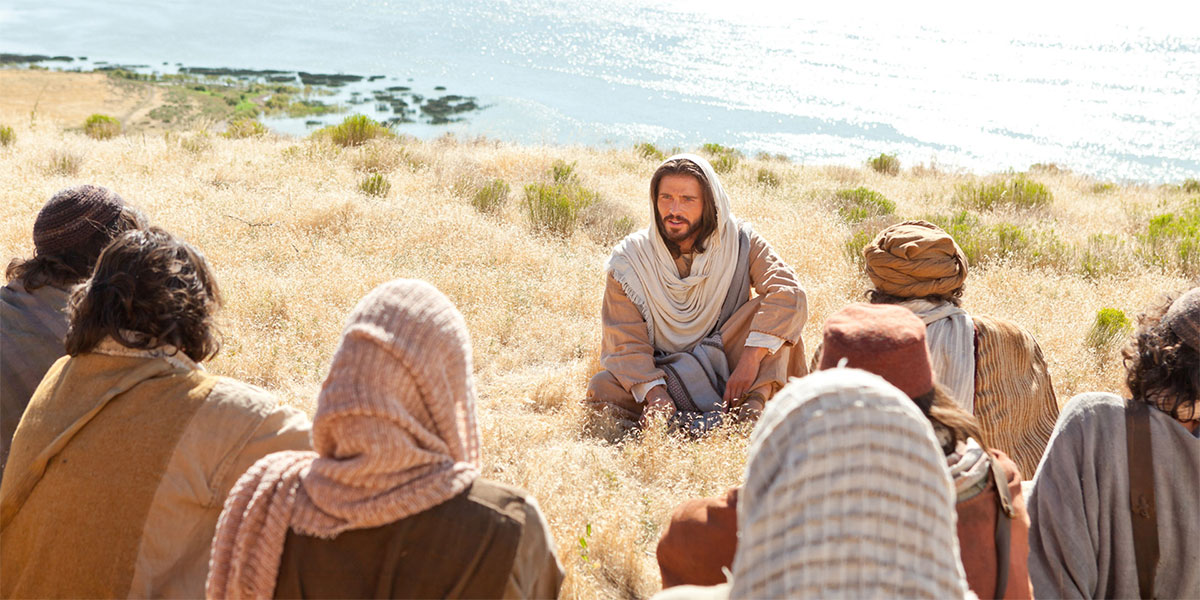 This is the first in a series of KnoWhys looking at the question of “Why Do New Testament Words and Phrases Show Up in the Book of Mormon?”

Readers of the Book of Mormon have, since it was first published, been aware of the existence of allusions to, echoes of, or quotations of biblical passages scattered throughout its text, including material from both the Old Testament and the New Testament. The appearance of some language from the Old Testament is readily understood and accepted in light of the fact that Lehi and his family left Jerusalem in Old Testament times and carried with them scriptures (on the plates of brass) that constituted a large part of what we now call the Old Testament (1 Nephi 5:10–13).

However, in addition to the more obvious biblical writings that could have been present on the plates of brass, there is also a considerable amount of language in the Book of Mormon that would seem to have originated after the time when Lehi left Jerusalem, both from the Old Testament and also the New Testament. Much of this New Testament material appears in the book of 3 Nephi, where the resurrected Christ made a personal visit to the Book of Mormon peoples and shared many of the same teachings with them that He had previously taught during His mortal ministry in Galilee and Judea.1

How does one account for phrases like, for example, “repent ye, repent ye, for the kingdom of heaven is at hand” found in Matthew 3:2, which shows up four times, in various forms, in the Book of Mormon?3 The appearance of biblical phrases, many of which match the language of the King James Bible, has led to the misleading and oft-repeated criticism that Joseph Smith must have mechanically and intentionally plagiarized large portions of the Bible when dictating the Book of Mormon.

Although we do not know the exact reasons for sure, several explanations are possible for the extensive amount of biblical quotations and phrasing in the text. What explanation might best fit a given situation depends on many complex factors, including the authorship, date, and nature of the Book of Mormon text in which the biblical wording occurs.

The following points represent several of the possible reasons (beyond the fact that much of the Old Testament was likely available on the plates of brass) for why biblical phrases and passages may appear in the Book of Mormon.

A. The resurrected Jesus as the source of some of these similarities: 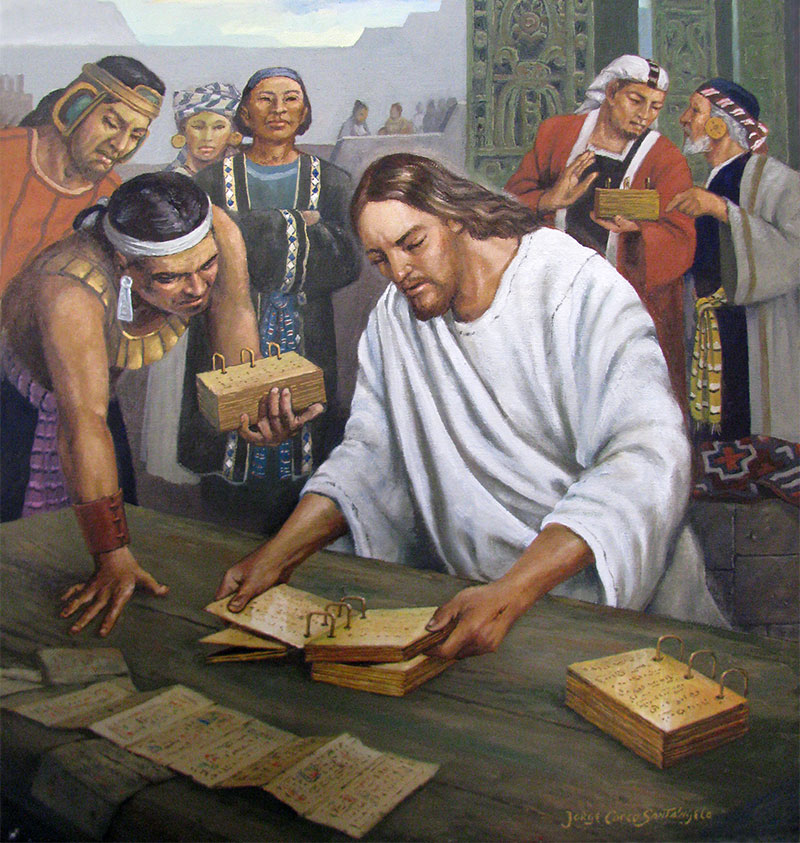 1. Jesus Christ’s teachings during His personal ministry among the Nephites can account for a substantial portion of the biblical quotations and phrases in the text. For example, it makes sense that Jesus would repeat, with some variation, His teachings from the Sermon on the Mount in the New Testament to the Nephites at the temple in Bountiful.4 Christ’s delivery of this sermon among the Nephites might also explain quotations from or allusions to the Sermon on the Mount found later on in the writings of Mormon and Moroni (for example, Matthew 5:22/3 Nephi 12:22 in Mormon 8:17).

2. The presence of Old Testament texts like Isaiah 54 and Malachi 3–4 (found in 3 Nephi 22 and 24–25) are also not hard to explain because they were quoted to the Nephites by Jesus Himself. As Christ explained, “These scriptures, which ye had not with you, the Father commanded that I should give unto you; for it was wisdom in him that they should be given unto future generations” (3 Nephi 26:2).

3. Even after His initial visitation among the Nephites, Jesus continued to meet with and talk to His disciples in the New World (see 3 Nephi 26:13). It is likely that, similar to the Sermon on the Mount, Jesus delivered other teachings to them that He had taught during His ministry among the Jews in the Old World. In fact, Mormon said he could not record “even a hundredth part of the things which Jesus did truly teach unto the people” (3 Nephi 26:6). In addition, it should be remembered that Jesus later revealed things directly to Mormon and Moroni.5 It is thus quite possible that many of Christ’s teachings found in the New Testament were also had among the Nephites, or were delivered directly to Mormon or Moroni, but simply were not recorded in Mormon’s account of Christ’s ministry.

B. Similarities Due to a Common Ancient Source: 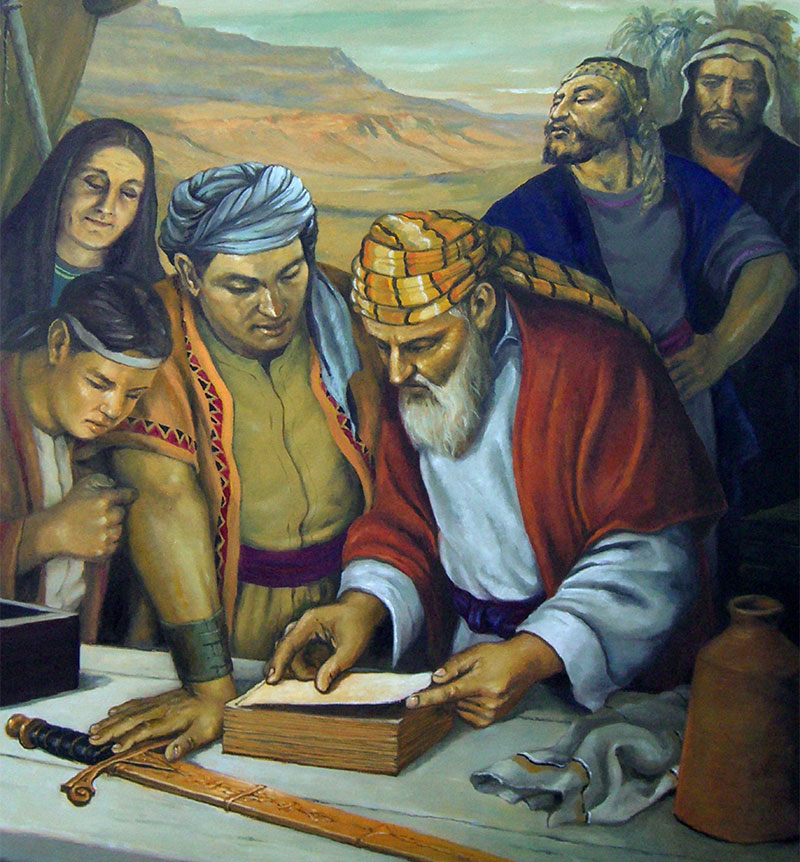 1. Far more often than readers usually realize, many New Testament passages are quoting or paraphrasing earlier Old Testament or other ancient texts (such as a version of the Book of Enoch) that could have been available to the Nephites through the plates of brass (for example, Mosiah 16:7–8 and 1 Corinthians 15:54–56 relate to Isaiah 25:8 and Hosea 13:14).6

2. Some passages in the Book of Mormon have similarities to New Testament passages that themselves are quotations of or allusions to Old Testament texts that post-date Lehi’s depature from Jerusalem, making them presumably unavailable to the Nephites. It is possible, however, that these Old Testament expressions could derive from a phase of Hebrew language and literature that dates to before Lehi left Jerusalem. This scenario would make them potentially available to have been included on the brass plates or otherwise passed on to Book of Mormon peoples.7

C. Revelations to Nephite prophets as the source of the similarity: 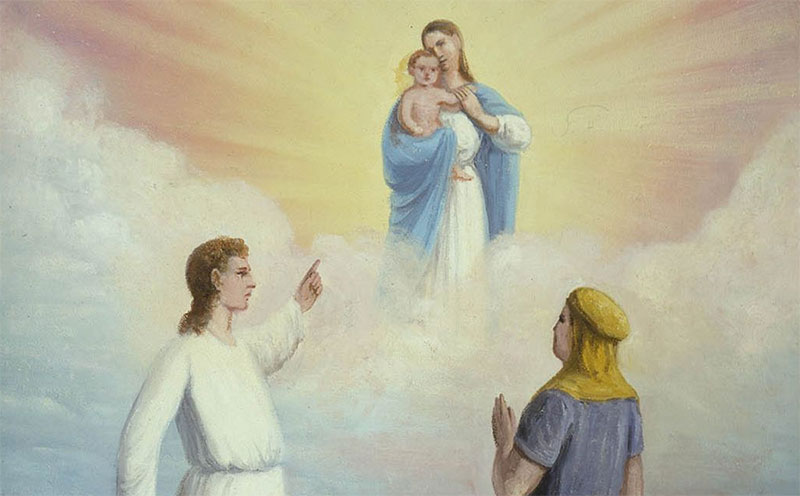 "Nephi's Vision of the Virgin and the Son of God" by C. C. A. Christensen

1. Before the appearance of Jesus in the New World, Jesus (or his Angel) spoke to Nephi, Jacob, Abinadi, Benjamin, Alma, and others, and they learned New Testament-type phrases directly from Him in these revelations. For example, Nephi was shown a vision of the last days that he was told would later be recorded by an apostle of the Lamb named John (see 1 Nephi 14:18–27). It was even revealed to Nephi that others had received the same or similar vision of “all things” that Nephi had received (v. 26).8

2. Revelations that were given in other ways to Nephite prophets could also have revealed doctrines and principles that would subsequently be taught or revealed in New Testament Christianity (see Alma 32:38 and Matthew 13:6).

D. Mormon and Moroni as the source of the similarity: 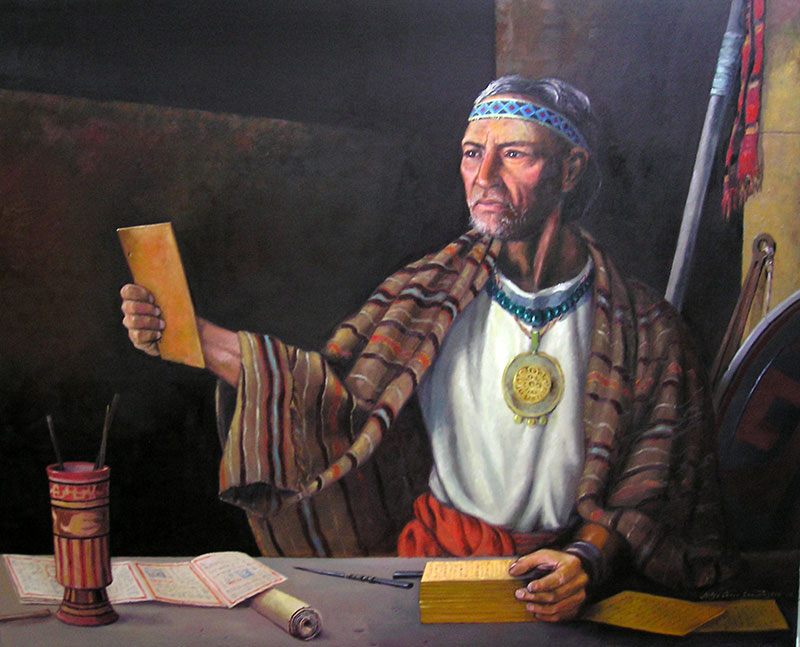 1. As Mormon in the 4th-century AD abridged the historical Nephite records, he could have inserted words or phrases that Jesus had introduced into Nephite usage (as discussed above). Since the Nephite language or dialect changed over the centuries to such an extent that readers in Mormon’s day could not understand some of the earlier language, one may assume that, on occasion, Mormon may have avoided literal copying and used instead expressions more familiar to his contemporaries (and more similar to New Testament language) so that his readers could better understand (see Matthew 6:25/3 Nephi 13:25 and Alma 31:37).

2. Hypothetically, it is possible that Mormon did not simply append the Small Plates of Nephi to the end of his Plates,9 but instead copied the words of Nephi, Jacob, and others from the Small Plates onto new plates that he created. We do not know if this was the case, but if it was, Mormon could have used later (New Testament-type) phrases from his day to make the early Nephite teachings more understandable for a future audience that he knew would have the Bible (see Mark 9:31/2 Nephi 25:13; Matthew 9:22/Enos 1:8; John 10:16/1 Nephi 22:25).

3. Some sections in the book of Ether were written by Moroni in the late 4th-century AD as his own editorial insertions, so it should not be unexpected to find “Christian” language in these sections (Matthew 25:28/Ether 12:35). It is also possible that Moroni inserted Christian language into other portions of Jaredite history as he summarized, contextualized, and interpreted its narratives.

E. The translation process as the source of the similarity: 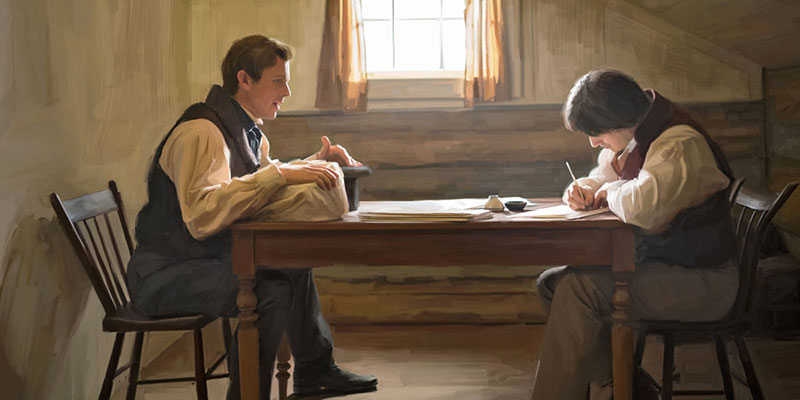 Joseph Smith translating the Book of Mormon via lds.org

1. Joseph Smith’s ordinary language likely included some biblical expressions that were common in the early 1800s. Under the theory that he was responsible to express the ideas on the plates using his own words and phrases, it is possible that some of the biblical phrases could have appeared in the translation without his thinking about (maybe not even being aware of) where they appeared in the New Testament (as perhaps Galatians 5:1/Mosiah 23:13; Ephesians 6:4/Enos 1:1; Philippians 2:12/Mormon 9:27).

2. Joseph Smith may have memorized or learned by heart some common New Testament passages which the Spirit then called up from his mind as they were then woven into the translation because they made good translational sense appropriate in that context.

3. The idea that Joseph Smith opened a Bible, located, and read from the Bible as he went along seems completely unlikely, for several reasons: (1) There is no evidence that he had his own Bible before the end of 1829; (2) eye-witnesses, such as Emma, said that he used no books, notes, or Bible in dictating the English words of the Book of Mormon; (3) no witness or close associate involved in any way in the coming forth of the Book of Mormon ever claimed that Joseph had or used a Bible; (4) no hostile observers ever report or suggest that Joseph had a Bible while translating; (5) if Joseph were using a King James Bible, he would have to have done extensive study and alteration of the text before dictating, due to the complex composite quotations, blending of texts, and sometimes extensive but precise modifications made to the quoted biblical texts.10

4. Various lines of scriptural, linguistic, and historical evidence suggest that Joseph Smith was not responsible for the English language of the translation, and that it was instead revealed to him word for word.11 In this scenario, it is possible that whatever divine process was responsible for producing the English translation was also responsible for extensively integrating relevant New Testament phrasing into the text. This “revealed words” approach accounts well for the fact that not only are there short phrases from the New Testament found in the Book of Mormon but also long verbatim quotes. The complexity of how these longer quotes are sometimes woven in and adapted to the Book of Mormon narrative makes the idea that they were coming from Joseph Smith’s memory seem inadequate. Keeping in mind that Joseph Smith was most likely not using a Bible during the translation (as discussed above), the presence and nature of these biblical quotations can be seen to support this theory.

In sum, there may be many reasons why biblical words and phrases show up in the Book of Mormon. The text of the Book of Mormon, and its relationship to the Bible and to other ancient scriptural texts, is complex in many ways. Although we do not know for sure which of the above explanations, or combination of explanations, stands behind each of the many Old and New Testament phrases and expressions found in the Book of Mormon, it seems clear that several logically plausible sources may stand behind the writing and translation of its various passages.

Above all, it is important to remember that although the Book of Mormon was written by ancient prophets, it was meant to be read by people in our time – people who often know the Bible, especially the New Testament, well and are accustomed to recognizing KJV literary styles as holy scripture. As such, finding biblical language in the Book of Mormon may very well be a fulfillment of the ancient prophet Nephi’s inspired words when he taught that God “speaketh unto men according to their language, unto their understanding” (2 Nephi 31:3; D&C 1:24).

This KnoWhy was made possible by the generous donation of the Keller Family Trust.