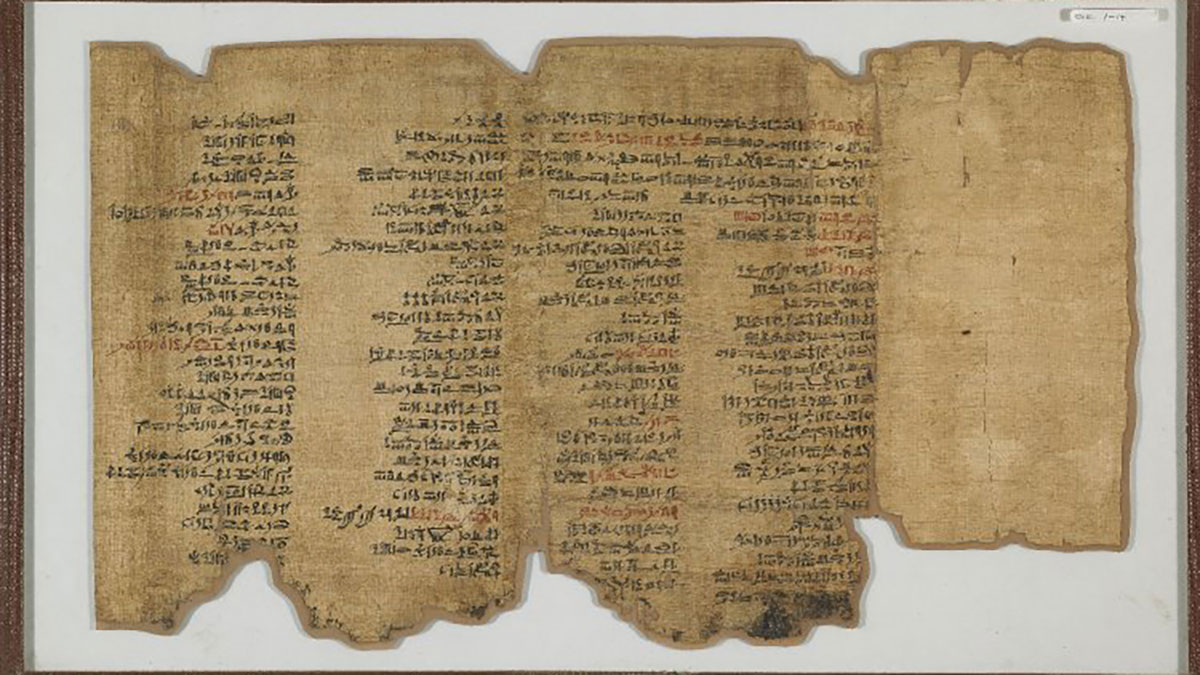 The Bremner-Rhind Papyrus (305 BC) via The British Museum
“And I know that the record which I make is true; and I make it with mine own hand; and I make it according to my knowledge.”

Beginning with the pioneering work of Hugh Nibley,1 scholars have noticed that the Book of Mormon contains what are called colophons (from the Greek word kolofōn, meaning “summit,” “top,” or “finishing”). “In antiquity,” one scholar explained, “the beginning and/or the end of a literary text was often marked by colophons. The colophons as superscriptions and subscriptions contained various information about the published text (addressee, author, scribe, subject, chronological information, etc.).”2 Nephi’s introductory colophon is arguably the most notable example of its use in the Book of Mormon. After summarizing the contents of his record and identifying himself as both scribe and author of the text, Nephi began his account by affirming: (1) his good parentage and upbringing, (2) his education and scribal training, and (3) his reliability as an author (1 Nephi 1:1–3).

But Nephi was not the only Book of Mormon author to use colophons. Enos (Enos 1:1–2) and Mormon (Mormon 1:1) both begin their accounts with a colophon, while Jacob (Jacob 7:27) included a colophon at the conclusion of his record. Mormon also used colophons throughout his abridgement in order to introduce verbatim or near-verbatim quotations of various source texts.

Alma 5, for example, is prefaced with this introductory colophon: “The words which Alma, the High Priest according to the holy order of God, delivered to the people in their cities and villages throughout the land.” Likewise, Samuel the Lamanite’s prophecies to the Nephites recorded in Helaman 7–16 are introduced with a simple colophon identifying the author behind the text (Samuel) and a short summary of its contents.3

The use of colophons to signal the beginning or end of a text is widely found in biblical, Egyptian, and Mesopotamian sources. The prophetic books of the Bible often begin with colophons which identify the prophet and briefly introduce the historical setting in which he was prophesying. For instance, the book of Isaiah begins: “The vision of Isaiah the son of Amoz, which he saw concerning Judah and Jerusalem in the days of Uzziah, Jotham, Ahaz, and Hezekiah, kings of Judah” (Isaiah 1:1).4

Sometimes biblical colophons describe the prophecies as coming literally “by the hand” (bĕ yad) of the prophet (cf. Malachi 1:1; Haggai 1:1), a feature shared in Mesopotamian texts to identify the copyist (“by the hand of so-and-so”) and in later Egyptian texts to indicate authorship (“written by his own hand”; cf. 1 Nephi 1:3).5

As Nibley recognized, Nephi’s colophon at the beginning of his account shares striking similarities to the colophon found in an ancient Egyptian manuscript called the Bremner-Rhind Papyrus.6 Further similarities with Egyptian texts could be cited. Indeed, Egyptian literary texts very often end in either a short, formulaic colophon certifying that the text has been copied correctly or a longer colophon which also includes the identity of the scribe.7 Introductory prefaces to Egyptian literary texts likewise often include the name and titles of the writer or subject of the narrative.8 These and other considerations led Nibley to conclude that the type of colophon seen in 1 Nephi 1:1–3 is “highly characteristic of Egyptian compositions.”9

Nephi said he wrote his record “in the language of [his] father, which consists of the learning of the Jews and the language of the Egyptians” (1 Nephi 1:2). This being the case, it is reasonable to expect that his writings should bear the marks of an ancient Judeo-Egyptian literary culture. Nephi’s use of colophons fulfills this expectation remarkably well. Inasmuch as there is clear evidence (unavailable in Joseph Smith’s day) for Egyptian influence on Jewish literary and scribal culture before and during Nephi’s time,10 this in turn reinforces the book’s historicity.

Besides this, learning to recognize colophons may assist readers in making sense of the Book of Mormon’s complex narratives. This is because colophons were used at strategic points in the text to help readers identify when certain sources are being cited, or when authorial voices are shifting from one to another (such as Mormon’s to Alma’s in Alma 5). As explained by LDS scholar John A. Tvedtnes, colophons “provide valuable clues to the process of writing and compiling the [Book of Mormon].”11

The presence of colophons in the Book of Mormon forcefully testifies of the “great efforts made by its writers and editors to make the record as clear as possible.”12 As one whose soul “delight[ed] in plainness” (2 Nephi 25:4), it’s completely understandable, then, why Nephi would use colophons in his record, and why his prophetic and scribal descendants would follow suit.

Hugh Nibley, Lehi in the Desert/The World of the Jaredites/There Were Jaredites (Salt Lake City and Provo, UT: Deseret Book and FARMS, 1988), 17–19.

John A. Tvedtnes, “Colophons in the Book of Mormon,” in Rediscovering the Book of Mormon: Insights You May Have Missed Before, ed. John L. Sorenson and Melvin J. Thorne (Salt Lake City and Provo, UT: Deseret Book and FARMS, 1991), 32–37.