Why are There So Many War Chapters in the Book of Mormon?

The Battle at the Sidon River, James Fullmer.
“And it came to pass that the Lamanites . . . were exceedingly astonished at their manner of preparation for war.”

The Book of Mormon is a book saturated with warfare. The grim reality for ancient peoples was that religious, political, and cultural ideologies were frequently enforced through war. Even before bloodshed broke out between the Nephites and Lamanites in the New World, Lehi’s party was exposed to a violent rivalry between Nephi and his brothers, Laman and Lemuel.

John W. Welch has identified at least 15 major wars or conflicts that spanned the history of Book of Mormon peoples (see chart below).1 A fair portion of the book of Alma (Alma 2–3, 16, 24–25, 43–62) sometimes provides excruciating details concerning the wars between the Lamanites and Nephites. Unforgettable is the tragic downfall of the Nephites at the battle of Cumorah, which resulted in unparalleled death and carnage (Mormon 1–6).

As is true today, warfare in the ancient world took on ideological importance for both sides of a conflict. The ancient Egyptians, Hebrews, Greeks, and Romans all recorded or recounted tales of combat and war that took on nationalistic and mythic significance for them as a people.2 “Scribes often recorded the results of these wars in accounts usually intended to exalt the king and/or the nation’s god(s),” Boyd Seevers observed. “The biblical authors normally write about warfare for some theological purpose, such as illustrating faith–––or lack thereof–––in God by some Israelite leader or the nation as a whole.”3 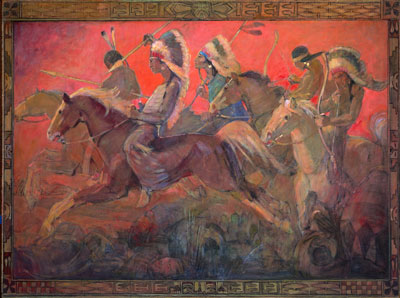 The same is true of the ancient Maya. Archaeological investigations have determined conclusively that the Maya, Aztec, and other Mesoamerican cultures were often steeped in warfare that carried great cultural and practical significance.4 Warfare “occupied a prominent place in the mind and practice” of ancient Mesoamerican peoples. Just as it did for the Nephites, “warfare, whether real or imagined, played an important role in shaping values, meanings, and identities in the lives of the Maya, and such cultural notions, in turn, affected how war was fought or avoided.”5

This was precisely Mormon’s intention in capturing the history of Nephite warfare. Much more than simply reporting these wars like a modern journalist–––unbiased, impartial, and striving to remain morally neutral–––Mormon infused (sometimes stereotypical) moral and theological significance into his war narratives.6 Thus Mormon’s lament at the end of his records that his people were slaughtered because of their having “departed from the ways of the Lord” (Mormon 6:17). Or his forceful denunciation of Amalickiah, the Nephites’ chief enemy some centuries before Mormon’s time, as a wicked usurper, conspirator, apostate, and traitor who “by his fraud, gained the hearts of the people” (Alma 47:30).

Mormon’s focus on Nephite troop tactics, weaponry, fortifications, and the like might also easily be explained by the simple fact that Mormon himself was a military leader as much as a historian or prophet. With a professional interest in military matters, it makes sense that Mormon would knowledgeably spend time to describe the finer details of Nephite military history. Especially when these details augmented his narrative, such as when Nephite innovations in armor and fortifications granted them victory over their Lamanite foes (e.g. Alma 44:8–9; 50:10–12).7

When viewed in an ancient context, it begins to make sense why the Book of Mormon would focus so closely on war. As explained by Welch,

Wars and the politics of war were an integral part of history in the Book of Mormon. . . . Most military events in the Book of Mormon have both religious and political importance. The Nephites did not dichotomize their world between church and state as we do. Ancient peoples generally viewed war as a contest between the gods of one people and the gods of another.8 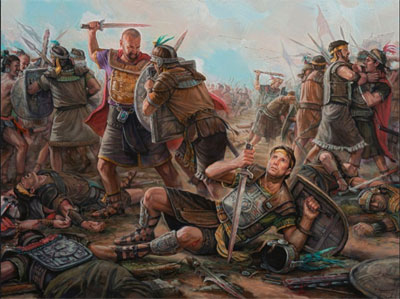 These factors combine to make the war chapters in the Book of Mormon powerful for a number of reasons. They not only provide important information on the history of the Nephites and Lamanites, but also give modern readers to a window into Mormon’s thinking on how and why he presented the history of his people the way he did.

War tactics and atrocities, whether conventional or terrorist, continue to plague the world today. The causes of war and armed conflict, the sources of contention and violence, still preoccupy and perplex the minds and hearts of nations everywhere. While Mormon and his peoples proved unable to stave off the horrors of their own annihilation, their record was written as a witness and a warning to help people today all over the world learn wisdom. Its prophetic teachings—of faith in Christ, sincere repentance, obedience to righteous covenants, generous love for all mankind, and concern for children and future generations—offer messages of hope, peace, and eternal rest in the presence of God. Though ancient, the messages of the Book of Mormon could not be more relevant to the urgent needs of modern world today.

R. Douglas Phillips, “Why is So Much of the Book of Mormon Given Over to Military Accounts?” in Warfare in the Book of Mormon, ed. Stephen D. Ricks and William J. Hamblin (Salt Lake City and Provo, UT: Deseret Book and FARMS, 1990), 25–28.