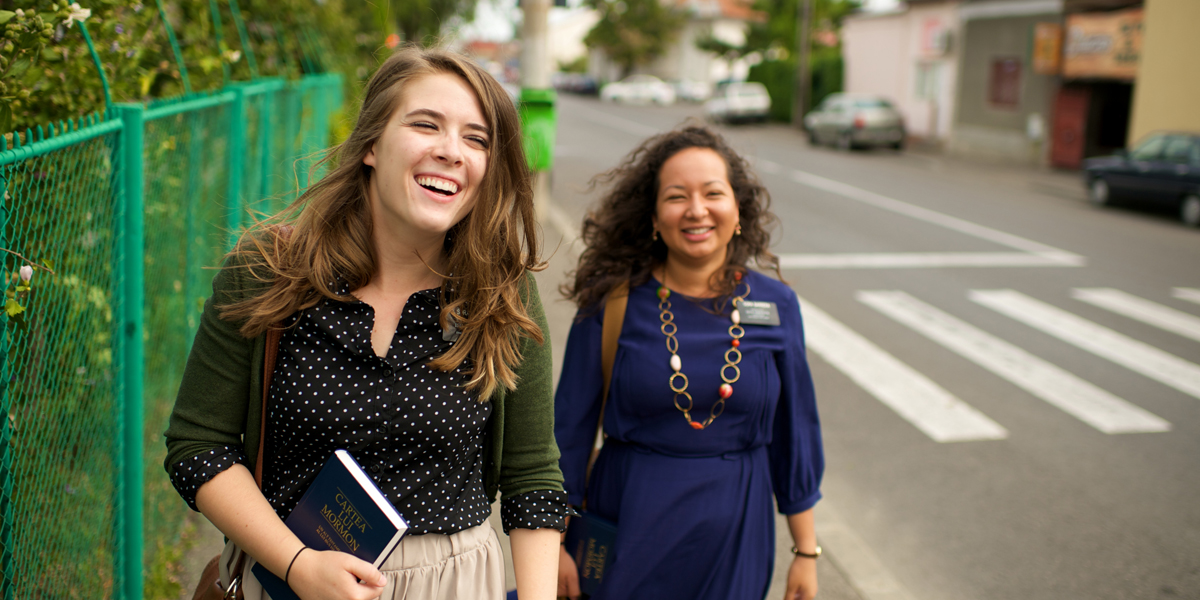 Romania Sister Missionaries via lds.org
"For after the book of which I have spoken shall come forth, and be written unto the Gentiles, … there shall be many which shall believe the words which are written."

In June 1830, Joseph Smith set apart his younger brother, Samuel, as the “Church’s first officially called missionary.”1 As a teenager, Samuel had gathered with his family to hear Joseph’s stories about the gold plates and the angel Moroni.2 He later became one of the Eight Witnesses to the Book of Mormon and was privileged to see the plates and heft them for himself (see Testimony of Eight Witnesses).

With this background in mind, it’s not surprising that Samuel’s testimony and distribution of the Book of Mormon played a key role in his success as a missionary.3 Although Samuel “baptized no one and shared only a few copies of the Book of Mormon,” those few copies led to the conversions of future Church leaders, such as Brigham Young and Heber C. Kimball. In turn, these men were instrumental in the conversion of thousands.4

What was it about the Book of Mormon that so moved these early converts? Parley P. Pratt, one of the original twelve apostles in this dispensation, recalled, “As I read, the spirit of the Lord was upon me, and I knew and comprehended that the book was true, as plainly and manifestly as a man comprehends and knows that he exists.”5 Ezra Thayer, who was at first quite skeptical toward the book, remembered that when he first opened its pages he received “a shock with such exquisite joy that no pen can write and no tongue can express.”6

Many other early converts expressed similar sentiments.7 For them, the book conveyed the Spirit of the Lord and acted as a sign of Joseph Smith’s prophetic calling. As Casey P. Griffiths has explained, “It is not an overstatement to say that for the early Saints the coming forth of the book transcended theology; its existence was a testimony of the existence of God and proof of new revelation in modern times.”8

Yet the Book of Mormon had more to offer than many early Church members realized. In 1832, Joseph Smith received Doctrine and Covenants 84, which declared that the members of the Church would remain under condemnation until they repented and “remember[ed] the new covenant, even the Book of Mormon … to do according to that which I have written” (v. 57). Implied in this divine rebuke is the truth that the content of the Book of Mormon is foundationally important to the Church in several ways.9

In the twentieth century, Church leaders steadily increased their focus and emphasis on the Book of Mormon in the realms of Church education, spiritual edification, and missionary work.10 However, it was largely through the inspired teachings of President Ezra Taft Benson that the book has achieved the level of priority that it currently holds among Latter-day Saints. According to Griffiths, through President Benson’s efforts, “the Book of Mormon reemerged as the primary tool for conversion.”11 This effort has been continued by President Benson’s prophetic successors,12 and today the Book of Mormon plays an unprecedented role in bringing people unto Christ and His restored Church.

Understanding this historical backdrop can help today’s readers better appreciate and utilize the Book of Mormon as a missionary tool. Preach My Gospel, the Church’s official manual pertaining to missionary work, states that an “essential part of conversion is receiving a witness from the Holy Ghost that the Book of Mormon is true.”13 It further declares that the “Book of Mormon, combined with the Spirit, is [the] most powerful resource in conversion” and that it should be the “main source for teaching the restored gospel.”14

Although its miraculous translation is an important sign of the Restoration, the Book of Mormon itself contains a wealth of information regarding missionary work.15 It outlines inspired patterns of missionary service,16 it shows how missionaries should prepare for their service,17 and it depicts divinely called messengers effectively testifying in companionships.18 Its inspired messages help Latter-day Saints know what to teach, how to teach, and why they should teach the gospel of Jesus Christ.19 Moreover, it adds narrative contexts, powerful righteous examples,20 and additional truths to the missionary mandates found in the Doctrine and Covenants.21

This statement should resonate stronger today than ever before, for the resources to share this sacred volume are now almost unlimited.23 For many readers, the entire text of the Book of Mormon can easily fit on the electronic device in their pocket. It can travel with them wherever they go, and they can promote its sacred truths through a growing number of social media applications.24

When Samuel Smith started out on his mission, there was no missionary training center to teach him, no mission president to direct him, and no senior companion to tutor him. All he had, as “he walked alone into towns near Palmyra, New York,” was a “knapsack full of copies of the recently printed Book of Mormon.”25 Yet, the converting power of only a few shared copies of the Book of Mormon led thousands to the restored gospel of Jesus Christ.

In light of the ever-increasing capacity to share this life-changing scripture with the world, President Benson declared, “If the early Saints were rebuked for treating the Book of Mormon lightly, are we under any less condemnation if we do the same?”26 In another address he taught that “God will hold us accountable if we do not now move the Book of Mormon in a monumental way.”27 Considering the great missionary responsibility that attends a testimony of the Book of Mormon, it is imperative “that each of us … take full advantage of [its transformative] power.”28

Casey Paul Griffiths, “The Book of Mormon among the Saints: Evolving Use of the Keystone Scripture,” in The Coming Forth of the Book of Mormon: A Marvelous Work and a Wonder, ed. Dennis L. Largey, Andrew H. Hedges, John Hilton III, and Kerry Hull (Salt Lake City and Provo, UT: Deseret Book and Religious Studies Center, Brigham Young University, 2015), 199–226.

Ezra Taft Benson, “Flooding the Earth with the Book of Mormon,” Ensign, November 1988, online at lds.org.