Book of Mormon Central / KnoWhys
What Do We Know About the “Anthon Transcript”? 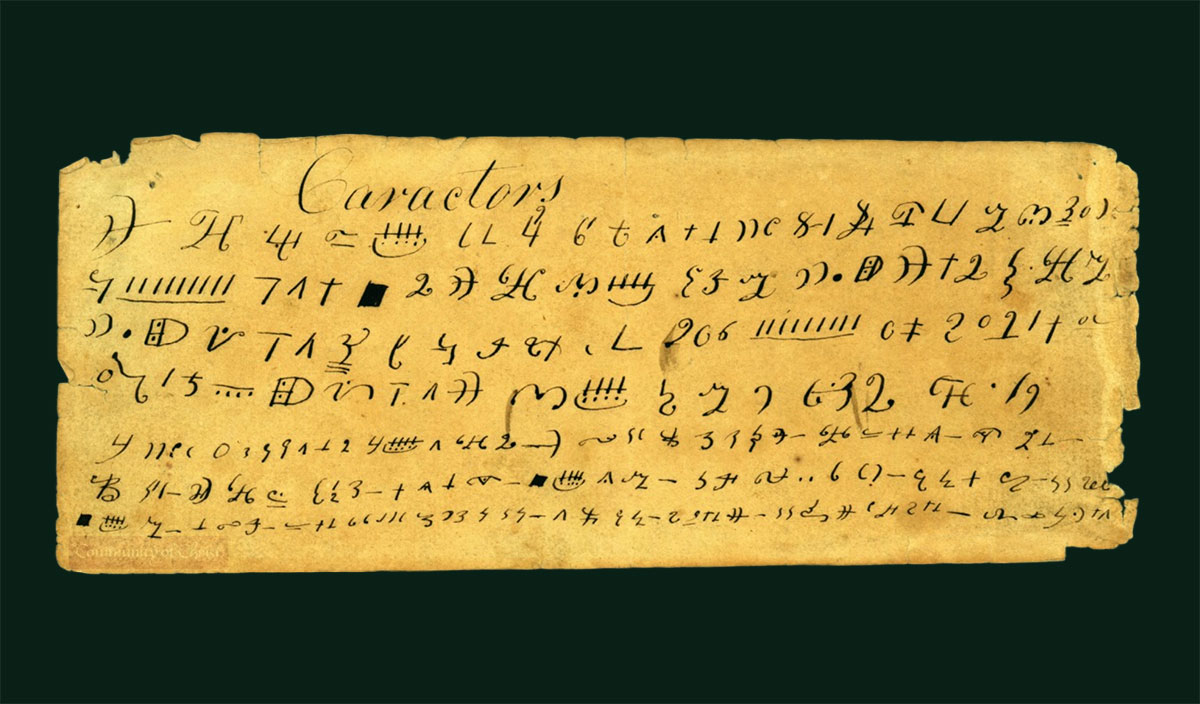 “Caracters Document” via the Community of Christ
“Knowest thou of any one that can translate? For I am desirous that these records should be translated into our language.”

One of the most important sources related to Martin Harris’s visit and consultation with scholars Samuel Mitchill and Charles Anthon is a small piece of paper known today as the “Caractors” Document (also known as “Anthon Transcript”).1

This document was created most likely sometime between the years 1829–1831 by John Whitmer, who was one of the Eight Witnesses of the Book of Mormon and who was called by revelation to be an early historian and recorder of the Church of Christ (Doctrine and Covenants 47).2 The transcript is filled with characters that are believed to have been taken from the Book of Mormon plates and shown to Mitchill and Anthon by Harris for their examination in the winter of 1828.3

While the document itself is not the original text examined by Mitchill and Anthon, it does appear to be an early copy of the now-lost original prepared by Joseph Smith.4 At some point the document fell into the possession of David Whitmer and has remained in the archives of the Community of Christ (formerly the Reorganized Church of Jesus Christ of Latter Day Saints) in Independence, Missouri.

A description of the characters shown to Mitchill and Anthon by Martin Harris come from several sources (though unfortunately none from Mitchill himself).5 In his 1838 history, Joseph Smith quoted Harris quoting Anthon as determining that the characters were “Egyptian, Chaldaic, Assyriac, and Arabic” (JS–History 1:64).6 In a letter to Eber D. Howe, dated January 15, 1831, W. W. Phelps portrayed Anthon as describing the characters as “ancient shorthand Egyptian.”7 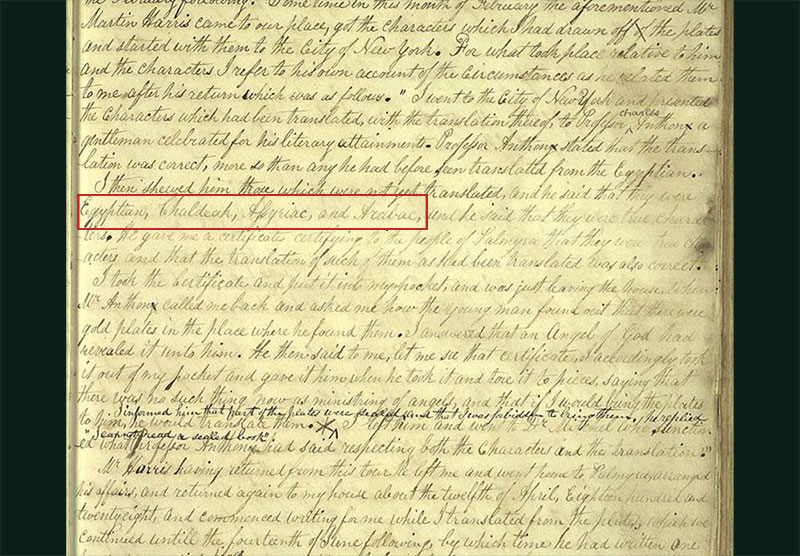 Charles Anthon’s quoted description of the caractors document from the Joseph Smith Papers.

Anthon himself left behind three accounts of his visit with Harris. In the earliest account published in 1834, Anthon described what he saw as “Greek and Hebrew letters, crosses and flourishes, Roman letters inverted or placed sideways . . . arranged in perpendicular columns, and the whole ended in a rude delineation of a circle divided into various compartments, decked with various strange marks, and evidently copied after [a] Mexican Calender.”8

A few years later in 1841 Anthon remembered that “the characters were arranged in columns, like the Chinese mode of writing, and presented the most singular medley that I ever beheld. Greek, Hebrew, and all sorts of letters, more or less distorted, either through unskillfulness, or from actual design, were intermingled with sundry delineations of half moons, stars, and other natural objects, and the whole ended in a rude representation of the Mexican zodiac.”9 A final account left by Anthon in 1844 similarly spoke of the document he was shown “contain[ing] in one or two parallel columns rude imitations of Hebrew and Greek characters together with various delineations of sun, moon, stars, &c.”10

Because “Anthon’s description varies significantly from the surviving fragment of characters,” it is difficult to reconstruct what exactly was represented on the original document prepared by Joseph Smith.11 For example, Anthon spoke of the writing he saw arranged in columns, whereas the “Caractors” document is arranged in rows. Anthon likewise spoke of seeing a “Mexican zodiac” on the text he examined, something absent from the “Caractors” document. Precisely what characters were originally prepared by Joseph and examined by Anthon is therefore not entirely clear.12

Besides the “Caractors” document, “other documents bearing Book of Mormon characters circulated within the early Church as well.”13 This includes copies of characters created and circulated in a Church-affiliated newspaper in New York and by early Latter-day Saint figures such as Oliver Cowdery and Frederick G. Williams.14 However, of “the known extant documents reportedly containing characters from the gold plates, none actually fit the description of the document taken to Anthon,” including the texts prepared by Cowdery and Williams.15 This makes it difficult to know how accurately the characters circulated by these later sources preserved those originally prepared by Joseph Smith.

Scholars have debated whether the characters on the surviving “Caractors” document are authentic. While skeptics of Joseph Smith, beginning with Anthon himself, have largely dismissed the characters as either fabricated or copied from sources available to Joseph, Latter-day Saint scholars have argued for their resemblance to ancient Egyptian scripts, as well as scripts from ancient Mesoamerica.16 A few non-Latter-day Saint Egyptologists have also weighed in, with some having denied any resemblance to ancient Egyptian,17 and others having affirmed such.18 At this point no consensus has been reached as to what script (ancient or modern) the characters of the Anthon transcript closest resemble or should otherwise be compared to.19 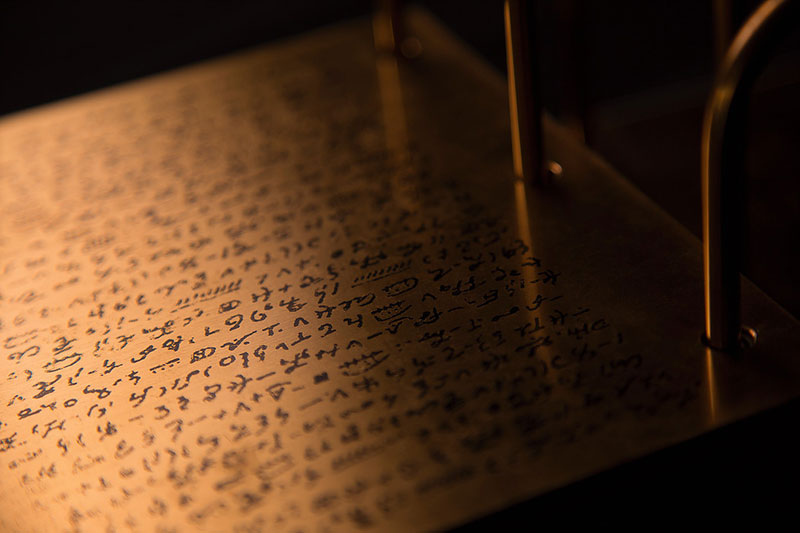 Many questions remain about the Anthon Transcript. Given the contradictory accounts left behind by Charles Anthon and Martin Harris,22 the absence of a translation of the characters which finds broad academic acceptance, and the fact that the documents which survive today are copies (or even copies of copies) of a presumably now-lost original, students of the Book of Mormon and early Latter-day Saint history should be cautious in how they evaluate the surviving evidence.

If modern scholars today are unable to agree with each other over what kind of script the “Caractors” document contains or how to translate the text, as Moroni anticipated would be the case (Mormon 9:32–34), then it seems unlikely that Anthon–––with the limited knowledge of Egyptian available to him in the early nineteenth century–––would have fared much better beyond being able to offer general remarks about the characters (such as their resemblance to other ancient scripts).

This applies even more for Joseph Smith. On his own with what limited education he had, Joseph would have been completely unable to translate the record without divine aid.23 While the Prophet may have initially sought the assistance of scholars in making sense of the characters on the plates, the result of Harris’s meeting with Anthon made it clear that Joseph himself would ultimately have to be responsible for the translation. The circumstances surrounding the creation of the Anthon Transcript therefore offer insight into the process behind the translation of the Book of Mormon.24

When uncertainties such as those surrounding the Anthon Transcript persist, readers can take the opportunity to faithfully apply the counsel given by the Lord in the Doctrine and Covenants to “study [the matter] out in [their] mind” (Doctrine and Covenants 9:8) and to “seek learning, even by study and also by faith” (Doctrine and Covenants 88:118). Future discoveries or more penetrating scholarly analysis of the available evidence might one day solve the mystery of the Anthon Transcript. Until that time, the Book of Mormon itself is available for all to read and gain a testimony of by the power of the Holy Ghost (Moroni 10:4–5).

This KnoWhy was made possible by the generous contribution of the Stephanie Sorensen Charitable Fund.