What Can We All Learn about Repentance from the Tragic Loss of the 116 Book of Mormon Pages? 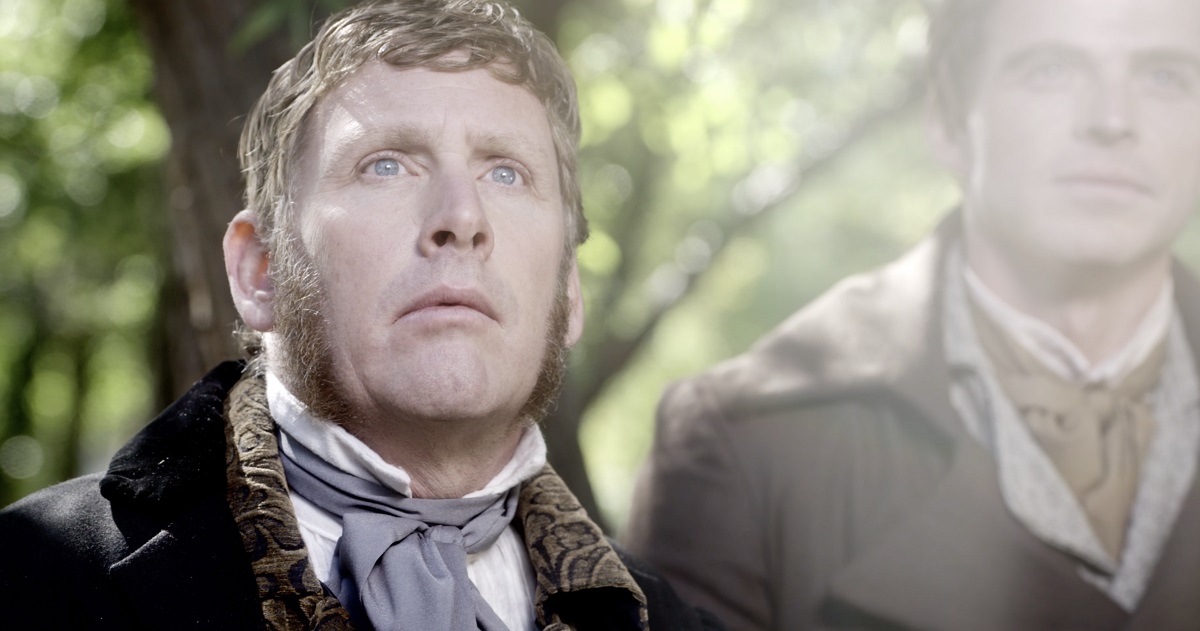 Still Image from "A Day for the Eternities" via LDS Media Library
“Blessed are they who will repent and hearken unto the voice of the Lord their God; for these are they that shall be saved”

The first work on the Book of Mormon’s translation took place in Harmony, Pennsylvania in the spring of 1828. During that time, Joseph Smith’s primary scribes were his wife Emma Smith and his close friend Martin Harris.1 Martin, at the insistence of his skeptical wife Lucy and out of a well-meaning desire to convince others of the truthfulness of the work, badgered Joseph with requests to allow him to show the translation manuscript (generally thought to have totaled 116 pages) to Lucy and other close friends.2

Joseph resisted and asked the Lord for direction, who replied by forbidding Joseph from allowing the manuscript to leave his custody.3 After Joseph’s third request, the Lord finally allowed the 22-year-old seer to give Martin permission to take the manuscript, but commanded that he show them to only four specific people. Joseph later recalled that covenantal language was specifically invoked between Martin and the Lord on this occasion.4 Martin left Harmony and returned to his home in Palmyra, New York.

After some time, with no word from Martin, Joseph felt urged to travel to Palmyra. To Joseph’s horror, he discovered that, despite Martin’s commitment to keep it safe, he had lost the manuscript. When he admitted this to Joseph, Martin cried, “I have lost my soul!”5 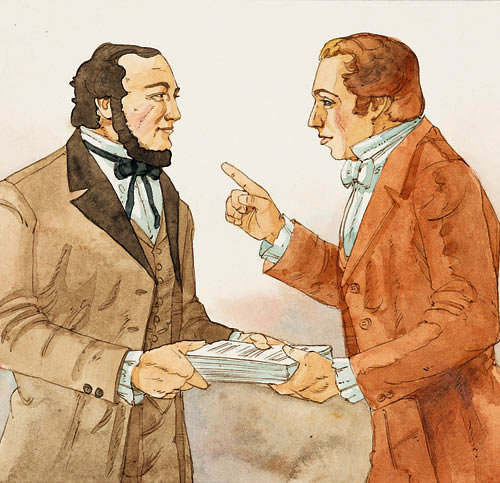 Joseph Smith giving Martin Harris the 116 pages of the manuscript. Image via lds.org.

When Joseph and Martin returned to Harmony, Moroni took back the golden plates from Joseph and chastised him for his folly.6 A revelation from the Lord likewise rebuked Joseph. “How oft you have transgressed the commandments and the laws of God, and have gone on in the persuasions of men,” said the Lord. “But remember, God is merciful; therefore, repent of that which thou hast done which is contrary to the commandment which I gave you, and thou art still chosen, and art again called to the work” (Doctrine and Covenants 3:7, 10). Moroni also promised that if Joseph was “sufficiently humble and penitent” he would once again have the plates and the ability to translate.7

Thankfully, Joseph and Martin did humble themselves and the work recommenced not long after. Emma once again acted as scribe for Joseph.8 On April 7, 1829, Oliver Cowdery took over as scribe and worked with Joseph until the end of June of that year to complete the translation.9

Toward the end of the translation, Joseph received another revelation promising that three special witnesses would be called to bear testimony of the truthfulness of the Book of Mormon (D&C 17).10 “One morning Martin, Oliver, and David [Whitmer] pleaded with Joseph to let them be the witnesses. Joseph prayed and the Lord answered, saying that if they relied on Him wholeheartedly and committed to testify of the truth, they could see the plates.”11 Turning to Martin and addressing him specifically, Joseph warned that he must “humble [himself] before God this day, and obtain if possible, a forgiveness of [his] sins” if he wished to be a witness.12 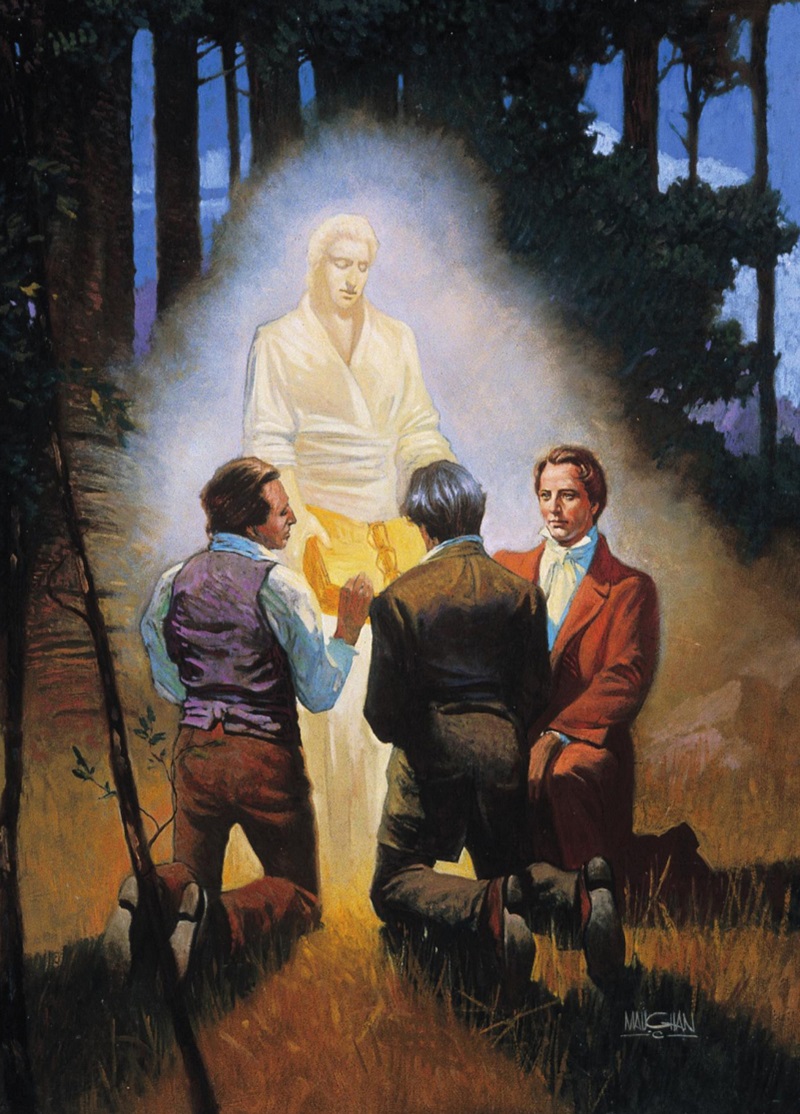 An Angel Showing the Gold Plates by William L. Maughan.

“Later that day, Joseph led the three men into the woods near the Whitmer home. They knelt, and each took a turn praying to be shown the plates, but nothing happened. They tried a second time, but still nothing happened. Finally, Martin rose and walked away, saying he was the reason the heavens remained closed.”13 With Martin gone, Joseph, Oliver, and David prayed again. This time they “beheld a light above [them] in the air of exceeding brightness.”  They soon saw that “an angel stood before [them],” and “in his hands he held the plates.” As the men watched in amazement, the angel “turned over the leaves one by one, so that [they] could see them, and discern the engravings thereon distinctly.”14

Once this vision had finished, “Joseph walked deeper into the woods and found Martin on his knees. Martin told him he had not yet received a witness from the Lord, but he still wanted to see the plates. He asked Joseph to pray with him. Joseph knelt beside him, and before their words were half-uttered, they saw the same angel displaying the plates and the other ancient objects.”15 The Lord had accepted Martin’s heartfelt repentance, and the man who had previously felt as though he had lost his soul could now proclaim: “’Tis enough! ’Tis enough! Mine eyes have beheld! Mine eyes have beheld!”16 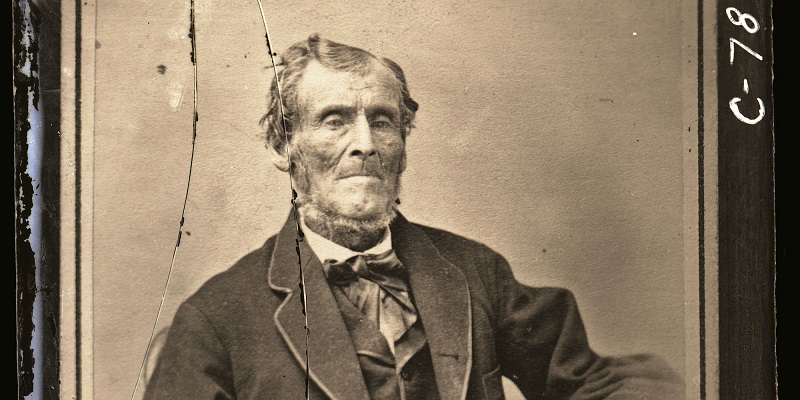 Photograph of Martin Harris via lds.org

Both Joseph Smith and Martin Harris learned many important principles about repentance with the episode involving the loss of the 116 pages.17 Consider just four of them. First, they learned that there are sometimes dramatic and enduring consequences to our sinful actions—actions that we otherwise might think aren’t very consequential. The loss of the Book of Lehi and additional material from the Book of Mormon has left an indelible, negative impact on the history of the Restoration.18 Thankfully, the Small Plates of Nephi covered some of the material lost in the 116 pages (Words of Mormon; D&C 10), and Joseph was instructed not to retranslate the lost portion of the plates of Mormon.19 Nevertheless, even though the disastrous consequences of Joseph’s and Martin’s poor decisions cannot be fully undone, the Lord could forgive and forget.

Second, both Joseph and Martin learned that each man and woman would be punished for their own transgressions, and are individually accountable before God for their actions. “Joseph dealt with some ordinary follies of youth,” observed John W. Welch. “He also learned some extraordinary lessons about accountability, especially when Martin Harris lost the 116 pages of the Book of Mormon manuscript and, as a result, the power to translate was taken from Joseph for a season. Through these experiences, he learned firsthand the foundational principles of agency, choice, and accountability.”20 He did not and could not blame someone else.

Third, while Joseph and Martin learned from painful personal experience the full weight of agency and accountability, both men also learned that it is through obedience to the laws and ordinances of the Gospel and through the Atonement of Jesus Christ that repentance works.

After obtaining the Lord’s forgiveness, Joseph was again blessed to translate the Book of Mormon. He learned from its pages the plan of salvation and the true doctrine of the Atonement of Jesus Christ. Around the time when the printing of the Book of Mormon was getting under way in the summer of 1829, Joseph received a sublime revelation directed to Martin Harris and containing the words of Jesus Himself regarding His eternal sacrifice, which opens the powers of the Atonement to all: “For behold, I God, have suffered these things for all, that they might not suffer if they would repent” (D&C 19:16).21

Fourth, the loss of the 116 pages dramatically teaches us today that even though “all have sinned, and come short of the glory of God” (Romans 3:23), we are never beyond the saving love of our Savior, who grants us ample opportunity to repent, return to Him, be healed, and resume the work of building His kingdom.22 Although Joseph and Martin had transgressed the Lord’s commandments, they were nevertheless allowed to return to their sacred calling of bringing forth the Book of Mormon after heartfelt repentance. Past sins and transgressions, when properly repented of, will not bar us from experiencing profound divine manifestations. We may not all behold visions of angels as Joseph and Martin did, but we may still experience manifestations of God’s love and the presence of His Holy Spirit. The example of Joseph and Martin in the outcome of the loss of the 116 pages teaches, as President Dallin H. Oaks promised, that “there is hope for each of us, even if we have sinned and strayed from a favored position.”23

This KnoWhy was made possible by the generous support of the Bill and Linda Perry family.

Matthew McBride, “The Contributions of Martin Harris: D&C 3, 5, 10, 17, 19,” in Revelations in Context: The Stories behind the Sections of the Doctrine and Covenants, ed. Matthew McBride and James Goldberg (Salt Lake City, UT: The Church of Jesus Christ of Latter-day Saints, 2016), 1–9.

Larry E. Morris, “The Experience of the Three Witnesses: D&C 17,” in Revelations in Context: The Stories behind the Sections of the Doctrine and Covenants, ed. Matthew McBride and James Goldberg (Salt Lake City: The Church of Jesus Christ of Latter-day Saints, 2016), 25–32.