Book of Mormon Central / KnoWhys
What Makes Mankind an Enemy to God? 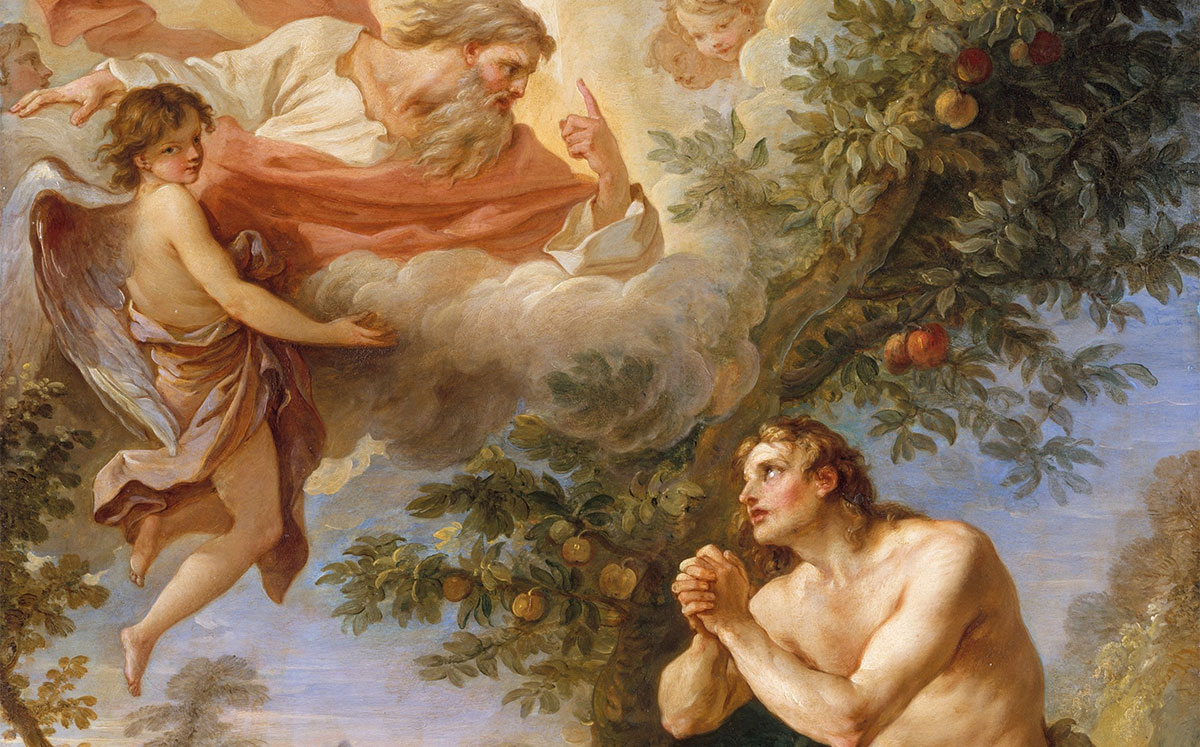 “The Rebuke of Adam and Eve,” by Charles Joseph Natoire
“For the natural man is an enemy to God, and has been from the fall of Adam, and will be, forever and ever, unless he yields to the enticings of the Holy Spirit, and putteth off the natural man and becometh a saint through the atonement of Christ the Lord.”

When speaking to his people, King Benjamin stated that “the natural man is an enemy to God, and has been from the fall of Adam, and will be, forever and ever” (Mosiah 3:19). One might initially assume from this statement that the Book of Mormon is suggesting that humankind is somehow naturally and inherently evil from birth. However, when this statement is read in context, it becomes clear that King Benjamin meant exactly the opposite:  that our relying on Christ allows us to return to our child-like state of innocence.1

Mosiah 3:18, the immediately preceding verse, helps to demonstrate this. It begins by stating that “the infant perisheth not that dieth in his infancy; but men drink damnation to their own souls.” This self-inflicted tragedy will take place unless people “humble themselves and become as little children and believe that salvation was, and is, and is to come, in and through the atoning blood of Christ, the Lord Omnipotent” (emphasis added).

If mankind, instead, is seen as being somehow evil from birth and that little children are therefore evil, it would make no sense for King Benjamin to declare that we all must become like little children. Indeed, verse 19 further supports the innocence and purity of children. It states that the only way to put off the natural man is to become “as a child, submissive, meek, humble, patient, full of love, willing to submit to all things which the Lord seeth fit to inflict upon him, even as a child doth submit to his father.” If King Benjamin thought that all people were naturally depraved from birth, it would make little sense for him to encourage us all to become like a little child.2 Indeed, verses 18 and 19 are meant to be read together, as they are chiastically intertwined. 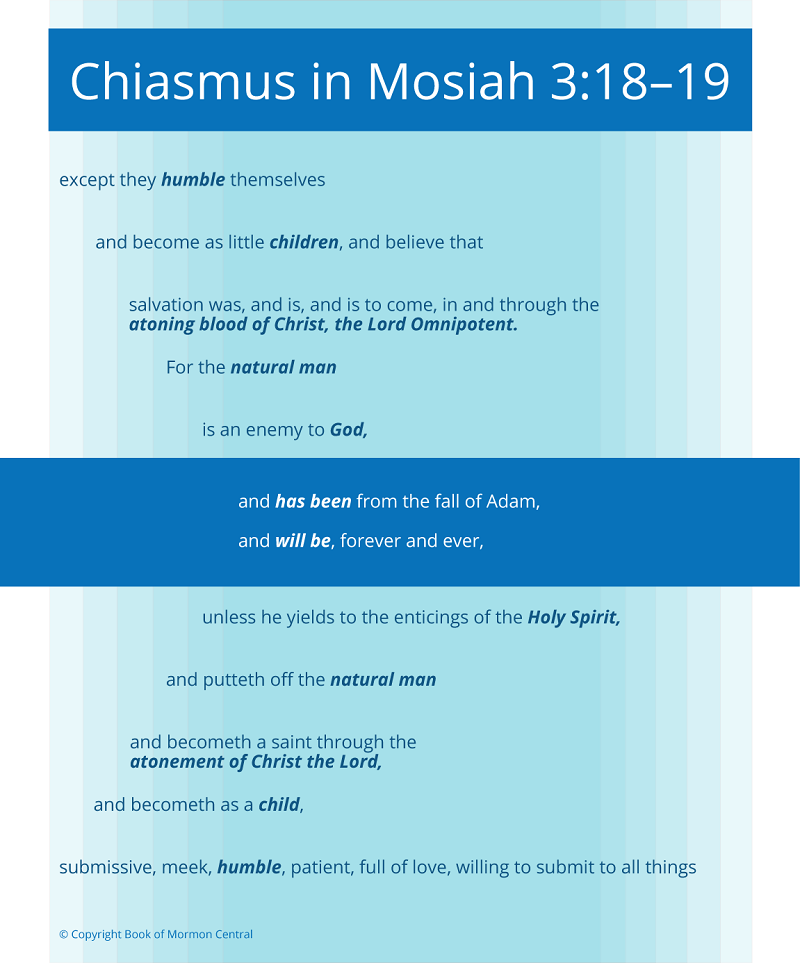 Likewise, Mosiah 3:16 affirms that "as in Adam, or by nature, they fall, even so the blood of Christ atoneth for their sins." “By nature” in this verse may mean "by birth," natural coming from the Latin word natus meaning birth.3 The sense of v. 16 thus becomes clear: as spirits born as mortal humans commit sin, the blood of Christ stands ready to atone for sins by yielding to the enticements of the Holy Spirit and so on, as v. 19 accentuates.

Indeed, Mosiah 3:19 expands the idea of the natural men being enemies to God to apply to conditions both during mortality and in eternity. Mosiah 3:19 says this condition of being a “natural man” has existed "from the fall of Adam [when man became temporal and sinned], and [would also exist infinitely] forever and ever" were it not for the Atonement of Christ. The phrase "from the fall of Adam" may relate more to timing (referring to the time from which mortals became enemies to God), than it does to causation (what made the natural man an enemy to God, namely his own sins and not Adam’s transgression). Because we are told when and how this condition will end (namely, that the Atonement of Christ can end this state of affairs only when we put off the natural man), we can better understand the importance of our knowing how this state of affairs came to be in the first place (namely, as a result of our sins).

Although complicated and subtle, Paul’s use of the words “natural man” may also run along the same lines as Benjamin’s. In 1 Corinthians 2:14, Paul stated, “But the natural man receiveth not the things of the Spirit of God: for they are foolishness unto him: neither can he know them, because they are spiritually discerned” (emphasis added). It is plausible that Paul’s and Benjamin’s uses of the phrase natural man trace back to an ancient Jewish understanding of mortality.

According to Eduard Schweizer, the word translated as “natural” came to stress “the earthly, human, and non-spiritual” elements of life as compared to the “heavenly, divine, or spiritual” parts of life.4 Similarly, for the ancient Jewish philosopher Philo, this “natural man” is what God cursed in Genesis 3:17 when He said, “cursed is the ground for thy sake.”5 Philo thought that the ground was symbolic of the earthly or “natural man,” so when God cursed the ground, He was really cursing only the “natural,” sinful and non-spiritual, side of man.6 Thus, the “natural man” had therefore been an enemy to God, under a curse by God, since the fall, much as king Benjamin, from a different vantage point, stated.

Alma 26:21, the only other passage in the Book of Mormon to use the phrase natural man, may also help explain its meaning. It states, “And now behold, my brethren, what natural man is there that knoweth these things? I say unto you, there is none that knoweth these things, save it be the penitent” (emphasis added). If the natural man cannot know of the things of God, yet the penitent can know of these things, then it seems reasonable to suppose that the “natural man” is any person who is, in particular, impenitent or unrepentant, as noted above. A person becomes an enemy to God when one yields to temptations and follows one’s fallen inclinations to transgress, to disregard spiritual things, and then remains in an unrepentant state.

When King Benjamin’s statement about the natural man is read in context, the Book of Mormon makes it clear that people are not somehow born evil. Importantly, the Book of Mormon assures every human being that God has not placed anyone in this world and made us evil merely by our existence. The “natural man” is any man or woman who does not repent or is, in other words, not “penitent,” as is powerfully stated in Alma 26. Our tendencies or capabilities to sin do naturally leave us in a sinful and wicked state, which is antithetical to God. But if we resist and put off those unholy inclinations or consequences, we are enabled to overcome being controlled by those influences and becoming enemies to God.

None of this means that all human beings are necessarily somehow God’s opponents or antithetical to Him. It is ennobling to know that all people, who are trying to do their best and repent when they make mistakes, are not enemies to God, they are simply normal children of God, trying to survive life in a sometimes-unforgiving world. Rejecting the sinful parts of ourselves, as the Book of Mormon reassuringly encourages us to do, will allow us to “put off the natural man and become a saint” through the Atonement of Jesus Christ.7

If we then yield to “the enticings of the Holy Spirit,” we can become like “a child, submissive, meek, humble, patient, full of love, willing to submit to all things which the Lord seeth fit to inflict upon him, even as a child doth submit to his father.” In so doing, we can set aside the “natural man” we all experience inside of ourselves as a consequence of our wrongs. In this way, as king Benjamin concludes, “Christ, the Lord God Omnipotent, may seal you his, that you may be brought to heaven, that you may have everlasting salvation and eternal life, through the wisdom, and power, and justice, and mercy of the Father of heaven and earth,” and thereby become more like our heavenly King, “who is God above all” (Mosiah 5:15)8