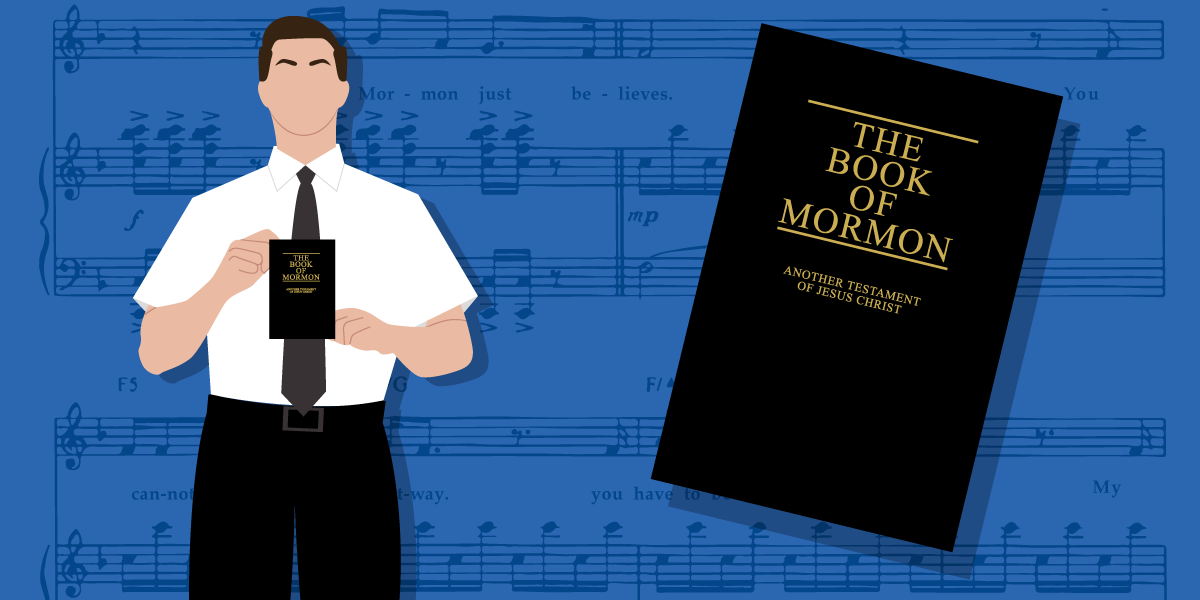 For better or for worse, the Book of Mormon Musical catapulted the Book of Mormon into the limelight of discussion in 2011. Despite the Broadway musical generating a lot of attention, its storyline has little to do with the Book of Mormon’s contents, plots, origins, or the principles it teaches. One thing the play happens to get right, however, is that the Book of Mormon has something important to say about music and performance. The Book of Mormon is a very musical book in its own right and refers to music dozens of times, in contexts of worshipping, fighting, celebrating, and praising.1

Singing in the Book of Mormon

The Book of Mormon refers frequently to singing. The people in the Book of Mormon sang praises to God after victorious battles, they sang during celebrations, and they sang during worship services.2 During the years of righteousness during the Nephite golden age, “their meetings were conducted by the church after the manner of the workings of the Spirit, and by the power of the Holy Ghost; for as the power of the Holy Ghost led them whether to preach, or to exhort, or to pray, or to supplicate, or to sing, even so it was done” (Moroni 6:9, emphasis added).

Twenty of the Book of Mormon’s twenty-four references to singing deal specifically with singing praises unto the Lord.3 Its peoples sang to praise the Lord’s victory after battle (3 Nephi 4:31–33); they sang to praise His power and atoning grace (Alma 5:9, 26); and they sang to emulate the angels in heaven. Lehi (1 Nephi 1:8) and Alma the younger (Alma 36:22) both saw visions of the heavenly choirs singing praises to God. King Benjamin (Mosiah 2:28) and Mormon (Mormon 7:7) both expressed a longing to one day join these angelic choirs above.

Instruments in the Book of Mormon 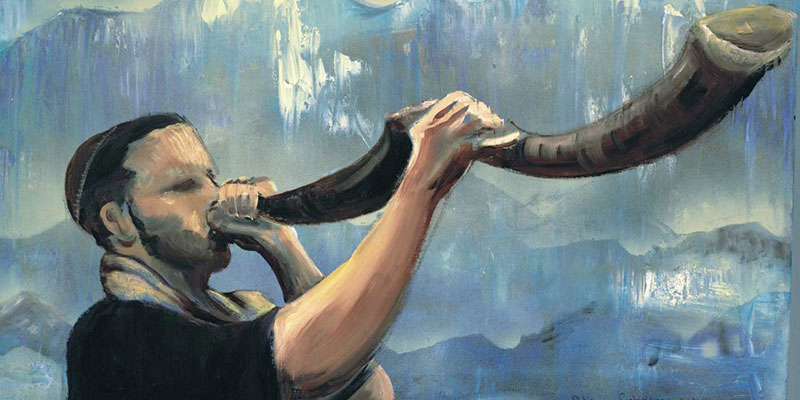 Calling the Church to Prophetic Awareness Image via P2ALM

In addition, five times the Book of Mormon mentions either a “trump” or a “trumpet,”—three times referring to trumpets of God or of angels, once calling people to attention for worship, and once summoning soldiers to battle.4 In ancient Israel, trumpets called shofars were made from the horns of animals, such as rams, and were used to signal battle, national celebrations, and ritual holidays like the Day of Atonement.5 Other trumpets, such as those played by the Levitical priests during sacrifices and ritual holidays, were made of metal.6 And in Mesoamerica, trumpets made of conch shells were often used for ritual purposes.7

In a military context, Coriantumr sounded a trump to commence the battle against the armies of Shiz.8 In worship, Alma’s desire to “speak with the trump of God” may be a reference to ancient Israelite holiday cycles.9 We know that royal coronations in the Bible were accompanied by the blaring of trumpets (2 Samuel 15:10; 1 Kings 1:39), so it may even be possible that the coronation of King Mosiah and other Nephite kings were accompanied by musical celebrations as well.

The texts of the Book of Mormon are filled with snippets of ancient psalms or songs, but it can sometimes be difficult for modern readers to recognize and hear the music because ancient poetry looked and sounded very different than our poetry or musical lyrics today. Ancient poetic lines didn’t necessarily rhyme or follow a strict meter like the poetry that most modern readers are familiar with. Instead, the poetry we find in the Bible and Book of Mormon used what is called parallelism to create beautiful literary pairings.10

For example, 2 Nephi 4 is often referred to as “Nephi’s Psalm” and is indeed a piece of Book of Mormon poetry or hymnody:

28 Awake, my soul! No longer droop in sin. Rejoice, O my heart, and give place no more for the enemy of my soul.
29 Do not anger again because of mine enemies. Do not slacken my strength because of mine afflictions.
(2 Nephi 4:28–29)

Now see these 2 verses laid out differently to reveal a more poetic structure:

Likewise, many instances of poetry in the Bible are known to have been used as songs in ancient rituals and celebrations. Many of the 150 biblical psalms were often used as hymns for temple ceremonies and covenants.12 In fact, the word “psalm” itself is even associated with “song” or “hymn” in Greek. One famous example of a Biblical song can be found in the book of Exodus, where the authors included an ancient song after the Israelites crossed the Red Sea.13 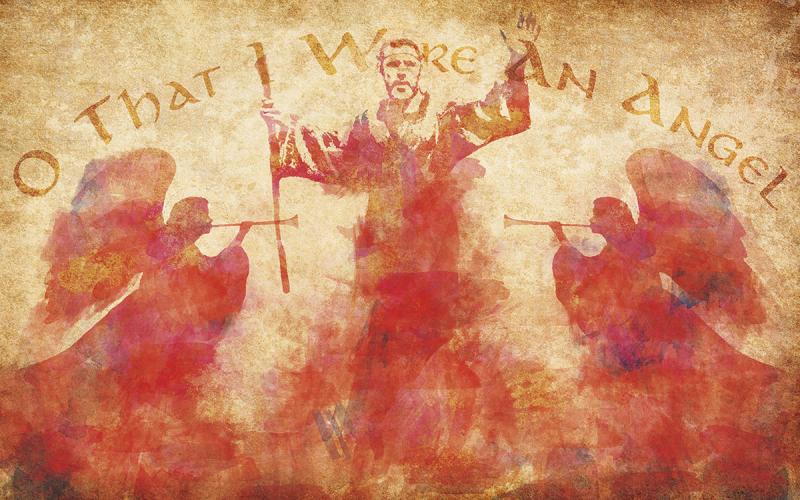 O That I Were an Angel by Book of Mormon Central.

Reading scripture involves more than just letting words pass through your eyes. Through his holy word, the love of God breaks forth in songs of the heart: “Therefore my heart greatly rejoiceth; and with my song will I praise him” (Psalms 28:7). Reading the inspired words of the Book of Mormon aloud, listening for rhythms, cadences, and harmonious sounds can bring the music of its messages to life. Its music serves several purposes.

Connecting Us to God

The Book of Mormon can inspire readers to view music as a conduit to communicate the sacred desires of their hearts to God. Singing, playing instruments, and other musical expressions have great power to invoke the presence of God. The Gospel of Matthew declares that “where two or three gather in my name, there am I with them” (Matthew 18:20). As Latter-day Saints gather and sing hymns of praise to the name of the Lord, they experience greater spiritual unity with one another and with the Lord. In modern revelation, the Lord Himself has declared His love of righteous music: “For my soul delighteth in the song of the heart; yea, the song of the righteous is a prayer unto me, and it shall be answered with a blessing upon their heads.” (D&C 25:12)

Expressing Appropriate Thanks to God

The Book of Mormon embraces righteous music as a form of expressing thanks to God. It also recognizes that, like any other powerful mode of communication, music can be enlisted for unrighteous purposes. On one occasion, the Book of Mormon condemned the rude music-making of Laman, Lemuel, the sons of Ishmael, and their wives, during their sea voyage to the promised land (1 Nephi 18:9). The Bible likewise condemns music used for wicked purposes (Psalm 69:13; Job 21:11–12).14 Recognizing the scriptural attitude toward music can help readers today to make wise media choices. Realizing that music has sacred soul-stirring powers helps to explain why music that detracts from the Spirit or which leads one to forget God and His commandments is displeasing to the Lord.

Singing the Song of Redeeming Love 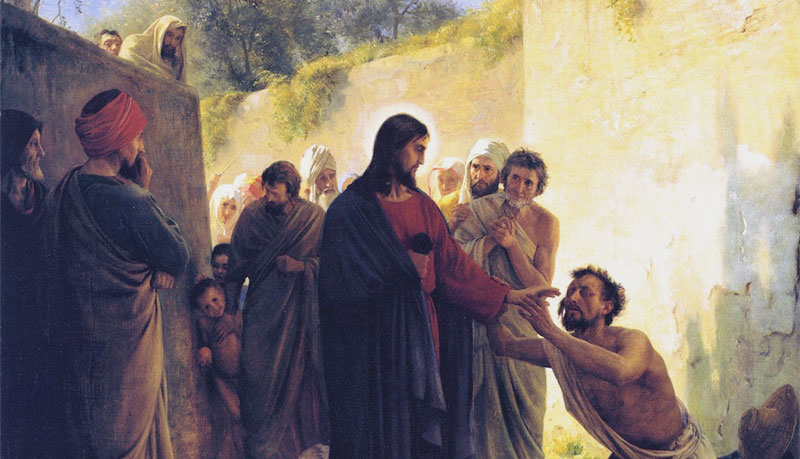 Healing of the Blind Man by Carl Bloch. Image via Wikimedia Commons.

Possibly the most important take away is that the Book of Mormon’s music repeatedly praises the Lord for His power to deliver His people from physical, mental, emotional, and spiritual dangers. Music and song can even act as a metaphor for Christ’s Atonement. Elder Jeffrey R. Holland declared that the “most precious anthem of all [is] ‘the song of redeeming love.’”15

“Fortunately, the seats for this particular number are limitless. […] In short, there is a place for everyone who loves God and honors His commandments as the inviolable measuring rod for personal behavior, for if love of God is the melody of our shared song, surely our common quest to obey Him is the indispensable harmony in it.”16

Regardless of anyone’s musical ability, the Book of Mormon teaches that the most important song to sing is the song of Christ’s redeeming love. If people embrace the Savior’s Atonement and live their days singing the song of His redeeming love, the day will come when their souls—like the “immortal spirit” of King Benjamin—“may join the choirs above in singing the praises of a just God” (Mosiah 2:28).

Failing to recognize these musical elements and spiritual themes leaves any performance of the Book of Mormon incomplete and inadequate, whether public or private, whether in the narrow gate or on the broad way.

This KnoWhy was made possible by the generous support of Anonymous.

Gary A. Rendsburg, “The Psalms as Hymns in the Temple of Jerusalem,” in Jesus and Temple: Textual and Archaelogical Explorations, ed. James H. Charlesworth (Minneapolis, MN: Fortress Press, 2014), 95–122.