Did the Book of Mormon Witnesses Really See What They Claimed? 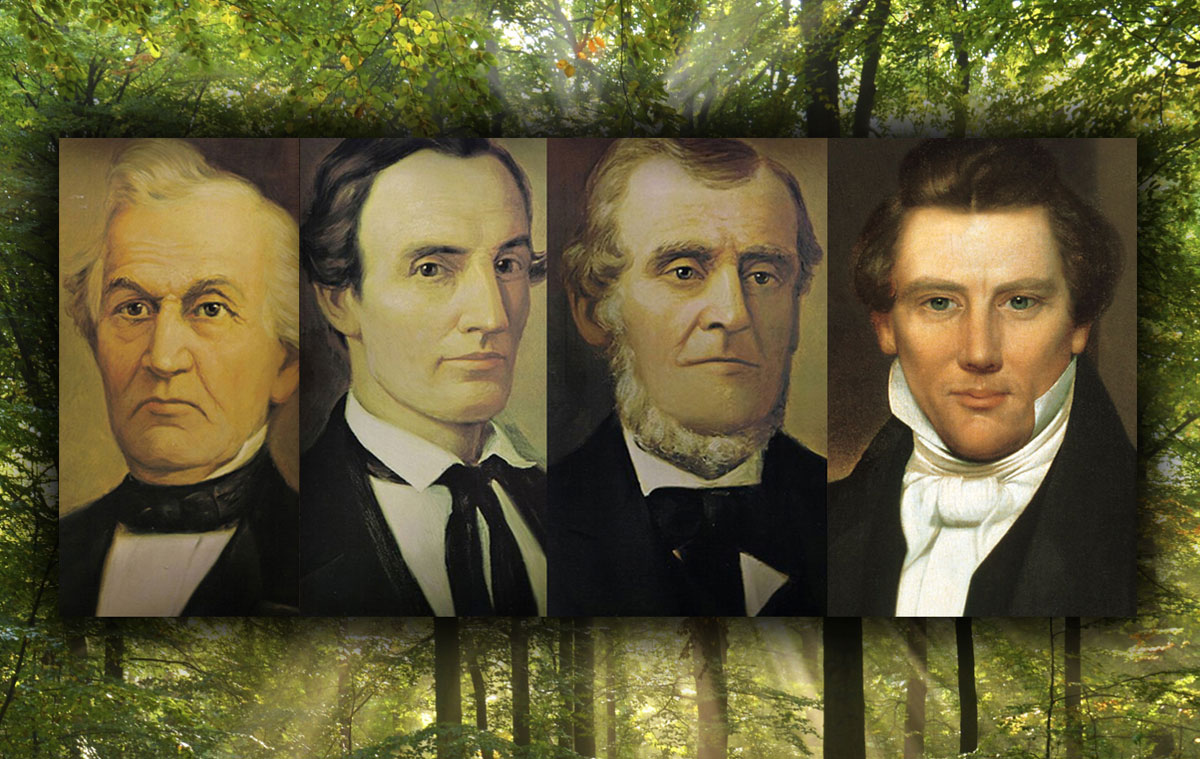 “Early Church Witnesses” by Book of Mormon Central
“And whether they were in the body or out of the body, they could not tell; for it did seem unto them like a transfiguration of them, that they were changed from this body of flesh into an immortal state, that they could behold the things of God”

The combined testimonies of the Three and Eight Witnesses of the Book of Mormon provide powerful evidence of the Restoration.1 The Three Witnesses said they beheld the angel Moroni, who showed them the gold plates and other Nephite artifacts.2 They also heard a voice from heaven, declaring the truth of the Book of Mormon’s translation. In contrast, the Eight Witnesses viewed and handled the plates without any accompanying divine manifestations.3

Throughout their lives, none of these eleven men ever denied their testimonies, which have been published in every edition of the Book of Mormon since 1830. Despite the consistency of the witnesses’ testimonies, some have questioned the reality of their experiences—especially the vision shown to the Three Witnesses.

Warren Parrish, while apostatizing from the Church in 1838, claimed that Martin Harris “has come out at last, and says he never saw the plates … except in vision” (emphasis added).4 Stephen Burnett, another dissenter, similarly represented Harris as saying that the three witnesses only saw the plates “in vision or imagination” (emphasis added).5 And John Murphy once interpreted David Whitmer as saying that his testimony was based only on spiritual “impressions.”6 In these and other cases,7 individuals have chosen to emphasize the visionary nature of the Three Witnesses’ shared experience in a way that questions its actual occurrence in reality.8

The witnesses themselves, however, openly refuted such insinuations. Harris once declared, “No man ever heard me in any way deny … the administration of the angel that showed me the plates.”9 Whitmer likewise responded to Murphy’s statement by saying that what he had seen “was no Delusion” and that he had “never at any time, denied that testimony or any part thereof, which has so long since been published” in the Book of Mormon.10 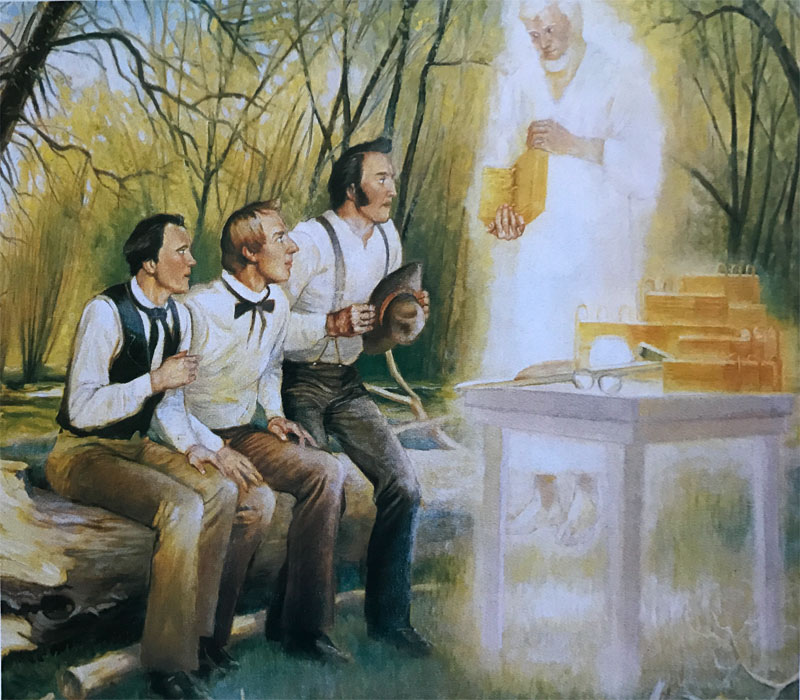 Questions about the reality of what the witnesses experienced must also be viewed in light of their other known statements. The following are just a sampling of affirmative declarations from the Three Witnesses, recorded at different times by various individuals, which emphasize the literalness and reality of their miraculous experience:

If the witnesses were so adamant about the literal reality of what they had seen, why did some of their contemporaries conclude that their experience was more imagined than real? It seems that this confusion is mostly due to differing assumptions about the nature of spiritual or visionary experiences. Apparently, some people have assumed that if an experience is spiritual in nature, then it is the same as imagination, hallucination, fantasy, and other less than real perceptions. The witnesses, on the other hand, held no such belief. In fact, their understanding of their own visionary experience is consistent with what the scriptures themselves say about such things.

Speaking of one man’s visionary ascent into heaven, the Apostle Paul declared, “whether in the body, or out of the body, I cannot tell” (2 Corinthians 12:3). Mormon expressed similar language concerning Jesus’ disciples who were caught up into heaven. He explained, “And whether they were in the body or out of the body, they could not tell; for it did seem unto them like a transfiguration of them, that they were changed from this body of flesh into an immortal state, that they could behold the things of God” (3 Nephi 28:15).16

It appears that in order to behold the angel Moroni in his resurrected glory, the Three Witnesses were similarly transfigured. This adequately explains the various reports that they saw the plates with their “spiritual eyes.”17 At the same time, it accounts for the witnesses’ insistence that their experience was as real as everyday visual sensations, like looking at sunlight, a bed, or one’s own hand. As Whitmer once clarified, “Of course we were in the spirit when we had the view, for no man can behold the face of an angel, except in a spiritual view, but we were in the body also, and everything was as natural to us, as it is at any time.”18 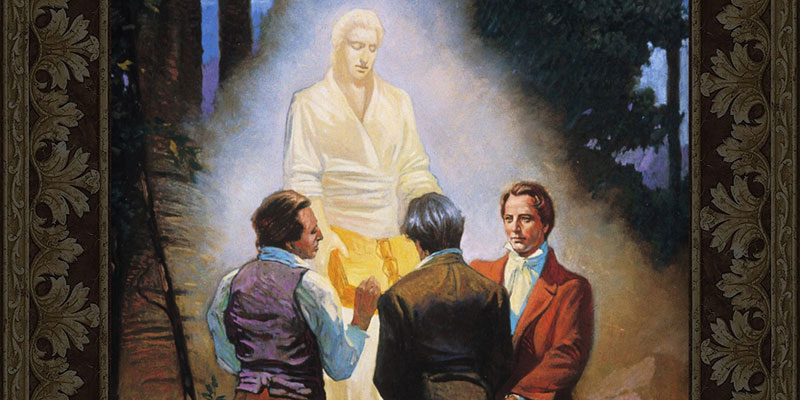 The Book of Mormon prophesies that God would call special witnesses to testify to its truth.19 The literal reality of their experiences is therefore no trivial thing. These divinely appointed witnesses help the Book of Mormon fulfill one of its primary purposes—to convince the world “that Jesus is the Christ, the Eternal God” (Title Page).20

The hearsay reports that cast doubt on the reality of the witnesses’ experiences are, by far, in the minority. And, as has been demonstrated, the witnesses themselves sometimes went out of their way to correct such misrepresentations. As Richard L. Anderson put it, “The words of the witnesses do speak for themselves, after analysis clears away garbled versions of what somebody attributed to them.”24

It’s also important to recognize that the differences between the experiences of the Three and Eight Witnesses provide mutually reinforcing testimonial evidence. Those who wish to characterize the visionary experience of the Three Witnesses as mere “imagination” or “impressions” (like Parrish, Burnett, and Murphy did) must face that fact that eight men testified, under ordinary circumstances, that they saw the plates and were even allowed to handle and heft them. On the other hand, those who assume the plates were merely fabricated or were perhaps a genuine artifact with no spiritual value, must face the miraculous and unwavering testimonies of the Three Witnesses.25 Terryl L. Givens has explained,

Taken together, the two experiences seemed calculated to provide an evidentiary spectrum, satisfying a range of criteria for belief. The reality of the plates was now confirmed by both proclamation from heaven and by empirical observation, through a supernatural vision and by simple, tactile experience, by the testimony of passive witnesses to a divine demonstration and by the testimony of a group of men actively engaging in their own unhampered examination of the evidence.26

The historical evidence demonstrates that the witnesses themselves were convinced that their experiences were real—real enough to stake their very lives and reputations on them,27 real enough that they consistently reaffirmed their published testimonies throughout their lives, and real enough that several witnesses used their last days, and even their dying breaths, to testify of the truthfulness of the Book of Mormon.28

Yet, as persuasive as the testimonies of the Three and Eight Witnesses may be, the Lord doesn’t ask anyone to solely rely upon them. The prophet Moroni promised that if those who read the Book of Mormon will sincerely ask God with “real intent, having faith in Christ,” the Lord will give them their own witness of its truth “by the power of the Holy Ghost” (Moroni 10:4).29 The testimonies of the witnesses are meant to strengthen, not replace, the spiritual witness of the Book of Mormon that is promised to all who sincerely seek it.

Daniel C. Peterson, “Tangible Restoration: The Witnesses and What They Experienced,” FairMormon presentation, 2004, 9–33, online at fairmormon.org.