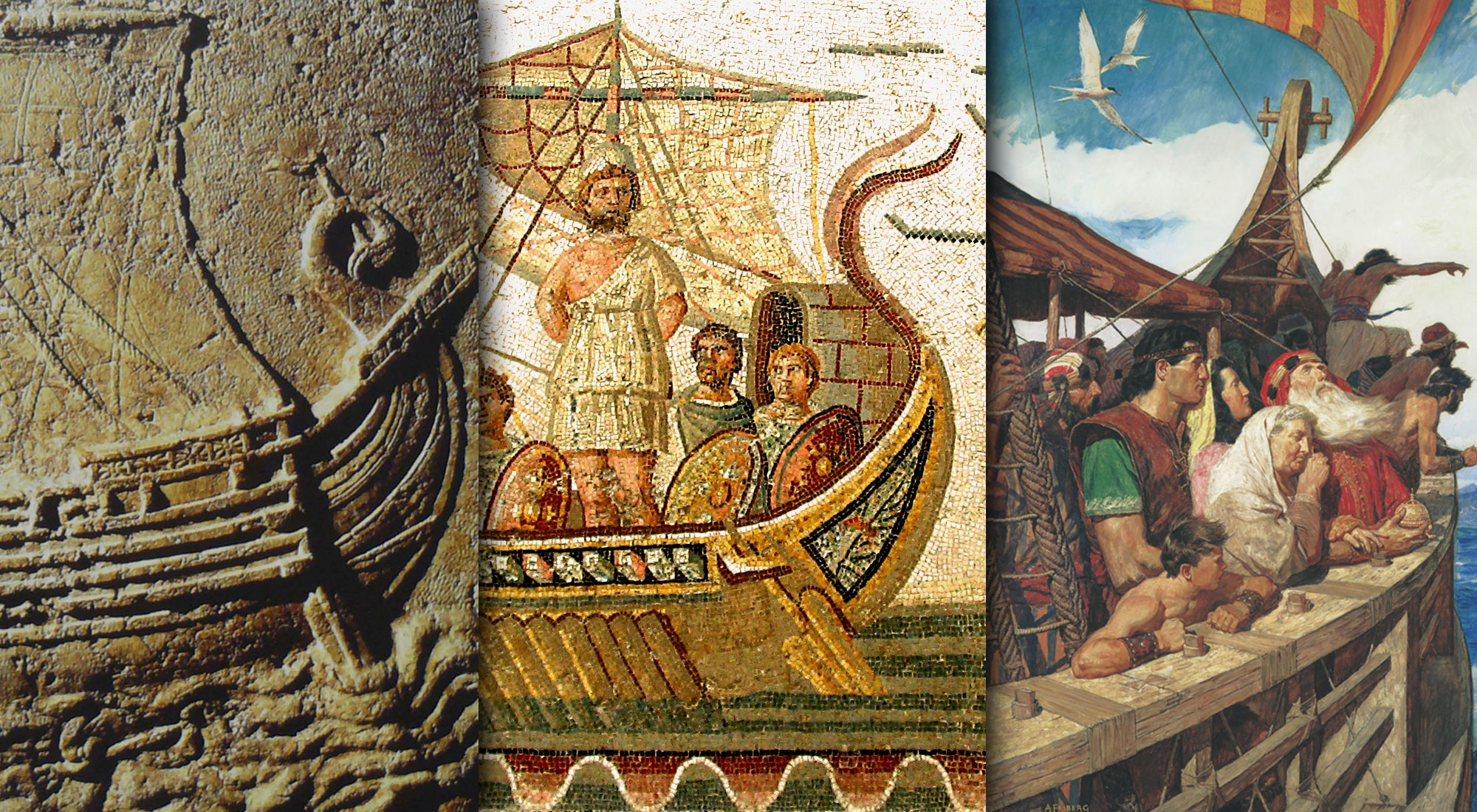 Various Sailing Vessels in Antiquity
“And it came to pass after we had all gone down into the ship, and had taken with us our provisions and things which had been commanded us, we did put forth into the sea and were driven forth before the wind towards the promised land.”

For many, it may come as a surprise to learn that many ancient people were seafarers. The ancient Egyptians, Babylonians, and Phoenicians, for example, are known to have sailed rivers and seas alike, while the stories of Odysseus and Sinbad seem to reflect real-life experiences to some extent.

With regard to ancient Jewish seafaring in particular, the non-Mormon historian Raphael Patai has looked closely at the evidence for Jewish maritime technology and expertise and concludes that ancient Jews “in monarchic times [the time of the Solomonic kingdom] were acquainted with large seagoing vessels” and that “they prized such vessels highly.”1 Patai also allows that “even though the biblical references to ships and seafaring are extremely meager, this does not mean that sea traffic and trade played a correspondingly minor role in the life of the Hebrews in monarchic times.” Thus, Patai insisted, “we are justified in assuming that . . . once their control extended to the Mediterranean coastline, the Hebrews engaged in shipping and fishing to no less an extent than the other peoples whose towns and villages bordered the Great Sea.”2 Importantly, Patai includes the Book of Mormon as an “unexpected outside source” that may be of “interest” to those wanting to know more about ancient Jewish seafaring.3 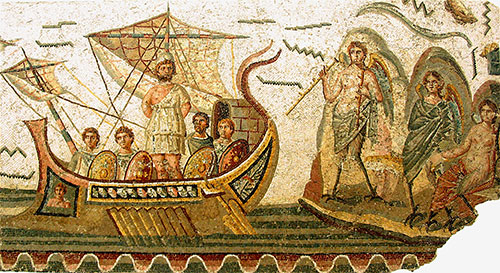 Indeed, the Book of Mormon records the migrations across the seas of three ancient groups of people from the ancient Near East to ancient America—the Jaredites, Lehites, and Mulekites (Ether 6; 1 Nephi 18:8; Omni 1:15–16). In each instance the text attributes the respective group’s safe passage to divine protection and guidance, highlighting one of the Book of Mormon’s central messages of relying on God in the face times of great trials or uncertainties.

In the past, claims of pre-Columbian transoceanic contact with the Americas were met with skepticism. With few exceptions, such as the Viking contact with coastal Canada during the 11th century AD or possible Polynesian contact with South America,4 many North American scholars dismiss such claims as outlandish and lacking any concrete historical or archaeological evidence. While this skeptical paradigm has remained dominant in many academic circles, scholars in growing numbers have argued for extensive pre-Columbian transoceanic contacts. 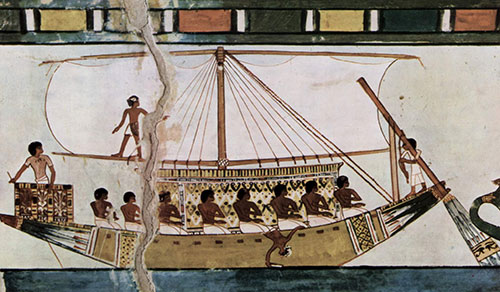 John L. Sorenson is one such scholar whose lifelong work on pre-Columbian transoceanic contacts has appeared in reputable Mormon and non-Mormon scholarly venues.5 Besides arguing for transoceanic contact himself, Sorenson and Martin H. Raish have likewise cataloged an extensive bibliography of non-Mormon academic work that argues, to varying degrees, for possible evidence of pre-Columbian transoceanic contact.6 “It is clear,” Sorenson and Raish maintained, “that the technological capacity for transoceanic voyaging has been available at a number of points in the Old World many times in the past. It is both plausible and probable on nautical grounds that numerous voyagers crossed the oceans at multiple points before the age of modern discovery.”7 Sorenson offers numerous biological evidence of transoceanic contacts as well as cultural parallels between peoples of the Old and New Worlds. 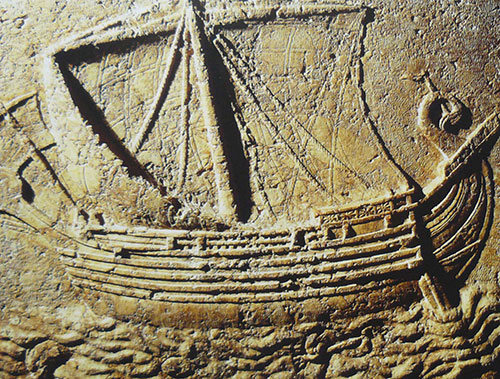 Lest one think that Sorenson is overstating his case, Michael D. Coe, an eminent authority of Mesoamerica, stated in a 2011 interview about the Book of Mormon: “I’m not entirely against the idea of transoceanic contacts [between the Old and New Worlds]. In fact, there is beginning to be evidence for it. The leading scholar of this kind of stuff is a Mormon, a friend of mine, John Sorenson, at BYU, who has written extensively on this whole thing—very interesting stuff.” 8

In a letter written to Sorenson regarding his work on transoceanic contact, Coe said, “It’s an enormously impressive piece of scholarship,” and even went so far as to say, “So much of this evidence, I think, is irrefutable.”9 These comments show considerable respect within the academic community for Sorenson’s paradigm-shifting research. 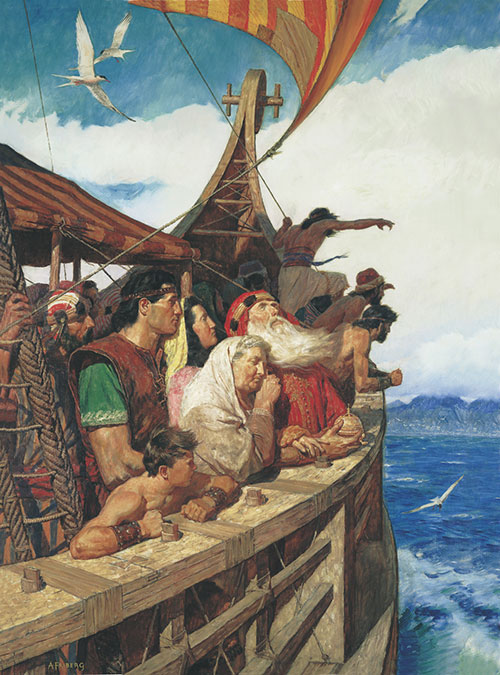 From what little is known about the ancient past, it appears that ancient people ventured out into the sea for many reasons. Some voyages were for commercial or political purposes. Other expeditions were for military conquest, as when the Greeks led by Agamemnon besieged Troy (c. 1100 BC), or when the Persians attempted to conquer Greece but were defeated in a sea battle in the Bay of Salamis (480 BC). Others, like Lehi’s group, set sail for new lands hoping to found colonies or fleeing from their enemies.

Little is known about the construction of these ancient vessels. Perhaps the Large Plates of Nephi explained such details, but that record is not included in the Book of Mormon. Nephi’s Small Plates contained information of spiritual interest, and that explains why we are only told that the ship that carried Nephi and his family to the land of promise was constructed after a manner revealed to him by the Lord:. “And it came to pass that the Lord spake unto me, saying: Thou shalt construct a ship, after the manner which I shall show thee, that I may carry thy people across these waters” (1 Nephi 17:8). Even though mocked by his brothers (1 Nephi 17:17–18), Nephi trusted the Lord and followed his instruction in building the ship.

Still, even with the best of efforts, sea travel in ancient times must have been extremely risky. This explains several details in the scriptural accounts. The story of Jonah, set before the time of Lehi, reflects the near-catastrophe that must have befallen many ships (Jonah 1:4). Evil gods and violent forces were thought to rule the waters and the deeps, both in the Canaanite epics and in the Hebrew Psalms. In fear, sailors sought divine protection, and looked for the cause of any severe weather brought upon them (Jonah 1:7-10).

Under similar conditions, Nephi feared exceedingly that his brothers’ “rudeness” and their forgetting God would cause the Lord to “be angry with us, and smite us because of our iniquity, that we should be swallowed up in the depths of the sea” (1 Nephi 18:10).

Looking back on their harrowing journey, no wonder the only explanation they could give for their safe arrival in the land of promise was that nothing but the power of God could have delivered them (1 Nephi 18:20-21), and that “the mercies of God” alone had “spar[ed] their lives, that they were not swallowed up in the sea” (2 Nephi 1:2).

Thus, in addition to being able to take encouragement from Nephi’s faith and determination in building the ship, we can now also appreciate that there is evidence that ancient people really did sail across the sea and reach distant lands.