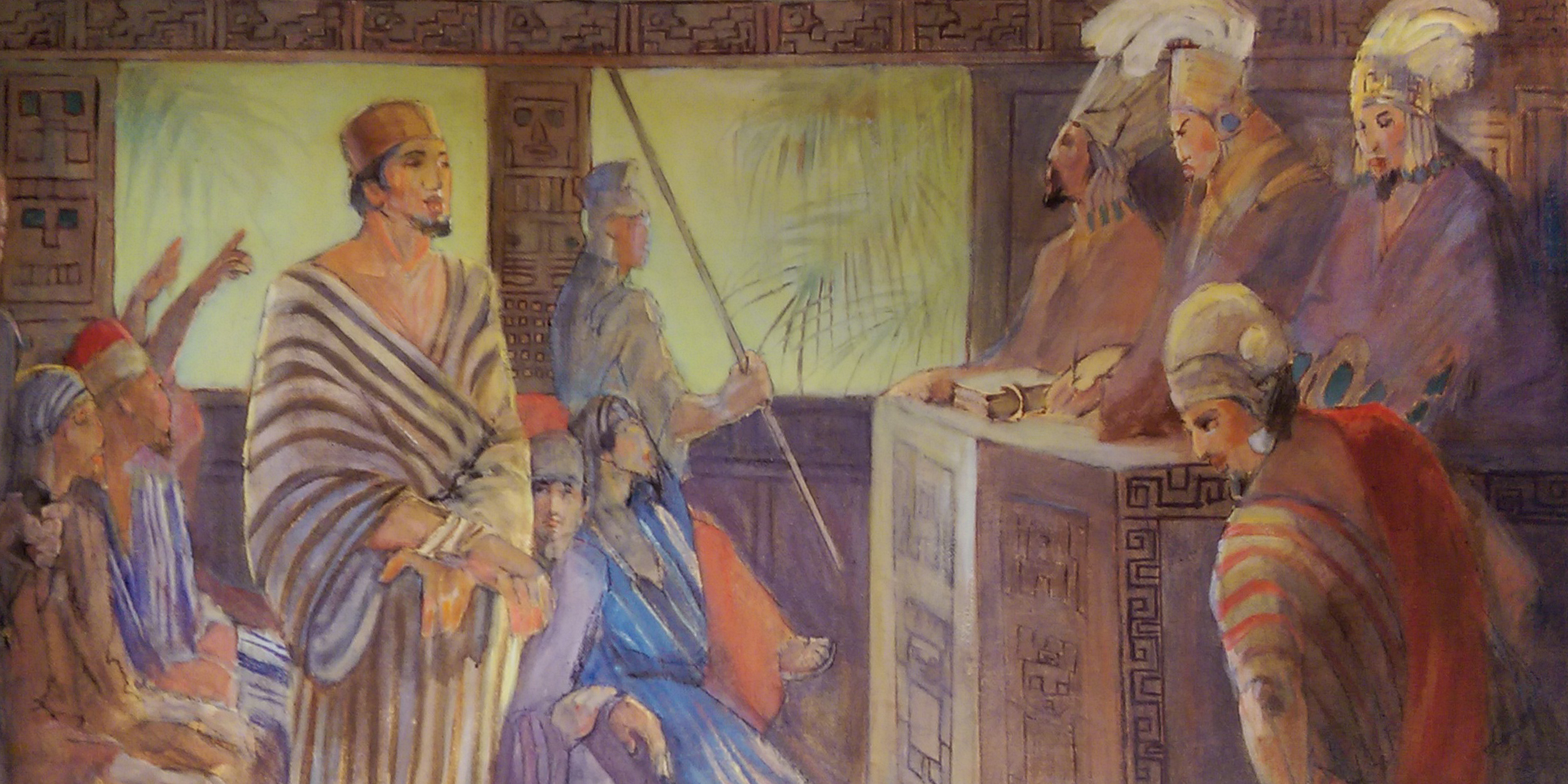 Abinadi Before King Noah by Minerva Teichert
"And now if Christ had not come into the world, speaking of things to come as though they had already come, there could have been no redemption."

Speaking of Christ's coming, Abinadi used past tense verbs,1 and then explained his way of speaking by adding that he was “speaking of things to come as though they had already come” (Mosiah 16:6, emphasis added). Using past tense verbs or participles to speak of something that will yet happen in the future may seem unusual to modern readers, but this is actually a recognized characteristic of ancient Hebrew prophecy.  Abinadi’s grammatical usage is not unique in the Book of Mormon. It can be found in several passages in the Bible.

BYU professor Donald Parry has noted: “Old Testament prophets prophesied using these forms (past tense, past participle verb forms) ‘to express facts which are undoubtedly imminent, and therefore, in the imagination of the speaker, already accomplished.’”2 Parry and others refer to this usage as “the prophetic perfect.”

He cites an example of the use of the prophetic perfect in Isaiah’s prophecy of the Savior’s atoning suffering in Isaiah 53.  Isaiah uses the past and perfect tenses to describe a series of events that would happen more than seven hundred years in the future.3

Surely he hath borne our griefs, and carried our sorrows: yet we did esteem him stricken, smitten of God, and afflicted. But he was wounded for our transgressions, he was bruised for our iniquities: the chastisement of our peace was upon him; and with his stripes we are healed. All we like sheep have gone astray; we have turned every one to his own way; and the Lord hath laid on him the iniquity of us all. He was oppressed, and he was afflicted, yet he opened not his mouth: he is brought as a lamb to the slaughter, and as a sheep before her shearers is dumb, so he openeth not his mouth. (Isaiah 53:4-7, as quoted in Mosiah 14:4-7).4 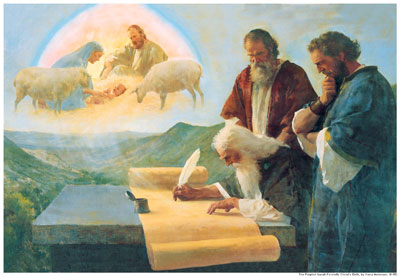 The Book of Mormon prophets were, no doubt, very well versed in this prophetic style of Isaiah and other Old Testament prophets. In fact, Abinadi had just finished quoting Isaiah 53 when he spoke to the priests of Noah in the same manner (Mosiah 14).  His explanatory interjection, “speaking of things to come as though they had already come,” was most likely for the benefit of the priests who had apparently neglected their study of scripture and perhaps lacked many copies to study. It also reinforces Abinadi's testimony that the words of the prophet in Isaiah 52 and 53 were still to be fulfilled in the future, not that they had been fulfilled already as Noah's priests may well have held.

Lehi and Nephi, who were much closer, chronologically, to Isaiah, also made use of the prophetic perfect.  As Parry points out, Lehi declared, “I have obtained a land of promise” (1 Nephi 5:5, emphasis added), long before he ever reached the promised land. Nephi said the following of Jesus’ baptism hundreds of years before the event: “Wherefore, after he was baptized with water the Holy Ghost descended upon him in the form of a dove” (2 Nephi 31:8, emphasis added).

Many more examples of this style of ancient Hebrew prophetic speech occur in the Bible and Book of Mormon.5 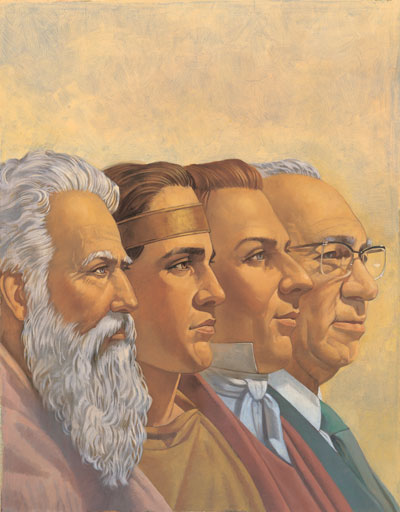 Recognizing the presence of the prophetic perfect in the Book of Mormon explains why Nephite prophets spoke as they did. It also helps establish its veracity and reliability as an ancient religious text written by prophets who came from the ancient Israelite prophetic milieu found in the Old Testament. The fact that Lehi, Nephi, and other Book of Mormon prophets speak of events that they have seen in vision in the past or perfect tense authentically links them with the Israelite prophetic tradition.

Although it is not known exactly why the prophets spoke after this manner, it may have been because they had seen these events in vision. Thus, it was natural for them to report what they had seen by using past tense verbs in speaking of what they had already witnessed.

Knowing that their use of past tense verbs might be confusing to some, the early Book of Mormon author Jarom went out of his way to explain that the use of the prophetic past was a conscious Nephite linguistic practice. He encouraged faithful readers to look forward to the future while at the same time believing in God’s foreordained past. Jarom states:

Wherefore, the prophets, and the priests, and the teachers, did labor diligently, exhorting with all long-suffering the people to diligence; teaching the law of Moses, and the intent for which it was given; persuading them to look forward unto the Messiah, and believe in him to come as though he already was. And after this manner did they teach them. (Jarom 1:11; emphasis added) 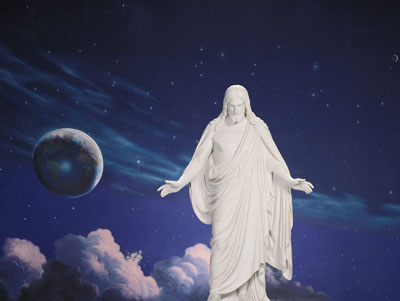 Jarom’s people, much like the priests of Noah Abinadi addressed, had already grown apart from the verbal conventions of their ancestors. Thus he felt a need to clarify this usage so that their meanings would not be misunderstood.

From an eternal, prophetic perspective, all things are present before God, whether they are past, present, or future. The infinite Atonement in the meridian to time reaches back to redeem all who have fallen because of Adam's transgression (Mosiah 3:11), and it works forward to save all those who “ever were since the fall of Adam, or who are, or whoever shall be, even unto the end of the world” (Mosiah 4:7).

For all these reasons, Book of Mormon writers spoke of future events as though they had already happened. The prophets of Old had an unshakable faith in the coming Messiah, and spoke of it in certain terms. We, likewise, can look back to the Atonement, and forward to the future, with equal faith and certainty in God's promises to His children. Even though Jesus Christ's atonement is now thousands of years in the past, believing in the atoning power of Jesus Christ still requires unshakable faith to get us through life's challenges. As we look forward to our own unknown futures, we can hold fast to our faith in the Savior and know that God will take care of us in our time of need.