Why Are Lehi’s Visions Like Those of Other Prophets in His Day? 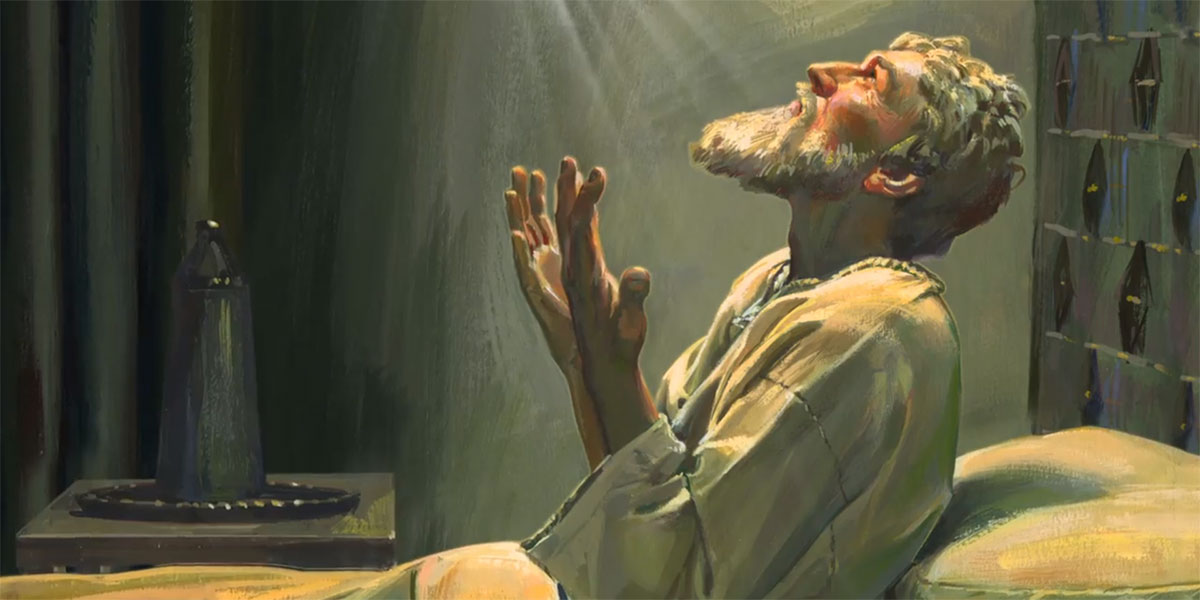 Painting by Robert T. Barrett. Image via LDS Media Library
"And they came down and went forth upon the face of the earth; and the first came and stood before my father, and gave unto him a book, and bade him that he should read. And it came to pass that as he read, he was filled with the Spirit of the Lord."

It has been common in LDS scholarship to compare Lehi, the founding patriarch-prophet of the Book of Mormon, to perhaps the most famous prophet in the Jerusalem of Lehi’s time, Jeremiah.1 Because Jeremiah had been prophesying in Jerusalem before the beginning of 1 Nephi 1, it is almost certain that Lehi knew him. Lehi’s prophetic message regarding the destruction of Jerusalem was similar to that of Jeremiah, so comparisons between the two prophets come naturally.

However, there were many other prophets called by God at roughly the same time (1 Nephi 1:4), including Habakkuk, Ezekiel, Daniel, and others.2 A study of the words and phrases used in the accounts of the prophetic callings and visions of these contemporaries reveals similarities that go beyond the common message of Jerusalem’s destruction.

Some elements in Lehi’s reaction are unique to Lehi, but several are also similar to reactions of other prophets in his day.3 For example, when Habakkuk saw the destruction that would accompany the Lord’s coming, he exclaimed: “When I heard, my belly trembled; my lips quivered at the voice: … I trembled in myself, that I might rest at the day of trouble” (Habakkuk 3:16). Daniel also had dream visions while lying in his bed (Daniel 7:1) and was similarly exhausted after receiving a heavenly visitation. He recorded: “[W]hen he came, I was afraid and fell upon my face: … And I, Daniel, was overcome and lay sick for some days … I was astonished by the vision and did not understand it” (ESV/KJV Daniel 8:17, 27).

In Lehi’s dream, he was “carried away in a vision,” “saw the heavens open” and “saw God sitting upon his throne,” surrounded by angels (1 Nephi 1:8). In one of his earliest visions, Ezekiel recalled “that the heavens were opened, and I saw visions of God” (Ezekiel 1:1). He then saw the Lord seated on his throne, accompanied by angelic beings, just like Lehi did.4 Later, when Ezekiel was shown his famous vision of the valley of dry bones, he likewise reported that the “hand of the Lord was upon me, and carried me out in the spirit of the Lord” (Ezekiel 37:1).5 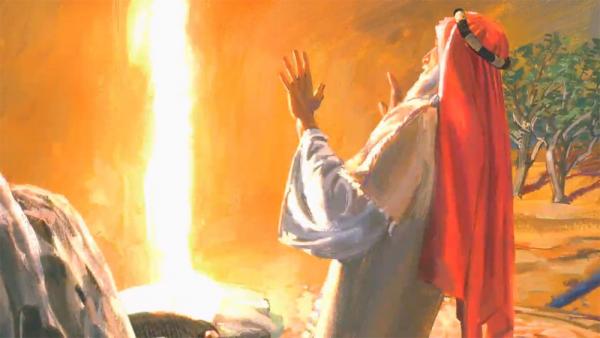 In addition to beholding a being descending out of heaven whose brightness was “above that of the sun at noon-day,” Lehi saw twelve others whose “brightness did exceed that of the stars of the firmament” (1 Nephi 1:10). He was likely being shown the “Lamb of God,” as well as the “twelve apostles of the Lamb,” as they would appear in their future, glorified, resurrected state (1 Nephi 12:6, 9). Similarly, Daniel was later shown that when the “wise” (those destined for “everlasting life”) and “they that turn many to righteousness” are resurrected, they “shall shine as the brightness of the firmament … as the stars for ever and ever” (Daniel 12:2–3).

One of the central features of many of these prophets’ visions is the giving of a heavenly book for the prophet to read which revealed future events. Nephi recorded that “the first [heavenly messenger] came and stood before my father, and gave unto him a book, and bade him that he should read. And it came to pass that as he read, he was filled with the Spirit of the Lord” (1 Nephi 1:11–12). In a similar manner, when Ezekiel saw the Lord on his throne, he was given “a roll of a book” (a scroll). Ezekiel recorded that “the spirit entered into me when he spake unto me” (Ezekiel 2:2, 9).6 Daniel was also shown a heavenly book about future events that he was instructed to seal up and which would remain sealed “till the time of the end” (Daniel 12:1, 4, 9).7

The contents of the revelation may have initially brought fear, but by the end of this interaction with the divine, the prophet often felt great joy and a desire to praise God for His mercy and marvelous works. For instance, Lehi’s “soul did rejoice, and his whole heart was filled because of the things which he had seen” in his vision (1 Nephi 1:15). After Ezekiel was commanded to “eat” the scroll of prophecy that the Lord had given him, he partook and said that “it was in my mouth as honey for sweetness” (Ezekiel 3:3). And Habakkuk, who had been greatly afraid of the vision he was shown, ended his account by praising God and exclaiming: “Yet I will rejoice in the Lord, I will joy in the God of my salvation” (Habakkuk 3:18).8

Although comparisons between Lehi and Jeremiah are natural and welcome, comparing Lehi to other contemporary prophets is also a very fruitful endeavor. Lehi had prophetic points in common with all of his true prophetic contemporaries, including Jeremiah, Ezekiel, Daniel, and Habbakuk.

The content and style of Jeremiah’s visions can be seen as somewhat different from the visions of some of these other prophets. Jeremiah’s prophecies have been called “introspective, self-revelatory and biographical, more private cries of distress than prophetic.”9 In this regard, Lehi’s visionary dream of the tree of life (1 Nephi 8) was deeply introspective, spiritually enlightening, and had direct bearings on his personal concerns about his sons who were turning away from the path that leads to eternal life and joy. Lehi and Nephi (in 2 Nephi 4) were introspective, much as Jeremiah was a “suffering prophet.” 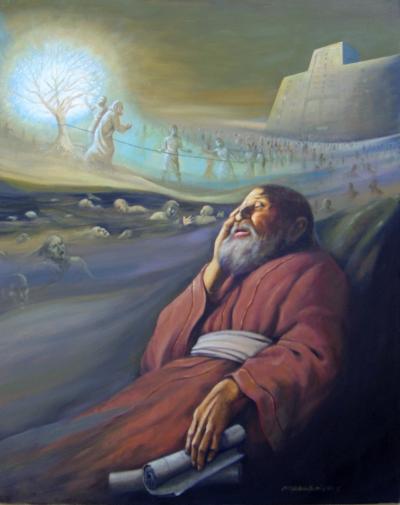 At the same time, Ezekiel epitomized the “visionary prophet,” and so did Lehi. Ezekiel is considered to be “the first apocalyptic prophet,” or the first biblical prophet to emphasize visions over words and the revelation of heavenly “mysteries” regarding the events of the end times.10 The book of Daniel is similar to Ezekiel in many ways, especially regarding the emphasis on visions and on the revelation of God’s mysteries.  The Book of Mormon refers to Lehi as a “visionary man.”11 Like Ezekiel and Daniel, he dreamed dreams and saw visions.

While some people in Jerusalem at the time, which Laman and Lemuel seemed to follow, used the idea of “visionary” in a pejorative manner,12 Numbers 12:6 unequivocally declares: “If there be a prophet among you, I the Lord will make myself known unto him in a vision, and will speak unto him in a dream.”13

Thus, Lehi was not a false prophet, nor was the content of his visions odd or anachronistic for his time period. He was a prophet in the fullest sense of the word. His visions fit into the style of wide-scale, symbolic prophecy recognizable in the books of Ezekiel, Daniel, and other Old Testament prophets—a style that would be termed “apocalyptic” in its later Jewish literary manifestations.14 At the same time, Lehi was introspective, inspiring, and personal.

Modern readers can take an important lesson from this. The Lord talked to Jeremiah in a different way than he talked to Ezekiel, and he may speak to each of us differently as well. That is as it should be, for the Lord “speaketh unto men according to their … understanding” (2 Nephi 31:3). He may also speak to each of us, as He did to Lehi, in many ways (cf. Isaiah 55:8–9). We should not expect our spiritual experiences to be the same as those of our friends or family, nor should we expect revelations to come to us all in the same manner of speaking or mode of communication. The Lord speaks to us as complicated individuals with complex problems that He knows and understands best of all.

Neal Rappleye, “The Deuteronomist Reforms and Lehi’s Family Dynamics: A Social Context for the Rebellions of Laman and Lemuel,” Interpreter: A Journal of Mormon Scripture 16 (2015).