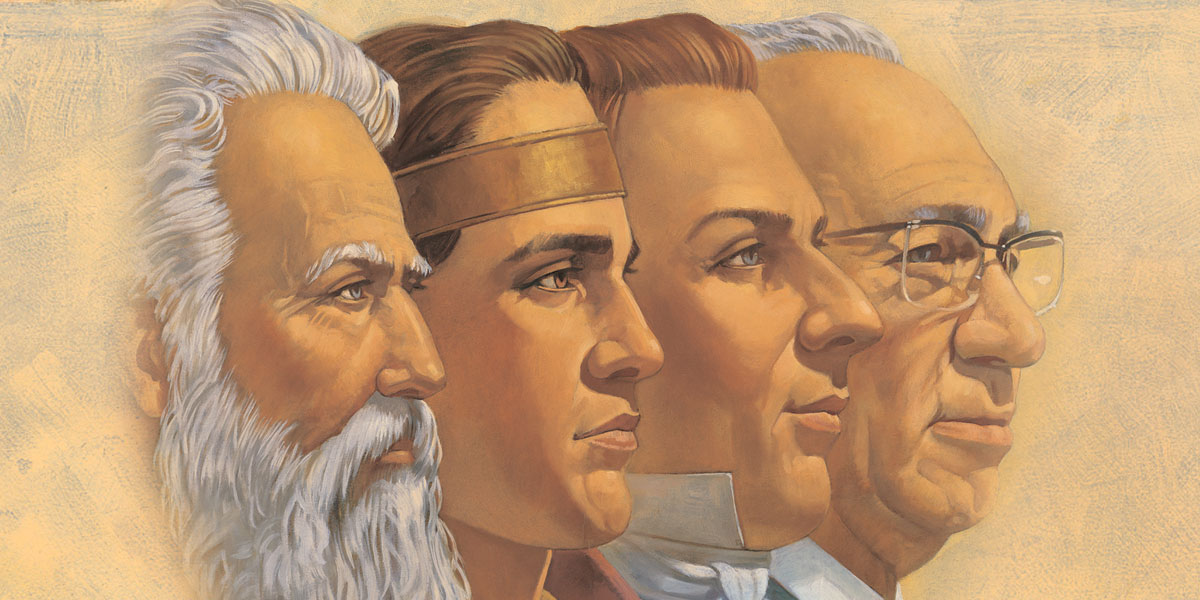 Four Prophets by Robert T. Barrett via lds.org
“He ... cried with a loud voice, and prophesied unto the people whatsoever things the Lord put into his heart.”

When Samuel the Lamanite prophesied on the walls of Zarahemla, he spoke the words that “the Lord put into his heart” (Helaman 13:4). When the prophet Alma the Younger met his soon-to-be companion, Amulek, he told him that he had “been called to preach the word of God among all this people, according to the spirit of revelation and prophecy” (Alma 8:24). Jacob, the son of Lehi, said that he had “many revelations and the spirit of prophecy” (Jacob 4:6). The Nephites often appointed as their chief captains “some one that had the spirit of revelation and also prophecy” (3 Nephi 3:19). All told, the Book of Mormon mentions prophets or prophecy over 350 times. Clearly, this book has a lot to say about prophets and revelation.

Over the years, the many prophets in the Book of Mormon served in many different prophetic roles. So it can be hard, at times, to know what the terms “prophet” and “revelation” mean from one time to another. As the Apostle John A. Widtsoe has noted, “The principal business of a prophet has mistakenly been thought to foretell coming events, to utter prophecies, which is only one of the several prophetic functions.”1 A careful look at the Book of Mormon shows, as Elder Widtsoe noted, that prophets do a lot more than tell the future.

Although about half of the references to prophets and prophecy in the Book of Mormon involve cases in which the prophet was involved in telling about things to come, they are often shown doing many other things as well.2 The prophet Alma, for example, was able to know the thoughts of Zeezrom “according to the spirit of prophecy” (Alma 12:7), an act of discerning the present rather than telling the future. Nephi the son of Helaman knew details about wicked events in the recent past, including how their chief judge had been assassinated (Helaman 8:27). Five men present said that if they found that this was true, they would know that Nephi was a prophet (Helaman 9:2). Once again, this is an example of a case where a prophet had knowledge of the past and present, but does not mention the future. 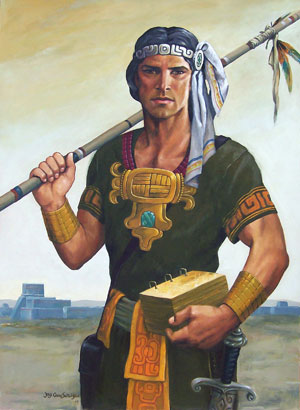 Some Book of Mormon Prophets (capital P) were responsible for leading God’s church with priesthood keys, like Moses had been in the Bible. But the Book of Mormon also shows that individuals can act as prophets or prophetesses (lowercase p), as Miriam, Deborah, or Huldah, in the Bible did, receiving a divine commission to preach and testify, even though they weren’t presiding church authorities.3 Samuel the Lamanite, for example, was referred to as a prophet (3 Nephi 8:3), as was Nephi son of Helaman (Helaman 11:18). Yet, when people believed in the words of Samuel, they did not go out to Samuel to be baptized; instead they went to Nephi, the head of the church (Helaman 16:3). This shows that Samuel was likely a prophet (lowercase p), while Nephi was a Prophet (capital P).

One key to understanding the role of a prophet as a spokesman for God is the use of the phrase, “Thus saith the Lord.” Variations of this phrase appear 43 times in the Book of Mormon and are common in the Old Testament as well.4 In the ancient Near East, kings and emperors often sent messengers to recite declarations to the people. When messengers arrived with a statement from the ruler, they would begin with the words, “thus saith the great king” (2 Kings 18:19). Prophets thus fittingly used the phrase, “thus saith the Lord,” because they were messengers from God, the true “God of gods, and a Lord of kings” (Daniel 2:47).5

Of course, sometimes prophets do prophesy of what will happen in the future because that is what they received from God through revelation.6 Nephi, the son of Helaman, for example, declared, “Except ye repent, thus saith the Lord, ye shall be smitten even unto destruction” (Helaman 10:4). That same Nephi reported what God told him and introduced it with the traditional phrase, “Thus saith the Lord.” He also went on to talk about what was going to happen in the future, as given to him by revelation from God. Father Lehi, his son Nephi, Abinadi, and Samuel the Lamanite also made prophecies about future events.7 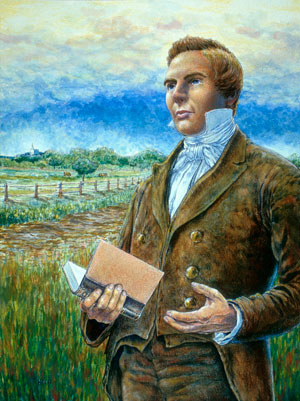 Religious scholars have offered many definitions of what it means to be a prophet. They find that prophets may be seen as foretellers of the future, or as those speaking forth with bold authoritative voices of warning. Prophets are those who discover, reveal, or recover truth. They are known for establishing social righteousness and for speaking out against injustice and class distinctions. Often they are powerful charismatics, possessing and using many gifts of the spirit.

Other times, a prophet is one who endures and overcomes suffering, who, in spite of painful mistreatment, is still an embodiment of love for all humanity. As a seer, a prophet may know God by direct personal encounters and visions. And some prophets are required to seal their testimonies with their blood in martyrdom. As Truman G. Madsen has pointed out, scholars are happy to apply the title of prophet to a person who manifests one or two of these rare spiritual traits. What then, he asked, should we say of a man, such as Joseph Smith, who fulfills all of these characteristics?8

With this broad understanding of prophets in mind, the Book of Mormon demonstrates many of the things a prophet can do and be. One thinks of Samuel and Nephi as foretellers, of Alma in Ammonihah as a voice of warning, and of the brother of Jared as a discoverer of truth. King Benjamin prophesied of Christ and thus established social justice by way of covenant among his people. The prophet Abinadi suffered a martyr’s death for refusing to retract his prophecies. Mormon embodied the love of Christ for all mankind, including his enemies. Seers like Lehi and Alma the Younger saw the heavens opened and conversed with God. The Book of Mormon is truly a book of prophets, a book full of prophecy, and a book of real-life revelation. It teaches all about the prophets of the true and living God, who is God of the past, present, and future. 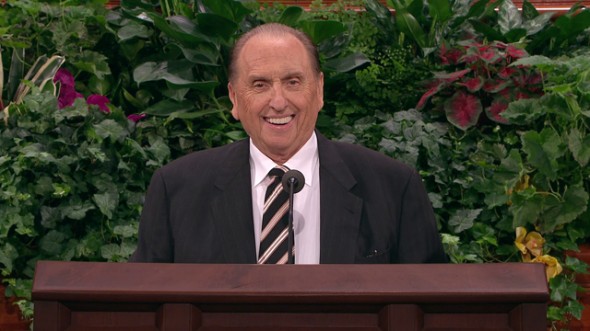 Today, as they did in Book of Mormon times, prophets in our dispensation testify of Jesus Christ, of what he has done, who he is, and what he will bring to pass in coming years. They boldly declare the will of the Lord, and speak out against sin (Mosiah 16:13). They do this in kindness and love through the “spirit of revelation” from God which is communication from God to His children (Alma 5:46). This communication from God comes through impressions, thoughts, and feelings from the Holy Ghost, and also through visions, dreams, angelic visitations, and in a variety of other ways.9

Like Nephi, the son of Nephi, was the prophet to his people in 3 Nephi, the President of The Church of Jesus Christ of Latter-day Saints is God’s prophet to all the people of the earth today.10 He is a prophet, seer, and revelator and the only person on the earth authorized to exercise all priesthood keys and who receives revelation to guide the entire Church.11 Those who heed his council can avoid the deception that is all too common in the world today.

As followers of Christ diligently study the words of prophets, both ancient and modern, they will learn truth and receive spiritual guidance. Knowing that prophets are authorized messengers from God can help everyone that hears them to have confidence in their message. Through the gifts of the Spirit, all people can then recognize the truth and goodness of their words, which God gives through His prophets to guide all of His children. With that testimony and inspiration, all individuals can receive personal revelation to help them know how to make righteous choices and to act in faith through the challenging situations as well as the joyous times of their lives.