Book of Mormon Central / KnoWhys
Why did Mormon Emphasize the Zoramites’ Costly Apparel? 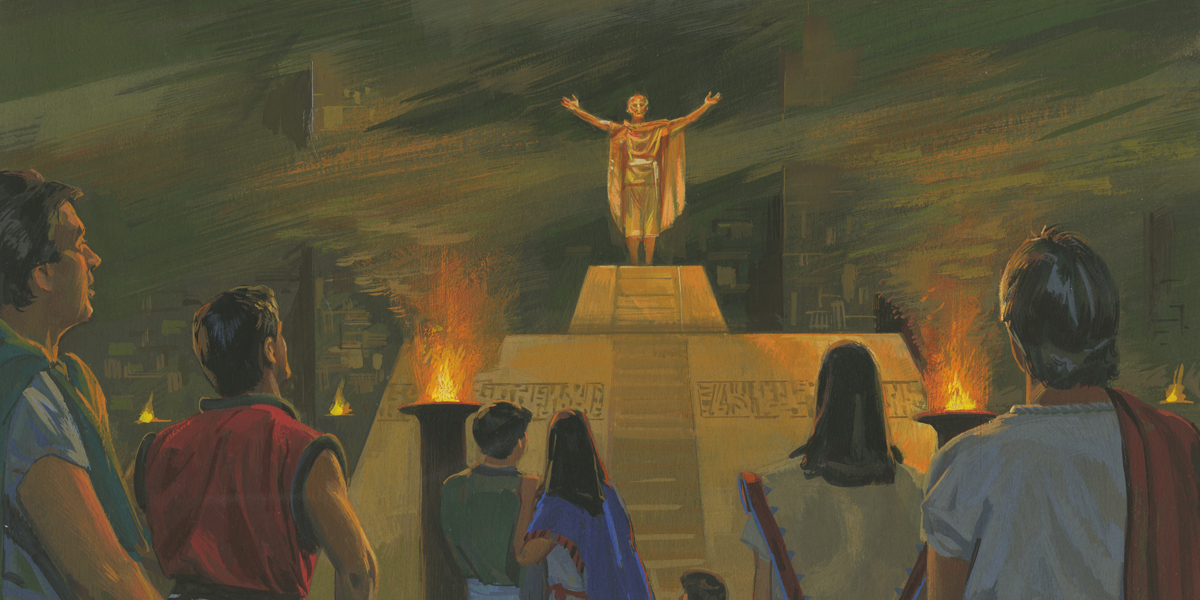 Zoramites and the Rameumptom by Jerry Thompson via lds.org
"Behold, O my God, their costly apparel, and their ringlets, and their bracelets, and their ornaments of gold, and all their precious things … and behold, their hearts are set upon them."

When Alma and his missionary companions journeyed to Antionum,1 they found that the dissenting Zoramites “did worship after a manner which Alma and his brethren had never beheld” (Alma 31:3). The Zoramites had constructed a “Rameumptom, which, being interpreted, is the holy stand” (v. 21). Mormon described it as being “high above the head; and the top thereof would only admit one person” (v. 13).2

From this elevated position, “they did offer up, every man, the selfsame prayer unto God” (Alma 31:22). This rote prayer repeatedly emphasized the Zoramites’ superior status as elected and chosen by God (vv. 16–18). It condemned the religious traditions of the Nephites as “foolish” (v. 17). And it boldly declared “that there shall be no Christ” (v. 16).

In a stirring lament, Alma declared this practice of worship to be “gross wickedness” (Alma 31:26).3 Interestingly, he also described specific features of the “costly apparel” of these affluent Zoramite worshipers: “their ringlets, and their bracelets, and their ornaments of gold, and all their precious things which they are ornamented with” (v. 28).4 Parrish Brady and Shon Hopkin noted that “the Rameumptom … provided a perfect opportunity for the individual at the top to show off his or her attire and adornments to the rest of his community.”5 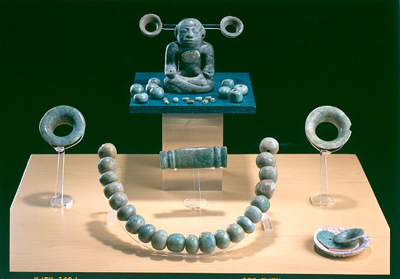 Jadeite jewelry from the Pyramid of the Moon, Teotihuacan, ca. 400-500. Image via mesoweb.com

In the next chapter, readers learn that the poor among the Zoramites were “cast out of the synagogues because of the coarseness of their apparel” (Alma 32:2). When Alma and Amulek saw that these poor Zoramites were prepared to hear their message (see v. 6), they repeatedly “highlight[ed] the tension caused by outward appearances compared to a true state of being chosen.”6

Mormon, who surely picked up on this theme in Alma’s and Amulek’s teachings, then wove in further references to clothing throughout the rest of the narrative about the Zoramites. For instance, after the poor class of Zoramites were expelled from Antionum, the people of Ammon took them in and “did clothe them” (Alma 35:9). At this point, the narrative tension is “reversed as the obedient and humble truly began to prosper in the land, while the proud and wicked began to lose their material blessings.”7

Later, during the war chapters in the book of Alma, Mormon reported that the wicked Zoramites had allied themselves with the Lamanites, who “were naked, save it were a skin which was girded about their loins” (Alma 43:20).8 Although the Zoramites themselves didn’t dress like the Lamanites, they were clearly linked with the army that had inferior battle attire. In contrast, the Nephites—and by inference, any of the poor Zoramites who joined their army—were prepared with “breastplates and with arm-shields, yea, and also shields to defend their heads, and also they were dressed with thick clothing” (v. 19). 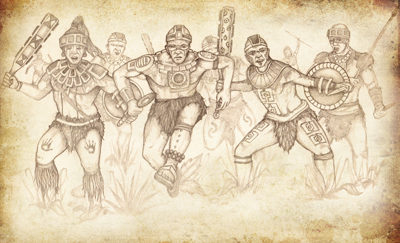 The war attire of the Zoramites and Lamanites was inferior to the armor of the Nephites. Image by Jody Livingston.

When the Nephites defeated the Lamanites in battle, the leader of the Lamanite army denied that God had intervened and instead attributed their loss merely to the outward superiority of the Nephite armor (see Alma 44:9). This reasoning is noticeably similar to the Zoramites’ perception that outward clothing was somehow a key factor in determining worthiness and righteousness.

Yet the Book of Mormon demonstrates that even after the Lamanites tried to copy the Nephite’s mode of armor, they still failed to attain a military advantage (see Alma 49:6–12).9 As Brady and Hopkin concluded, “The ferocious battle between the Nephites and Lamanites in Alma 43–44 provides a stunning array of contrasting images, ironies, and tensions based on the metaphor of clothing, all of which are resolved by the end of the story line.”10

This narrative demonstrates the tragedy that can befall any group that willfully removes itself from the true church of Christ and then replaces authorized worship with its own worldly priorities. It seems that the Zoramites may have initially separated themselves from the Nephites for political and social reasons.11 Yet what likely began as a movement to right perceived injustices ended up severing them from the “true fold of God” and from the “true vine,” which is Jesus Christ (1 Nephi 15:15).

Left to themselves, the Zoramites quickly perverted Lehi’s foundational teaching about the Lord blessing and prospering the righteous (see 2 Nephi 1:9).12 Instead of inward righteousness naturally yielding outward blessings, they assumed that outward appearances, wealth, and prestige could somehow yield inward righteousness, as well as God’s favor. This led to their gaudy apparel, self-promoting forms of worship, and exclusionary rituals.13 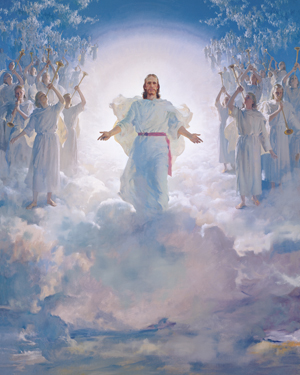 As modern societies increase in wealth and prosperity, they become susceptible to a similar preoccupation with riches, appearance, and materialism. Elder Joe J. Christensen taught, “Our prosperity brings some real challenges because many are getting rich, more of us are waxing fat, and as a result of greed, selfishness, and overindulgence, we could [like the Zoramites] lose the Spirit and literally kick ourselves out of the Church.”14

What is the solution to combat this growing tide of materialism? Alma taught the poor Zoramites, “it is well that ye are cast out of your synagogues” and that “because of your exceeding poverty… ye are necessarily brought to be humble” (Alma 32:12). Yet he emphasized that an even better solution than being compelled to be humble by outward circumstances is to freely choose humility and repentance because of an inward desire to follow Christ (v. 14). Amulek then affirmed that if they were truly righteous, “their garments [which were then coarse and unseemly] should be made white through the blood of the Lamb” (Alma 34:36).

Brady and Hopkin found that the “story of the poorly adorned Zoramites contrasts powerfully with that of their well-clothed brethren, whose tale ends in complete humiliation and failure steeped in bitter irony, while Mormon demonstrates that in the end the obedient will indeed prosper in the land.”15 The poor Zoramites were cared for and clothed by the people of Ammon, they were clothed in protective battle attire by Captain Moroni, and in the end they would be clothed in white garments by Jesus Christ. All those who similarly repent and humble themselves before the Lord will be similarly blessed, protected, and “clothed with purity, yea, even with the robe of righteousness” (2 Nephi 9:14).