Why Did Isaiah Prophesy of a Suffering Messiah? 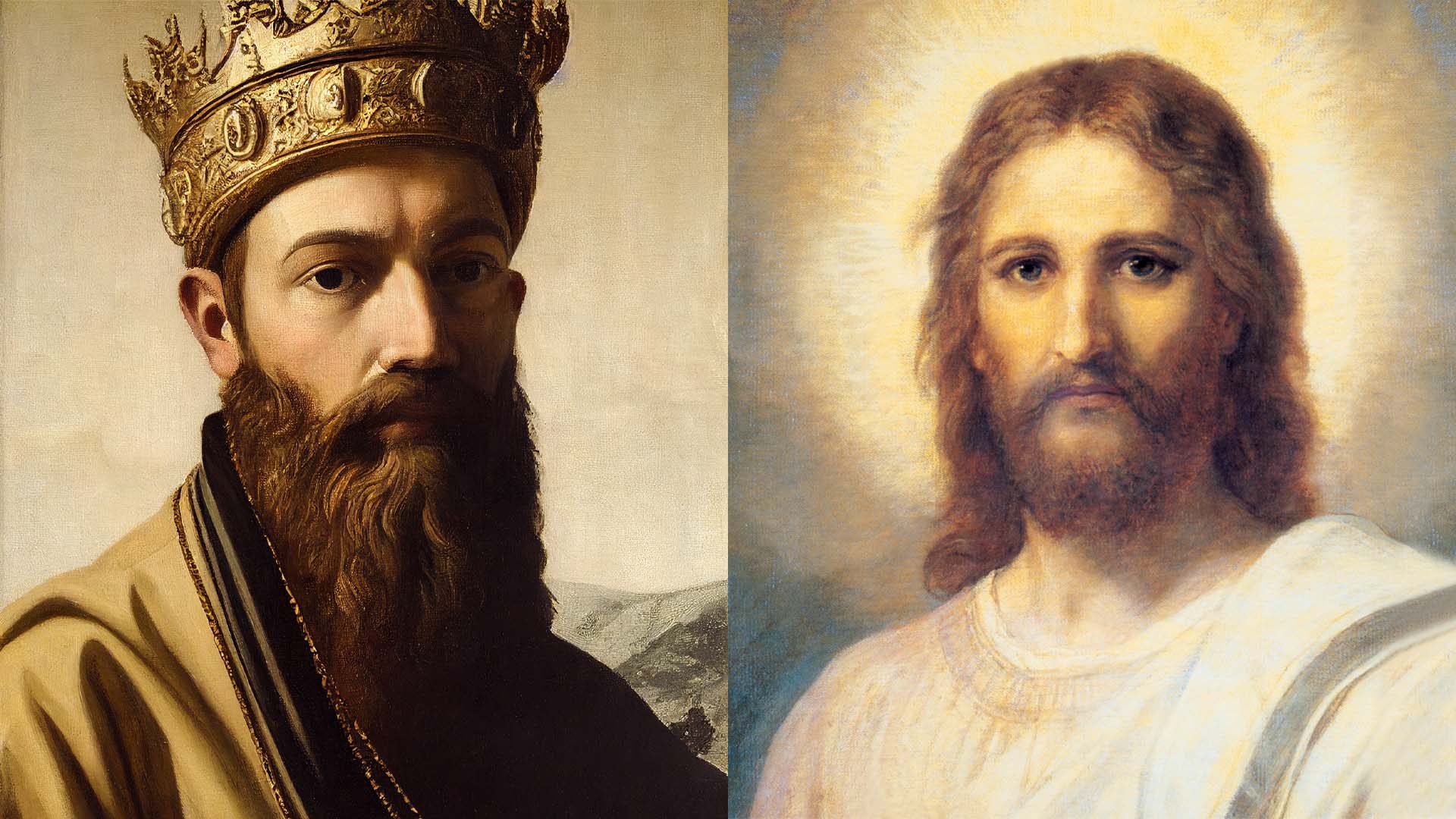 Left: Portrait of King Hezekiah generated by Midjourney. Right. Portrait of Jesus Christ by Heinrich Hofmann.
“Yet it pleased the Lord to bruise him; he hath put him to grief: when thou shalt make his soul an offering for sin, he shall see his seed, he shall prolong his days, and the pleasure of the Lord shall prosper in his hand.”

Few prophetic passages in the Old Testament rival Isaiah 53 (known as the Song of the Suffering Servant) in beauty, power, and enduring impact among devout Jews and Christians around the world. Naturally, given its importance to people of differing religious backgrounds, its meaning has been hotly contested through the centuries, and today scholars offer a wide variety of different interpretations for this inspiring text.1 In antiquity, however, both Christians and Jews understood this powerful prophecy to be about the Messiah, with Christians naturally applying it to Jesus of Nazareth.2

The Nephite prophet Abinadi likewise knew Isaiah 53 and read it messianically, using it to bolster his own prophecies of the coming of Christ (see Mosiah 14–16).3 Thus, Latter-day Saints today join with other Christians in recognizing Isaiah 53 as a powerful prophecy of the atoning sacrifice of Jesus Christ. Nonetheless, since revelations, including prophecies, are typically inspired by specific questions and circumstances,4 some have wondered just what inspired Isaiah’s vivid revelation of the future Messiah’s suffering, death, and ultimate triumph.

Scholars have posited a variety of theories about the origins of Isaiah 53. Some suggest it was inspired by “the intercession and suffering of certain prophetic figures.”5 Prophets such as Jeremiah (see Jeremiah 11:19) and Abinadi who suffered and even risked their lives for delivering the Lord’s message no doubt found personal resonance and solace in the poetically powerful description of a suffering servant in Isaiah 53.6

Others have proposed that the Suffering Servant was inspired by some calamity of a royal figure.7 In this vein, Margaret Barker has suggested that Isaiah 53 was inspired by Hezekiah’s miraculous recovery from being “sick unto death” during the Assyrian invasion around 701 BC (2 Kings 20:1–11; Isaiah 38:1–8, 21–22).8 Based on the description of his boil being treated by “a lump of figs” (2 Kings 20:7), Barker argues that Hezekiah had the plague, which was considered a “sign of divine wrath” in the ancient Near East.9 In such a context, Isaiah’s initial pronouncement that Hezekiah would “die, and not live” (Isaiah 38:1; 2 Kings 20:1) could be understood as meaning that Hezekiah had been cursed by God to die for some sin or transgression. That is to say, some would have perceived him as “stricken, smitten of God, and afflicted” (Isaiah 53:4).

But then Hezekiah “turned his face to the wall,” reminiscent of the people turning their faces away from the Suffering Servant (Isaiah 53:3),10 “and prayed unto the Lord,” rehearsing his righteous deeds and pleading with the Lord to spare his life (2 Kings 20:2–3; Isaiah 38:2–3). God then inspired Isaiah to return to Hezekiah and declare:

Thus saith the Lord, the God of David thy father, I have heard thy prayer, I have seen thy tears: behold, I will heal thee: on the third day thou shalt go up unto the house of the Lord. And I will add unto thy days fifteen years; and I will deliver thee and this city out of the hand of the king of Assyria; and I will defend this city for mine own sake, and for my servant David’s sake. (2 Kings 20:5–6; compare Isaiah 38:4–6)

The addition of fifteen years onto Hezekiah’s life is reminiscent of the promise that “he shall see his seed, he shall prolong his days, and the pleasure of the Lord shall prosper in his hand” (Isaiah 53:10). According to Josephus, an ancient Jewish historian, it was during these final fifteen years that Hezekiah’s son Manasseh, who would become the next king, was born.11

After recovering from his illness,12 Hezekiah went before the Lord at the temple and offered an intercessory prayer on behalf of the people (2 Kings 19:14–19; Isaiah 37:14–20). Then, according to the biblical account, “the angel of the Lord went out, and smote in the camp of the Assyrians,” forcing them to depart back to their homeland (2 Kings 19:35–36; Isaiah 37:36–37). Other biblical and historical sources suggest that the Lord may have sent a plague upon the Assyrian army.13 Thus, Hezekiah recovered from the deadly plague at the very time when it was decimating the Assyrian forces.

This timing, Barker interestingly argues, invited comparison between Hezekiah and the royal high priest figure of the Day of Atonement rituals, whom she argues symbolically bore the sins of the people and offered his life (symbolically through the sacrifice of a goat) to cleanse the people and the land.14 Thus, Hezekiah’s plague did not represent a curse for his own sins but rather the burden of the people’s sins (compare Isaiah 53:4–6), and his healing and recovery coinciding with the deliverance of the city symbolized their atonement and reconciliation: “Hezekiah took the people’s punishment on to himself, he withstood the wrath, and then deflected it to their enemies. The king recovered from his ordeal but the enemy did not.”15

This, Barker argues, inspired the original composition of Isaiah 53: “The original poem was probably written as a result of King Hezekiah’s recovery from the plague, which explains the historical details in it, but the overall theme is drawn from the Day of Atonement.”16

Barker’s theory is only one of many among scholarly attempts to explain the origins of Isaiah 53, and thus it should not be considered the definitive explanation of this powerful prophetic poem. Yet it is a theory that possesses some intriguing possibilities for Latter-day Saints and others to ponder carefully.

First, it is noteworthy that this interpretation dates the content of Isaiah 53 to the time of the original Isaiah of Jerusalem. Many scholars question or reject Isaiah as the author of the latter part of the book that bears his name (specifically, chapters 40–66), and argue that it was actually written by anonymous writers from the time of the Babylonian exile in the sixth century BC or even later.17 The Book of Mormon, however, indicates that several of these chapters—including Isaiah 53—were already on the plates of brass before the exile and attributes these writings explicitly to Isaiah.18

Barker’s theory on the origins of the Song of the Suffering Servant would thus agree with the presence of that text in the Book of Mormon (see Mosiah 14). Similarly, Gary V. Smith has also argued that several passages within the block of Isaiah 40–55 suggest that these prophecies were given by Isaiah around the time of the Assyrian invasion (ca. 701 BC).19 If Barker and Smith are correct, then much—and perhaps even all—of Isaiah 40–55 could well have been available to the Nephites on the plates of brass in some form and can thus be understood within the broader cultural and religious contexts of prophecies given in response to that crisis instigated by the Assyrian invasion.

Second, and more importantly, while the circumstances of Hezekiah’s recovery from the plague and the withdrawal of the Assyrian army may have motivated the writing of Isaiah 53, this does not necessarily mean it was ultimately about those events. King Hezekiah was merely a type and a shadow of Jesus Christ—the true Messiah and great high priest who was to come (see Hebrews 4:14). As Andrew C. Skinner explained, “Hezekiah was a Davidic king, anointed in similitude of the Anointed One. … He became Judah’s earthly deliverer and acted in similitude of the great Deliverer, Jesus Christ.”20

Some of Isaiah’s other messianic prophecies also received partial fulfillment through Hezekiah.21 Thus it is possible that Isaiah likewise saw a partial fulfillment of the Suffering Messiah’s role in Hezekiah’s suffering from the plague and being delivered from death along with his people (Isaiah 38:6). Nonetheless, only the Savior’s atoning sacrifice fully satisfied all that Isaiah had predicted of the future Messiah. For example, Latter-day Saint scholar Donald W. Parry has identified four key themes in Isaiah 53, each of which clearly applies to Jesus Christ:

As Kerry Muhlestein has also noted, “The image of the servant has other fulfillments. … The most important fulfillment, however, is Christ.”23 Only Jesus Christ truly “hath borne our griefs, and carried our sorrows,” and only Jesus Christ was truly “wounded for our transgressions” and “bruised for our iniquities.” And it is only through the Lord Jesus Christ’s suffering that we are healed (Isaiah 53:3–5). All other prophets, priests, and kings are to be seen as types and shadows that point very poignantly toward Him, our Heavenly King, and His great atoning sacrifice.