When Lehi’s Party Arrived in the Land, Did They Find Horses There? 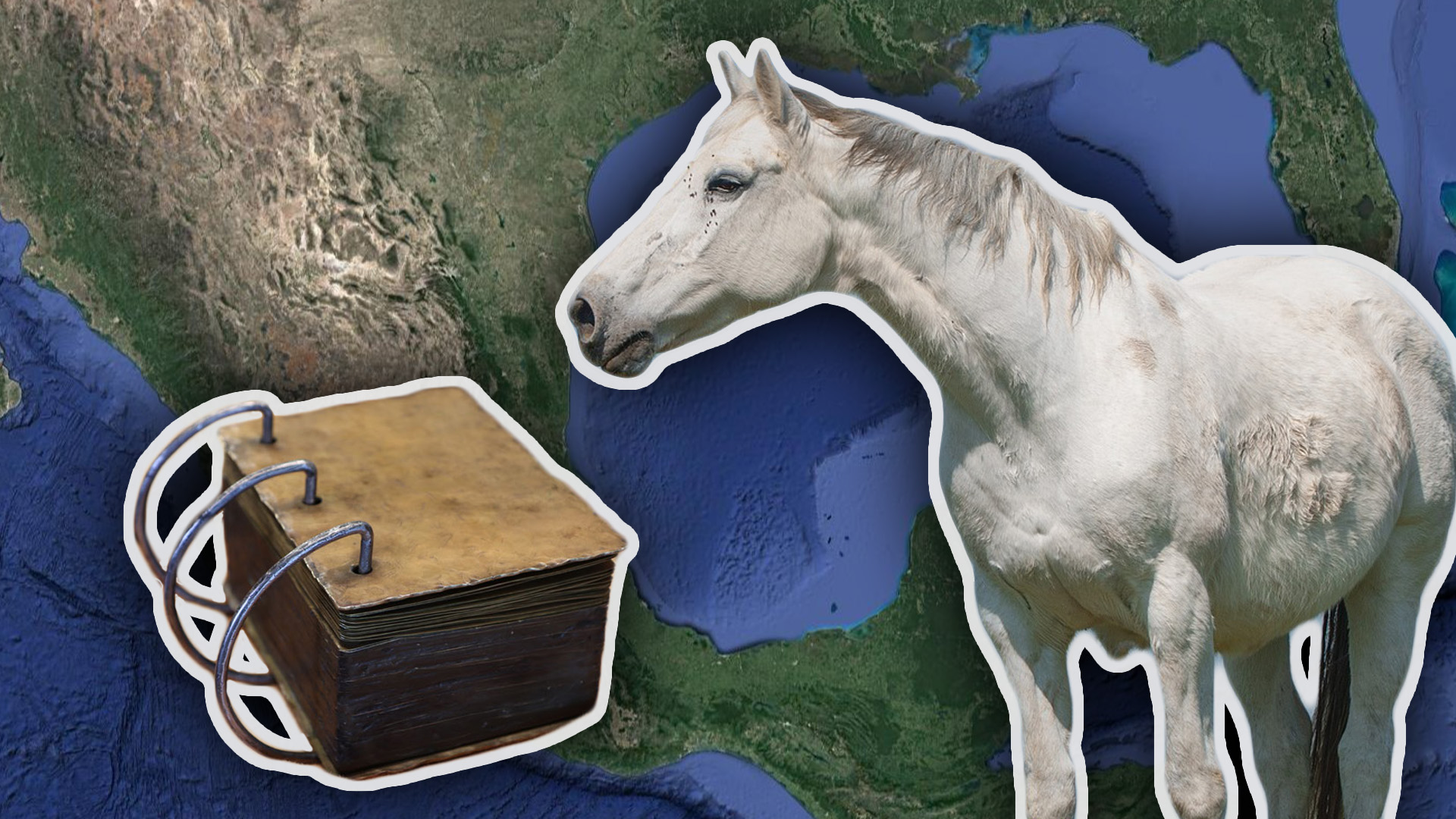 Image by Book of Mormon Central.
“And it came to pass that we did find upon the land of promise, as we journeyed in the wilderness, that there were beasts of the forests of every kind, both the cow and the ox, and the ass and the horse, and the goat and the wild goat, and all manner of wild animals, which were for the use of men.”

When Lehi and his family arrived in the promised land, according to Nephi’s account, they found “beasts in the forests of every kind, … the ass and the horse, … and all manner of wild animals” (1 Nephi 18:25). The inclusion of horses in the Book of Mormon is a subject that has long perplexed many readers since conventional thinking among scientists maintains that horses went extinct in the Americas around the end of the last Ice Age (ca. 10,000 BC). Some have used this apparent discrepancy to try to discredit the Book of Mormon. Others, however, have argued that various possibilities could account for it.1

For example, some have suggested that the use of the term “horse” is an instance of what scholars call “loanshifting” or “referential extension,” where a familiar word is applied to a foreign item or concept.2 This has happened frequently when new cultures encountered the horse in both the Old and New Worlds.3 Some scholars suggest something similar may have happened when Lehi’s family first explored the promised land—that is, they may have extended their term for “horse” to a new, unfamiliar species.4 Others have noted that translation sometimes introduces anachronisms into a text and so propose that words like “horse” may be a result of the Book of Mormon’s translation into English.5

While these remain important possibilities to consider, a recent study published in the Texas Journal of Science indicates that horses may have been in the Americas during Book of Mormon times after all.6 An international team of scholars—including experts in geology, biology, paleontology, and archaeozoology—recovered specimens of horse and other megafauna from a stratified context at Rancho Carabanchel, near Cedral, San Luis Potosí, Mexico. To establish the chronology of the site, several radiocarbon dates were obtained at each layer of strata from charcoal and other organic material recovered during excavations. Importantly, several horse specimens were recovered in close association with materials carbon dated to Book of Mormon times (see table).7

Based on the researchers’ analysis of the recovered horse specimens, all the samples from pre-Columbian, post-Pleistocene (Ice Age) contexts belong to either Equus mexicanus or Equus conversidens, both now extinct North American horse species. This rules out the possibility that these were actually Spanish horse bones that somehow contaminated the lower strata of the site. 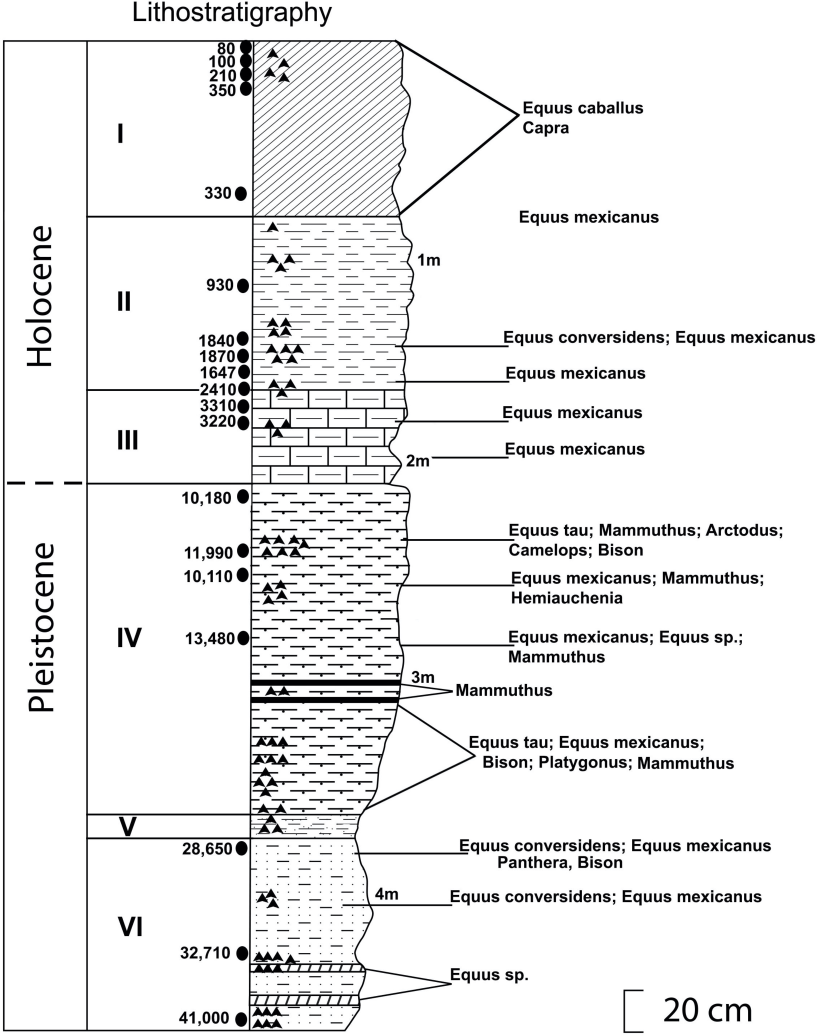 Fig. 3 in Miller et al. 2022, showing the stratigraphy and location of horse bones and radiocarbon dated material at Rancho Carabanchel

The authors of the study concluded: “The remains of Equus that we recovered from RC [Rancho Carabanchel] from multiple stratigraphic layers all with associated radiocarbon dates, all in a fair stratigraphic continuum (Fig. 3), and showing no mixing between geological units imply that horses may have persisted in this region of México well after the classical late Pleistocene extinction time.”8

Although this is incongruous with the commonly assumed date for the extinction of the horse in America, it is consistent with the traditions of several Indigenous groups which insist that their people had horses before the Spanish arrived.9 It is also part of a growing body of evidence that suggests that at least some pockets of horses survived for several millennia after the end of the last Ice Age.10 For instance, studies of ancient DNA samples from Alaska and the Yukon found horse DNA in permafrost layers from between 8600–5700 BC and 3700 BC, respectively.11 Further south, some horses in Brazil and Argentina apparently survived as late as 5000 BC.12

In Mesoamerica, scholars have long been perplexed by horse bones found in conjunction with ceramics in northern Yucatan.13 Charcoal found in association with some of these horse specimens was radiocarbon dated to ca. 1840 BC, and additional horse remains were found in later pre-Columbian strata.14 In the past, scholars have raised questions about the stratigraphy of the site, but recently one pair of archaeologists concluded that the possibility that the horse “survived into the Late Archaic or even Early Preclassic” should be taken more seriously: “Since the horse also survived into post-Pleistocene times in the Old World, the possibility of its survival into Archaic times in the American tropics may also need to be considered.”15 The most recent findings reported from Mexico further reinforce that possibility.

Establishing the survival of horse populations in the Americas well beyond the last Ice Age has major implications that would reverberate across several disciplines engaged in the study of pre-Columbian American history, “creating a paradigm shift,” as the authors of this latest study have acknowledged.16 Whether this latest evidence will bring about such a shift is yet to be seen, but the scientists who published it have urged others to treat the possibility “as a developing hypothesis, which is testable rather than just avoided.”17

Two of the radiocarbon dates found near horse remains came from the mid-second millennium BC, thereby supporting the reference to horses during Jaredite times in Ether 9:19.18 Another dates to the sixth or fifth century BC, which is chronologically close to Lehi’s arrival in the promised land, when Nephi said he saw horses there (1 Nephi 18:25), and to Enos’ time when the Nephites had “many horses” (Enos 1:21). The final mention of horses in the Book of Mormon comes during the Gadianton siege in the first century AD (3 Nephi 3:22; 4:4; 6:1), and two radiocarbon dates support the presence of horses around this time as well. Thus, if these findings are valid, they support the existence of horses in all periods the Book of Mormon mentions them in.19

Additionally, it may be significant that two different types of Equus species were found in strata dating to Book of Mormon times since the Book of Mormon also mentions the ass (donkey), which is likewise a member of the so-called horse family (Equidae). Since the E. coversidens is a small- to medium-sized horse, perhaps it is what the Jaredites and Nephites referred to as an ass,20 while the larger E. mexicanus was their horse. The findings at Rancho Carabanchel may therefore help account for not one, but two animals mentioned in the Book of Mormon.

As scientists and scholars continue to explore and debate this issue, students of the Book of Mormon should remain open to various explanations for references to horses and other Old World animals mentioned in Jaredite and Nephite records. These recent findings once again illustrate why it is important to remain patient and open-minded as archaeology continues to unfold the past rather than jump to hasty conclusions based on a mere lack of evidence. The potential discovery of pre-Columbian horses during Book of Mormon times is but a single data point in a much larger trend toward confirming things once thought to be anachronous in the Book of Mormon.21

“In scholarship as in science,” Hugh Nibley once observed, “every paradox and anomaly is really a broad hint that new knowledge is awaiting us if we will only go after it.”22 Those who have had the patience to approach the Book of Mormon’s reference to horses as just such a broad hint are now enjoying new knowledge that may be on the verge of rewriting the history of the Americas.