How Did Isaiah Prophesy of the Savior? 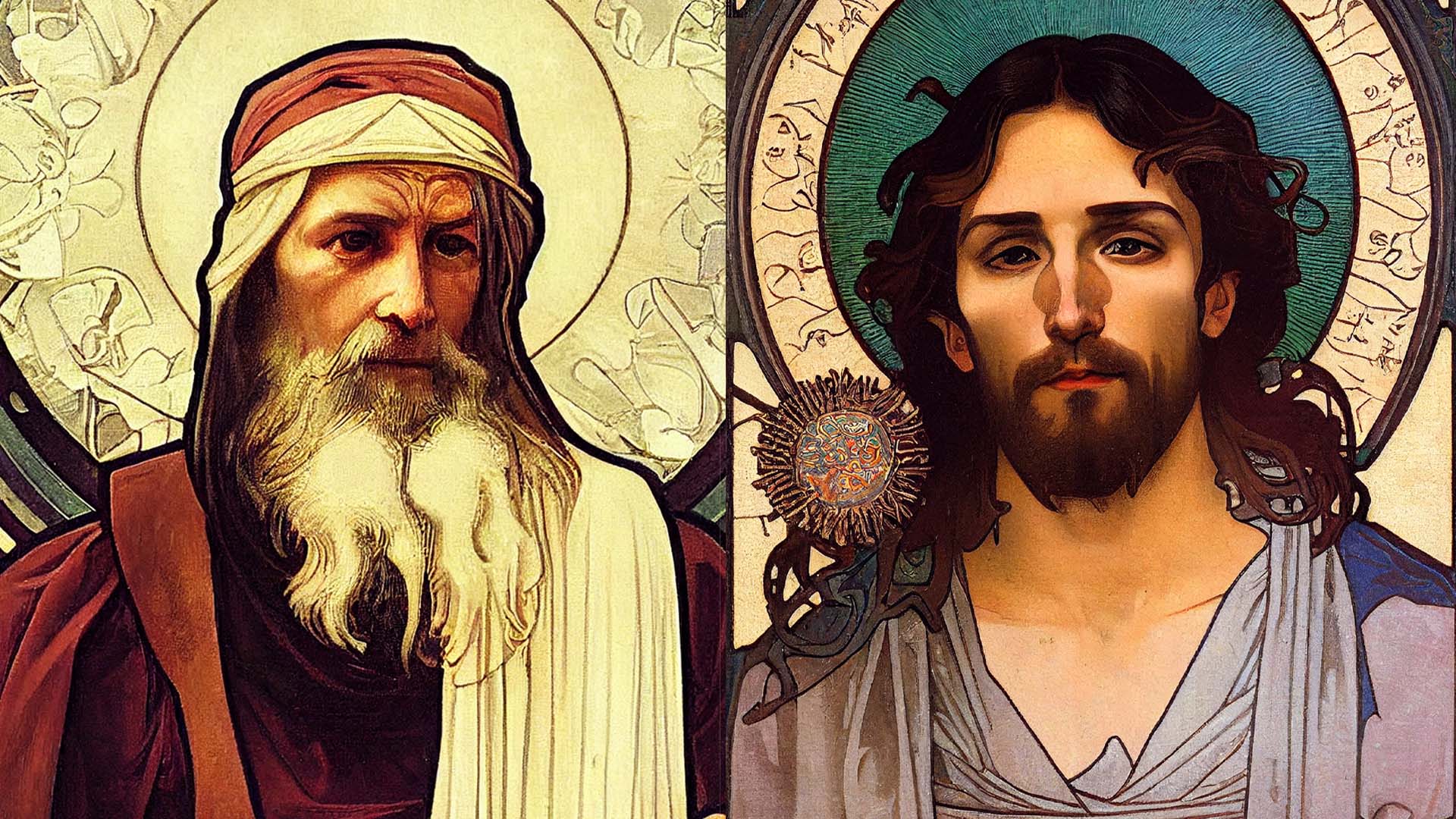 Portrait of Isaiah and Jesus Christ. Images generated by Midjourney.
“The voice of him that crieth in the wilderness, Prepare ye the way of the Lord, make straight in the desert a highway for our God.”

Historically, many interpretations have been offered for the writings of Isaiah, but Christian audiences—including Latter-day Saints—have traditionally seen in Isaiah’s prophecies a vision of the coming Messiah, identified as Jesus Christ. Many of Isaiah’s prophecies have referents and fulfilments within the prophet’s own lifetime, but since antiquity, his words have also been seen as pointing ahead to a further fulfilment through the Messiah.

The earliest prophetic commentary on Isaiah in Latter-day Saint scripture was written by Nephi in the sixth century BC. He explained, “I, Nephi, write more of the words of Isaiah, for my soul delighteth in his words … for he verily saw my Redeemer, even as I have seen him” (2 Nephi 11:2). Nephi purposefully used Isaiah’s words to “more fully persuade [his people] to believe in the Lord their Redeemer” (1 Nephi 19:23).1

During and after His mortal ministry, Jesus Christ likewise interpreted Isaiah’s prophecies as pointing to Him (see Luke 4:16–30), an understanding that continued in the early Christian Church (see Acts 8:26–40). Regarding the use of Isaiah in the New Testament, Latter-day Saint scholar Donald W. Parry notes:

The Apostles and gospel writers Peter, Matthew, Luke, John, and Paul recorded the fulfillment of many of Isaiah’s prophecies that pertained to Jesus Christ. By citing Isaiah’s prophecies of the mortal Messiah, these writers demonstrated that Jesus was indeed the promised Messiah, of whom Isaiah had prophesied seven centuries earlier. So vital are Isaiah’s Messianic prophecies that even Jesus Christ Himself cited this Old Testament prophet and then declared that the prophecies were fulfilled in Him (see Matt. 13:13–15).2

As an expert on Isaiah, Parry has composed a helpful chart of Isaiah’s prophecies that are cited in the New Testament as being fulfilled in the life and ministry of Jesus Christ. The following five are just a few of the many examples illustrative of the deep Christological themes found in Isaiah’s writings:

In Isaiah 9:6–7, Isaiah prophesies that “unto us a child is born, unto us a son is given” (Isaiah 9:6). This child is given divine names related to his role, and it is promised that he would rule in peace over the children of Israel.3 Many commentators, including Latter-day Saint commentators, have noted how this prophecy may have had multiple fulfilments. Much closer to Isaiah’s contemporary audience, the righteous king Hezekiah was born and, upon his coronation, would have been declared to be God’s son (see Psalm 2:7; 2 Samuel 7:12–16).4

However, many of the details about this promised son “more naturally identify the Messiah.”5 Without disregarding Hezekiah as a fulfilment of the prophecy, these verses seem to also point to “the true Davidic King with an eternal reign in an infinite kingdom.”6

In the concluding verses of Isaiah 22, Isaiah offers a prophecy for a man named Eliakim, declaring, “I will clothe him with thy robe, … and I will commit thy government into his hand. … And the key of the house of David will I lay upon his shoulder” (vv. 21–22). While referring immediately to Eliakim, such royal imagery also typifies Christ, the Davidic King. Parry has noted, for instance, that the “Messiah would [likewise] hold the key of David” and the sealing power.7

Thus, rather than competing with Christ, Eliakim himself can be seen as a type of Christ. Kerry Muhlestein concluded that “The more we understand Eliakim, the immediate context of this prophecy, the more we will understand what Isaiah is trying to teach us about Christ in this prophecy.”8 Another example of shared imagery comes from Isaiah’s prediction that Eliakim would become a “nail in a sure place” to bring honor to his family (Isaiah 22:23). In like manner, “Christ, by being nailed to the cross, can bring unalterable honor to His Father and to all of us.”9

Isaiah 25 contains a prophecy that the Lord would “swallow up death in victory” and that His people would again enjoy His presence (Isaiah 25:6–12).10 While God has comforted His people and saved them from harm in the past, “the greatest fulfillment of this is Christ’s victory over the grave, gained through His death and Resurrection.”11 Because “Christ victoriously overcame death at his resurrection,” it is now possible—through Christ—“for us to swallow up death in victory.”12

Isaiah prophesied of one who “crieth in the wilderness, Prepare ye the way of the Lord, make straight in the desert a highway for our God” (Isaiah 40:3).13 These words are repeated by John the Baptist in all four Gospel accounts, clearly connecting John with the fulfilment of this prophecy.14 Lehi also prophesied that John the Baptist—identified as “a prophet who should come before the Messiah”—would declare these words from Isaiah (1 Nephi 10:7–8). Many scholars have commented on the clear prophetic foreknowledge reflected in this passage.15

In Isaiah 6:1–3, Isaiah describes how “Christ would be anointed to preach good tidings and to open the prison” of death.16 In the Gospel of Luke, this prophecy is connected to Christ by Jesus Himself. In Luke 4:17–21, Jesus read these words and identified Himself as the one from whom ultimate rest would come.17

It is possible that multiple interpretations of Isaiah’s prophecies exist since many of them have multiple fulfilments, some of which precede and point to the greater fulfilment in Jesus. Elder Jeffrey R. Holland taught this principle when he said:

It is, of course, important to remember that many of Isaiah’s prophecies can be or have been or will be fulfilled in more than one way and in more than one dispensation. Obviously, we have material in Isaiah’s writings that applies to a whole range of experiences, including that of the premortal Christ, of his first mortal advent in the meridian of time, and of his Second Coming in the latter days.18

With this in mind, readers of Isaiah need not be concerned when they learn of earlier prophetic fulfilments closer to Isaiah’s time. Such interpretations, even when valid, don’t necessarily conflict with what Elder Holland called Isaiah’s “messianic preoccupation.”19 Indeed, “It would seem … that Isaiah was prepared from birth—and of course we would say from before birth—to testify of the Messiah and bear such witness of the divinity of Christ’s coming.”20

Jesus Christ declared that the scriptures testify of Him, His life, and His atoning sacrifice (see John 5:39). This is especially true of Isaiah’s writings. Through his prophecies, we understand that “a virgin shall conceive, and bear a son, and shall call his name Immanuel” (Isaiah 7:14; cf. Matthew 1:22–23);21 a son who would “be called Wonderful, Counsellor, The mighty God, The everlasting Father, The Prince of Peace.”22 He would be “a sanctuary” for His people and “a stone of stumbling” for those who would reject Him.23

Powerfully, Isaiah also witnesses that Jesus Christ was “despised and rejected of men; a man of sorrows, and acquainted with grief,” one who “hath borne our griefs, and carried our sorrows” (Isaiah 53:3–4). Through this sacrifice, Christ “was wounded for our transgressions, he was bruised for our iniquities: the chastisement of our peace was upon him; and with his stripes we are healed.”24

It is little wonder, then, that Jesus would declare, “Great are the words of Isaiah.” Nor is it surprising that He would instruct His disciples to “search these things diligently” (3 Nephi 23:1), for to read Isaiah is to read of Jesus Christ and His messianic mission. Of all possible interpretations of Isaiah’s writings, those which accurately foreshadow the identity, divinity, and reality of Jesus are surely of greatest worth.

Jeffrey R. Holland, “‘More Fully Persuaded’: Isaiah's Witness of Christ's Ministry,” in Isaiah in the Book of Mormon, ed. Donald W. Parry and John W. Welch (Provo, UT: Foundation for Ancient Research and Mormon Studies, 1998), 1–18, together with several other chapters in this volume.