Book of Mormon Central / KnoWhys
Why Was Doctrine and Covenants Section 88 Quoted in Section 109? 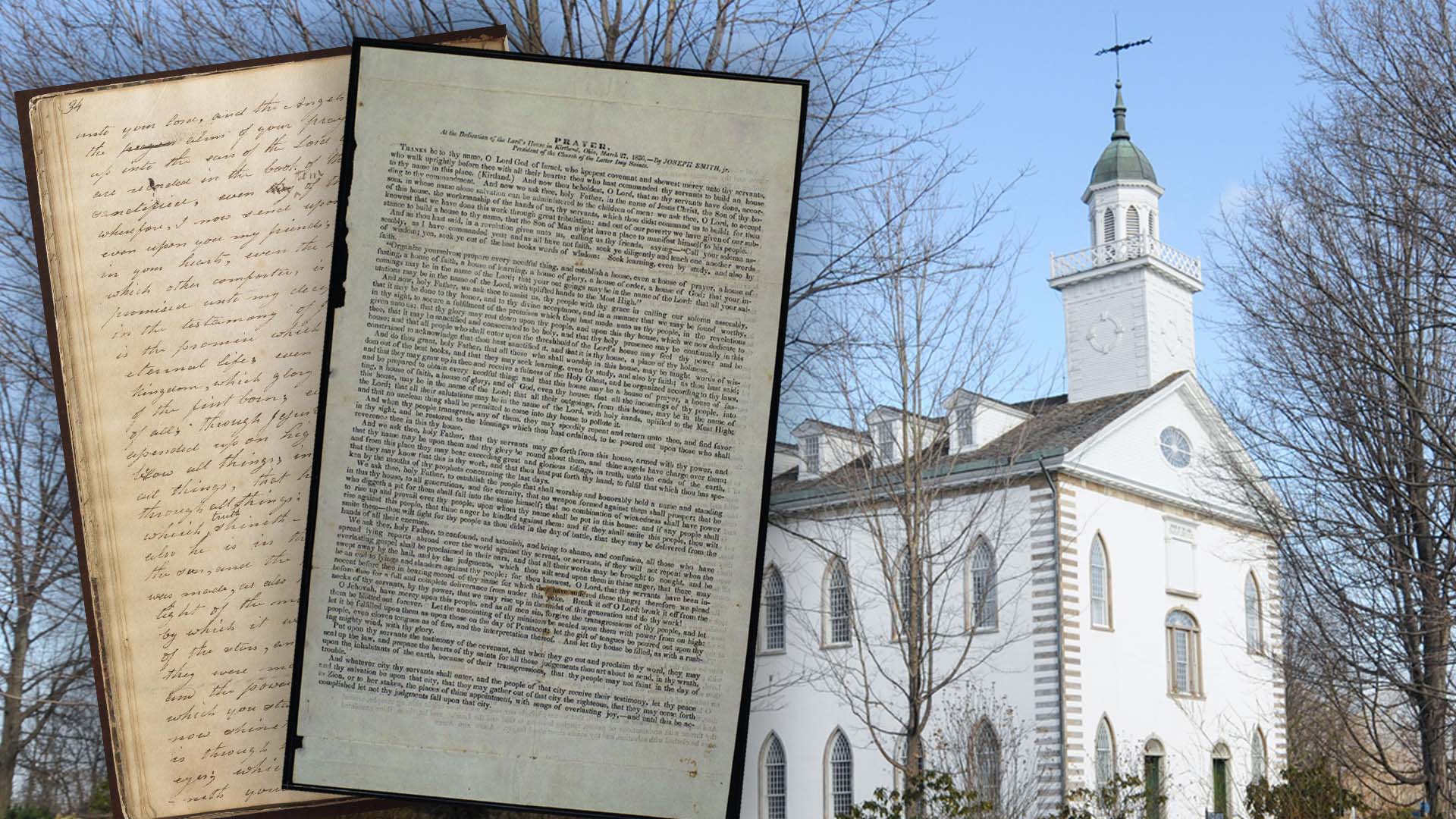 Doctrine and Covenants 88 and 109 via The Joseph Smith Papers. Image of the Kirtland Temple via Kenneth Mays
“And as thou hast said in a revelation, given to us, calling us thy friends, saying—Call your solemn assembly, as I have commanded you.”

Doctrine and Covenants 88, sometimes called “The Olive Leaf,” is one of Joseph Smith’s most eloquent and expansive revelations. It opens with eternal vistas on multiple topics: Jesus Christ, the light of the universe (88:1–13);1 degrees of glory and divine perspectives on the relativity of laws within kingdoms (88:36–61); and how God’s Spirit will be poured out upon all the faithful who sincerely ask (88:62–68). Following that soul-stretching introduction, the Lord asks His people to remember God’s ultimate promises and invites them to come together in solemn, sanctifying assemblies (88:69–75).

In January 1831, years before Joseph received that revelation, the Lord commanded the Saints to go to Ohio, where they would be given the “law; and there you shall be endowed with power from on high” (D&C 38:32). Two years later, in January 1833, it was time to take the next step to receiving that promised blessing by building a house of the Lord in Kirtland.2 In delivering D&C 88 to the Saints, Joseph called it “the Lord’s message of peace to us.”3 This revelation gave assurance that the Lord was pleased with the efforts of His faithful Saints. The purpose of the temple, still today, is to direct us into the presence of the Lord and to help us become at peace with Him.

To construct the temple, much physical work needed to be done: stones needed to be cut, lumber milled, windows framed, and floor-to-ceiling curtains hung.4 At that same time, extensive spiritual preparations were needed. As a key step in preparing the Church for the dedication of the Kirtland Temple, the School of the Prophets was created based on the instructions given in D&C 88:77–80:

77 And I give unto you a commandment that you shall teach one another the doctrine of the kingdom.

78 Teach ye diligently and my grace shall attend you, that you may be instructed more perfectly in theory, in principle, in doctrine, in the law of the gospel, in all things that pertain unto the kingdom of God, that are expedient for you to understand;

80 That ye may be prepared in all things when I shall send you again to magnify the calling whereunto I have called you, and the mission with which I have commissioned you.

Continuing on in D&C 88:117–126, even further instructions for this important educational training experience were given. (The words in bold italics are quoted in D&C 109:6–9 and are then repeated in D&C 109:16–19, as discussed below.)

117 Therefore, verily I say unto you, my friends, call your solemn assembly, as I have commanded you.

122 Appoint among yourselves a teacher, and let not all be spokesmen at once; but let one speak at a time and let all listen unto his sayings, that when all have spoken that all may be edified of all, and that every man may have an equal privilege.

123 See that ye love one another; cease to be covetous; learn to impart one to another as the gospel requires.

124 Cease to be idle; cease to be unclean [see 109:20]; cease to find fault one with another; cease to sleep longer than is needful; retire to thy bed early, that ye may not be weary; arise early, that your bodies and your minds may be invigorated.

125 And above all things, clothe yourselves with the bond of charity, as with a mantle, which is the bond of perfectness and peace.

126 Pray always, that ye may not faint, until I come. Behold, and lo, I will come quickly, and receive you unto myself. Amen.

As an excerpt from this long revelation, the entire second block of verses above, D&C 88:117–126, was published in the February 1833 issue of the Evening and the Morning Star.5 That impressive text served pedagogically as the mission statement for the School of the Prophets, and together with the remaining verses at the end of this long revelation (vv. 127–137), all of these inspired directives were used as the “school rules” for the conduct of students and teachers alike in the School of the Prophets.

The first edition of the Doctrine and Covenants was published on September 24, 1835. In it, what is now D&C 88:1–137 was included along with four additional verses (now verses 138–141). The perceived importance of this revelation to the Saints at that time is reflected in its position in that volume as the seventh revelation. It thus stood near the head of the one hundred revelations contained in that edition.

Printed copies of the book of scripture became available by the end of 1835—in time for the commencement, in January 1836, of all-night sessions in preparation for the dedication of the Kirtland Temple on March 27 and April 3, 1836.

That was when the dedicatory prayer, now D&C 109, was given in a pair of repeated dedicatory services. Those sessions filled the temple to overflowing—on both the main floor and in the assembly hall above. Based on the number of people known to have been crowded into the building, one modern structural engineer has wondered why the upper floor did not collapse onto the hundreds of people below. The construction was not designed to bear that kind of weight.

The magnificent manifestations of Pentecost-like spiritual powers and the appearances of Jesus Christ, Elias, Moses, and Elijah were testified of immediately and by many who were in attendance.6 Those miraculous experiences were, no doubt, inspired and triggered by the words of what is now D&C 109. That canonized prayer began by giving thanks and by attesting to the enormous sacrifices that had been made to present unto the Lord the building.

The prayer also began by rehearsing words (bolded and italicized) from D&C 88:117–120 which had been given by the Lord more than three years earlier:

6 And as thou hast said in a revelation, given to us, calling us thy friends, saying—Call your solemn assembly, as I have commanded you;

7 And as all have not faith, seek ye diligently and teach one another words of wisdom; yea, seek ye out of the best books words of wisdom, seek learning even by study and also by faith;

Then, after praying that the glory of the Holy Father would “rest down upon thy people” and that His “holy presence may be continually in this house” (D&C 109:12), the dedicatory prayer went on to petition the Lord that the temple would empower worshippers to go forth honorably and with divine power (vv. 14–23), revisiting once again several words and phrases from D&C 38:32 and 88:117, 119, 120, and 124, as follows:

14 And do thou grant, Holy Father, that all those who shall worship in this house may be taught words of wisdom out of the best books [inversely quoted from 88:117], and that they may seek learning even by study, and also by faith [88:117], as thou hast said;

15 And that they may grow up in thee, and receive a fulness of the Holy Ghost, and be organized according to thy laws, and be prepared to obtain every needful thing [88:119];

17 That all the incomings of thy people, into this house, may be in the name of the Lord;

18 That all their outgoings from this house may be in the name of the Lord;

19 And that all their salutations may be in the name of the Lord, with holy hands, uplifted to the Most High [88:120];

20 And that no unclean [88:124] thing shall be permitted to come into thy house to pollute it;

21 And when thy people transgress, any of them, they may speedily repent and return unto thee, and find favor in thy sight, and be restored to the blessings which thou hast ordained to be poured out upon those who shall reverence thee in thy house. (D&C 109:14–21)

These blocks of text near the beginning of D&C 109 first report to the Lord precisely what had been done to fulfill the commands that He had given in D&C 88. The prayer then petitions that all who come to worship in the Lord’s house will be blessed in all the ways the Lord had promised in D&C 88. D&C 88 and 109 are thus connected, but they serve different purposes. The one begins the process, and the other marks the completion of that process.

Similarly related developments further connect these two revelatory pronouncements. For example, on the one hand, in December 1832, D&C 88 had featured a long section of warnings from the Lord, while in 1836, D&C 109 featured the Lord’s glory. Thus, the central part of D&C 88 (verses 87–117) focuses extensively on warnings that will be given to the outside world when seven trumpets sound as Jesus Christ comes and overcomes death and Satan.

The word “warn” appears five times in D&C 88 but only once in D&C 109, and nothing is said in that dedicatory prayer about the apocalyptic trumpets ominously sounding to the Gentiles abroad. Instead and in fulfilling contrast, the dedicatory prayer turns its attention inwardly toward God, inside this house of the Lord and within its walls of blessings and glory. There, ultimately, 10 attributes of God are reverently revered, namely His glory, honor, power, majesty, might, dominion, truth, justice, judgment, and mercy. Here Saints extol the “infinity of fulness, from everlasting to everlasting” (D&C 109:77). Here the anointed ones are “clothed with salvation” and will “shout aloud for joy” (v. 80).

In D&C 109, three divine titles—“God,” “Holy Father,” and “Lord”—each appear exactly seven times. That number of ominous finality occurs in reference to the seven trumpets in D&C 88. It then affirms the presentation of the orderly and dedicated completion of the temple building. While the words “God,” “Father,” and “Lord” appear often in D&C 88 (33, 3, and 19 times, respectively), there they had appeared a random number of times.

Other verbal comparisons and continuities between these two texts reinforce these revelations as bookends. In D&C 88, the hopeful quest to seek the “face” and to see the “countenance” of the Lord is mentioned eight times. Then, in D&C 109, the lone mention of the word “face” comes in connection with God actually turning away His wrath when the people repent. He then graciously looks “upon the face of thine Anointed” and will be merciful (v. 53). The quest that was the focus in D&C 88 has reached its conclusion in D&C 109.

In D&C 88 and 109, the “Holy Spirit” and “the Holy Ghost” are mentioned only twice and once, respectively. And while the words “holy” and “holiness” never appear in D&C 88, they appear frequently in the holy dedicatory moment in D&C 109, specifically 13 times and 1 time, respectively.

While there are definitely differences between these two sections in the Doctrine and Covenants, certain words actually appear precisely an equal numbers of times in each. These shared elements solidify their interdependency and interrelatedness, the one as a beginning and the other, an ending. These words include:

Prayer is always important, and that word happens to appear, significantly, seven times in D&C 88. On the occasion of the solemn dedication, various words for praying appear exactly twice as often, a total of fourteen times in D&C 109—namely “prayer” (2x), “ask” (9x), “beseech” (1x), and “petitions” (2x) for a total of 14. “Amen” appears four times in D&C 88, while it appears half as often (twice) in D&C 109.

In sum, many factors help us to answer the question “Why is Section 88 quoted in Section 109?”

In the life and times of the 1830s, these two sections worked together hand-in-glove. Here and now, two centuries later, as well as into eternity, let them not be separated, whether by unawareness, inadvertence, indifference, or ingratitude.