Book of Mormon Central / KnoWhys
Why Does the Book of Mosiah Refer to the Exodus Narrative? 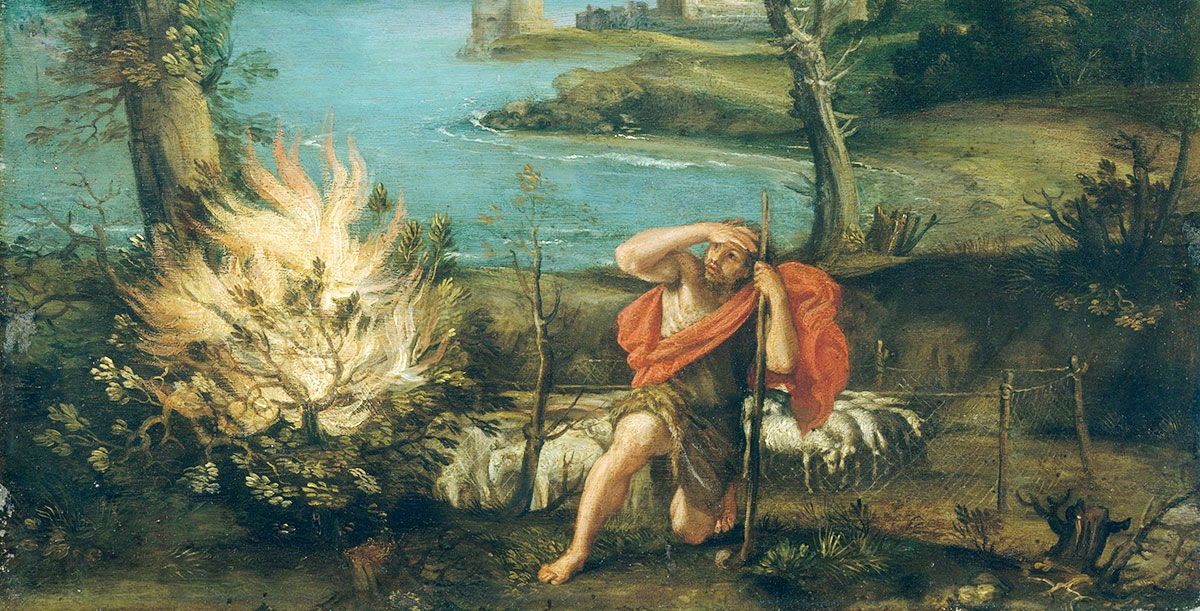 Landscape with Moses and the Burning Bush by Domenico Zampieri via The Met
“Who is the Lord, that shall bring upon my people such great affliction?”

In Mosiah 11:27, King Noah asks, “Who is Abinadi, that I and my people should be judged of him, or who is the Lord, that shall bring upon my people such great affliction?” This question, “who is the Lord” may be familiar to readers of the Old Testament, because it is basically the same question the Pharaoh asked in Exodus 5:2: “Who is the Lord, that I should obey his voice to let Israel go?” This similarity prompted one researcher, Sara Riley, to spend personal scripture study time looking for other similarities between these two stories.1 She discovered that the Abinadi and Alma narratives in Mosiah often allude to the Exodus narrative.

One type of connection she found between these two narratives is at a broad relational level. For example,

By themselves, these general details may mean little, but Mosiah explicitly references specific details found in the Exodus as well. Mosiah 13:5, for example, states that Abinadi’s face, “shone with exceeding luster, even as Moses’ did while in the mount of Sinai, while speaking with the Lord.”8 Mosiah 12:33 similarly states, “But now Abinadi said unto them: I know if ye keep the commandments of God ye shall be saved; yea, if ye keep the commandments which the Lord delivered unto Moses in the mount of Sinai.”9 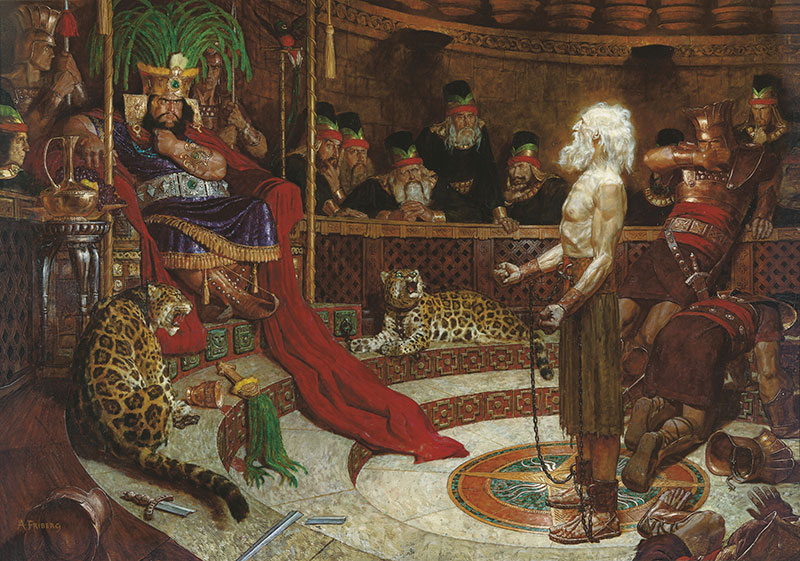 Other more specific details relate to the relationship between King Noah and Pharaoh, one of which is that neither king followed after an earlier righteous role model. Mosiah 11:1 states that King Noah did not walk in the ways of his father while Exodus 1:8 states that “there arose up a new king over Egypt, which knew not Joseph.”10 In the Book of Mormon, King Noah hardened his heart (Mosiah 11:29), just as Pharaoh’s heart was hardened (Exodus 9:12, 34–35). King Noah was even paranoid of Alma creating an uprising (Mosiah 18:33), just like Pharaoh was afraid of the people creating an army (Exodus 1:10).11

The book of Mosiah sometimes even uses almost the same language as Exodus to describe the Nephites. Mosiah 11:22 states that the Nephites “shall know that I am the Lord their God, and am a jealous God, visiting the iniquities of my people,” while Exodus 20:5 states, “I the Lord thy God am a jealous God, visiting the iniquity of the fathers upon the children unto the third and fourth generation of them that hate me.”12 The Lord commanded Abinadi, “Stretch forth thy hand” (Mosiah 12:2), and the Lord commanded Moses “stretch forth thy hand” on multiple occasions to afflict Egypt.13 Similarly, the Lord stated that both King Noah and the Egyptians “shall know that I am the Lord” (Mosiah 12:3, Exodus 7:5).14

One finds even more similarities as one continues reading through Abinadi’s initial speech. In Mosiah 12:4–8Abinadi prophesied hail, the east wind, pestilence, insects to devour grain, sore afflictions, and utter destruction, and in Exodus, Moses sent plagues, including hail, the east wind, locusts, boils, and the death of the firstborn.15

The similarities extend into the description of Alma as well. Mosiah 17:1 introduces Alma by stating that he was a “young man,” and Exodus 33:11 introduces Joshua the same way. In addition, both Alma and Joshua wrote down the words of their predecessors. Mosiah 17:4 states that Alma, “being concealed for many days did write all the words which Abinadi had spoken.” Joshua 24:26 similarly states that Joshua wrote Moses’ words.16

In addition, Joshua helped bring the children of Israel across the Jordan and began to set up the lands of their inheritance in Israel. Alma also brought the people safely to the land of Zarahemla and began to set up churches in the land.17 However, even though Alma is compared to Joshua in the sense that he was Abinadi’s successor like Joshua was Moses’s successor, Alma is sometimes compared to Moses as well.18

In Mosiah 18, for example, Alma gathered his people to a place called the Waters of Mormon. This scene is similar to Exodus 15 when Moses and the Israelites arrive at the waters of Marah. One of the first similarities between the stories is the name itself. The Syriac translation of Exodus 15 shows that Mara was likely pronounced as “Mora,” which is similar to the first half of the name Mormon. This detail acts as another clue tying these two narratives together.19 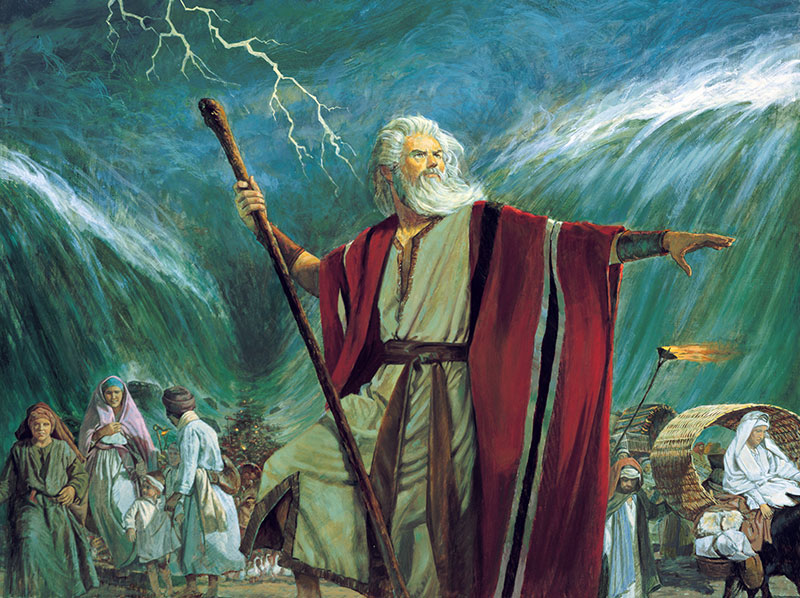 A surprising similarity is that, in both narratives, the people are saved by trees. In Exodus, Moses made the water potable by putting a tree into it, while the Nephites were similarly saved by the trees that hid them from King Noah’s armies.22 More significantly, both Alma’s people and the Israelites make covenants at these places. Even the name of a nearby place is significant. In Exodus 15:27, just after leaving Marah, the Israelites find a place called Elim. The name of the first person Alma baptizes is Helam (Mosiah 18:12), which is a surprisingly similar name. In Mosiah 27:17, the name was originally misspelled as Helim, making the two names even closer together.23 Even mentioning Helam is unusual, as he is not a critical character to the story, but his name may have been mentioned to make sure the reader made the connection.

In addition, Alma organizes one priest to every fifty like Moses did, they both instruct the people regarding the Sabbath, labor, charity, social conduct and administration, they both multiply & prosper, both Alma and Moses encourage the people to “fear not,” and the Lord hears the Nephites and Israelite’s cries.24

This poses the question: How does this change how we understand these narratives in the Mosiah? One theme that rises to the surface is the covenant relationship between God and His people. Because this is an eternal relationship, God can deliver His covenant people in any time and place, just like He delivered the children of Israel.25 Seeing details of the deliverance story from the book of Exodus play out again in the book of Mosiah can help readers trust that God can similarly deliver them from their own trials and difficulties.

However, there may be another reason as well. As Sara Riley puts it, “We know that the Book of Mormon is another testament of Jesus Christ, and I believe that the most important reason the Exodus narrative was incorporated was to teach of Christ. The Exodus and Moses were seen as types and shadows of Christ.”26 As Abinadi stated, “But behold, I say unto you, that all these things were types of things to come” (Mosiah 13:31). Christ also said, “Behold, I am he of whom Moses spake, saying: A prophet shall the Lord your God raise up unto you of your brethren, like unto me” (3 Nephi 20:23). These allusions remind us all of Christ’s power to deliver us in times of need, just as God delivered his ancient people in the books of Exodus and Mosiah from captivity and servitude.27

As S. Kent Brown has said,

All of the words describing Israel’s bondage derive from the root ‘bd. It is also a noun from this same root which is translated “servant” in Isaiah 53, which Abinadi had quoted at length and then immediately linked to Jesus’ ministry. What is clear here is that Jesus is the expected servant (‘ebed) who, by paying the price of redemption, frees all those who will follow him from bondage (‘abodah), the very term used in the Exodus account.28

Sara Riley, “‘Even as Moses’ Did’: The Use of the Exodus Narrative in Mosiah 11–18,” FairMormon presentation, 2018, online at fairmormon.org. 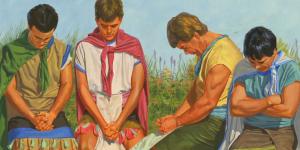 Why New Testament Words and Phrases Are in the Book of Mormon Part 7: How Often Did These Commonalities Come through the Hand of Mormon or Moroni?
October 24, 2019