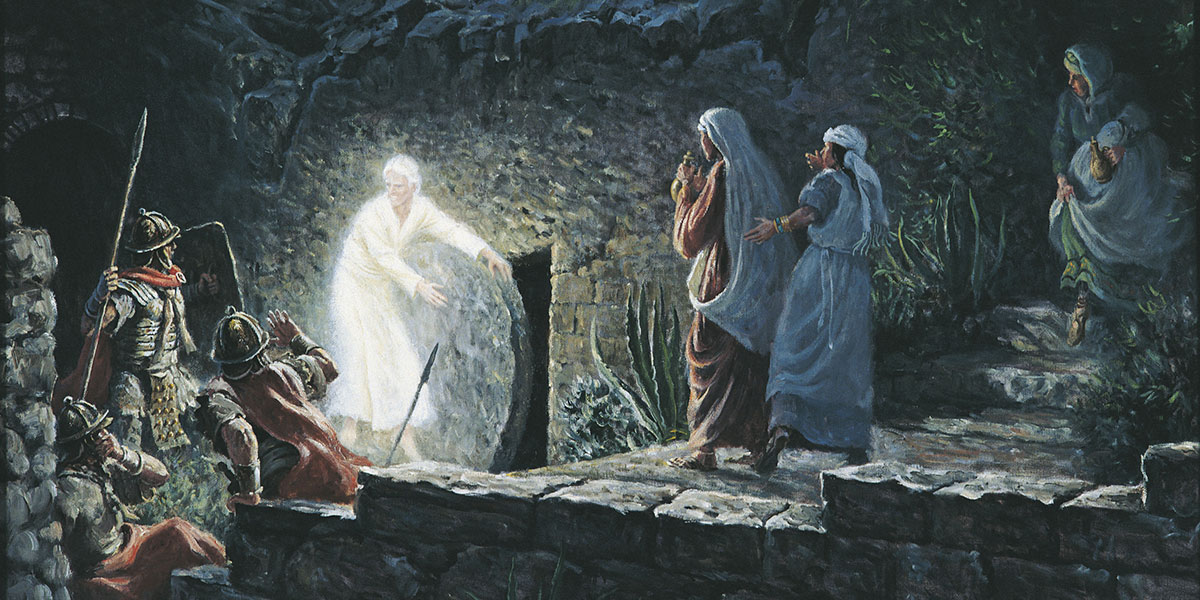 “The Empty Tomb” by Clark Kelley Price via lds.org
“As death hath passed upon all men, to fulfil the merciful plan of the great Creator, there must needs be a power of resurrection"

Christianity revolves around Christ’s resurrection from the dead, and every spring Christians around the world celebrate Easter to commemorate this event. The Bible has a lot a to say about this, with the word resurrection occurring 41 times in the New Testament. Still, there are some questions about the resurrection that the Bible does not answer. Thankfully, the Book of Mormon also has much to say about the most important event in world history, and its teachings clarify some of the points raised in the Bible.

One thing the Book of Mormon teaches is that the resurrection is not somehow isolated from the other parts of God’s plan of redemption.1 In the Book of Mormon, the Creation, Fall, birth of Jesus Christ, Atonement, Resurrection, and Judgment are all inextricably connected as parts of God’s plan for His children.2 The Book of Mormon teaches Christ's Resurrection as the way in which humanity can overcome our spiritual and physical deaths that were brought about by the Fall of Adam and Eve and our own transgressions, and return to the presence of God to be judged, in our bodies, according to our thoughts, words, and deeds.3 Alma 42:23 states that, “the atonement bringeth to pass the resurrection of the dead; and the resurrection of the dead bringeth back men into the presence of God ... to be judged according to their works.”

The Book of Mormon and Bible together clarify that everyone will be resurrected. Paul stated that, “as in Adam all die, even so in Christ shall all be made alive” (1 Corinthians 15:22), and that, “there shall be a resurrection of the dead, both of the just and unjust” (Acts 24:15). Yet some Christians do not believe that everyone will be resurrected. The Book of Mormon makes it beautifully clear that resurrection is universal:4 “The spirit and the body shall be reunited again in its perfect form; both limb and joint shall be restored to its proper frame, even as we now are at this time.” Ultimately, “this restoration shall come to all, both old and young, both bond and free, both male and female, both the wicked and the righteous; and even there shall not so much as a hair of their heads be lost” (Alma 11:43–44).

The Book of Mormon also elucidates the timing and stages of the Resurrection. The Book of Mormon reaffirms the biblical truth that Christ was the first person to be resurrected, but gives more information.5 It states that the “first resurrection” began with Christ, and consisted of the righteous people who lived between the time of Adam and Christ, as well as children and people who never heard the gospel (see Mosiah 15:21–25).6 Those people who are not righteous will be resurrected later (see Alma 40:19–20).7

In light of these general outlines, it is clear that not everyone will be resurrected at the same time within each of these periods.8 Alma wrote that, “whether there is more than one time appointed for men to rise it mattereth not; for all do not die at once, and this mattereth not. ... Therefore, there is a time appointed unto men that they shall rise from the dead.” But, “God knoweth all the times which are appointed unto man” (Alma 40:8–10).

Some people might think that the physical body is unimportant or even inherently evil and that a literal bodily resurrection is therefore unimportant. In contrast, the Book of Mormon teaches that physical resurrection is a fundamental part of the Plan of Salvation.9 According to Jacob, “as death hath passed upon all men, to fulfil the merciful plan of the great Creator, there must needs be a power of resurrection” (2 Nephi 9:6). Indeed, were it not for the resurrection, “our spirits must become subject to that angel who fell from before the presence of the Eternal God, and became the devil, to rise no more. And our spirits must have become like unto him, and we become devils, angels to a devil, to be shut out from the presence of our God” (2 Nephi 9:8–9).

It is also sometimes thought that, once Jesus ascended into heaven as reported in Acts 1:9, he left his body and transcended the earth. The appearance of Jesus at the temple in Bountiful after he had previously “ascended” (3 Nephi 15:1), make it clear that, as a resurrected being, he retained an exalted physical body. People could touch and “feel the prints of the nails in his hands and in his feet,” as reported in 3 Nephi 11:15. 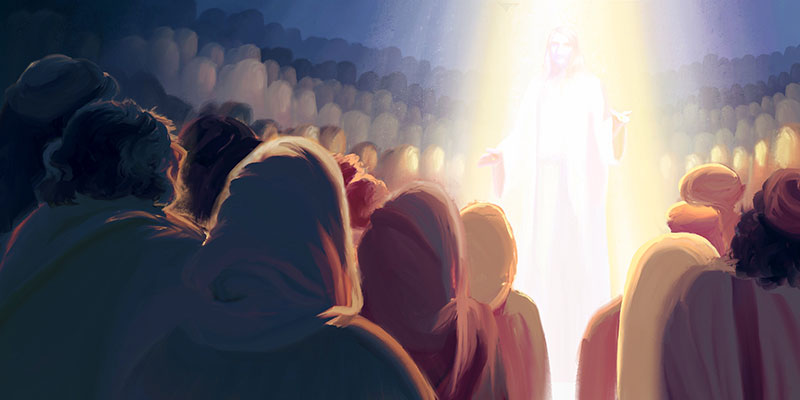 3 Nephi by Normandy Poulter and the BYU Virtual Scriptures group

These clarifications about the resurrection help us to better understand Christ and His essential role in our lives. It is only through the atonement of Christ that the resurrection is possible. As Aaron taught, “since man had fallen he could not merit anything of himself; but the sufferings and death of Christ atone for their sins, through faith and repentance.”10 Ultimately, Christ “breaketh the bands of death, that the grave shall have no victory, and that the sting of death should be swallowed up in the hopes of glory” (Alma 22:14).

The Book of Mormon reminds us that because of the resurrection of Christ, all humanity can overcome spiritual and physical death. It reaffirms that because of Christ’s atonement, every human being that has ever lived will be resurrected.11 It teaches valuable truths about the timing of the resurrection, and it celebrates Christ’s inauguration of the first resurrection. It asserts that the human body is important, temporally and eternally, and that Christ will redeem and resurrect the physical bodies of all mankind.12 In addition, it teaches us how we can escape from the grasp of Satan and may return to the presence of God to be resurrected with power and glory, becoming in that way even as He is.

Because of Christ’s resurrection, everything is different. Christ’s triumph over death and the grave means that the worlds of the living and the dead were very different places on Easter Sunday than they had been on Good Friday or had ever been before. Christ’s resurrection gives hope to us all and gives us the true freedom to choose eternal life through Jesus’s mediation of all men (2 Nephi 2:27). That is the freedom that Christians and people everywhere can and do rejoice in.

This KnoWhy was made possible by the generous support of Johnny and Verlanne Johnson.