Publishing of the Book of Mormon at Grandin Press via history.lds.org
“And he shall set up an ensign for the nations, and shall assemble the outcasts of Israel, and gather together the dispersed of Judah from the four corners of the earth.”

For many people, there is something about the Book of Mormon that draws them to it and makes them want to read it. Some people may feel drawn to the book even before they completely understand what it is. For most readers today, this simply involves getting a copy from missionaries or reading it online. But for one early reader, feeling drawn to the Book of Mormon meant walking hundreds of miles to find it before he even knew it existed.1

In the summer of 1829, a man named Thomas B. Marsh received a prompting from the Holy Ghost that likely seemed very strange.2 He later said that he felt an impression from the Spirit that he should make the nearly 400 mile journey from Boston, Massachusetts, to upstate New York, without any real idea of what he would find there.3 Thomas had tried for some time to find a church that corresponded to what he found in the Bible, but could not find what he was looking for.4 He came to believe that God would soon bring forth a new church that would teach what he called “the truth in its purity,” and he likely hoped that he would find just such a church on his journey.5

This was eventually what he found, but not without some difficulty. Thomas stayed in a town called Lima in western New York for three months without even knowing why he had come.6 He finally decided to turn back around to go home, when he unexpectedly found what he had been looking for. He spent the night with a family in a place called Lyonstown, New York.7 As he was leaving the next morning, the mother of the family asked if he had heard of a “Golden Book” found by a young man named Joseph Smith.8 Thomas told her he had never heard of the book, but was suddenly overwhelmed with a desire to know more about it.9

When he asked her more about this book, the woman told him he should go to Palmyra, a place he had just passed, and find a man named Martin Harris.10 Thomas later recalled, “I returned back westward and found Martin Harris at the printing office, in Palmyra, where the first sixteen pages of the Book of Mormon had just been struck off.”11 Thomas had arrived at Grandin’s printshop just in time to get a fresh copy of the first sixteen pages of the Book of Mormon.12 In 1829, it was common for printers to print a large page called a “proof” which would eventually be folded and cut to create 16 book-sized pages that would eventually be bound into the book, and it was one of these large sheets that Thomas took with him from the shop that day.13 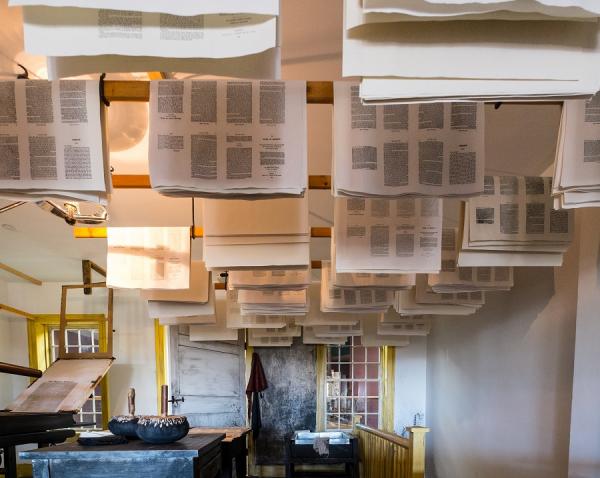 Seeing how interested Thomas was in the book, Martin Harris took him to meet Joseph Smith so Thomas could talk to him about the Book of Mormon.14 After spending two days talking to Joseph about the book, Thomas returned to Boston, where he showed the pages to his wife, Elizabeth. She also read them and knew they were the word of God.15 Based on this testimony, the family prepared to move west to be closer to the prophet.16 Their newfound faith took them from Boston to New York to Ohio to Missouri and Nauvoo. Although Thomas left the Church for a time, he did not forget his attraction to and testimony of the Book of Mormon. Eventually he returned, traveling all the way to Utah in 1857 to rejoin the Saints.17

Thomas’ story tells us something else as well. Sometimes, people must act on promptings from the Spirit that may seem utterly absurd, and they may not always know at the time why they are doing what they are feeling prompted to do. Thomas did not know what he would find in New York, but he went anyway, simply having faith that he should follow where the Spirit led, wherever that happened to be. As we seek to gain a testimony of the Book of Mormon, we should also go where the Spirit leads us, having faith that following the promptings we receive will take us where we need to go.

Whether we are familiar with the Book of Mormon or not, there is always something new to discover in its pages. As we follow the promptings of the Spirit, step by step, just as Thomas B. Marsh did, we too will be led to truths and insights that we may not have even known we were looking for.