Why did the Lamanites Break Their Treaty with King Limhi?

Lamanite Daughters by Minerva Teichert
“And are not they the ones who have stolen the daughters of the Lamanites?”

After Abinadi’s martyrdom1and Alma the Elder’s flight into the wilderness, the Lamanites were seen again in the borders of the land of Nephi (Mosiah 19:6). While king Noah fled with many of his men (19:11), some stayed with their women and entered into a treaty with the Lamanites, agreeing to pay “half of all they possessed” (19:15) in order to remain on their lands. Meanwhile, king Noah was put to a fiery death by some of his men who now wanted to return to their wives back in the land of Nephi (19:20). Noah’s priests, however, fled (19:21), and soon they abducted 24 Lamanite maidens “and carried them into the wilderness” (Mosiah 20:5). The abduction of these “daughters of the Lamanites” (20:1) was evidently so outrageous that their sudden disappearance “led to an immediate rupture in the treaty” that had just been established between the Lamanites and their recently conquered Nephite subjects (Mosiah 19:25–29).

The rupture was so severe that it “brought a military reprisal against the Nephites,” with the Lamanites launching an assault on Limhi’s people in the capital city of Nephi (Mosiah 20:6–11),2 whom the Lamanites assumed were connected with the taking of their daughters. Commenting on this passage, S. Kent Brown noted, “In the end, the [Lamanite] king’s decision to destroy the Nephite colony must have rested on a combination of considerations, one of which was his feeling of anger.”3 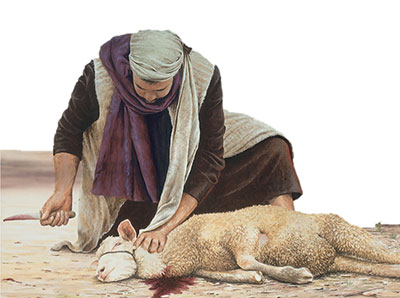 Readers can understand this anger on the part of the Lamanites. Not only were their daughters the victims of a sexual crime, but conquered subjects appeared to be rising in defiance. Moreover, in the ancient world, including in ancient Israel, oaths and treaty-covenants were of such importance that breaking one’s oath could literally become a matter of life and death. Since breaking a treaty sworn in God’s name was seen as nothing less than blasphemy, such oaths or covenants were often accompanied with threats of divine and temporal curses (including death) for breaking such (cf. Exodus 20:7; Deuteronomy 30:15–20; Ruth 1:16–17; 1 Samuel 20:13; Jeremiah 34:18–20; Zechariah 5:1–4; Daniel 9:11).4

In fact, the idiom for making a covenant in biblical Hebrew is literally to “cut a covenant” (kārat berît), and typically “animals were sacrificed, or cut, during ancient Near Eastern covenant-making ceremonies, in order to graphically demonstrate the penalty for not living up to the stipulations that were sworn to by the participating parties” (cf. Genesis 15:7–21).5

This would explain why the Lamanites reacted so strongly to what they thought had been a broken oath. Indeed, “they sent their armies forth; yea, even the king himself went before his people; and they went up to the land of Nephi to destroy the people of Limhi” (Mosiah 20:7). As explained by S. Kent Brown,

In general, when a treaty has evidently been broken, the question is, “How flagrant must a violation be before the sovereign could legitimately muster his military forces and attack the recalcitrant vassal?” The Lamanite king must have seen a series of misdeeds in the abduction of the young women. First, it was an act of stealing—a clear breach of law; the people there were not in a state of war or national tension. Second, any marriages that might result would consequently be illegal or, at the very least, extremely odious. Third, the kidnapping was evidence, as he perceived the matter, of the breaking of solemn pledges made only two years earlier. It would appear that he had no choice except to bring down the weight of the Lamanite army on the Nephite colonists.”6

That the priests of Noah committed a premeditated crime is evident from Mosiah 20:4, which records that they “laid and watched them” before the abduction. “The Hebrew idiom translated ‘lying in wait’ usually connotes premeditation and planning, implying that the priests may well have known of this place and the custom for young women to be there.”7 The textual clues in the Book of Mormon thus point to something more heinous than a mere crime of lust committed in the heat of the moment, which explains the severity of the Lamanite response. 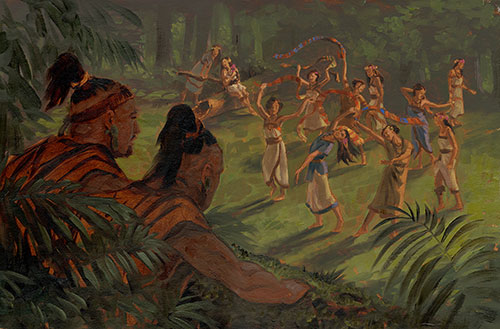 This story was perhaps included in the Book of Mormon for a number of reasons. It sets up the later accounts of the priests of Noah and their descendants (Alma 25:4, 12; 43:13). By understanding where those descendants came from (the captured Lamanite maidens) the rest of Mormon’s account of the Nephite-Lamanite wars makes more sense.

It also gives readers a glimpse into the role of women in the Book of Mormon. Women aren't mentioned much in the Book of Mormon, but when they are mentioned, they are depicted as more than just narrative props. They play active, important roles in the narrative.8 This is seen, for instance, in how the abducted Lamanite daughters later pled for the lives of their captors (who are called “their husbands”), revealing the complex dynamics of the characters’ relationships (Mosiah 23:31–35).

Finally, it shows how firmly anchored the Book of Mormon is in biblical culture. Even the Lamanites appear to have retained this honorable part of their cultural heritage. The harsh reaction of the Lamanites to a perceived broken oath makes perfect sense in light of these cultural practices of biblical oath-making.

S. Kent Brown, “Marriage and Treaty in the Book of Mormon,” in From Jerusalem to Zarahemla: Literary and Historical Studies of the Book of Mormon (Provo, UT: Religious Studies Center, Brigham Young University, 1998), 99–112.