Book of Mormon Central / KnoWhys
Where Did Joseph Smith Get His Ideas about the Physical and Spiritual Gathering of Israel? 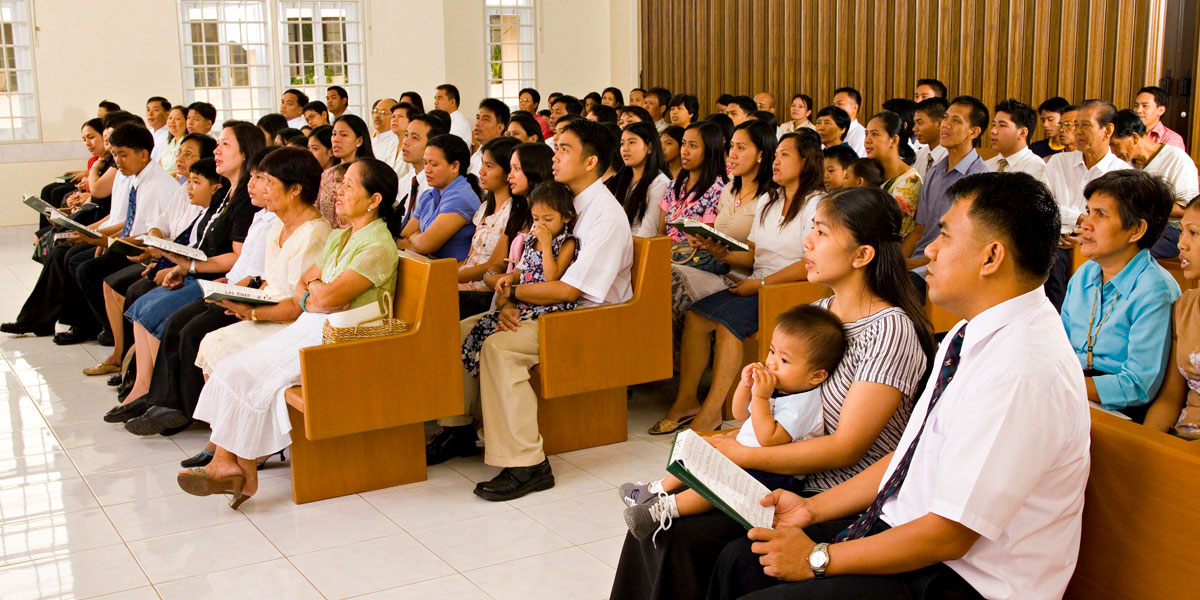 Singing Hymns in Sacrament Meeting via LDS Media Library
“And it shall come to pass in that day that the Lord shall set his hand again the second time to recover the remnant of his people which shall be left, from Assyria, and from Egypt, and from Pathros, and from Cush, and from Elam, and from Shinar, and from Hamath, and from the islands of the sea.”

In September 1830, the Lord told Joseph Smith that he was “called to bring to pass the gathering of mine elect” (Doctrine and Covenants 29:7).1 In a conference following this revelation, members were told “to begin the gathering of Israel, and a revelation was given to the Prophet on this subject.”2 The Latter-day Saints would eventually gather in a number of locations, including Ohio, Missouri, Illinois, and the Rocky Mountains.3 Yet the early saints also recognized that the gathering of Israel had a spiritual element in addition to the physical (Doctrine and Covenants 29:1–2, 7–8). The Book of Mormon may have helped Joseph to understand the connection between the spiritual and physical gathering of Israel.4

The house of Israel was scattered on several occasions. The first was in 721 BC, when the Assyrian empire scattered the northern ten tribes.5 The second was in 586 BC, when the Babylonians conquered Jerusalem and relocated many of the Jews.6 Finally, in AD 70, the Romans burned down the temple in Jerusalem and sold much of the Jewish population into slavery, as Nephi prophesied would happen (2 Nephi 25:14–15).7 However, Nephi also knew from Isaiah that someday God would “set up an ensign for the nations, and shall assemble the outcasts of Israel, and gather together the dispersed of Judah from the four corners of the earth” (2 Nephi 21:12; Isaiah 11:12).8 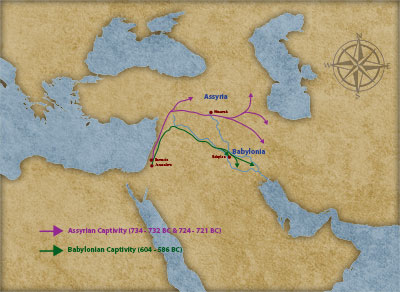 Map of the Scattering of Israel by Book of Mormon Central

The Book of Mormon makes it clear that the gathering will be a physical event, and that scattered Israel would “be gathered in from their long dispersion, from the isles of the sea, and from the four parts of the earth ... to the lands of their inheritance” (2 Nephi 10:8).9 Christ stated that He would “remember the covenant which I have ... covenanted with them that I would gather them together in mine own due time, that I would give unto them again the land of their fathers for their inheritance” (3 Nephi 20:29). These seem to be promises of a physical return to promised lands, and it is possible that this was one way that the idea of a physical gathering was planted in Joseph’s mind.10

However, the Book of Mormon speaks of the gathering of Israel in spiritual as well as physical terms. Lehi, for example, seemed to equate being gathered with coming to a knowledge of the Messiah. He stated that “after the house of Israel should be scattered they should be gathered together again ... or come to the knowledge of the true Messiah, their Lord and their Redeemer” (1 Nephi 10:13–14). He also taught that after the house of Israel was “scattered by the Gentiles” (1 Nephi 15:17) they would “come to the knowledge of ... their Redeemer and the very points of his doctrine, that they may know how to come unto him and be saved” (v. 14). These teachings imply that coming to Christ is the remedy for being “scattered by the gentiles.” 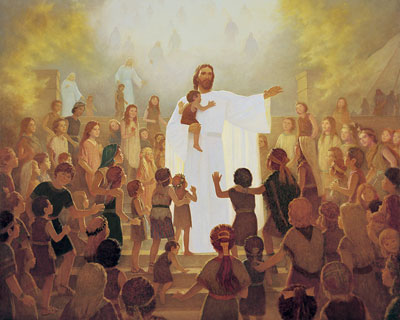 Jacob the son of Lehi similarly connected the spiritual and physical gathering, saying that the Jews would be “restored to the true church and fold of God; when they shall be gathered home to the lands of their inheritance, and shall be established in all their lands of promise” (2 Nephi 9:2, Isaiah 14:2). Christ Himself also made the connection between a physical and spiritual gathering. He said that “the dispersed of my people” would be prepared to “come unto me, that they may call on the Father in my name” (3 Nephi 21:27). He followed this by saying they would be “gathered home to the land of their inheritance” (3 Nephi 21:28). This seems to suggest a connection between coming unto Christ, a spiritual gathering, and being gathered to the lands of their inheritance, which is a physical gathering.

One connection between the physical and spiritual gathering is how the Book of Mormon and early church members used Isaiah 11:11.11 This verse states that “the Lord shall set his hand again the second time to recover the remnant of his people” from various countries, and the verse is alluded to four times in the Book of Mormon.12

On one of those occasions, Nephi stated that the Lord would set His hand again the second time not simply to restore his people from physical exile, but to spiritually restore them “from their lost and fallen state” (2 Nephi 25:17), showing the close connection between the physical and spiritual gathering. Emily M. Coburn Austin, an early church member, used this verse to refer to both physical and spiritual gathering.  And in Doctrine and Covenants 137:6, Joseph Smith directly connected this verse with baptism.13 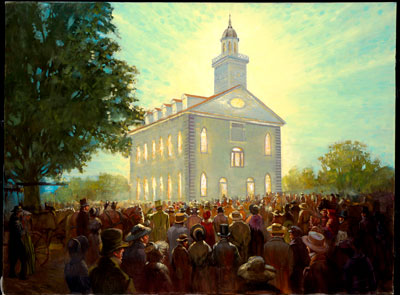 Like a Fire is Burning by Glen S. Hopkinson

It may be easy to think of the gathering as something that will happen far in the future. Yet the Book of Mormon and Doctrine and Covenants show that the spiritual gathering is taking place right now. The Prophet Joseph Smith taught, “All that the prophets … have written ... in speaking of the salvation of Israel in the last days, goes directly to show that it consists in the work of the gathering.”14 Those who desire to contribute to the spiritual salvation of Israel can assist in gathering scattered Israel through missionary work. The Lord told Ezra Thayre that if he opened his mouth to preach the gospel, it would “be filled, and you shall become even as Nephi of old” (Doctrine and Covenants 33:7–8). The same is true today.

Today, gathering people into the church will allow the whole world to be a gathering place. When Joseph Smith first revealed the area where the Saints would gather, a woman in Canada asked him if Jackson County would be big enough to gather all the people. Brigham Young answered this question by stating that “Zion will extend, eventually, all over this earth. There will be no nook or corner upon the earth but what will be in Zion. It will all be Zion ... We are going to gather as many as we can, bless them, [and] give them their endowments.”15

Participating in the spiritual gathering can transform lives in profound ways. Sister Austin said that participating in the gathering gave her a “life of benevolence to those who were unfortunate and needy; a life to bind up the broken-hearted and comfort the mourner; a life to teach by example, as well as precept; a life of charity; a life to show to the world that we had been with Christ, and learned of Him.”16 Realizing that the gathering has a spiritual element reminds the faithful that they can help gather scattered Israel, making their lives better for themselves and those around them.