Was Korihor Really an Atheist? 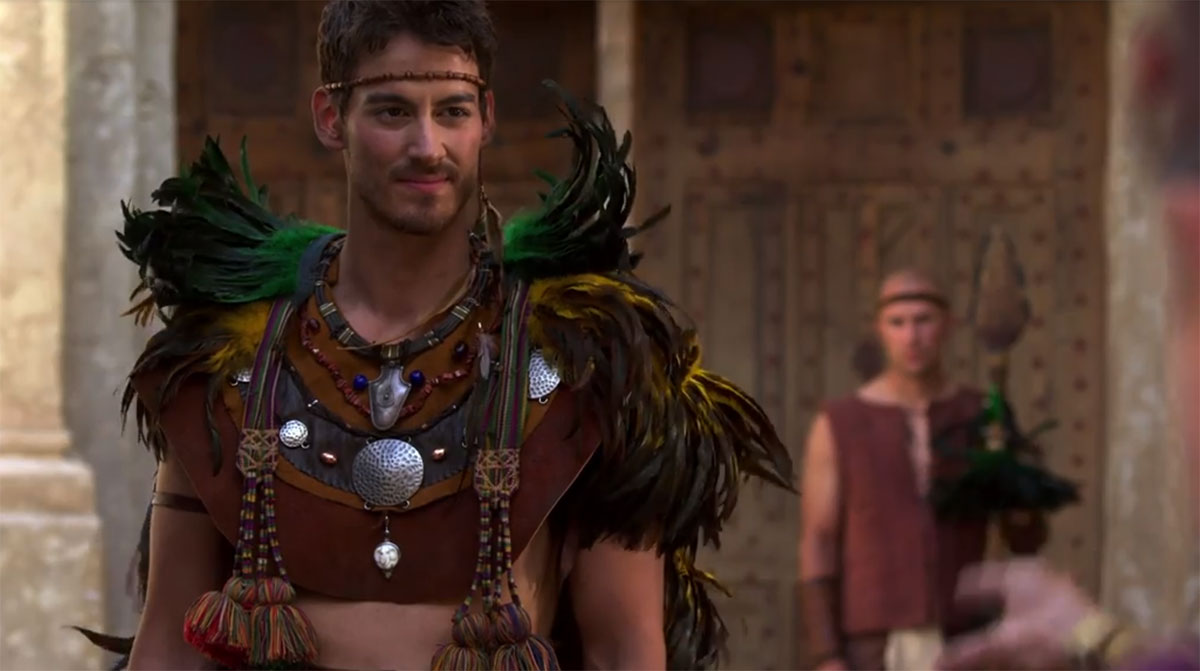 Image from “All Things Denote There Is a God” via Gospel Media Library
“And then Alma said unto him: Believest thou that there is a God? And he answered, Nay.”

Korihor is well-known as the infamous “Anti-Christ” who preached “against the prophecies... concerning the coming of Christ” (Alma 30:6). Among other things, Korihor taught that “there should be no Christ” (v. 12), and when asked by Alma if he believed in God, flatly answered in the negative (vv. 37–38).

Because of this, modern readers of the Book of Mormon are accustomed to describing Korihor as an atheist, or someone who denies the existence of God. Others have even argued that Korihor is an anachronistic figure in the Book of Mormon since he appears to espouse teachings that are congruent with Enlightenment philosophies such as Deism and other secular ideologies.1

The first point to address is whether atheism or the denial of the existence of divine or supernatural entities is a strictly modern phenomenon. In a recent monograph, the historian and Classicist Tim Whitmarsh argued at length that “atheism . . . is demonstrably at least as old as the monotheistic religions of Abraham, which means at least as old as the monotheism of Israel.”2 This, Whitmarsh observed, is seen clearly in ancient Greek sources.3 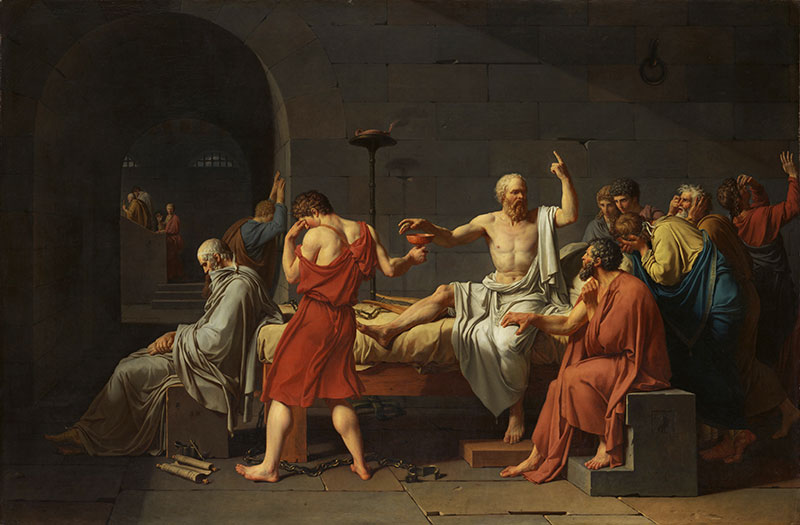 The Death of Socrates by Jacques-Louis David. Image via Wikimedia Commons.

Socrates was explicitly accused by his opponent Meletus of literally being atheos (“godless”4) and corrupting the youth of Athens with his bold new philosophy (Apology 26a–28a). The philosopher Epicurus would later be accused of being a “crypto-atheist” by his opponents because even though he acknowledged the existence of gods as perhaps abstract idealizations or “projections of human thought,” he nevertheless “denied all divine intervention in the running of the world, thus claiming to liberate his followers from fear of divine wrath.”5 (Several centuries later, Epicurean would become a pejorative term in Rabbinic Jewish sources for an apostate or religious deviant.6)

Turning to the biblical world, the ancient Psalmist recognized “the fool” who “hath said in his heart, There is no God” (Psalm 14:1). Rather than being a dunce or jokester, the “fool” in this verse is better understood as a scoundrel with no perception of proper religious sensibilities or ethics (Hebrew: nābāl). Much like the wicked of Psalm 10:3–7 who also exclaim “there is no God” (v. 4; Hebrew: ʾêyn ʾelōhîm), the fool in Psalm 14 denies God’s existence by committing “abominable works” (v. 1) and “all together becom[ing] filthy” with sin and wicked acts.

Commentators on these verses often speak of them as showing signs of “practical atheism” instead of theoretical or ideological atheism since the fool described therein is consciously refusing to obey God’s commandments as if His power was “useless and inefficient” to exact justice or retribution.7

In addition to questioning the existence or intervention of God(s) in mortal affairs, some ancient people also expressed doubt or skepticism at the idea of the afterlife. The Song of Intef from ancient Egypt reflects serious skepticism towards the survival of the human soul after death. In language reminiscent of the biblical book of Ecclesiastes, part of the song reads:

One generation passes away and the next remains,
Ever since the time of those of old.
The gods who existed before me rest (now) in their tombs,
And the blessed nobles also are buried in their tombs.
But as for these builders of tombs,
Their places are no more.
What has become of them?

So rejoice your heart!
Absence of care is good for you;
Follow your heart as long as you live.
Put myrrh on your head,
Dress yourself in fine linen,
Anoint yourself with the exquisite oils
Which are only for the gods

Let your pleasures increase,
And let not your heart grow weary.
Follow your heart and your happiness,
Conduct your affairs on earth as your heart dictates,
For that day of mourning will (surely) come for you.
The Weary-Hearted does not hear their lamentations,
And their weeping does not rescue a man’s heart from the grave.8 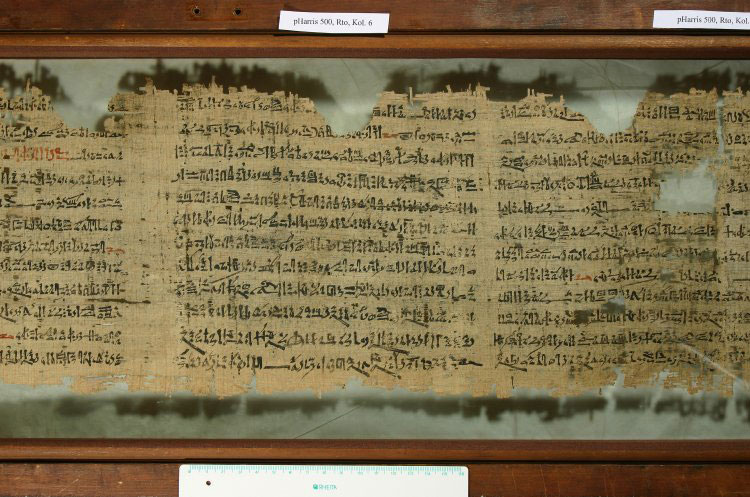 18th Dynasty Papyrus containing Harper's Song from the Tomb of Intef. Image from the British Museum via ancient.eu

The listener [of the song] is encouraged to enjoy life while he can, because the existence of an afterlife is uncertain and even a well-provisioned tomb cannot guarantee a person’s survival. Earthly existence is acknowledged as transient, and there is no certainty about human life. Funerary preparations do not last and are therefore useless, and since the dead do not return to inform the living what they need, then all the provisioning of the tomb is futile. This contrasts markedly with the traditional view that a person could expect to attain a blessed afterlife, provided that he was morally and virtually prepared and had made the necessary arrangements for his funeral and mortuary maintenance.9

Ancient “atheism,” then, could take the form of denying that God(s) existed, but it might also entail redefining the nature of God(s) into something radically different from typical beliefs, or denying the operative power of God(s) in the cosmos, or consciously rebelling against the God(s), or undermining accepted ideas of piety by refusing to worship a given deity in the state religion.10 Not just denying the existence of God(s) but “failing to exhibit the proper religious stance towards the gods” could qualify one as an “atheist” in the ancient world.11

With this ancient context in mind, we can qualify what kind of “atheist” Korihor may have been by looking again closely at what he specifically taught. Reading Alma 30 closely, it is clear that Korihor’s rhetoric was often given to exaggeration, ridicule, name-calling, vagueness, and overconfidence:

In addition, it is crucial to note that Korihor actually acknowledged the reality of “supernatural” beings such as spirits, angels, and even the devil. As Korihor himself confessed, “The devil hath deceived me; for he appeared unto me in the form of an angel, and said unto me: Go and reclaim this people, for they have all gone astray after an unknown God. And he said unto me: There is no God; yea, and he taught me that which I should say” (v. 53).

Logically, granting the ability for people to go after an “unknown God” necessarily presupposes the existence of some other knowable and unknowable God(s) to begin with. As such, the devil’s statement to Korihor that “there is no God” can plausibly be read as a declaration of practical (as opposed to theoretical) atheism much like the atheism found in Psalm 10:4 and 14:1. In other words, the devil was not claiming that no god(s) existed whatsoever, but rather that specifically the Nephite God, Jehovah, with his strict commandments, laws, ordinances, and statutes did not exist. 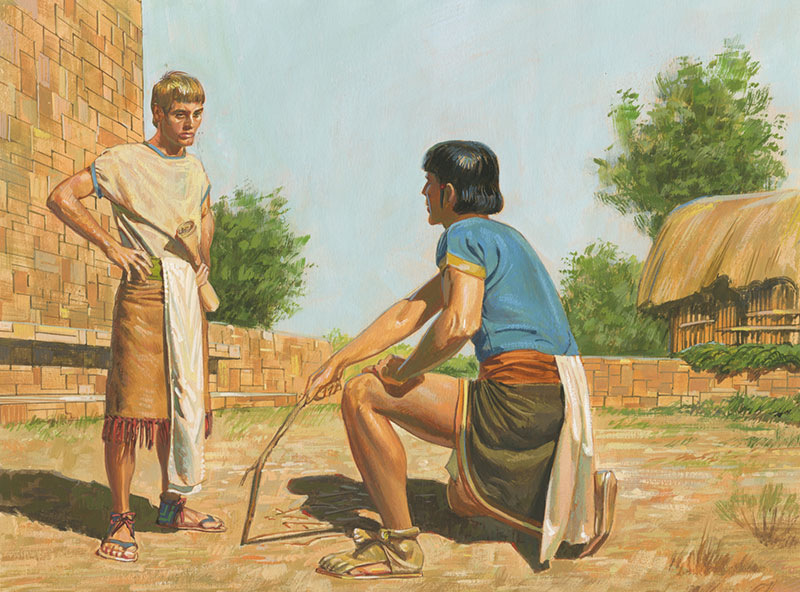 Korihor admitting that he knows there is a God by Jerry Thompson. Image via Gospel Media Library.

Indeed, when pressed, Korihor waffled by openly conceding, “I do not deny the existence of a God, but I [personally] do not believe that there is a God” (Alma 30:48), and after he was struck dumb, Korihor finally admitted that he “always knew that there was a God” (v. 52). By denying God’s operative power in the world and in the affairs of mortals, including God’s entry into history to perform an infinite Atonement, and by insisting that there was no such thing as divine judgement or divinely mandated commandments, Korihor was teaching the kind of practical atheism that is mentioned and condemned in the Hebrew Bible.

The prophet Alma was able to refute Korihor by appealing to his own experience (vv. 32–35), the scriptures (v. 44), and nature (v. 44) as witnesses against his accuser (v. 45). The preponderance of this evidence allowed Alma to confidently declare, “I know there is a God, and also that Christ shall come, … [and] that there is a Supreme Creator” (vv. 39, 44). As if to put a fine point on his refutation of Korihor’s practical atheism, and to fully demonstrate the reality and operation of God’s power among mortals, Alma capped things off by striking Korihor dumb (vv. 49–50). With no other way to refute God’s existence, either theoretically or practically, Korihor finally admitted that he “always knew that there was a God” (v. 52). When confronted with Alma’s stunning supernatural power, the real Korihor came clean.

Reading the contest between Alma and Korihor in an ancient context such as the one presented above helps clarify what Korihor really taught. It also better equips latter-day readers to recognize when similar teachings arise in the world today. Elder Ulissess Soares taught how the Book of Mormon provides several examples of those who allowed the Adversary to gain power over them and “ended up becoming confused and even destroyed, like Nehor, Korihor, and Sherem.” He warned, “We need to be alert to this danger. We cannot allow ourselves to be confused by popular messages that are easily accepted by the world and that contradict the doctrine and true principles of the gospel of Jesus Christ.”13

John W. Welch, “The Trial of Korihor,” in The Legal Cases in the Book of Mormon (Provo, UT: Brigham Young University Press, Neal A. Maxwell Institute for Religious Scholarship, 2008), 273–300. 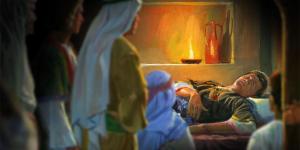 What Do We Learn About Ministering from the Account of Sherem?
October 3, 2019