Is the Book of Mormon Like Any Other Nineteenth Century Book? 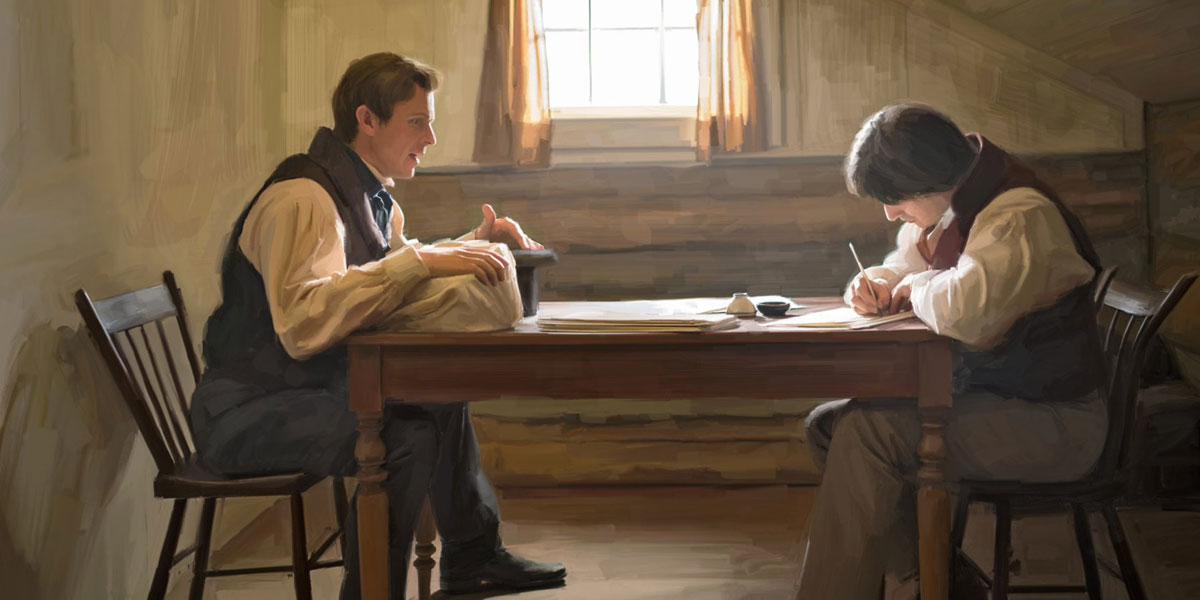 Joseph Smith translating the Book of Mormon via lds.org
“By small and simple things are great things brought to pass; and small means in many instances doth confound the wise”

Did Joseph Smith plagiarize the Book of Mormon?

When the Book of Mormon was published in March 1830, it was greeted by many skeptics who sought an explanation for its existence other than the account offered by Joseph Smith. One early critic, Alexander Campbell, confidently affirmed that “never was a book more evidently written by one set of fingers, nor more certainly conceived in one cranium since the first book appeared in human language” than the Book of Mormon. “If I could swear to any man’s voice, face or person, assuming different names, I could swear that this book was written by one man,” sneered Campbell. “And as Joseph Smith is a very ignorant man and is called the author on the title page, I cannot doubt for a single moment that he is the sole author and proprietor of it.”1

But, as Daniel C. Peterson has observed, early critics of the Book of Mormon quickly encountered a difficult problem to reconcile. “The fact was . . . that the ‘perfect ignoramus’ Joe Smith had actually produced a substantial and complex book. Moreover, he and his book were acquiring a solid and numerous following. How could this be accounted for? How could someone whose ‘mental powers’ were ‘extremely limited’ have produced a lengthy book and founded a growing new religious faith?”2 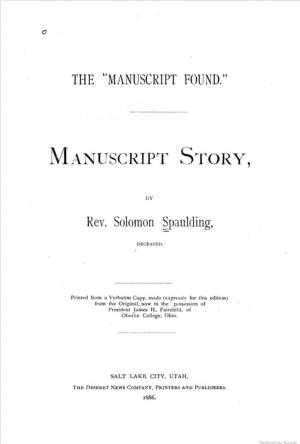 Not content with attributing sole authorship of the Book of Mormon to Joseph Smith, early anti-Mormons quickly looked to other individuals as potential co-conspirators and to other nineteenth century texts as possible sources of plagiarism. The first and most widespread theory among skeptics was what is today sometimes called the Spalding-Rigdon Theory for Book of Mormon authorship. According to this theory, Sidney Rigdon secretly gave Joseph Smith a copy of an unpublished manuscript written by a certain Solomon Spalding (or Spaulding). Joseph then, the theory goes, palmed off this manuscript with his own additions as the Book of Mormon.

Popularized by E. D. Howe in his book Mormonism Unvailed [sic],3 the Spalding-Rigdon Theory effectively became the standard skeptical explanation for the origins of the Book of Mormon for the remainder of the nineteenth and into the twentieth century. It proved so influential that early Latter-day Saint missionaries and defenders of the faith spent time specifically addressing it.4 This explanation, however, quickly lost favor when Spalding’s original manuscript was recovered in 1884 and yet was seen to bear little resemblance to the Book of Mormon.5

Even Joseph Smith’s deeply skeptical biographer Fawn Brodie dismissed the theory as resting on extremely tenuous evidence.6 Despite recent attempts to resurrect the theory,7 “serious students of Mormonism . . . [treat] the Spalding theory as little more than a historical curiosity,” not a viable explanation for the origins of the Book of Mormon.8 The fact is that “the Spalding theory has been a dead issue” for well over a century,9 and is “not credible enough to base a theory of Book of Mormon authorship on.”10

Ethan Smith’s View of the Hebrews 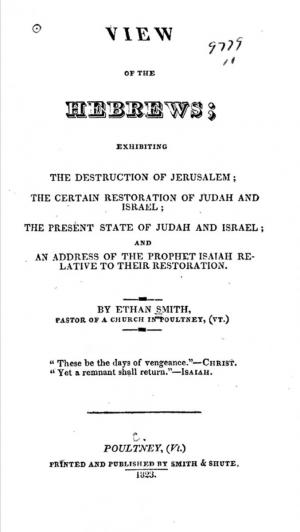 The title page of Ethan Smith's View of the Hebrews.

With the decline of the Spalding-Rigdon Theory arose alternative theories to take its place. In 1902, the American psychology and religion scholar Isaac Woodbridge Riley suggested that Joseph Smith derived the content of the Book of Mormon, in part, from the book View of the Hebrews by Ethan Smith (no relation to the Prophet).11 Published in two editions in 1823 and 1825, View of the Hebrews attempted to demonstrate that the Native Americans were descendants of the lost tribes of Israel.12 Already a popular theory in his day, Ethan Smith offered interpretations of biblical passages and parallels between Native American and Hebrew cultures as further evidence for this claim.13

Although Riley only mentioned Ethan Smith’s book in passing in his own work, subsequent authors drew more sustained attention to View of the Hebrews as a potential source of plagiarism.14 The prominent Book of Mormon scholar B. H. Roberts, in what was essentially an exercise in playing “devil’s advocate,”15 himself listed potential parallels between the Book of Mormon and View of the Hebrews.16

As with the Spalding-Rigdon Theory, however, there are serious problems with the theory that Joseph Smith plagiarized View of the Hebrews. For starters, as even proponents of the theory have admitted, there is no direct evidence that Joseph Smith was ever familiar with the contents of View of the Hebrews during the translation of the Book of Mormon.17 In addition, none of Joseph Smith’s contemporary adversaries ever considered View of the Hebrews as a potential source of plagiarism, which would indicate that the supposed parallels between the two sources aren’t as readily obvious as some have suggested. Finally, Joseph Smith, while acting as editor of the Times and Seasons, approvingly republished a quotation from View of the Hebrews.18 “If the Prophet had originally used Ethan Smith’s book to help him write the Book of Mormon, almost certainly he would not have later published a quote from it to illustrate a point, since plagiarists normally keep their sources a secret.”19

Besides all of this, John W. Welch and John Gee have pointed out significant stylistic and conceptual differences between the Book of Mormon and View of the Hebrews.20 The Church itself considers the parallels between the two so weak and non-threatening that its flagship university, Brigham Young University, published an edition of View of the Hebrews in 1996 for all to freely examine and compare the two books.21

Out of the multitude of ideas and events in the Book of Mormon and in the View of the Hebrews there are several broad similarities, but many more significant differences; and a correlation at some point between two things does not prove one caused the other. If Joseph Smith were going to borrow material to help him write the Book of Mormon, there were certainly sources other than Ethan Smith’s book to which he could have gone. Everything that is common or even vaguely similar between the Book of Mormon and the View of the Hebrews could have been borrowed more easily from the Bible or from prevailing beliefs at that time.22 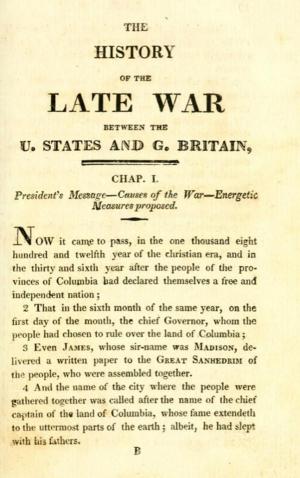 In recent years, another theory for the origins of the Book of Mormon has emerged. This new theory posits that “Joseph [Smith] most likely grew up reading a school book called The Late War by Gilbert J. Hunt and it heavily influenced his writing of The Book of Mormon.”23 Published in 1816, The Late War Between the United States and Great Britain gave an account of the War of 1812 that was intended to be an educational textbook for schoolchildren. To support the idea that Joseph Smith drew from this book in fabricating the Book of Mormon, some authors have pointed to “similarities” and parallels between the two books, including “over 100 rare phrases that bind The Book of Mormon to The Late War.”24

While this theory has become popular in some online circles, it suffers from many problems. Most glaring is the fact that, as demonstrated by recent statistical analysis, the “similarities” and linguistic parallels between the Book of Mormon and The Late War are easily explainable as shared imitation of the language of the King James Bible, and not direct literary dependence.25 Beyond this, others have pointed out that many of the parallels typically listed between the two books are illusory or otherwise rather weak.26

As Benjamin McGuire observed, the surface-level linguistic similarities between the Book of Mormon and The Late War also fail to explain the fact that “Hunt [merely] wanted to create a text that read like scripture as a marketing tool. In this way we get a lot of biblical sounding text. The Book of Mormon, on the other hand, doesn’t just use biblical language, it engages biblical issues – it asks questions about morality, about agency, about creation. It ponders the meaning of writing and reading. It describes religious experience.”27

These problems with the Late War Theory indicate that in all likelihood, rather than the Book of Mormon flagrantly plagiarizing Hunt’s work, the two books emerged alongside others in a shared early American literary culture.28

Writing in 1951, Elder John A. Widtsoe made this observation: “Unbelievers in Joseph Smith’s story have not been able to agree on any one explanation. It has even been necessary by some writers to change the explanation they first proposed. This unsuccessful, changing search is of itself an evidence of the truth of the Prophet’s own story.”29 In other words, if the Book of Mormon were in fact the result of clumsy plagiarism of a contemporary nineteenth century source, Joseph Smith’s learned critics should have little problem exposing it as such. Their inability to come to a consensus as to how Joseph pulled off a supposed hoax like the Book of Mormon is problematic for their argument.30

“This book,” declared Elder Jeffrey R. Holland, speaking of the Book of Mormon,

has been examined and attacked, denied and deconstructed, targeted and torn apart like perhaps no other book in modern religious history—perhaps like no other book in any religious history. And still it stands. Failed theories about its origins have been born and parroted and have died—from Ethan Smith to Solomon Spaulding to deranged paranoid to cunning genius. None of these frankly pathetic answers for this book has ever withstood examination because there is no other answer than the one Joseph gave as its young unlearned translator.31

That the Book of Mormon stands strong after nearly 200 years of critical examination should bolster the confidence of those who accept it as inspired scripture and an authentic ancient record translated by the gift and power of God. Likewise, that skeptics have yet to offer a convincing counter-explanation for the existence of the Book of Mormon is strong evidence for its authenticity. This has, remarkably, not stopped dogmatic skeptics from “look[ing] everywhere for explanations [for the Book of Mormon] except to the one explanation” that was offered by Joseph Smith.32

Arguments that the Book of Mormon was derived from other nineteenth century books do not adequately explain its features—for example, its astounding narrative complexity, literary elegance, profound theology, and authentic ancient characteristics. Nor do such arguments account for the circumstances of its coming forth, including its rapid dictation, lack of revisions, and the testimonies of those who handled the plates and beheld the angel. The weight of the combined evidence affirms that the Book of Mormon is unlike any other nineteenth century work, and is an authentic ancient text. The testimony of the Holy Ghost given to sincere seekers ratifies this truth (Moroni 10:4–5).

This KnoWhy was made possible by the generous support of the Dow and Lynne Wilson family.

Louis Midgley, Who Really Wrote the Book of Mormon? The Critics and Their Theories,” in Book of Mormon Authorship Revisited: The Evidence for Ancient Origins, ed. Noel B. Reynolds (Provo, UT: FARMS, 1997), 101–140.

Daniel C. Peterson, “Editor's Introduction: ‘In the Hope That Something Will Stick’: Changing Explanations for the Book of Mormon,” FARMS Review 16, no. 2 (2004): xi–xxxv.