How Are Oliver Cowdery’s Messenger and Advocate Letters to Be Understood and Used? 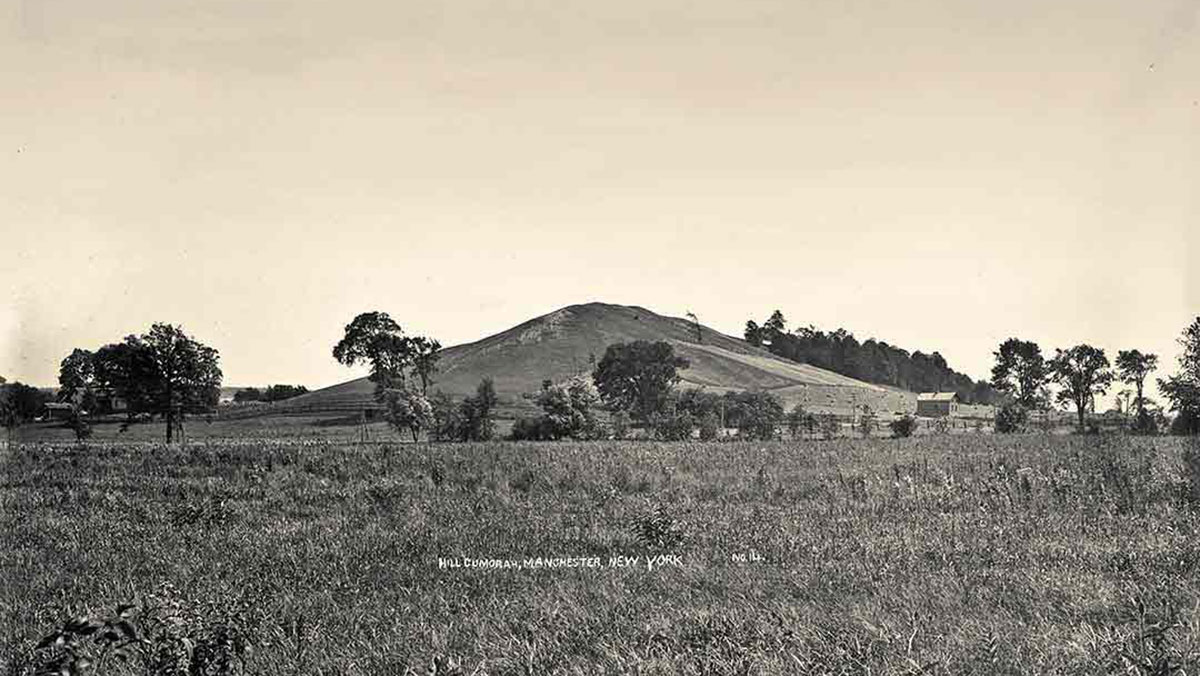 “The Hill Cumorah” by George Anderson via history.lds.org
“I made this record out of the plates of Nephi, and hid up in the hill Cumorah all the records which had been entrusted to me by the hand of the Lord, save it were these few plates which I gave unto my son Moroni.”

Oliver Cowdery is undoubtedly one of the most important figures in the early history of The Church of Jesus Christ of Latter-day Saints. While the Church was headquartered in Kirtland, Ohio, Oliver served as the editor of the Church’s newspaper Latter Day Saints’ Messenger and Advocate from October 1834 to May 1835 and again from April 1836 to January 1837.1

During his early tenure as editor of the paper, Oliver wrote a series of letters to William W. Phelps, another prominent Mormon figure, detailing the early history of Joseph Smith, the coming forth of the Book of Mormon, the restoration of the gospel, and the gathering of Israel. These letters, eight in total,2 were written partly to combat anti-Mormon opposition and partly to increase the faith of Church members by publishing “a more particular or minute history of the rise and progress of the church of the Latter Day Saints [sic]; and publish, for the benefit of enquirers, and all who are disposed to learn.”3

Although the Prophet Joseph Smith began composing his personal history in 1832,4 this early draft remained unpublished during his lifetime, effectively making Oliver’s letters in the Messenger and Advocate the earliest public history of Joseph Smith, the coming forth of the Book of Mormon, and several other related topics.5 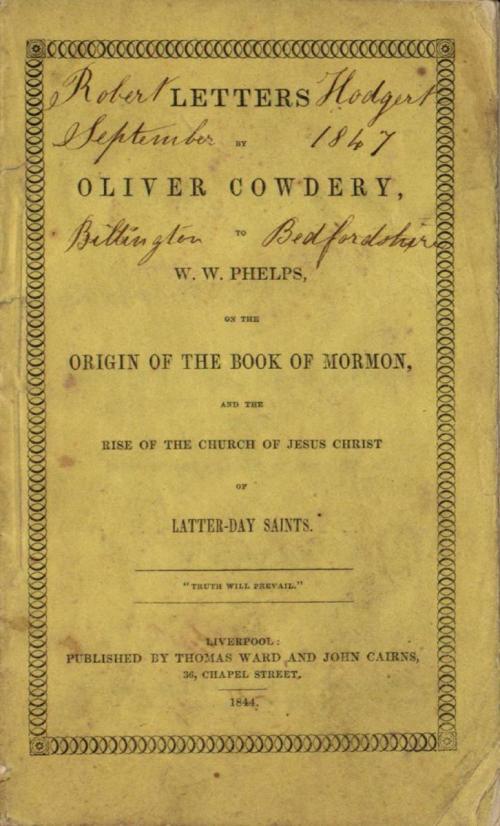 The letters by Oliver Cowdery. Image via BYU Harold B. Lee Library

The impact and authority of Oliver’s letters can be measured by several factors. First, “there is no evidence that Joseph Smith assigned Cowdery to write the letters.”6 Second, the Prophet gave some support by providing Oliver details about “the time and place of [his] birth” and information about his adolescence that would help Oliver correct anti-Mormon misconceptions as a main concern,7 but it is unclear how much information Joseph supplied about other things.

Third, Joseph was impressed enough with Oliver’s letters that when he commissioned his 1834–1836 history, copies of them were included. But they were included as a block and without any corrections or clarifications. “The transcription of [these] letters into [Joseph Smith’s] history was evidently conceived in terms of the entire series, not as a piecemeal copying of the individual letters.”8 The men tasked with composing this early history were Frederick G. Williams, Warren Parrish, and Oliver himself, making the inclusion of the Cowdery letters an understandable move.9

Finally, Oliver’s letters were republished on multiple occasions by Church presses in both North America and Europe, making them effective missionary tools in early Mormon proselytizing efforts, but again without the benefit of any improvements or the supervision of Joseph Smith.10

Even though Oliver’s history was undoubtedly popular among early Mormons, historians recognize that it does not tell the whole story and cannot be taken entirely at face value. For instance, Letter III provides a retelling of Joseph’s youth which includes the religious excitement that caused Joseph to reflect on where he could turn for answers to his soul-wrenching questions,11 but then, Oliver omits any description of Joseph Smith’s First Vision in 1820.12

At first glance, Oliver’s narrative “appears to be leading up to the story of the First Vision,”13 but then it abruptly skips the First Vision and instead places the religious excitement not between the years 1818­–1820, as Joseph himself would do in his 1838 history,14 but in the year 1823 with the visitation of Moroni.15 Furthermore, instead of depicting Joseph as praying to God in the woods in consequence of this turmoil in 1820, as Joseph made clear in his own official history,16 Oliver describes him as praying in his bedroom.17

Besides these errors, Oliver includes lengthy quotations of the angel Moroni to Joseph Smith which are unlikely to be a verbatim recapturing.18 Given that this depiction of Moroni’s interviews with Joseph between 1823–1827 was published some years after their occurrence, and given the fact Oliver was not present during these visits, it is more likely that, true to his extravagant literary style, Oliver somewhat embellished his account to enhance its readability and appeal.19 This is not to say Oliver’s letters should be dismissed wholesale, only that they should be used carefully in historical reconstructions. 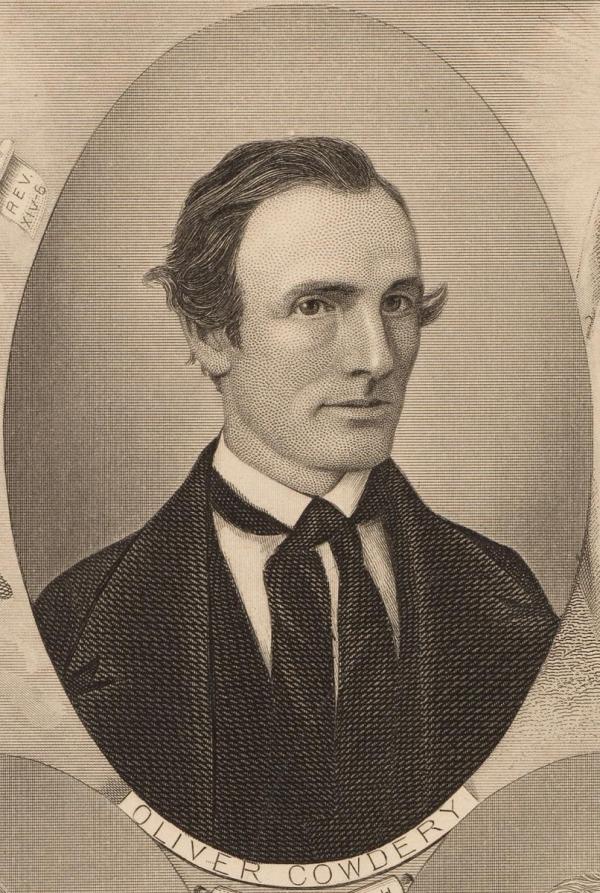 Portrait of Oliver Cowdery via the Joseph Smith Papers

Oliver Cowdery was undeniably an important witness to the foundational events of the Restoration and his letters as published in the Messenger and Advocate offer a glimpse into these events. He was intimately familiar with the production of the Book of Mormon, having written it “with [his] own pen . . . as it fell from the lips of the Prophet Joseph, as he translated it by the gift and power of God, by the means of the Urim and Thummim, or as it is called by the book, Holy Interpreters.”20 And, although Oliver fell into apostasy for a period, he never denied his testimony and returned to the Church a few years before his death.21

While Oliver’s letters certainly convey his moving personal testimony of the authenticity of the Book of Mormon, they don’t definitively establish other matters for which there is contrary historical evidence or which remain open to discussion. This includes Book of Mormon geography. While it is true that Oliver understood the hill near Palmyra, N.Y. where Joseph retrieved the plates to be the same hill Cumorah described in the Book of Mormon where the Nephites and the Jaredites perished,22 it is unknown where Oliver got this idea. Was it from assumptions he made based on his reading of the Book of Mormon, from prophetic insights offered by Joseph Smith, or from some other source?23

In any case, unlike the Lectures on Faith in 1835, or Joseph's Smith's epistles to the Church in 1844, or the Pearl of Great Price in 1880, or even other texts attributed to Oliver such as the “Declaration of Government and Law" (now D&C 134),24 none of Oliver Cowdery's letters from this series, including Letter VII, were ever canonized as binding revelation.25 As many comments by Church leaders have made clear, the Church has no official position on the geography of Book of Mormon events.26 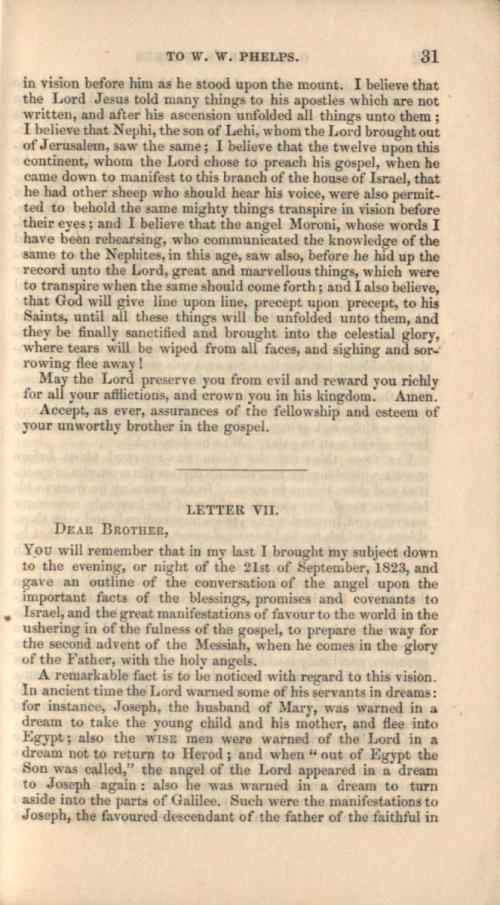 While it is clear that Joseph said he was visited by the angel Moroni on the west side of the unnamed hill near his family’s Manchester, N.Y., home,27 that is a separate matter from how far and wide Moroni had wandered during the 36 or more years after the final battle in A.D. 385 before he deposited the plates in A.D. 421 in their designated resting place.

So, Oliver’s Messenger and Advocate letters need to be approached cautiously. Although they are not entirely free from error and embellishment, they are, of course, quite valuable to students of early Mormon history. They provide many important insights into the translation of the Book of Mormon and the restoration of the priesthood, matters with which Oliver was personally acquainted. Most of all, these letters are intended to be read and used for increasing faith in the gospel of Jesus Christ and in affirming belief in the Book of Mormon as the word of God.